Accessibility links
Review: 'Little Gods,' By Meng Jin Meng Jin's new novel shows us a complex woman through the eyes of her husband, her daughter, and her daughter's nanny — all of whom see different, sometimes contradictory facets of her character.

'Little Gods' Reminds Us Some Questions Are Better Left Unasked

'Little Gods' Reminds Us Some Questions Are Better Left Unasked 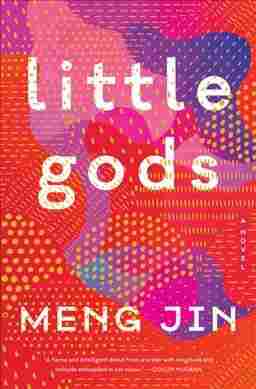 Meng Jin's Little Gods is one of the most complex character studies I've ever read. Each of us present a different version of ourselves to different people, and Jin looks at this performance with a clinical eye, showing us what it looks like through the perspectives of different characters. Steeped in trauma, loss, and imperfect love, Little Gods is a novel about performing the self, filtered through academia, abandonment, and migration. This is a smart and emotionally devastating novel. It is also a gritty narrative that reveals the inner universe of two women in detail, while still leaving us full of questions.

Su Lan was a good student who went on to become a brilliant physicist. However, her love for math and theory was as strong as her dislike of people and institutions; she preferred solitude to company and never found her place in academia. She married a man she didn't love, because she thought that was what she deserved, and later gave birth to a girl, alone in a Beijing hospital. The child changed her life and pushed her to migrate to the US. Seventeen years later, Su Lan dies and her daughter, Liya, returns to China to unravel the mystery of her mother. What she finds is a woman full of pain and contradiction, who did everything she could to distance herself from her past.

Little Gods is a story of migration, of movement. Su Lan is always running from something. She moves away from her family, runs away from men, leaves China for the US, and abandons a few PhD programs. With each move, a small piece of her personality comes to light. She is a nonconformist looking for a future as much as she's looking to distance herself from the past.

Steeped in trauma, loss, and imperfect love, 'Little Gods' is a novel about performing the self, filtered through academia, abandonment, and migration.

The most interesting element of this novel is that Jin shows us Su Lan through other people. Su Lan doesn't tell her own story; instead, we get versions of her from her husband, Liya, and Zhu Wen, the woman who helped her raise Liya. The versions are different, sometimes contradictory, but they reveal the way in which we construct ourselves in relation to others.

Zhu Wen is the first one to speak. She introduces readers to Su Lan's constant (re)construction:

She was not interested in her beauty. In fact she did not think herself particularly attractive, and believed her features to be small and inoffensive, nothing remarkable on their own. Rather, she felt the strength of her face was its neutrality; like the white walls of her room, it functioned as a blank palette that was enhanced (rather than made garish) by makeup and jewelry. In this way she conceived her beauty, like her other attributes, not as an inherent quality but rather as another aspect of her self-invention the hard-earned result of her own work and will.

While Zhu Wen sees a strong woman obsessed with reinventing herself, Su Lan's husband, who struggles with his own past and abandoned her after she became pregnant, sees her with different eyes from the start:

That day, when she finally appeared, she seemed to leave behind her a shimmering wake as if each molecule were bursting into life, the very air around her teeming with the energy of invisible particles proliferating toward infinity. To say she took my breath away would be incorrect. Watching her inhabit space — beholding her — was like watching worlds unfold.

Finally, Liya, who must reconcile the mother she knew with the woman she was back in China, comes full circle and proves that Su Lan was right about a lot of things and wrong about many others. For example, before becoming pregnant, Su Lan tells her husband: "I don't ever want to become a mother, I can't bear the possibility that any person might feel about me the way I feel about my mother." Seventeen years later, her daughter demonstrates how our worst nightmares can easily become true:

I never stopped loving my mother. Not exactly. A little pin fell out of the contraption of my love for her; bit by bit it fell apart, until one day I discovered she was my enemy, I never ceased to feel strongly — strongest — about her. Even long after the strength of emotion was no longer adoring, my mother retained an ability to extract, with a word, a glance, a simple tone of voice, the well of everything irrational inside me.

Little Gods is a novel about the ways we adapt to our surroundings as we move through our own stories. It explores the inescapable impact of the past on the present and shows that running from what we dislike often pushes us into more of the same. Ultimately, this is a story that, without pulling punches, reminds us of two things: First, we can never outrun ourselves. And second, some questions are better left unasked — because getting answers can be much worse than not knowing.