Accessibility links
From Little-Known Candidate For Congress To The Spotlight: Who Is Robert Hyde? Hyde says he was joking when he messaged an associate of Rudy Giuliani that he was tracking former U.S. Ambassador Marie Yovanovitch. Now, U.S. and Ukrainian authorities are investigating. 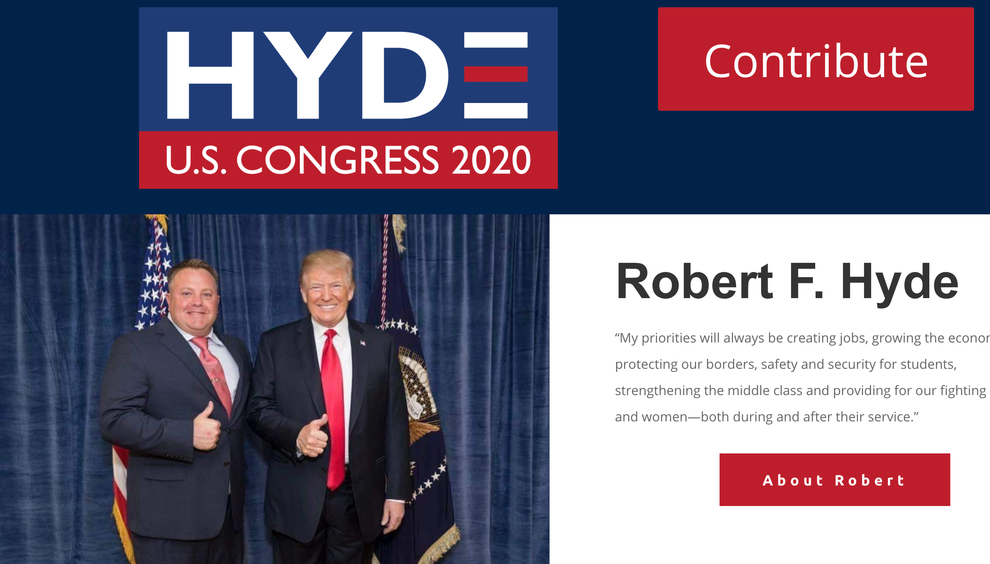 Robert Hyde posing with President Trump. Hyde has emerged as the latest figure in the impeachment saga following the release of messages in which he discusses surveillance of former U.S. Ambassador Marie Yovanovitch. hydeforcongress.com hide caption

A quiet New England community west of Hartford, Conn., has found itself roped into the impeachment saga with the emergence of an improbable character in the ongoing Ukraine scandal: Robert Hyde.

Hyde is a 40-year-old congressional candidate and former landscaper in Simsbury, Conn., who is known for being brash, foul-mouthed and for hitching his candidacy on his fervent support for President Trump.

He is also someone who has paved inroads with a cast of characters involved in the pressure campaign against Ukraine that has Trump facing an impeachment trial in the Senate on allegations that he abused his power and obstructed Congress.

Hyde rose from obscurity and grabbed the impeachment limelight following the release of a new tranche of documents by House Democrats this past week in which WhatsApp messages between him and an associate of Rudy Giuliani, the president's personal attorney, show Hyde appearing to brag about spying on the former ambassador to Ukraine, Marie Yovanovitch. The messages were sent in the weeks before the Trump administration recalled Yovanovitch from her posting in Kyiv.

Among the exchanges between Hyde and the Giuliani associate, Lev Parnas, is one message from Hyde that reads: "Her phone is off. Computer is off. She's next to the embassy. Not in the embassy. Private security. Been there since Thursday."

"They know she's a political puppet. They will let me know when she's on the move," Hyde says.

The documents released by House Democrats also revealed an unnamed Belgian phone number sharing information about Yovanovitch's whereabouts with Hyde, who then shared it with Parnas.

Now, the State Department and Ukraine's interior ministry have launched investigations into reports of the surveillance against Yovanovitch. The FBI has separately visited Hyde's home and business.

"We will do everything we need to do to evaluate whether there was something that took place there. I suspect that much of what's been reported will ultimately prove wrong," Secretary of State Mike Pompeo told Sinclair Broadcast Group on Friday.

Hyde had established several dozen Facebook pages that were publishing coordinated posts defending himself in the face of his links to Parnas, according to The Wall Street Journal. Facebook has removed the pages, explaining that the pages mislead people by concealing who controls them.

"WTF Facebook?! Please make this right and return our pages. I and other editors put a lot of time and money into these pages," Hyde said in a response on Twitter.

In the Simsbury area, locals have been watching with a mix of bafflement and shock as their central Connecticut community captures worldwide attention over Hyde's purported claims to be tracking a former U.S. ambassador.

Hyde declined an interview request, but did send a number of responses to questions through text messages.

"A few nasty people in the swamp want to discredit me and paint me as this bad person. I'm an honorable Marine that got involved in the swamp," Hyde said.

Since the release of the House documents he has also posted voluminously to his Twitter account about the allegation that he was surreptitiously tracking Yovanovitch's movements.

"Are you kidding? Like I have anybody over in the Ukraine — are you serious? I'm a landscaper from Simsbury, Connecticut that's trying to get into the government relations, public relations world — lobbying world, whatever you want to call it," Hyde said in a Twitter video.

In an interview with the Hartford Courant, which posted interview snippets on Twitter, Hyde said the spate of texts at the center of the controversy were fired off in jest.

"So when they're sending me these texts, and I'm like, 'whatever, dude yeah, under surveillance, just joking," Hyde said. "I'm not a gangster. I don't know these people. I don't have anything to do with them. I'm just a landscaper. I'm not in the business of hurting people — I never have been," he told the paper.

Hyde says he served in the Marines from 1999 to 2005, having done tours in Iraq. His LinkedIn profile says he operated a company called RF Landscaping and Construction for 16 years. The profile also describes him as a self-employed "change agent" since January 2014.

Records show Hyde piled up debt at the Trump National Doral Miami resort. He's posted selfies on social media with Trump and other Republican officials. Reports chronicling a history of financial and legal troubles came not long after his name surfaced in the Ukraine story. 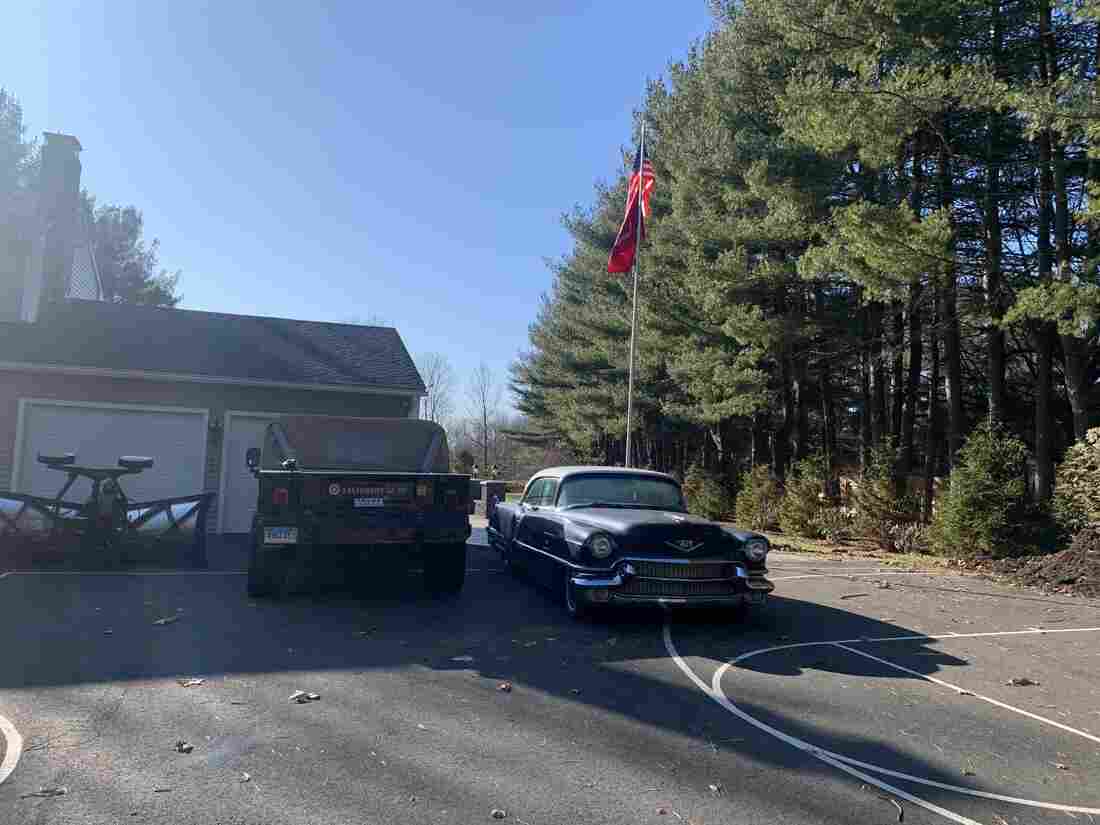 The Simsbury, Conn. home of Robert Hyde, who says he was joking when he messaged a Rudy Giuliani associate about tracking the movement of a U.S. ambassador in Ukraine. Bobby Allyn/NPR hide caption 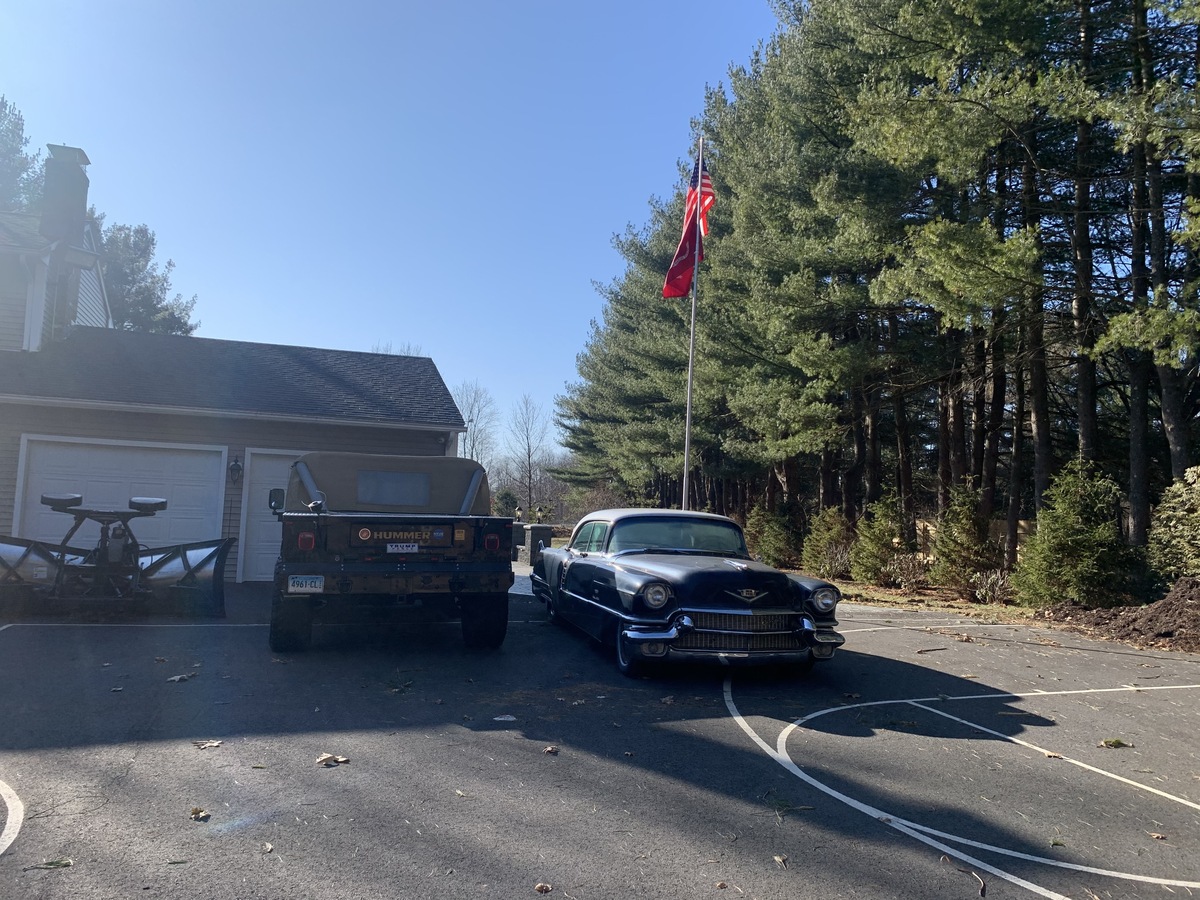 The Simsbury, Conn. home of Robert Hyde, who says he was joking when he messaged a Rudy Giuliani associate about tracking the movement of a U.S. ambassador in Ukraine.

The Republican Party in Connecticut has asked Hyde to drop his congressional bid, but Hyde says he "loves what Trump stands for" and is keeping his candidacy alive.

If his long-shot candidacy does gain momentum, his recent past could make him vulnerable.

In May, Hyde was removed from the Doral golf resort after telling police he was paranoid "someone was out to get him," including his belief that the Secret Service was hacking into his computer, according to a Doral Police Department report reviewed by NPR.

In Massachusetts, a prosecutor is moving to have Hyde jailed, asking a judge to revoke his bail in a protective order that was filed against him by a political consultant who claimed Hyde stalked and harassed her. Hyde did not respond to a request for comment about the claim.

According to the Simsbury Police Department, Hyde had turned over six weapons — including a flare launcher and more than 800 rounds of ammunition — to authorities in accordance with a separate protective order.

"I'm not at liberty to talk about some court cases. But when they're over you'll see the truth. I'm forty years old and have never been a criminal or insane. Never have done drugs and haven't drank more then a dozen beers since May 2019. The truth shall prevail," Hyde told NPR by text message.

Residents in the Simsbury area this weekend had many questions about Hyde.

Before this week, local construction worker Michael Garrard, who says he follows local politics, said: "I've never heard his name mentioned, honestly. And I've been in this town my entire life, 48 years."

Another local, Ellen Retelle, said of Hyde, "He's done a lot of, from my perspective, strange things in his capacity as a landscaper."

Hyde, she said, will not be getting her vote.

"He seems unstable and unreliable and similar to a lot of the characters who are involved in this Ukrainian scandal on the peripheral edges who are doing some really odd things," she said.

Across town, Brad Karsky, who runs an Italian restaurant, said Hyde used to be a regular.

"He was a bigger than life kind of guy. Pretty boisterous. Outgoing kind of gentleman," said Karsky. "He liked to be seen, and he'd sit at the bar, and he was very vocal. When he was in the restaurant, everybody knew it."

Because of profane language and aggressive behavior, Karsky said that on numerous occasions he had to ask Hyde to leave the bar.

"Not true," Hyde texted to NPR in response.