Accessibility links
Trump Defense Team's Ken Starr Was Ousted From Baylor University In 2016 Ken Starr was stripped of his presidency at Baylor University in 2016, accused of overseeing an administration that ignored a campus sexual assault scandal. 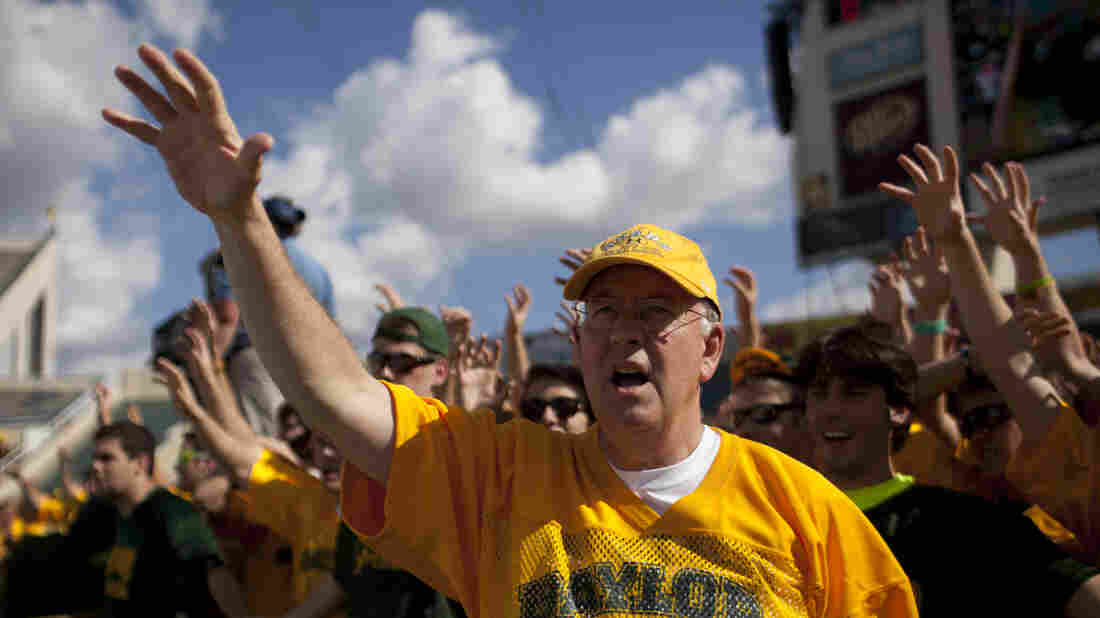 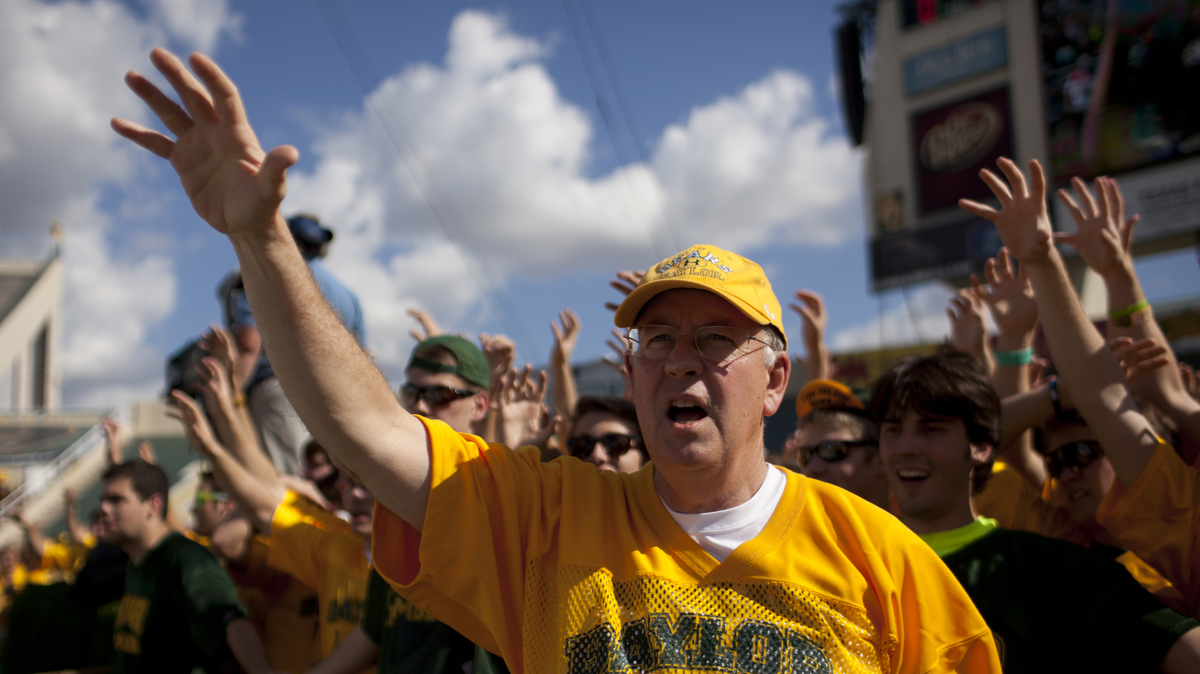 Ken Starr cheers with Baylor University students before a 2012 game against the University of Kansas Jayhawks in Waco, Texas.

On Friday, President Trump added former independent counsel Ken Starr to the legal team that will defend him in the Senate impeachment trial.

Starr is best known for leading an investigation into President Bill Clinton's affair with a White House intern during the 1990s.

The investigation was aggressive, lengthy, and offered a window into Starr's approach to holding the powerful to account. But in the years that followed the Clinton impeachment, a different type of scandal provided another picture of Starr's approach.

In 2016, almost two decades after Starr investigated the Clinton scandal, Starr was fired from his job as president of Baylor University, accused of ignoring sexual assault issues on campus.

"It seems very clear that he governed over a policy that was, at best, indifferent to what was happening to Baylor women," Jim Dunnam, a lawyer representing 15 women in an ongoing case against the university, told NPR.

When Starr took over the presidency at Baylor University in 2010, he appeared to have quickly grasped the importance of athletics at the Division I school. As president, he oversaw the opening of the university's $250 million football stadium. Before some games, he even ran onto the football field and cheered alongside students.

According to a 2016 report from The Wall Street Journal, the sexual assault scandal that plagued Baylor during Starr's tenure included at least 17 women who had reported sexual or domestic assault involving 19 football players since 2011. The reports included four instances of alleged gang rapes, according to the Journal.

Convictions soon followed. In 2014, former Baylor football player Tevin Elliott was convicted and sentenced to 20 years in prison on two counts of sexually assaulting a former Baylor student in 2012.

The results of the inquiry were damning. According to a summary of the findings of the law firm Pepper Hamilton released by the university in 2016, the investigators discovered a "fundamental failure" by Baylor to implement Title IX, the federal law that polices sexual violence on campus, as well as the Violence Against Women Reauthorization Act.

"Baylor failed to take appropriate action to respond to reports of sexual assault and dating violence reportedly committed by football players. The choices made by football staff and athletics leadership, in some instances, posed a risk to campus safety and the integrity of the University. In certain instances, including reports of a sexual assault by multiple football players, athletics and football personnel affirmatively chose not to report sexual violence and dating violence to an appropriate administrator outside of athletics."

The summary of the report didn't identify any of Baylor's top administrators by name, but stated that "senior leadership" had failed to support and engage with the school's Title IX functions, and that institutional failures "at every level of Baylor's administration" had impacted response to individual cases of alleged assault.

Starr declined NPR's request to comment on this story, writing in an email that, for now, he's "remaining silently on the media sidelines."

But in a 2018 interview with NPR, Starr said this about the Baylor scandal: "Unfortunately — and this is going to sound like an apologia, but it is the absolute truth — never was it brought to my attention that there were these issues. And I focused on student safety from day one."

Soon after the report was released, the school's athletics director resigned after being sanctioned and put on probation, and the head football coach was fired, along with other members of the athletics program. Starr was stripped of the presidency, and subsequently resigned from his faculty position.

The same year, a case was filed against Baylor alleging violations of Title IX and a "deliberately indifferent response" to student-on-student sexual assault. According to an early complaint filed in the case, reports of sexual assault to "high-level, policy-setting employees" at Baylor failed to result in change at the university.

"Starr was at the helm the entire period of time," said Dunnam, one of the plaintiff lawyers in the case, which remains ongoing.

When asked how much he thinks Starr knew of the school's sexual assault problem, Dunnam pointed to a lesser-known 2014 report by the consulting firm Margolis Healy & Associates that was also commissioned by the university and obtained by the Waco Tribune-Herald in 2018.

The report outlined how administrators, including athletic department staff, had received little to no training regarding Title IX, and had failed to adequately communicate with and support students. One person the firm interviewed said, "We have to stop being stupid." The Margolis Healy report was delivered to Baylor almost two years before Starr was ousted in 2016. Starr has claimed it as evidence of the university's commitment to addressing student safety.

Still, the specifics of how Starr handled the scandal remain unknown. The 2016 Pepper Hamilton report was never released in full.

But that could change. Last March, a federal judge in Texas ordered the law firm to turn over records connected to its 2016 inquiry into Baylor requested by the plaintiffs.

According to the firm's initial summary, it reviewed emails, cellphone data and documents from current and former Baylor employees, as well as interviews with more than 65 people, including witnesses in the president's office as part of its investigation. For now, says Dunnam, the case is still in discovery.

After Baylor, Starr joined the Lanier Law Firm in 2018, and became a frequent commentator and defender of the president on Fox News. Those appearances have helped return Starr to the center of yet another presidential impeachment.