Accessibility links
$11 Billion And Counting: Trump's Border Wall Would Be The World's Most Costly The costs keep piling up for Trump's border wall which has a current pricetag of $11 billion — nearly $20 million per mile. It's more expensive than any other wall under construction in the world. 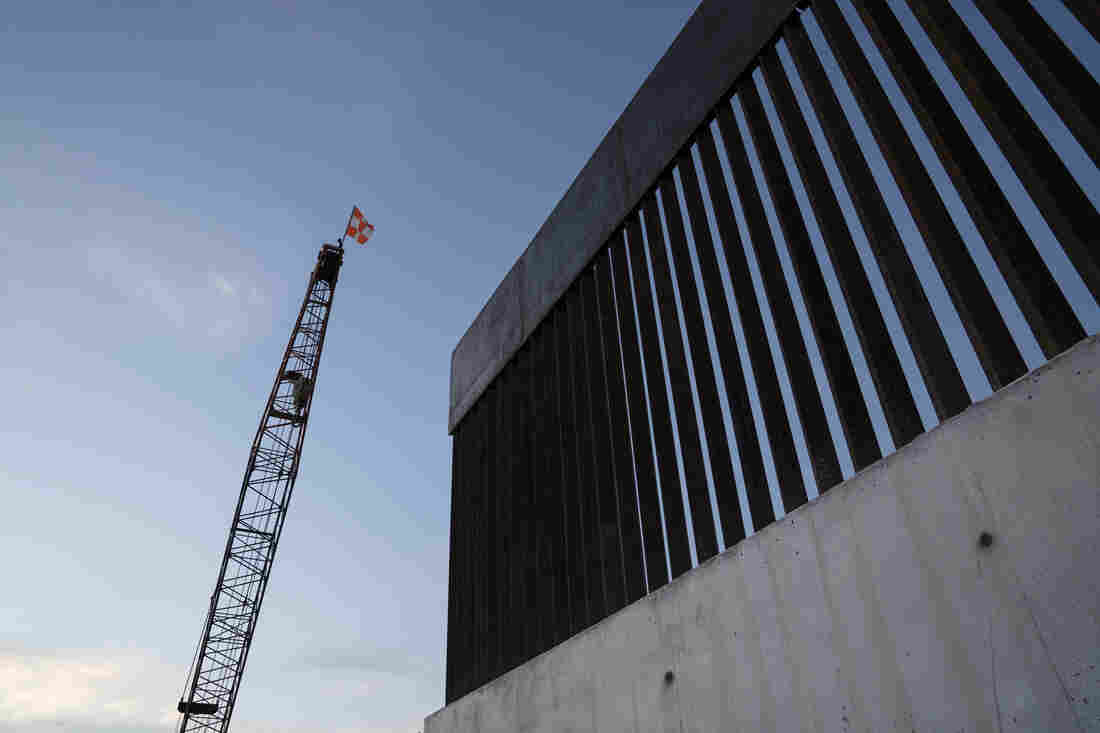 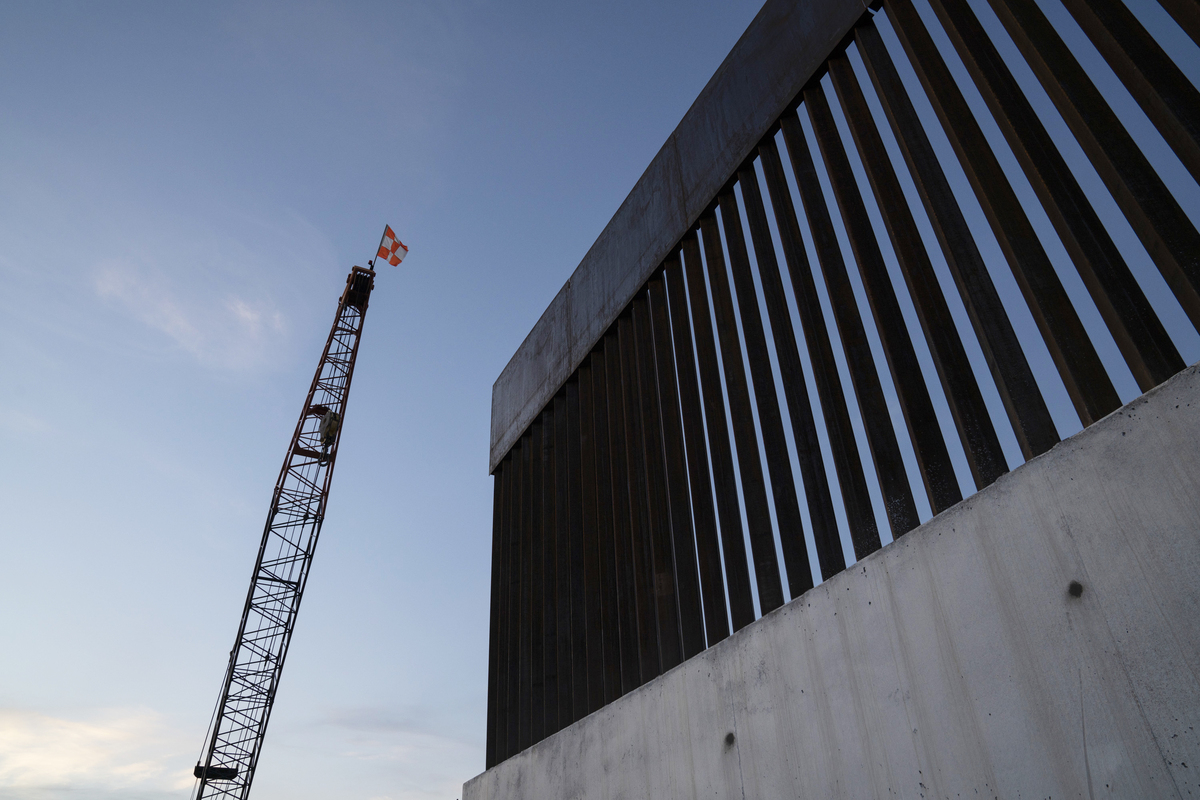 A new section of the border wall is seen in November 2019 south of Donna, Texas. Trump's 576-mile border wall is expected to cost nearly $20 million per mile, which is more expensive than any other wall under construction in the world.

The pricetag for President Trump's border wall has topped $11 billion — or nearly $20 million a mile — to become the most expensive wall of its kind anywhere in the world.

In a status report last week, U.S. Customs and Border Protection, which is overseeing wall construction, reported that $11 billion has been identified since Trump took office to construct 576 miles of a new "border wall system."

And the Trump administration is on the hunt for funding to build even more. The Department of Homeland Security has asked the Defense Department to come up with money for 270 additional miles of border wall that DHS says is needed to block drug smuggling routes on federal land. The Pentagon is studying the request, which did not come with a dollar figure.

If the Trump administration completes all of the wall projects it has set in motion, three-quarters of the U.S. southern border would be walled off from Mexico. The government inherited about 650 miles of border structures erected under Presidents George W. Bush and Barack Obama.

"You're going to have a wall like no other. It's going to be a powerful, terrific wall," President Trump said at a rally in Milwaukee last week. "A very big and very powerful border wall is going up at a record speed, and we are fully financed now, isn't that nice?"

To get an idea why the government is spending so much on Trump's border wall, look no further than the construction sites down in the Rio Grande Valley of Texas.

This Migrant Won In Immigration Court, And The U.S. Sent Him To Mexico Anyway

On one side of a caliche road, you can see the pedestrian fence that was erected more than a decade ago. At 18 feet, it looks downright puny. On the other side of the road are massive steel bollards topped with an "anti-climbing plate" that rise 30 feet above the cotton fields, surrounded by men in hardhats and heavy equipment.

Bush's fence averaged $4 million a mile; Trump's wall costs five times that—$20 million a mile. The overall cost of $11 billion is approaching the price of a nuclear-powered aircraft carrier.

"The border wall system will include a 150-foot enforcement zone, lighting, cameras, other technology, and most importantly an all-weather access road making it easier to respond to (undocumented immigrant) traffic," Alvarez said. "So it's not just gonna be the barrier itself."

There's more steel — an expensive commodity — in a 30-foot structure. Also, there are powerful floodlights, and every mile will have conduit for electric power and fiber optics that connect the surveillance cameras. Electronic gates that allow passage through the wall cost up to $1 million a piece. And there's a graded, graveled enforcement zone as wide as a six-lane highway. 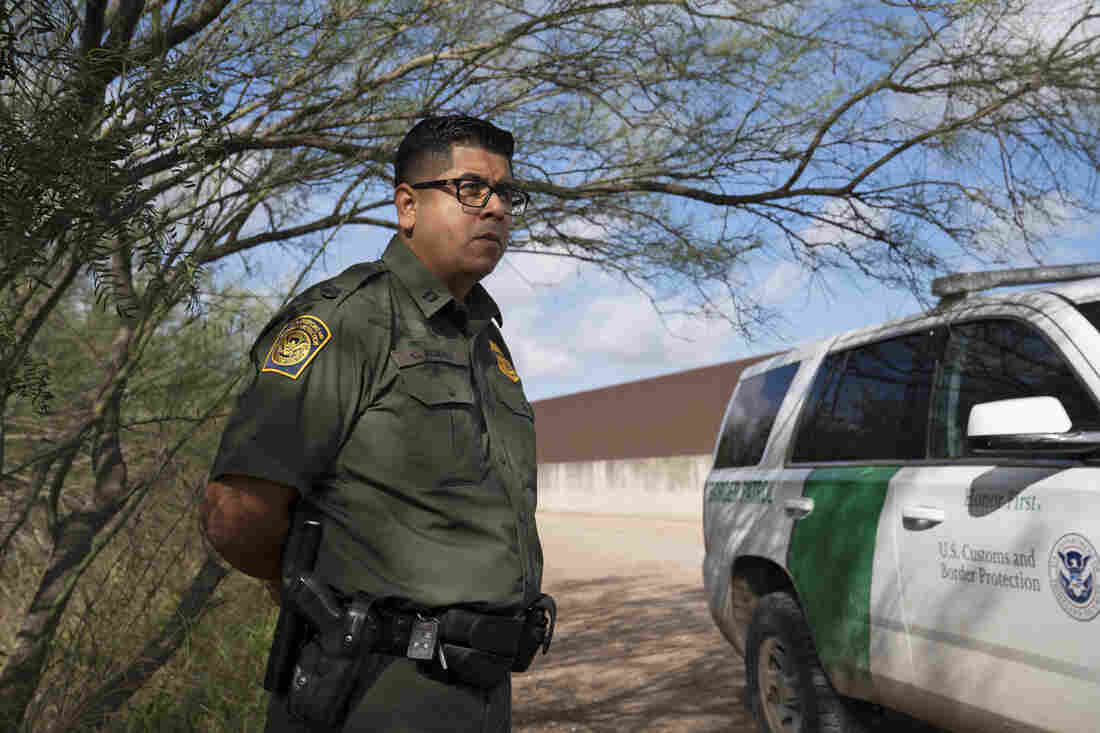 "The border wall system will include a 150-foot enforcement zone, lighting, cameras, other technology, and most importantly an all-weather access road making it easier to respond to traffic," Christian Alvarez, a Border Patrol spokesman, says. Verónica G. Cárdenas for NPR hide caption 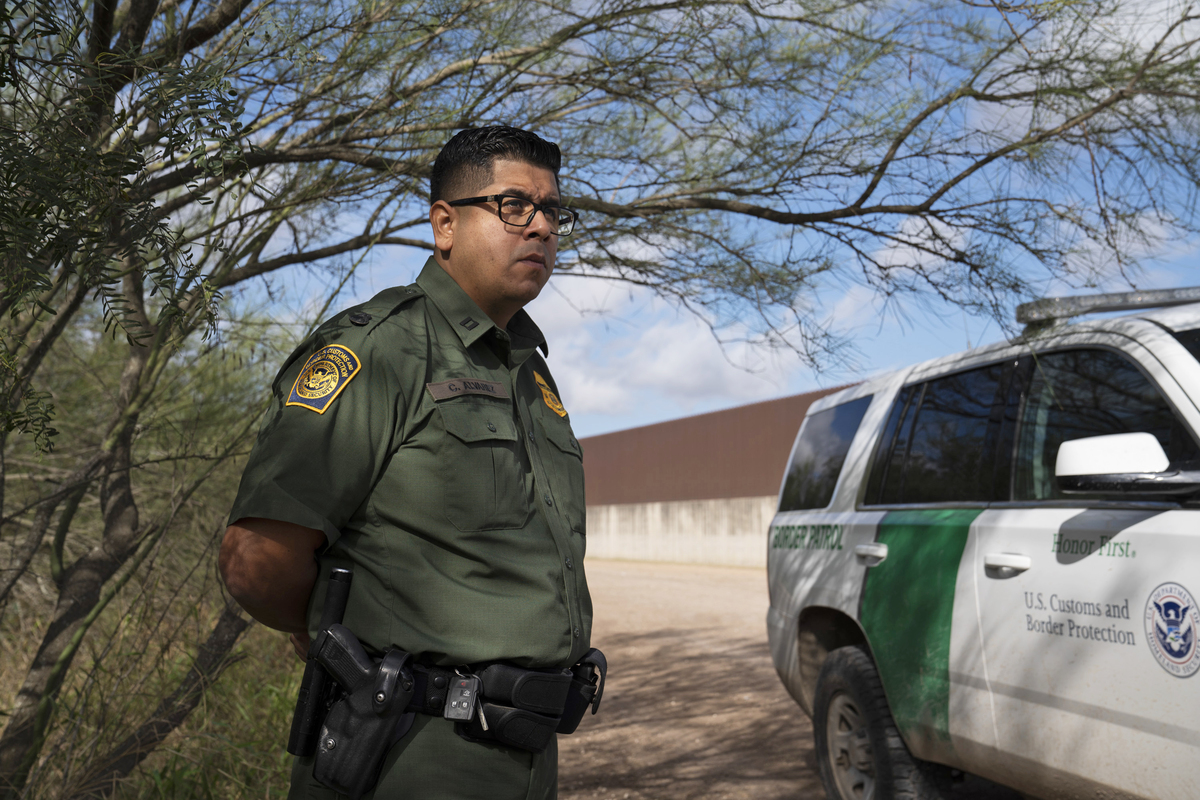 "The border wall system will include a 150-foot enforcement zone, lighting, cameras, other technology, and most importantly an all-weather access road making it easier to respond to traffic," Christian Alvarez, a Border Patrol spokesman, says.

Trump's border wall is now the tallest and most expensive in the world, said Reece Jones, a geographer at the University of Hawaii who studies border walls.

"The cost of almost $20 million per mile cost is four times as much as the most expensive other walls being built," Jones said.

Border walls are much in vogue in the post-Cold War era, he said, and there are now at least 60 around the world. Israel's wall on the West Bank ranks as the second most expensive — at a paltry $1 million to $5 million a mile.

Congress appropriated funds to build the wall in the Rio Grande Valley, but the government now says it needs more. CBP is dipping into $600 million of the Treasury Forfeiture Fund, which holds money seized in criminal investigations.

Some of the extra money will be used to build the wall higher and 10 miles longer. There have also been "increased project costs due to unforeseen site conditions" — to wit, serious seepage problems where the levee wall crosses a canal that empties into the Rio Grande.

These extra costs came to light in a recent deposition made by Loren Flossman, CBP's wall chief. He also said the agency needs more money to cover the ballooning expense of acquiring the strips of private property under the wall.

Taking private land through eminent domain involves multiple agencies, including the Department of Justice, and can lead to lawsuits. The process "significantly increases the hurdles that the government has to face," said Scott Nicol, a longtime wall opponent with the Sierra Club in the Rio Grande Valley.

"Where you have private property and the government has to go through the courts to get that property, it takes a lot longer and it drives the cost up because you have to pay for that land," Nicol said. "You have to send DOJ lawyers in to get that land."

By mid-January, the government had constructed 101 miles of border wall. A hundred miles of this is replacement or secondary wall; only one mile has been built where no barriers previously existed.

Contrary to President Trump's claims, the wall is not "going up at a record speed." In fact, construction has fallen months behind schedule because of the complexities of acquiring private land in the South Texas.

The massive wall projects that are currently underway are fully financed, primarily because of the president's willingness to sidestep a defiant Congress.

Over the last two budget cycles, a Democrat-controlled House authorized $2.75 billion for the wall — much less than Trump asked for. So Trump shut down the government, declared a state of emergency and diverted billions more from the Defense Department to pay for his wall.

Pro-immigrant groups promptly sued, and initially succeeded in getting federal injunctions to block military funding for the wall. But conservative majorities on both the U.S. Supreme Court and the federal appeals court in New Orleans stayed the injunctions and let the administration proceed with construction.

"I mean, with all due respect to the president, he's obsessed with this wall," said Rep. Henry Cuellar, a Democrat from Laredo, Texas, who sits on the House Appropriations Committee. "It's a campaign promise, and what happened to that Mexico was going to pay for this?"

Democrats say they do want border security, but the way to do it is with manpower and technology, not steel and concrete.

Then there's Fisher Sand & Gravel. The North Dakota company snagged a $400 million wall contract after CEO Tommy Fisher went on Fox News — a channel Trump frequently watches — to boast how he could build the wall faster and cheaper out on the California border.

"So that current fence they're building right now in Calexico, the government has been given basically 300 days to build two miles. With one crew, we can build 15 miles in one year," Fisher told a Fox interviewer.

Now, the Pentagon inspector general is reviewing the contract. Auditors want to know if the White House steered it to Fisher, who maintains his bid was the best.