Accessibility links
U.S. Navy To Name Aircraft Carrier After WWII Hero Doris Miller Miller was a mess attendant on the West Virginia when he jumped in to man a machine gun during the Pearl Harbor attack. He is the first African American to have an aircraft carrier named after him. 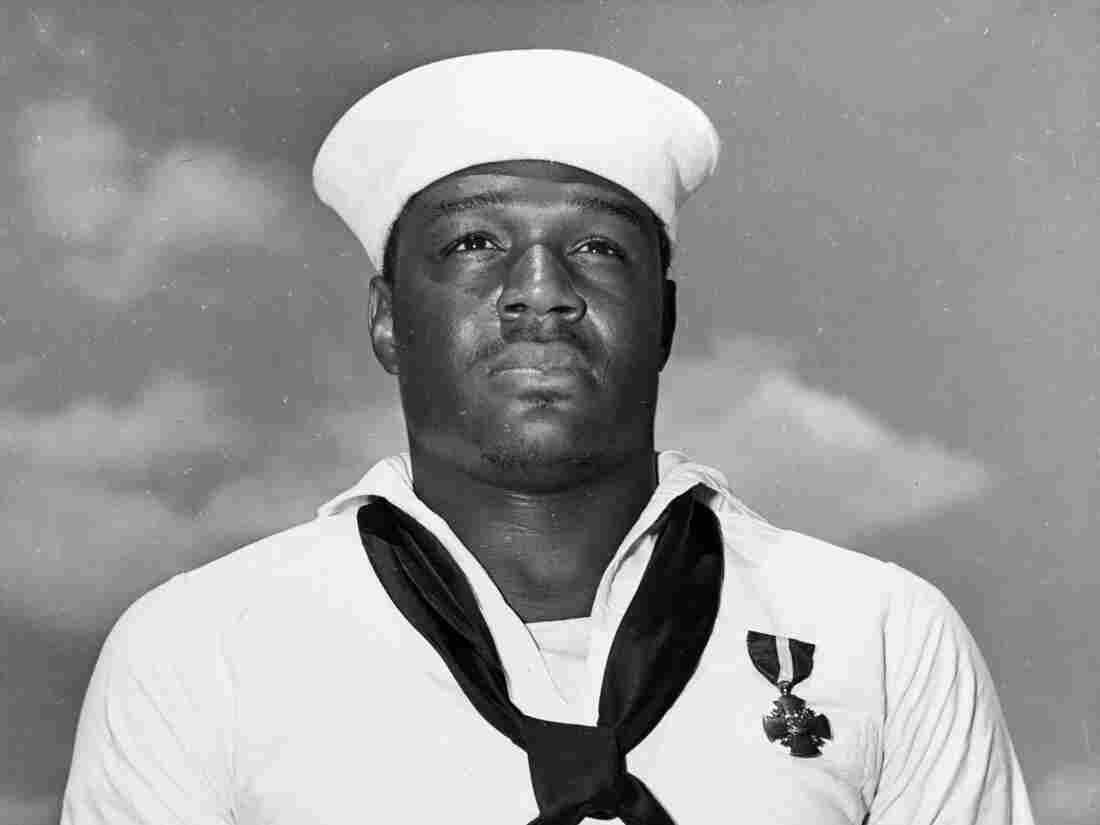 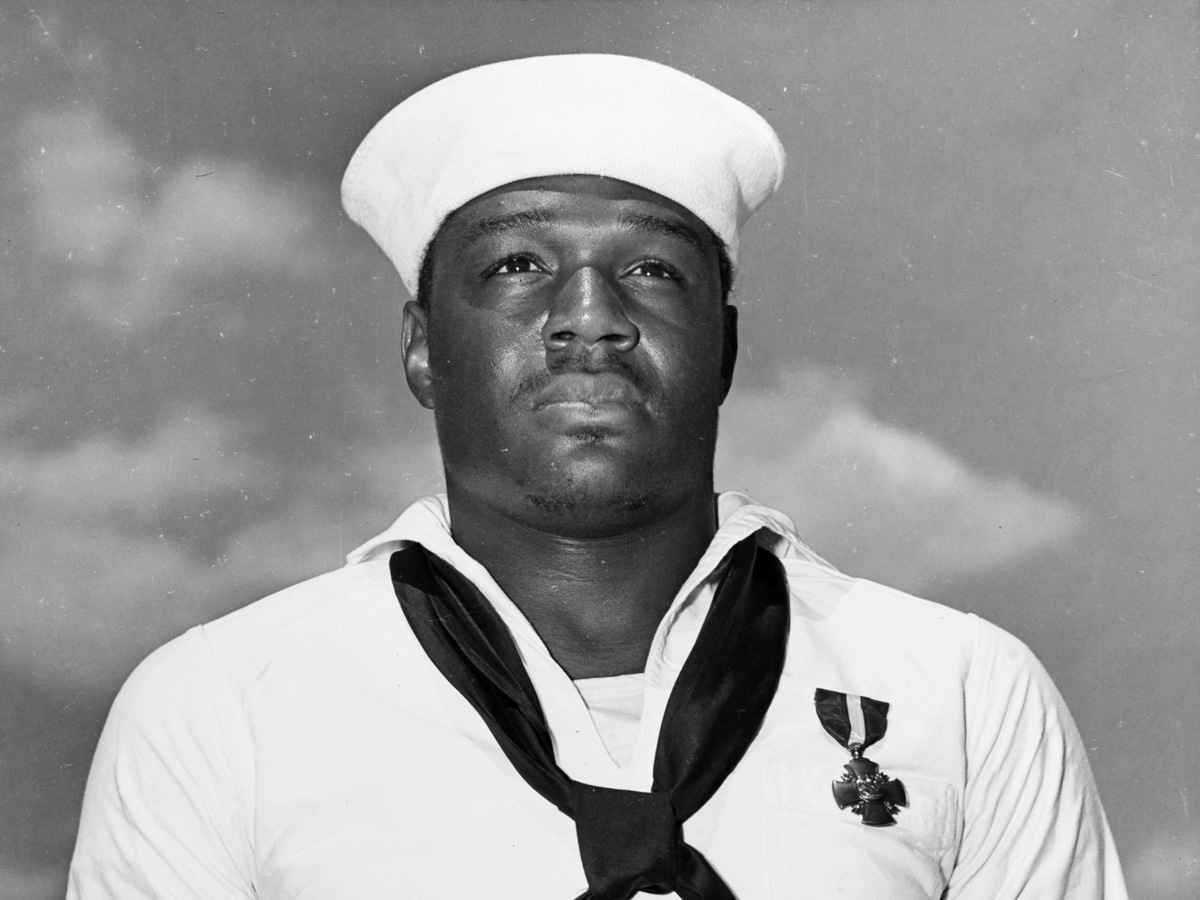 In this photo taken May 27, 1942, Mess Attendant 2nd Class Doris Miller stands at attention after being awarded the Navy Cross for for his actions aboard the USS West Virginia during the Japanese attack on Pearl Harbor on Dec. 7, 1941.

The U.S. Navy says it will name an aircraft carrier after Doris "Dorie" Miller, the African American mess attendant who heroically leapt into combat during the bombing of Pearl Harbor. It marks the first time that an aircraft carrier has been named for an African American, and the first time a sailor has been so honored for actions taken as an enlisted man.

In 1941, Miller was a 22-year-old mess attendant on the USS West Virginia. At the time, black sailors were consigned to roles in the messman branch — work that entailed swabbing decks, cooking and shining officers' shoes.

He had awoken at 6 a.m. and was collecting laundry when the Japanese attack began and an alarm sounded on the ship, according to the Navy. Miller headed to the antiaircraft battery magazine, but it had already been destroyed by torpedo damage. He proceeded to the deck, where he was assigned to carry his wounded comrades, including the ship's captain. Miller was strong: a former high school football player in Waco, Texas, he was the ship's heavyweight boxing champion.

The young sailor then took over a .50-caliber anti-aircraft machine gun and fired it until the ammunition ran out. No matter that he'd never been trained on the weapon.

"It wasn't hard," he remembered, according to a Navy history. "I just pulled the trigger and she worked fine. I had watched the others with these guns. I guess I fired her for about 15 minutes. I think I got one of those [Japanese] planes. They were diving pretty close to us."

The ship's communications officer, Lt. Cmdr. Doir C. Johnson, said that Miller was "blazing away as though he had fired one all his life," according to the Navy Times.

The West Virginia was heavily damaged in the attack. Japanese planes had dropped armored bombs and launched multiple torpedoes on the vessel. The ship slowly sank, and more than 100 of the men aboard the ship died that day. 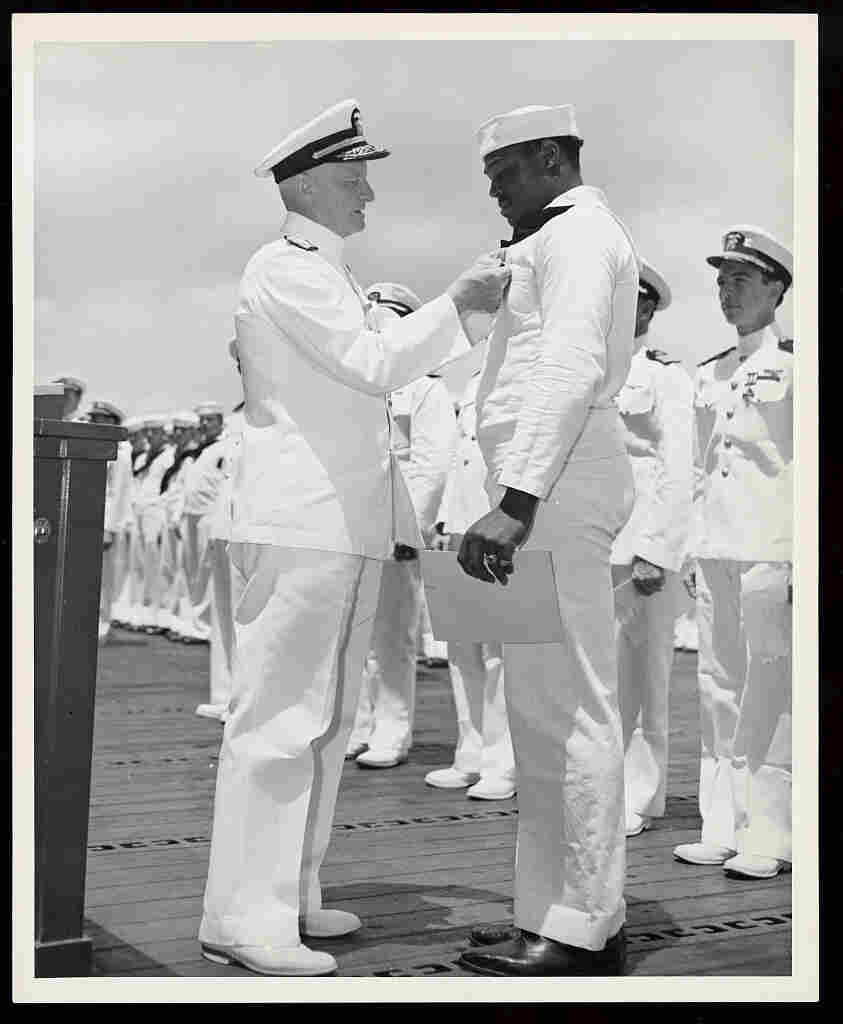 Admiral Chester W. Nimitz, Commander-in-Chief of the U.S. Pacific Fleet, pins the Navy Cross on Miller at a ceremony on board a U.S. Navy warship in Pearl Harbor on May 27, 1942. Library of Congress hide caption

For his bravery, Miller was presented with the Navy Cross in May 1942. He was the first black sailor to be awarded the medal, one of the Navy's highest honors.

"This marks the first time in this conflict that such high tribute has been made in the Pacific Fleet to a member of his race and I'm sure that the future will see others similarly honored for brave acts," Adm. Chester Nimitz, the commander of the U.S. Pacific Fleet, said at the time.

Miller had won renown, and he was brought home in November 1942 for a two-month tour to promote war bonds. His image was used on a Navy recruiting poster.

He did not survive the war. Miller was aboard the USS Liscome Bay when it was struck by a Japanese torpedo in the Pacific in 1943. Nearly 650 of the more than 900 sailors on board died when the ship sank, and Miller's body was never recovered.

He was posthumously awarded a Purple Heart, among other honors.

Shortly after Miller's death, the Navy began a small officer-training program for black sailors. In March 1944, the Navy commissioned its first black officers, known as the Golden Thirteen. 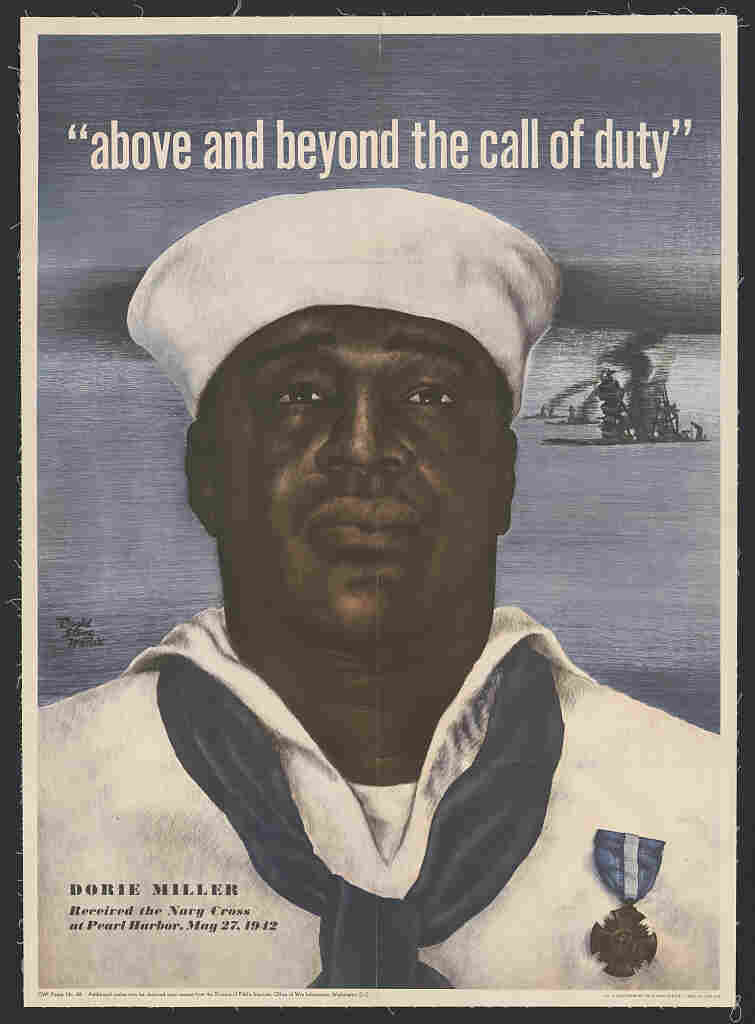 By naming the aircraft carrier for Miller, says Acting Secretary of the Navy Thomas B. Modly, "we honor the contributions of all our enlisted ranks, past and present, men and women, of every race, religion and background. Dr. Martin Luther King, Jr. observed, 'Everybody can be great — because anybody can serve'. No one understands the importance and true meaning of service than those who have volunteered to put the needs of others above themselves."

"Doris Miller stood for everything that is good about our nation," said Modly, "and his story deserves to be remembered and repeated wherever our people continue the watch today."