Accessibility links
Super Bowl LIV Matchup: Kansas City Chiefs Vs. SF 49ers The Chiefs beat the Tennessee Titans 35-24 in the AFC Championship on Sunday. The 49ers followed with an NFC victory over the Green Bay Packers, 37-20. The Chiefs and 49ers will meet in Miami Feb. 2. 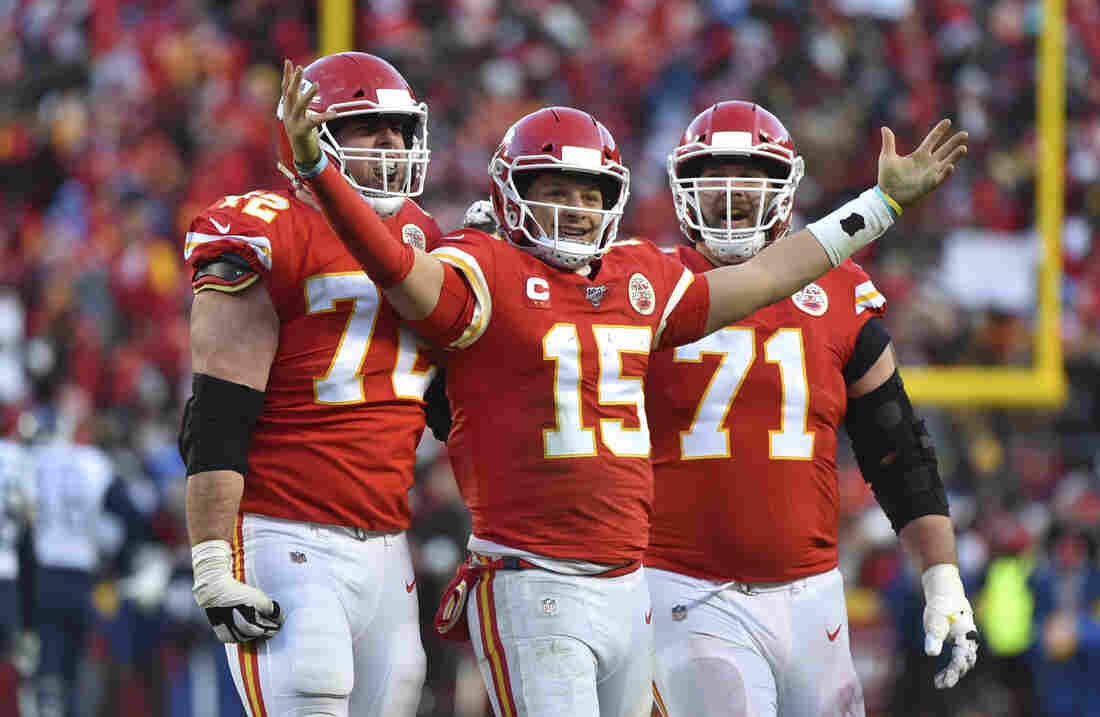 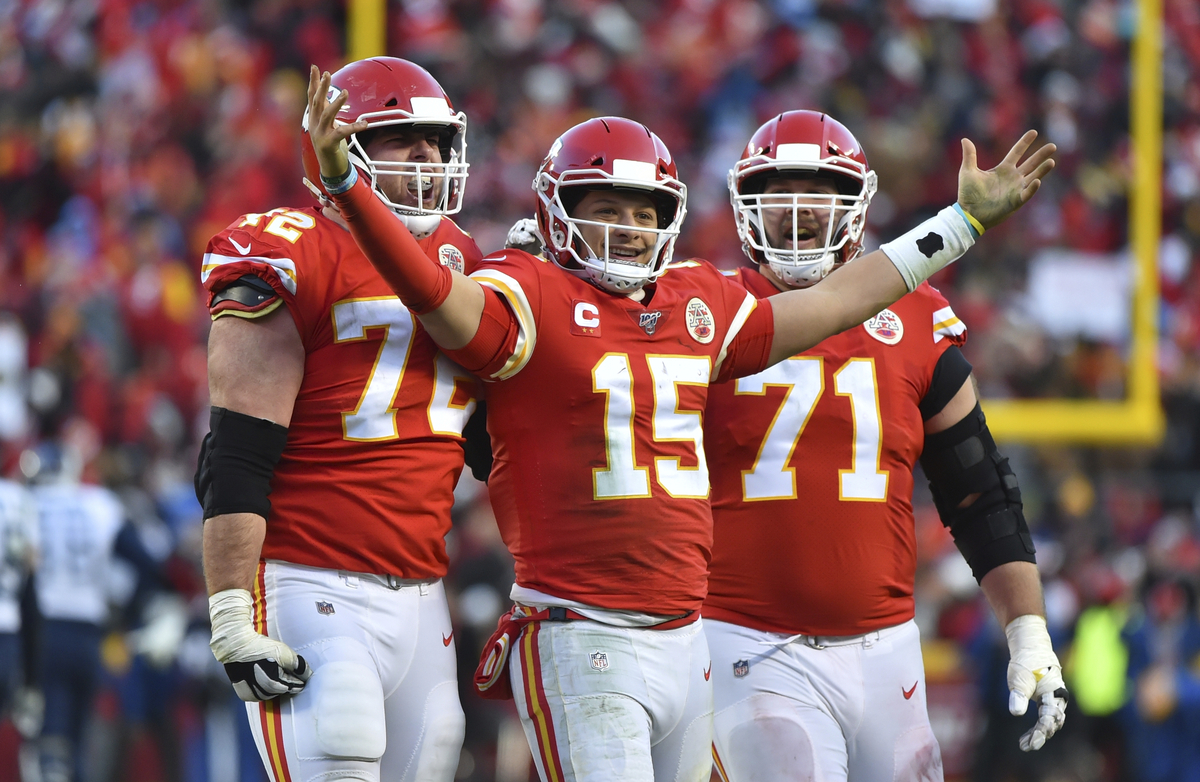 Kansas City Chiefs' Patrick Mahomes (15) celebrates a touchdown pass with teammates Eric Fisher (72) and Mitchell Schwartz (71) during the second half of the NFL AFC Championship football game against the Tennessee Titans on Sunday, in Kansas City, Mo.

The Kansas City Chiefs will face off against the San Francisco 49ers in Super Bowl LIV in Miami next month, after dominating the Tennessee Titans and the Green Bay Packers, respectively, in their conference championship games on Sunday.

The Kansas City Chiefs knocked out the Tennessee Titans 35-24 in the AFC Championship game on Sunday to secure their first trip to the Super Bowl in 50 years.

The Titans jumped to an early 17-7 lead in the first half, but Kansas City clawed their way back propelled by the play of star quarterback, Patrick Mahomes, who threw for 294 yards and three touchdowns. Mahomes, who was born a quarter century after the Chiefs' last trip to the Super Bowl, sealed the game with a fourth quarter, 60-yard pass to wide receiver Sammy Watkins.

"We're not done yet," Mahomes said after the game. "We're going to get it."

The victory was made extra sweet for Chiefs owner Clark Hunt, who after the game got to hoist the Lamar Hunt Trophy — named after his father and the team's founder — which was presented to him for the AFC title.

"This trophy belongs to the best fans in the National Football League," Hunt said to the hometown crowd at Arrowhead Stadium.

It's the Chiefs' third attempt chasing Super Bowl title, having done so successfully once in 1970. The Chiefs lost to the Packers, 35-10, in the first-ever Super Bowl in 1967. Three years later, Kansas City took their first Super Bowl victory in a matchup with the Minnesota Vikings.

In the rivalry NFC Championship game that followed, the San Francisco 49ers beat the Green Bay Packers 37-20. 49ers running back Raheem Mostert sent San Francisco on the road to Miami with three touchdowns in the first half alone.

The Green Bay Packers came charging back with a late surge. Quarterback Aaron Rodgers finally put Packers on the board in the third quarter, when he got the first of two touchdown passes he needed to carry his total playoff touchdowns to 40, surpassing Brett Favre's franchise record of 39.

In another touching father-son moment, former Super Bowl-winning coach Mike Shanahan, urged by 49ers owner Jed York, got to hand the George Halas Trophy to his son and the team's coach, Kyle Shanahan.

"We can win so many different ways," said Niners quarterback Jimmy Garoppolo, after playing a relatively idle game. "Raheem [Mostert], those guys up front, the tight ends obviously were just dominating tonight. It was fun."

"I just woke up like it was any other game," Mostert said. "Once we all get in a groove, we're just going to keep it riding, keep it going, and that's what we did."

The Niners emerge Super Bowl-bound for the first time since Colin Kaepernick paved the way seven years ago. In the franchise's six previous Super Bowl appearances, the 49ers have only blown the title once.

The big game is set to take place at Hard Rock Stadium, the home of the Miami Dolphins on Feb. 2. FOX will air the game, which kicks off at 6:30 p.m. ET. Demi Lovato is signed on to sing the national anthem at the pregame show; Jennifer Lopez and Shakira will take the halftime stage.