Accessibility links
Scott Simon Draws The Mystery Of 'Sunnyside Plaza' From His Own Past When NPR host Scott Simon was in his teens, he took a job in an assisted living facility in Chicago. "It really opened my eyes into seeing the world differently," he says. 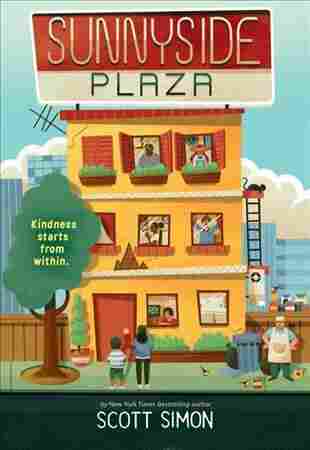 When NPR host Scott Simon was in his late teens, he took a job in an assisted living facility in Chicago, working with people who had developmental disabilities.

"It was more formative in my life, I think, than most any war I've covered, any political campaign I've covered, any reportorial experience I've had," Simon says. "It really opened my eyes into seeing the world differently."

Simon has wanted to tell this story for years, and so he drew on the experiences he had back then to write a new mystery for young readers called Sunnyside Plaza.

Simon says he purposefully did not use specific terms to describe the people who live at Sunnyside Plaza. "I want readers to see them as people, not put a label on them at any point in the book ... " Simon explains. "I don't want to get tied up in a language issue."

This is Simon's ninth book and is the first that he has written for younger readers. "I have children," he says. "I wanted to finally write a book that they would have a chance of reading past their names in the acknowledgments."

On his 19-year-old narrator, Sally Miyake

She is absolutely a reflection of some people I actually knew [in Chicago] ... who were in their late teens. I wanted somebody who was in that community, who was known by everybody, yet was a fairly recent arrival, hadn't been there for many years — somebody, in a sense, who was still trying to carve out and define her identity in this community of people.

On the mystery in the book

On the unkind or ignorant things people say

I used to think that the people in the home didn't understand it or didn't hear it. What I came to know as I knew them is: Of course they heard it. And of course they kind of knew it's something that people shouldn't say. But what are they going to do? They look past it. They had a largeness of heart and a largeness of spirit that, you know, I admire it to this day. ...

[In the book,] not everybody they run into misunderstands them. A lot of the people ... they may not understand them, but they are kind and courteous and their hearts are open. And I think one of the things I learned is that for a lot of the people in this circumstance, they approach people very genuinely. They approach people very directly. ... I think the best people — and that includes a lot of people — understand that somebody is reaching out to them directly and they appreciate it, and they could recognize the quality of their character.

On the passage of time

On a conversation he remembers having with a man named Tony, as he was helping him get ready for bed

Lisa Weiner and Reena Advani produced and edited this interview for broadcast. Beth Novey adapted it for the Web.