Accessibility links
Looming Trump Impeachment Trial Adds Urgency To Senators' Campaign Push The four senators running for president will mostly be off the campaign trail in the final days before Iowa votes. They'll work around the impeachment trial with Skype, surrogates and red-eye flights. 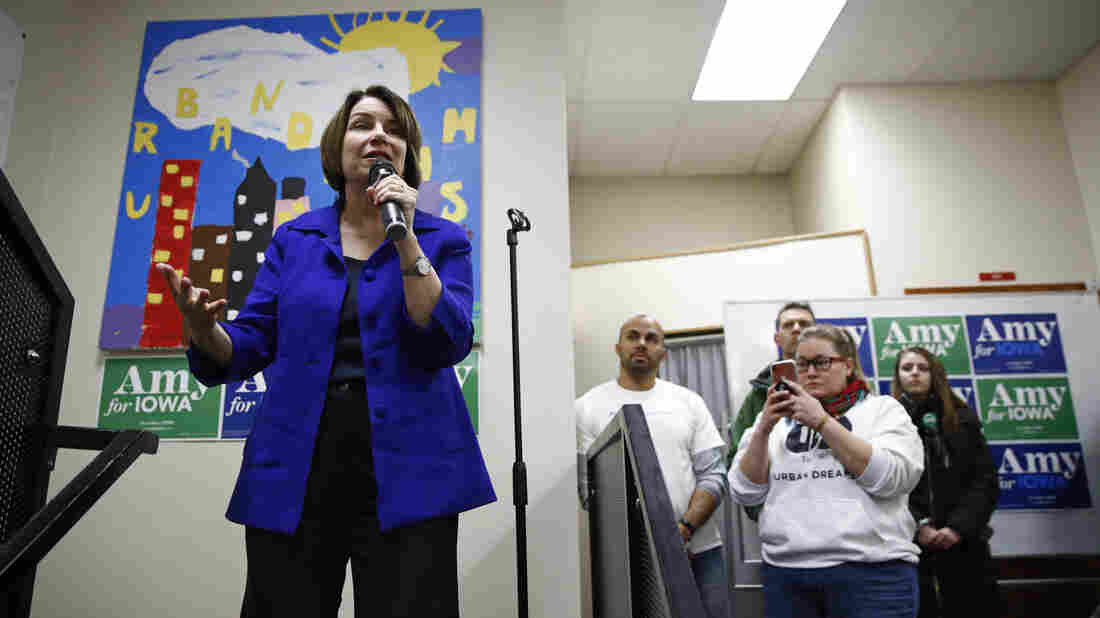 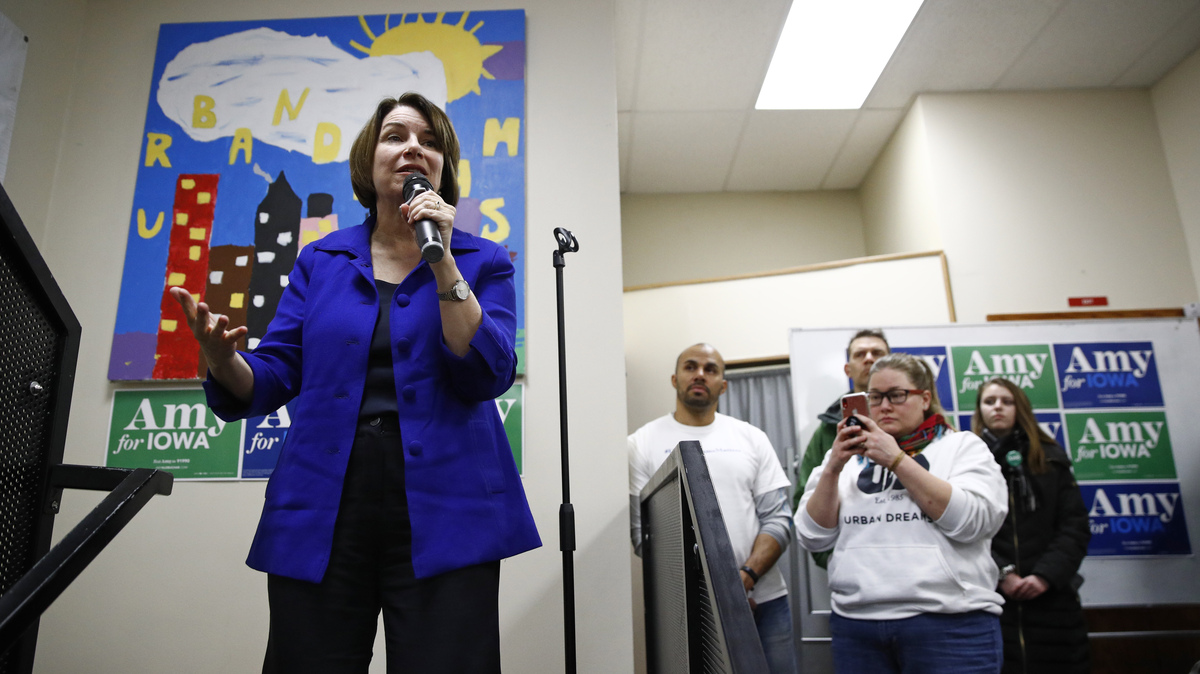 Democratic presidential candidate and Minnesota Sen. Amy Klobuchar speaks during a campaign event Sunday in Des Moines, Iowa. President Trump's impeachment trial will pull her and three other candidates off the trail at a critical juncture.

How confident are Iowa Democrats in their choices, now two weeks out from the caucuses?

The response Renee Kleinpeter gave NPR when asked which candidates she has narrowed her choice down to could sum it up: four seconds of laughter.

"I'll go with anybody who could beat [President] Trump," she said after laughing. "I wish somebody could tell me."

Lacking any reliable electoral crystal balls, Iowans are instead keeping their options open. The most recent Iowa Poll, out earlier this month, showed that more than half of likely Democratic caucusgoers were either undecided, or could still change their top choice before Feb. 3.

Now, in the midst of all that fluidity, the four U.S. senators still in the race will be disappearing from the campaign trail. Starting Tuesday, Sens. Bernie Sanders, Elizabeth Warren, Amy Klobuchar and Michael Bennet will sit on the Senate floor six days a week as impeachment jurors.

The looming trial — and the uncertainty it adds to the final days before the first primary contests in Iowa and New Hampshire — added some urgency to this weekend's campaigning. Snowstorms in both states did too.

"Thank you for understanding that I'm not going to be able to be here every day, and so you show up on this snowy day," Klobuchar told a crowd in Coralville, Iowa.

Like the three other senator-candidates, Klobuchar insists she's not particularly worried about missing campaign events and is stressing her constitutional obligations as a juror.

And, she quipped to the crowd, "I'm a mom and I can balance things really well."

Her campaign is also planning remote events over Skype, along with deploying family members and surrogates to meet with potential supporters. And seeing the trial looming, Klobuchar sped up her schedule for visiting every one of Iowa's 99 counties.

"I'm just cramming everything I can do into every waking hour," she said.

Still, some supporters aren't quite as sanguine about how the trial could affect Klobuchar's chances. (She's currently polling in fifth in Iowa.) "To not be able to get out there and meet more people ... I can't see how that wouldn't hurt somewhat," said Tim Behlke, moments after signing a commit-to-caucus card. 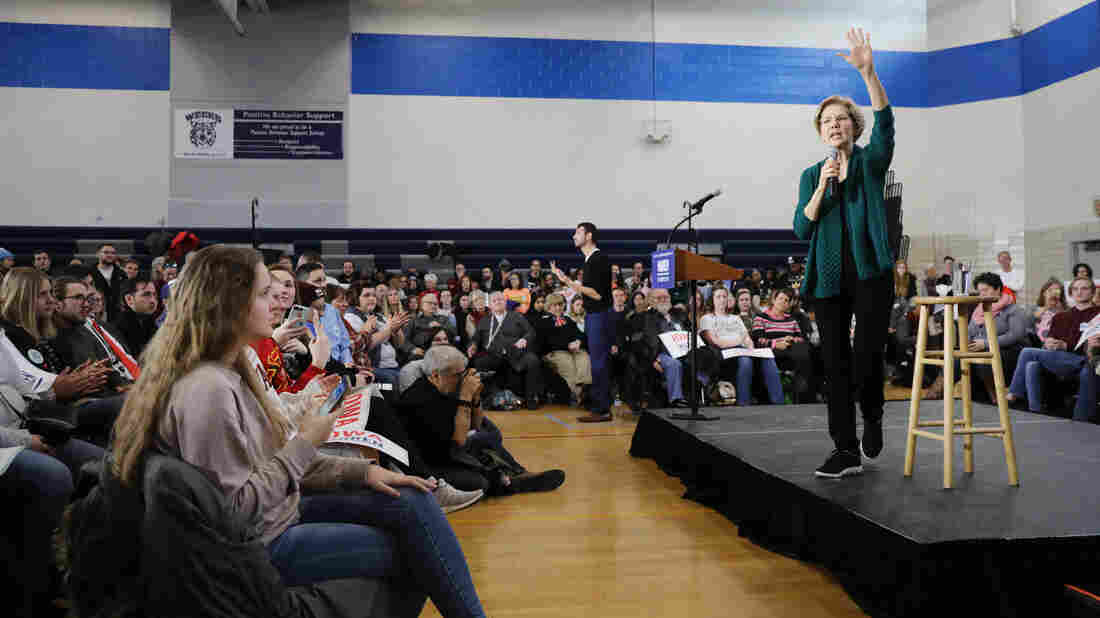 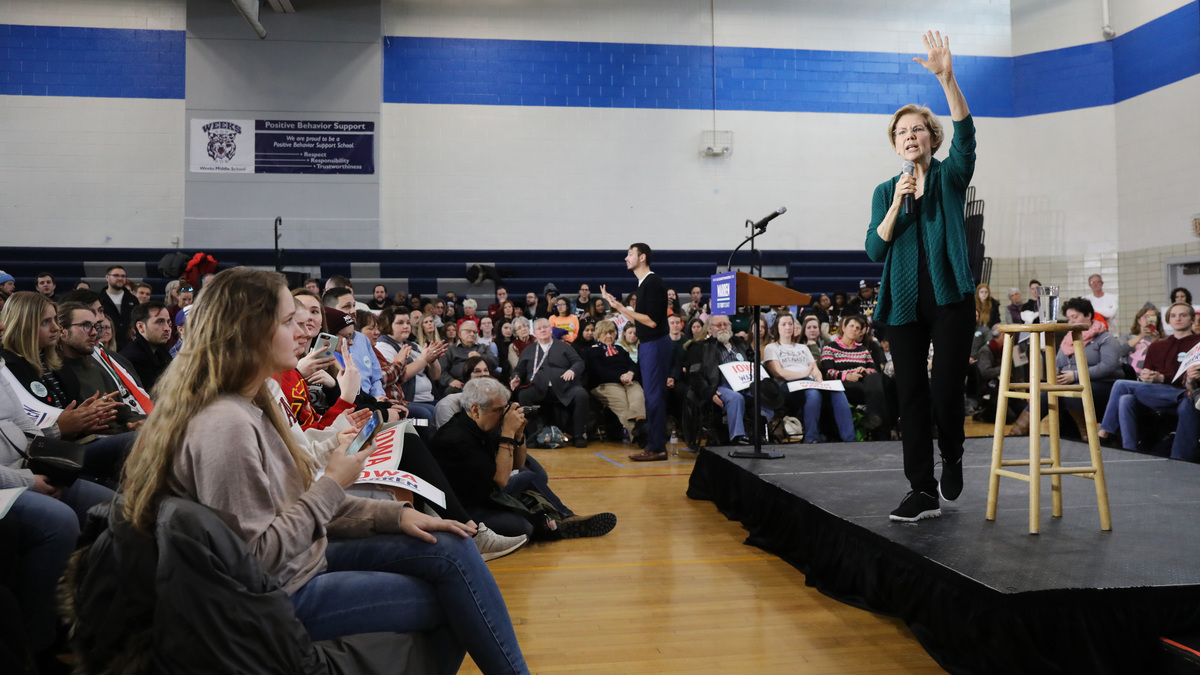 Of course, impeachment won't completely end campaigning for the senators in the race. Sanders has already announced a rally this Wednesday night in Iowa. He'll fly there after the trial has wrapped for the day and be back in Washington, D.C., the next morning.

And the proceedings won't have any effect on the other hallmarks of campaigns in the closing days of a race: volunteers and organizers knocking on doors and calling and texting potential caucusgoers; and ads on television, radio and online.

Still, the weekend of campaigning carried a whiff of premature nostalgia for some of the candidates who have spent most of the past year in Iowa.

"I'll miss all the questions I get from people, the unfiltered questions, folks who get to stand up and say, 'This is what matters to me. Talk to me about it,' " Warren told reporters after a Sunday rally in Des Moines.

"I truly have loved this part of the campaign, and I hope I'll be able to come more to Iowa," she said, "because the good people of Iowa have really taught me core parts of democracy."