Accessibility links
'The Third Rainbow Girl' Is Both Coming-Of-Age Story And True Crime Mystery Emma Copley Eisenberg's book offers a deep-dive into rural Appalachia — and digs into questions of how misogyny and bias can take root inside a community — as she tracks a double murder. 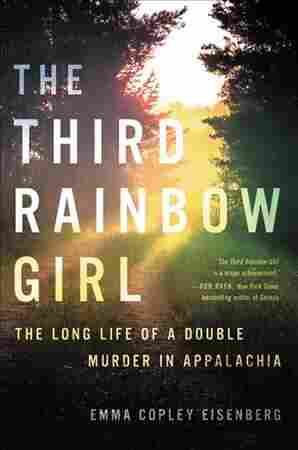 The Long Life of a Double Murder in Appalachia

Emma Copley Eisenberg's The Third Rainbow Girl is a true crime tale as thoroughly researched and reported as it is perplexing.

The book offers a deep-dive into rural Appalachia, a region of the United States that is little understood, and it digs into questions of how deeply misogyny and bias can run inside a community. It is also an honest and endearing coming-of-age tale — one that will leave readers curious to know what Eisenberg will write about next. However, like any good true crime story, The Third Rainbow Girl starts with the facts.

In the summer of 1980, two women hitchhiking from Arizona to a festival in rural West Virginia were shot. Their bodies were found in a clearing in Pocahontas County, a region of Appalachia where locals made their living by working the land — farming and hauling timber. The nearest town had fewer than 300 residents. Because of the isolated location of the murders, law enforcement determined that the killer must have known the area well. And so, an atmosphere of traumatized suspicion settled over the community.

The case took 13 years to go to trial, during which time nine local people were arrested. People who had known one another their whole lives accused one another, and even a known serial killer confessed (but was doubted). Long-standing tensions that had to do with poverty, lack of schools in the area and an unusually deep-seated culture of masculinity became painfully exacerbated.

Eisenberg, who grew up in New York, learned about the Rainbow Murders in 2010 while volunteering as a teacher at a summer camp for low-income girls in Appalachia. Her city friends could not understand her intense attraction to Pocahontas County — the wild land, the close friendships, the long nights of playing bluegrass music on the porch. And so, Eisenberg's research into the murders became entwined with introspection. The question of the two killed girls became linked with questions about Eisenberg's own sexuality and to her own experiences of trust with male friends.

Eisenberg's growing personal commitment to the summer camp for teen girls, and to her friends in this complicated rural ecosystem, emerges as the living heartbeat of the book. In parallel with her investigations into old case files (which sometimes comes across as too dry or too bogged down with information that is not obviously compelling), Eisenberg finds that, all too often, her students at camp are disappearing. Girls stop attending class, only to be spotted months later at tailgate parties or drinking in cars with their boyfriends.

At one point, Eisenberg runs into a former student at a rowdy social gathering, a red-haired girl who had once been frustrated by math lessons. The teacher and student just look at each other, silently acknowledging something that they both know — that life as a female is complicated.

Eisenberg tracks down the families of the two girls who were killed in 1980. Their grief is still palpable. The girls, Vicki Durian and Nancy Santomero, had been on their way to a Rainbow Gathering, a yearly meetup in nature attended by thousands of travelers. The gathering had a reputation for being a bit dirty and a nuisance but was for the most part just a harmless campout in the forest. There were no major disagreements between the Rainbow organizers and the residents of West Virginia, aside from a handful of stereotypes about "hippies versus hicks." The girls were last seen alive buying snacks at a local gas station.

To Eisenberg, the Rainbow Girls' cross-country trip was an idealistic but not extraordinary thing, especially in the 1980s. Eisenberg lets herself get angry about the negative stigma against women who travel alone — and understandably so. She is, herself, a woman who traveled to Appalachia alone. In that sense, the doggedness with which she hunts down the contradictory versions of the story, and the opinions of every person in town who ever had anything to do with the Rainbow case, makes sense. In fact, her relentless reporting and attention to detail are what make the true crime elements of this book so enjoyable.

Eisenberg unearths a web of people who were all deeply wounded by the Rainbow Murders — as well as by the community's failure to solve them. She begins to see, firsthand, the effects that gossip, and years of speculating, can have on the collective beliefs of a small town. She sees how doubt can lodge itself in the psyche of a place, cause harm, and remain.

The Third Rainbow Girl accomplishes what any good murder mystery should. It shines a spotlight on a nexus of people and a place. Eisenberg's tendency to weave in references to writers who've preceded her in the genre — Joan Didion and Truman Capote, for example — makes the reading experience uniquely thoughtful and introspective.

The insights into human nature are the real gritty, good stuff you get from reading a masterful work of journalism like this one.

Rachel Veroff is a writer and educator in New York. She has written for Guernica, Los Angeles Review of Books, Huffington Post, Literary Hub and Catapult.