Accessibility links
Review: 'Agency,' By William Gibson Gibson's new novel is a sequel to 2014's The Peripheral, jumping back and forth in time as investigators, military contractors and killers chase down a rogue AI, and tensions flare in the Middle East.

In 'Agency,' William Gibson Builds A Bomb That Doesn't Boom (And That's OK)

In 'Agency,' William Gibson Builds A Bomb That Doesn't Boom (And That's OK) 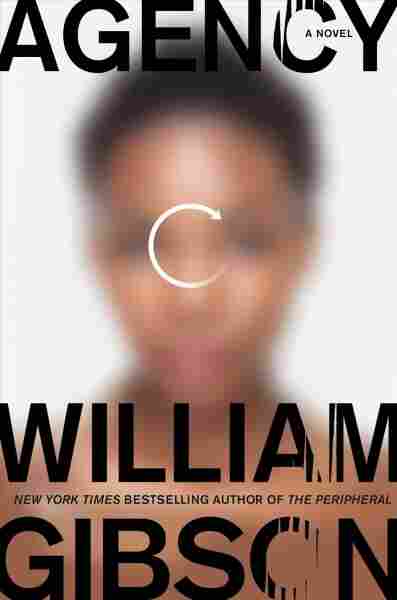 William Gibson does not write novels, he makes bombs.

Careful, meticulous, clockwork explosives on long timers. Their first lines are their cores — dangerous, unstable reactant mass so packed with story specific detail that every word seems carved out of TNT. The lines that follow are loops of brittle wire wrapped around them.

Once, he made bombs that exploded. Upended genre and convention, exploded expectations. The early ones were messy and violent and lit such gorgeous fires. Now, though, he does something different. Somewhere a couple decades ago, he hit on a plot architecture that worked for him — this weird kind of thing that is all build-up and no boom — and he has stuck to it ever since. Now, William Gibson makes bombs that don't explode. Bombs that are art objects. Not inert. Still goddamn dangerous. But contained.

You can hear them tick. You don't even have to listen that close. His language (half Appalachian economy, half leather-jacket poet of neon and decay) is all about friction and the gray spaces where disparate ideas intersect. His game is living in those spaces, checking out the view, telling us about it.

Agency, that's his newest. It's a prequel/sequel (requel?) to his last book, The Peripheral, which dealt, concurrently, with a medium-future London after a slow-motion apocalypse called "The Jackpot," and a near-future now where a bunch of American war veterans, grifters, video game playtesters and a friendly robot were trying to stop an even worse future from occurring. It was a time travel story, but done in a way that only Gibson could: Almost believably, in a way that hewed harshly to its own internal logic, and felt both hopeful and catastrophic at the same time.

Ditto Agency: Same stuff, new packaging. We are introduced to "app whisperer" Verity Jane, just coming out of her 15 minutes of fame as the (now ex) girlfriend of a billionaire VC guy and trying to get back to work. She finds a gig beta-testing a new artificially intelligent digital assistant for a San Francisco start-up; they give her a stylish pair of steel-frame glasses, an earpiece and a phone. Inside them lives a cutting-edge AI just eight hours old. Her name is Eunice.

Cut to: The Future. Our London friends from The Peripheral are back — Detective Inspector Ainsley Lowbeer, her man Wilf Netherton, the whole gang. Lowbeer is curious about a particular historical "stub" that has just been opened — a split from the main trunk of time, reachable only in terms of data being transferred back and forth (which is how all Gibsonian time travel works).

And this is where Agency gets weird, because this is where you realize that the world they're talking about is our world, just a couple years in the past. An alternate 2017 where Brexit didn't happen and Hillary Clinton won the election due to a downtick in Russian election meddling; where trouble is brewing between Turkey and Syria and the flashpoint is a small border town called Quamishli — and where a small, start-up company has recently gotten their grubby little hands on some experimental military AI tech that they're trying to pass off as (you guessed it) a brand new digital assistant.

... his stories these days are all about highly competent people being brought together to solve a problem — drawn in like rays inevitably converging, arriving just before everything explodes.

Eunice (in 2017) becomes the entry point for Lowbeer, Netherton and the rest — an intelligent system that they can speak to and use as a proxy, trying to get their fingers into a new stream where some of the worst early signs of The Jackpot (the fracturing of the UK, the election of Donald Trump) didn't happen. They can't make things any better for themselves — they've already lived their own terrible history — but they can improve things in those stubs where they can get in early enough and make small changes for the better. Technology, design, intellectual property and market dynamics: In Gibson's worlds, these things have just as much socio-political weight as wars and elections. They shape the potential of the world in equally fundamental ways. The battle over Eunice's artificial intelligence — and her individual agency — is waged physically, in the market, by lawyers. If she falls into the wrong hands, the results could be catastrophic. Meanwhile, the possibility of nuclear war in the Middle East hums along, barely noticeable in the background.

Agency oscillates back and forth between Lowbeer's and Netherton's future London and Verity Jane's present. He uses this tick-tock ratcheting of tension and brief, bright flares of action to move the plot — an extended, punctuated chase scene that starts early and continues through 400 pages. Verity and Eunice are the rabbit. The hounds are contract assassins, military contractors, tech-bros in over their heads. And Gibson, in his Gibsonian way, just keeps winding the wire around his explosive core, looping in gig-economy surveillance applications, outlaw makers, a barista, a time-traveling robot, a housewarming/launch party complete with helicopter assault.

But there's no boom. His bomb ticks and ticks, then hangs there, suspended between hope and catastrophe, because his stories these days are all about highly competent people being brought together to solve a problem — drawn in like rays inevitably converging, arriving just before everything explodes. His conflicts are intellectual, occasionally solved by the swift application of overwhelming violence, but more often seeing victory come as the natural result of more intelligent systems processes; through more effective usage of human capital and resources. And the good guys win simply because they are smarter and geekier and just so much cooler than the bad guys could ever hope to be.