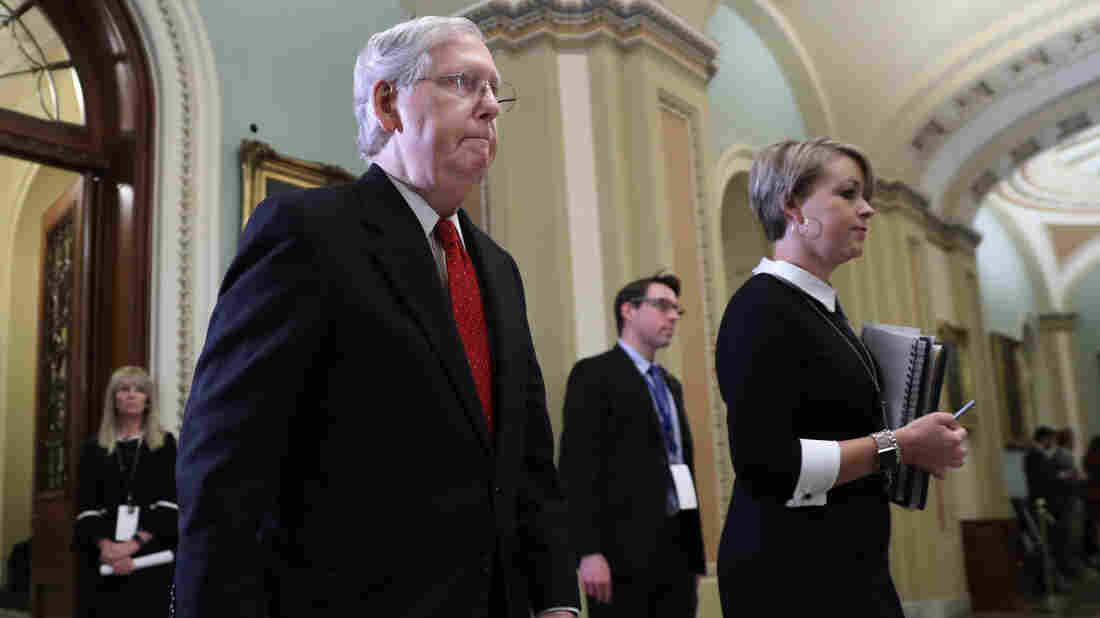 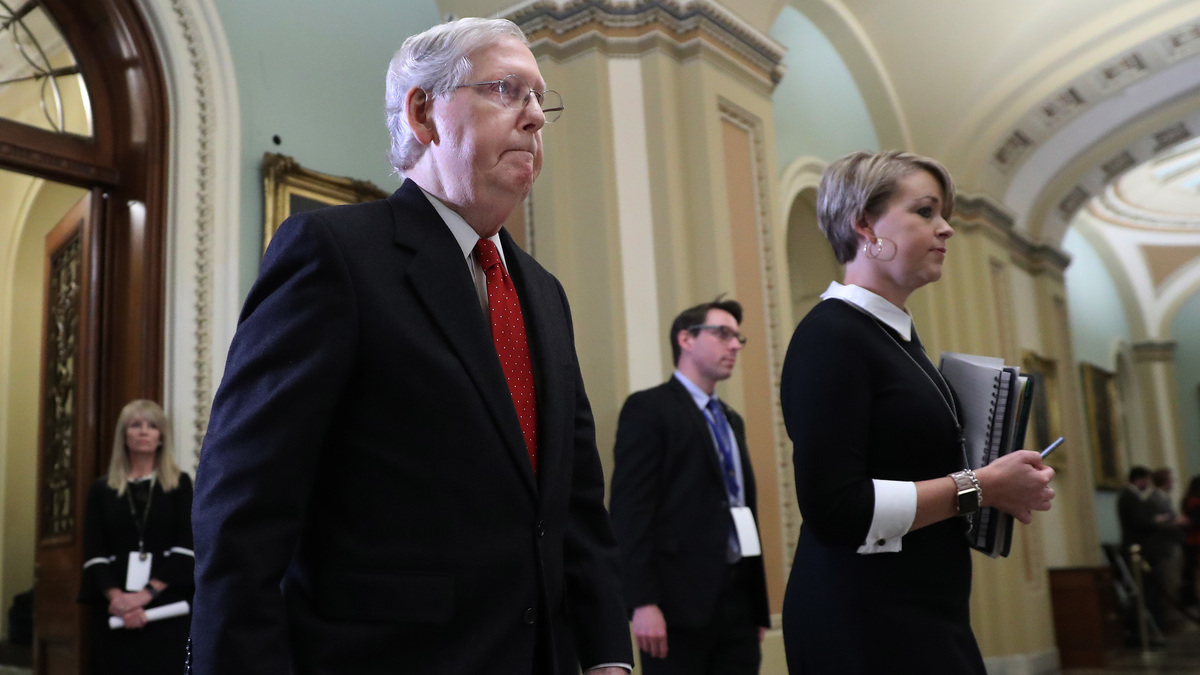 Senate Majority Leader Mitch McConnell, R-Ky., walks out of the Senate Chamber before the start of President Trump's impeachment trial on Tuesday.

After a long day and night of dueling between the House managers calling for impeachment and attorneys for President Trump declaring the articles of impeachment "ridiculous," the Senate adopted a set of rules that will govern its impeachment trial, in which opening arguments will get underway Wednesday.

The resolution, put forward by Senate Majority Leader Mitch McConnell, calls for each side to receive up to 24 hours to argue their case, spread over three days.

The measure was approved on a 53-47 party-line vote after senators rejected 11 different amendments offered by minority Democrats. Those amendments called on the Senate to subpoena records and documents from various agencies, including the State Department, the White House Office of Management and Budget and the Defense Department. The Trump administration had refused to turn over most of the documents to House investigators.

McConnell, R-Ky., released his resolution outlining the next steps, including a week of hours-long opening arguments, on Monday. By Tuesday, ahead of the debate, Senate leaders made additional changes to the trial timeline.

The back-and-forth is a culmination of disagreement between Democrats and Republicans over what would constitute a fair trial. The Democratic-led House voted in December to impeach President Trump but held off on transmitting the two articles of impeachment in an attempt to get more details on the trial rules. House Speaker Nancy Pelosi, D-Calif., ultimately moved the process forward without the assurances Democrats sought.

McConnell needed a simple majority — 51 votes — to approve his resolution laying out how much time House impeachment managers and the president's defense team will get to make their arguments. The Republicans hold 53 seats in the Senate.

McConnell said he would move to table any Democratic amendments to the resolution.

Later Tuesday afternoon and into the night, he did just that. He called for a vote to table, or kill, several amendments proposed by Schumer that would have subpoenaed records of communications related to White House officials, National Security Council personnel and other Trump administration officials who have direct knowledge of "key events in question."

The amendments were killed on party-line 53-47 votes.

McConnell maintains that he based his plan on the rules for the impeachment trial of President Bill Clinton in 1999, with each side getting 24 hours. In a last-minute change, McConnell called for the 24 hours to be divided over three days, rather than two as he originally proposed. That would address one Democratic complaint — that a two-day limit would force the session to last long into the night, since the trial days do not start until 1 p.m. ET.

McConnell also altered the rules for admitting the House evidence into the record. It is now automatically part of the record, rather than senators having to vote to include it.

Apparently, these were not only concerns for Democrats.

According to a spokeswoman for Sen. Susan Collins, R-Maine, "Senator Collins and others raised concerns about the 24 hours of opening statements in 2 days and the admission of the House transcript in the record. Her position has been that the trial should follow the Clinton model as much as possible. She thinks these changes are a significant improvement."

Will there be witnesses?

The resolution also delineates how much time senators will get for written questions, and it postpones the debate and vote over whether to call witnesses until after both sides have made their presentations and address questions.

House impeachment manager Adam Schiff, D-Calif., also argued against the rules resolution, while calling on the Senate to allow testimony from new witnesses. He played senators a tape of Trump saying he would "love" to hear testimony from Secretary of State Mike Pompeo, acting White House chief of staff Mick Mulvaney and others (even though White House officials have so far been barred from testifying).

Even Senate Republicans like Sen. Mitt Romney of Utah, who said he was open to hearing from witnesses like former national security adviser John Bolton, said that he backed McConnell's resolution and that "if attempts are made to vote on witnesses prior to opening arguments, I would oppose those efforts."

Referring to Trump's July phone call with Ukrainian President Volodymyr Zelenskiy, Sekulow asked, "Why are we here? Are we here because of a phone call? Or are we here, before this great body, because since the president was sworn into office, there was a desire to see him removed?"

Schiff responded that he would not suggest that Cipollone "would make a false statement," but he said Cipollone was "mistaken."