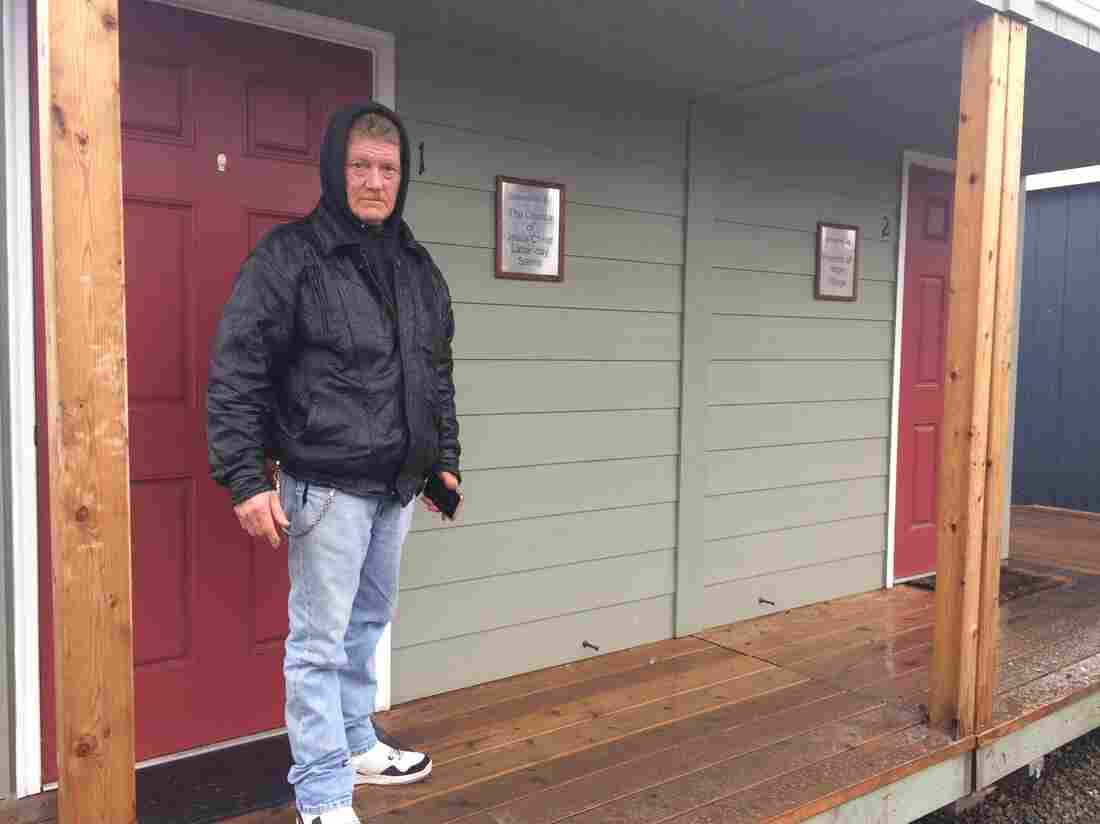 Buckshot Cunningham lived without housing for years before he moved into a small cottage at Hope Village, a shelter run by the nonprofit Rogue Retreat in southern Oregon. April Ehrlich/Jefferson Public Radio hide caption 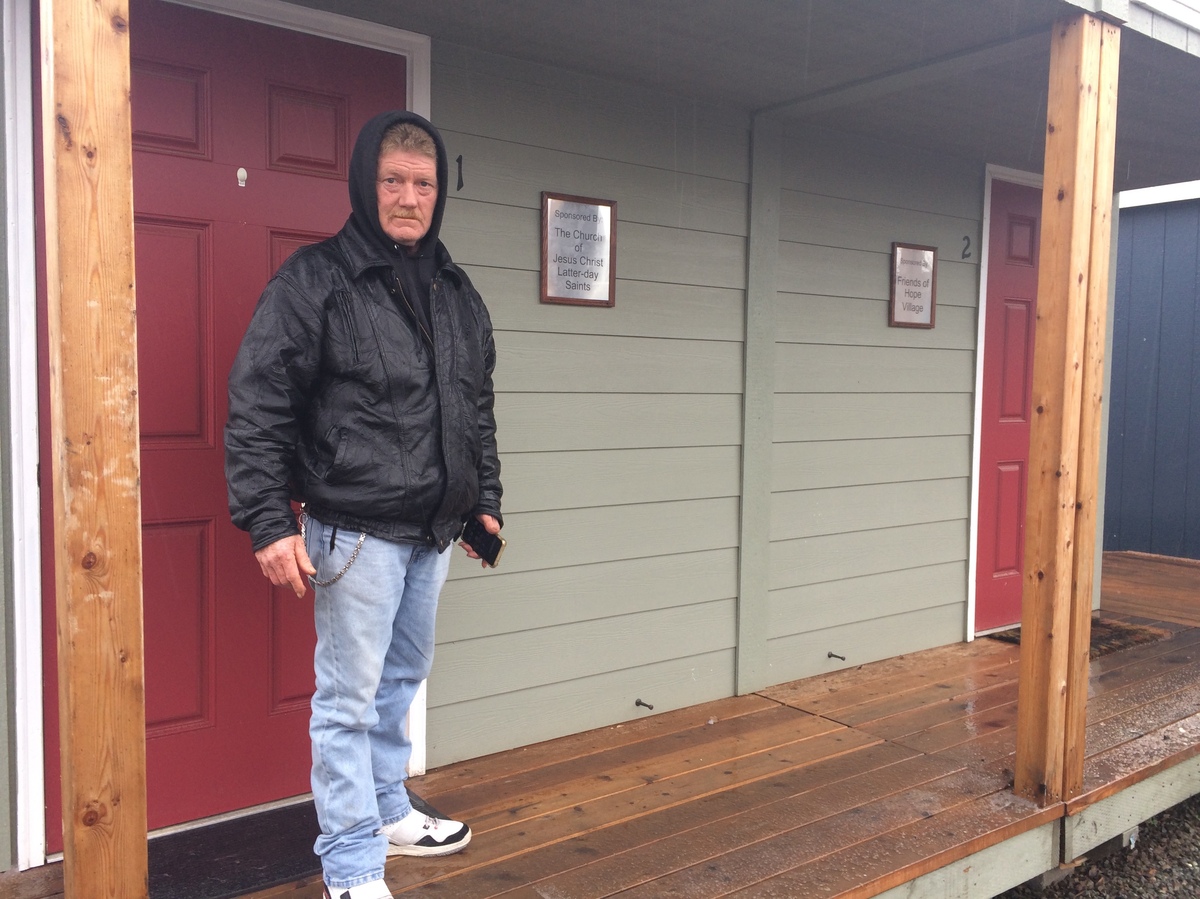 Buckshot Cunningham lived without housing for years before he moved into a small cottage at Hope Village, a shelter run by the nonprofit Rogue Retreat in southern Oregon.

Chilly winds and hail don't bother Buckshot Cunningham, who lived outside without a shelter for years until he came across Hope Village in southern Oregon.

"This is my umbrella," he says as he shrugs on the hood of his coat while walking into a mid-January winter storm.

Hope Village is run by Rogue Retreat, a nonprofit serving low-income people in Medford, Ore., near the border with California. It's a collection of about a dozen small cottages with a communal kitchen, dining area and bathrooms.

This is what housing advocates call a low-barrier shelter, with few rules and requirements to get in. There are some behavioral rules — you can't be violent or do drugs on the premises — but you don't have to be sober when you come in and you can bring your family, partner or dog.

"Twelve years of drugs and alcohol" is how Cunningham says he became homeless. But there's a bit more to his story: A career as a firefighting smokejumper left him with physical disabilities. He lost his son to suicide, then his wife to cancer.

"And I just went downhill from there," he says.

Homelessness is often seen as an urban issue, but rural areas along the West Coast are also struggling with large homeless populations. Many of these areas don't have the resources for shelters like Hope Village, but even when they do, they're sometimes reluctant to build them.

Just across the state border in rural Northern California, Shasta County had earned a $1.6 million grant to help fund a similar low-barrier shelter. County supervisors considered its proposal last winter when they heard from Police Chief Michael Johnson from the city of Anderson.

"It is just another enabling mechanism for the homeless, the transients and the displaced people here," Johnson told the board in February 2019. "When you create something and enable people, you're going to attract more."

Shasta County supervisors pushed the project back several times, citing their concerns about crime and a fear that services such as this would attract more homeless people. So Johnson proposed an alternative: a detention facility to house people who have committed low-level crimes such as public drinking, urinating in public or sleeping in public spaces, which are sometimes unavoidable for people without homes.

Johnson says incarceration can be used as a tool to provide services to people who are homeless and struggling with drug addiction or mental health issues.

Building A New Community For The Rural Homeless

"That's our opportunity to try to get that particular person involved in a program that will turn their life around and help them," Johnson says. "That's when they're most vulnerable, when they're the most willing to accept help and possibly agree to go into a program like that."

"Jail is a resource because when they come [to jail], there may be opportunities to become sober. And once they become sober, they tend to start to think differently," Sickler says. "Maybe they would see a benefit to taking advantage of available services."

Sickler and Johnson say they don't want their rural communities to become like San Francisco or Los Angeles — overwhelmed with large homeless populations. They say providing free housing to homeless people is an urban approach, and it isn't working. Instead they emphasize law and order: bigger jails and more police officers.

Tristia Bauman of the National Law Center on Homelessness & Poverty disagrees with that emphasis. "That is not only an ineffective approach — it's also the single most expensive approach," she says.

Bauman says "housing first" initiatives — that is, giving homes to people with few strings attached — is the best way to address homelessness.

"It produces better outcomes," Bauman says. "Not only in health, but also in education. And importantly to any lawmaker: It saves communities money. In fact, it is the cheapest and most effective intervention, and that is established by a number of national studies."

Similar to the shelter proposal in Shasta County, Hope Village in Oregon faced some pushback in its early stages a few years ago. Some people feared that it would increase crime and generate litter.

But resident Buckshot Cunningham says those fears proved to be wrong.

"Look at this place," he says, motioning to the neat row of cottages. "It's clean; it's beautiful. And it stays that way seven days a week, all year round. It's pretty simple."

Cunningham has had his own room here for about four months. Now he's sober, has a girlfriend and is saving money to rent an apartment.

"Getting my feet back on the ground here has enabled me to get back to society," he says. "Making me better myself. Not making me, but helping me want to."