Accessibility links
After Volcano Quiets, Philippine Officials At Odds Over Residents' Return The vice mayor of a town located near Taal Volcano, which began spewing ash and steam last week, has urged people to defy warnings from authorities and to "come back and clean up."

After Volcano Quiets, Philippine Officials At Odds Over Residents' Return

After Volcano Quiets, Philippine Officials At Odds Over Residents' Return 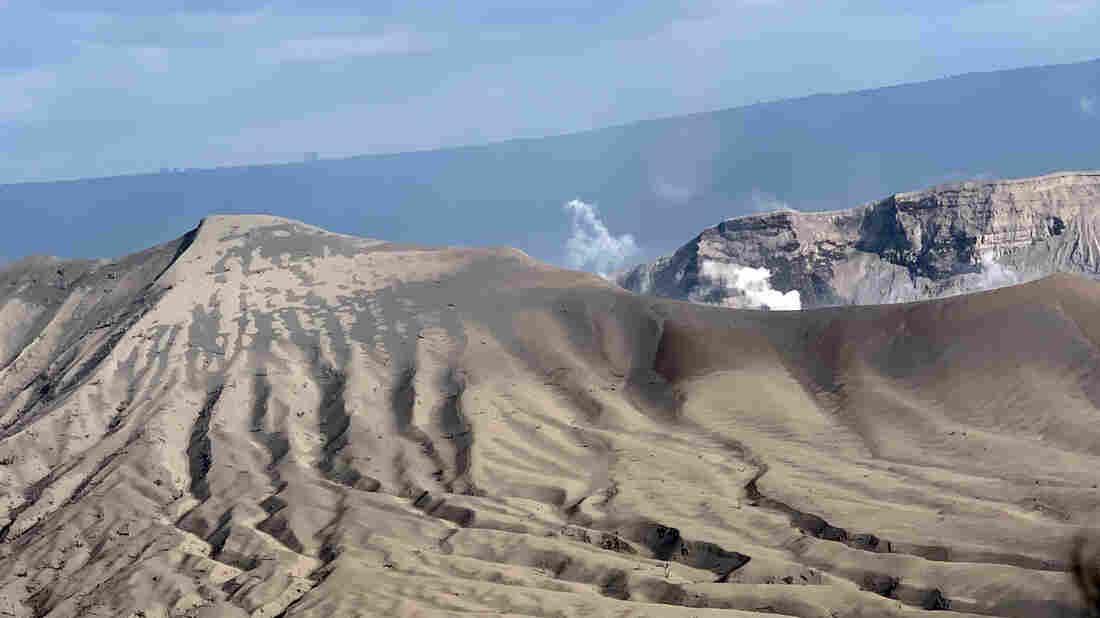 An aerial view of the smoking Taal Volcano as seen from a Philippine Air Force helicopter on Tuesday. Julie McCarthy/NPR hide caption

Scientists in the Philippines are defending their assessment of a volcano that has been spewing ash for more than a week after a local official demanded that they change their "opinion" of the danger it poses and urged people to defy authorities and return to their homes.

The vice mayor of the town of Talisay, located within a 9-mile zone around the Taal Volcano that has been subject to evacuation, criticized the Philippine Institute of Volcanology and Seismology (Philvolcs), questioning the science of predicting volcanoes.

In an interview on Manila's DZMM news radio on Monday, Charlie Natanauan referred to an earlier eruption of Taal in 1965 that killed an estimated 200 people.

"Back in 1965, that was strong; it had lava, but now it's just ash," he said, according to a translation by Rappler, a Philippine news website.

"[It's] just blowing off steam after 50 years," he said. "Philvolcs, meanwhile, predicts the end." 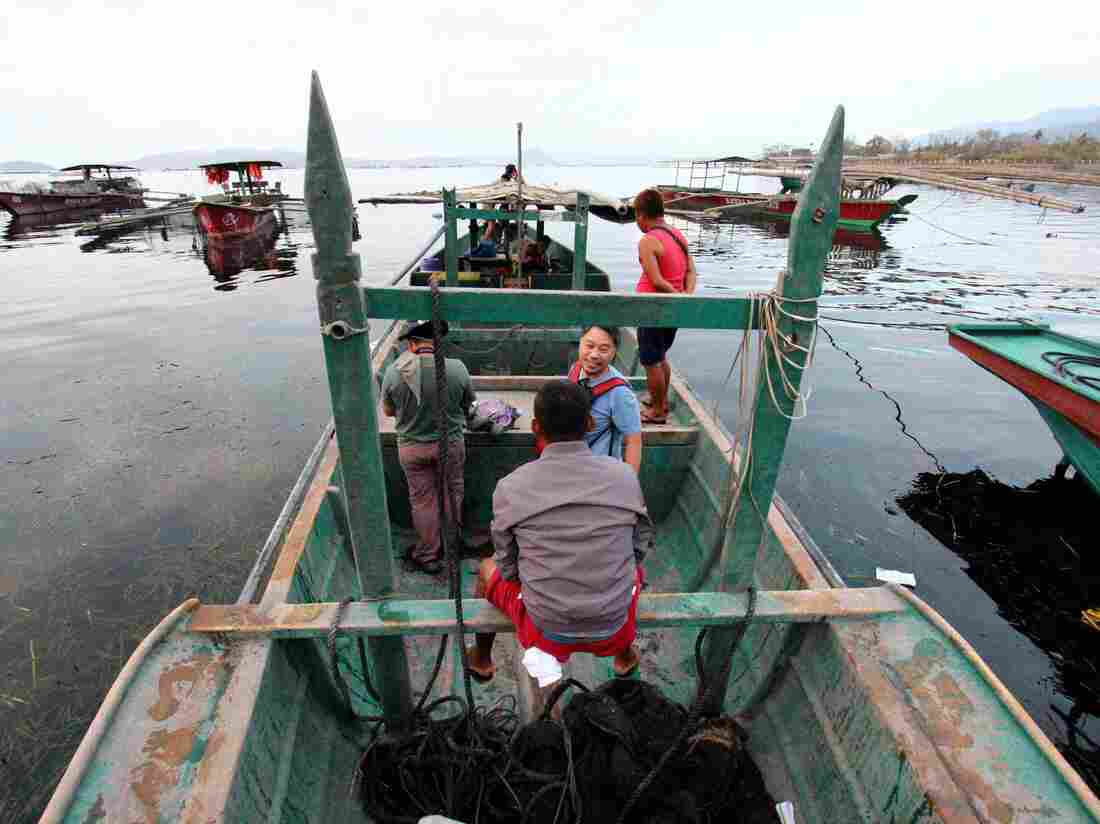 Fishermen head to Taal Volcano Island to rescue their horses and other livestock in Talisay, Batangas, on Sunday. Gregorio B. Dantes Jr./Pacific Press/LightRocket via Getty Images hide caption 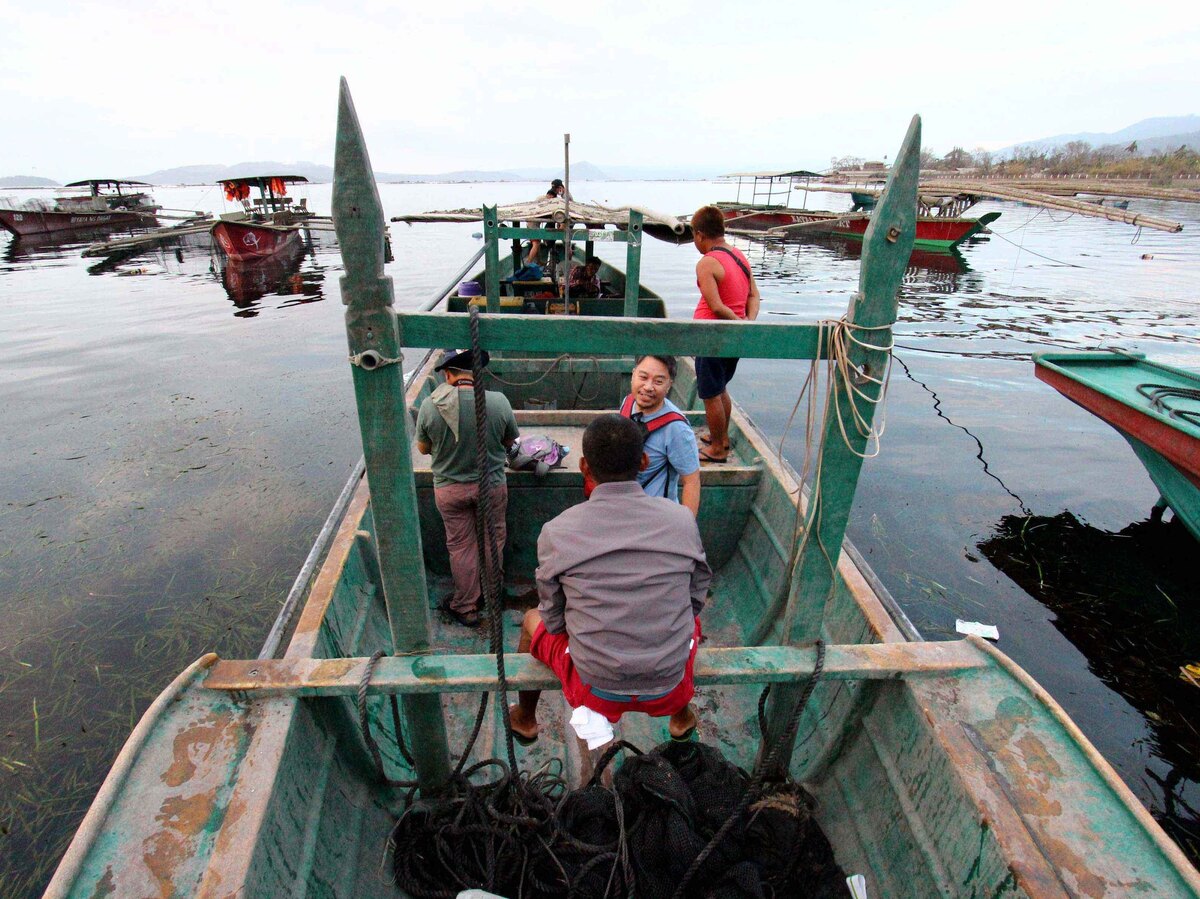 Fishermen head to Taal Volcano Island to rescue their horses and other livestock in Talisay, Batangas, on Sunday.

An aerial view of the volcano during a flyover Tuesday aboard a Philippine Air Force helicopter showed Taal in a relatively calm state. White wisps of plumes replaced the towering columns of steam and gas that belched out of the volcano when it erupted less than two weeks ago. 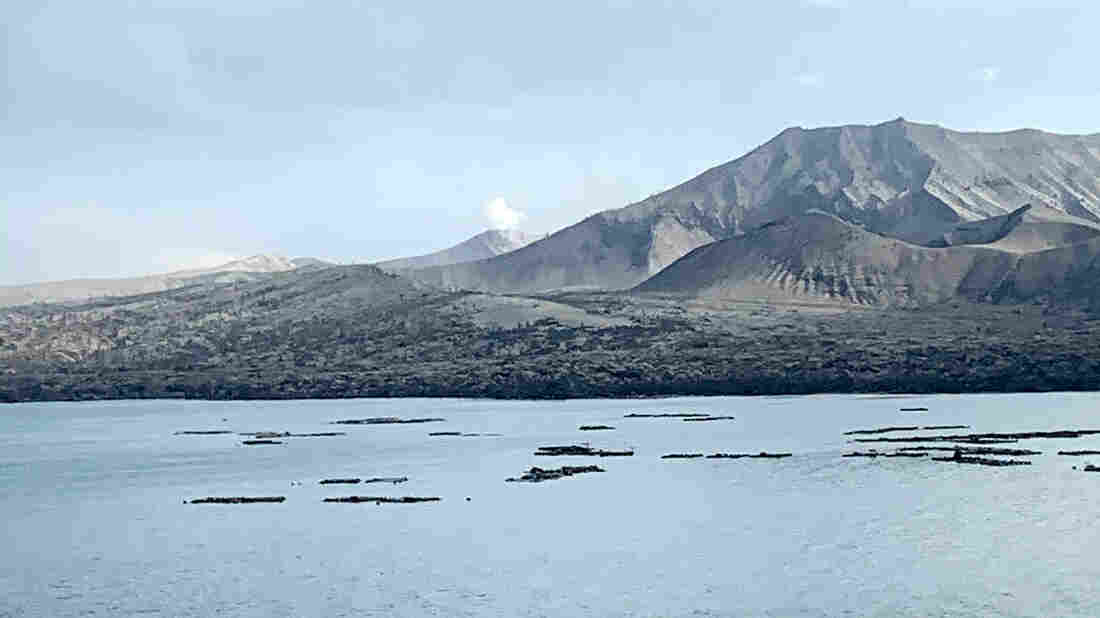 An aerial view of the Taal Volcano and the surrounding town of Talisay. Julie McCarthy/NPR hide caption 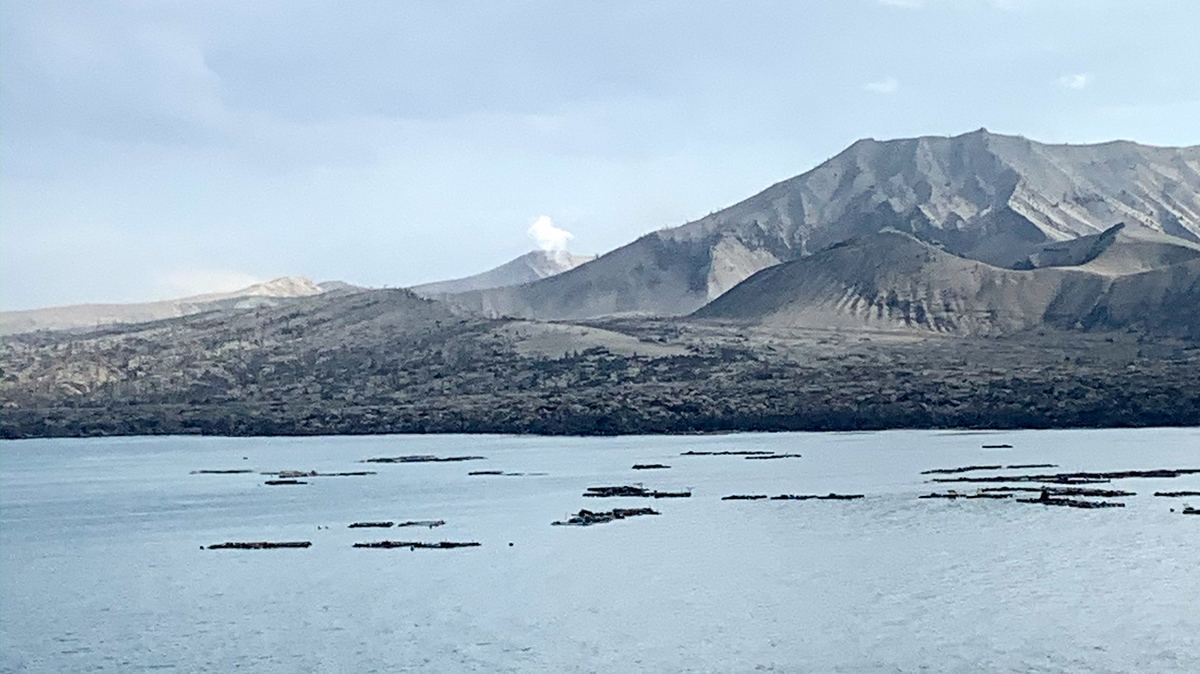 An aerial view of the Taal Volcano and the surrounding town of Talisay.

The ashfall that has covered dozens of towns and villages has all but ceased. Acre upon acre of slopes wear a billowy beige ash, as if someone threw a cashmere blanket over the island. But bank around a corner and you see deep ridges breaking the smooth surface — fissures that volcanologists say indicate magma intruding through Earth's layers, pushing its way up through the volcano's belly to the surface.

Natanauan mocked the institute's director, Renato Solidum, who reiterated on Monday that there were signs of magma "recharging" under the volcano that "could cause a strong explosion."

"Why did he say that? Is he God?" Natanauan told DZMM.

"I urge you to come back and clean up," he said, addressing the townspeople forced to flee Talisay last week. "They can sue me if the volcano erupts; I'll be one of the dead anyway. Can they take care of a population of 70,000 for an extended period? I don't think so. Some are already going hungry." 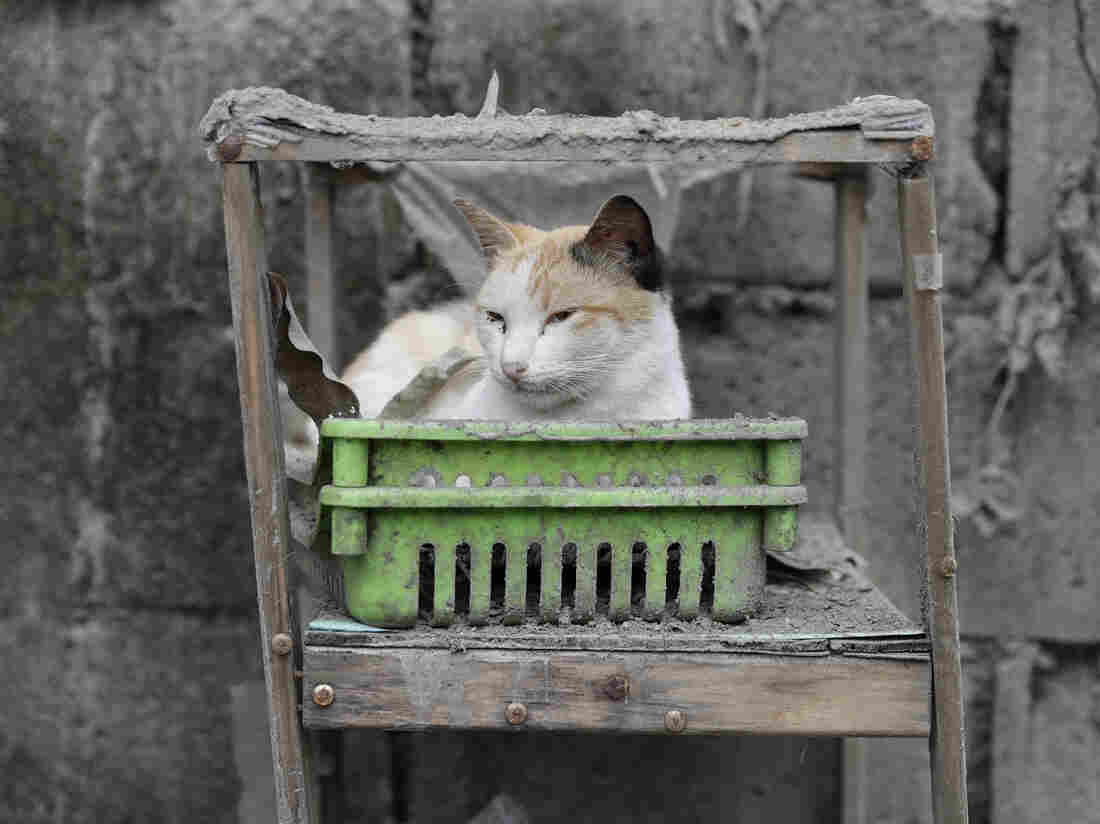 A cat rests on furniture that is covered in volcanic ash at a town near Taal Volcano in Tagaytay, Cavite province, southern Philippines, on Sunday. Aaron Favila/AP hide caption 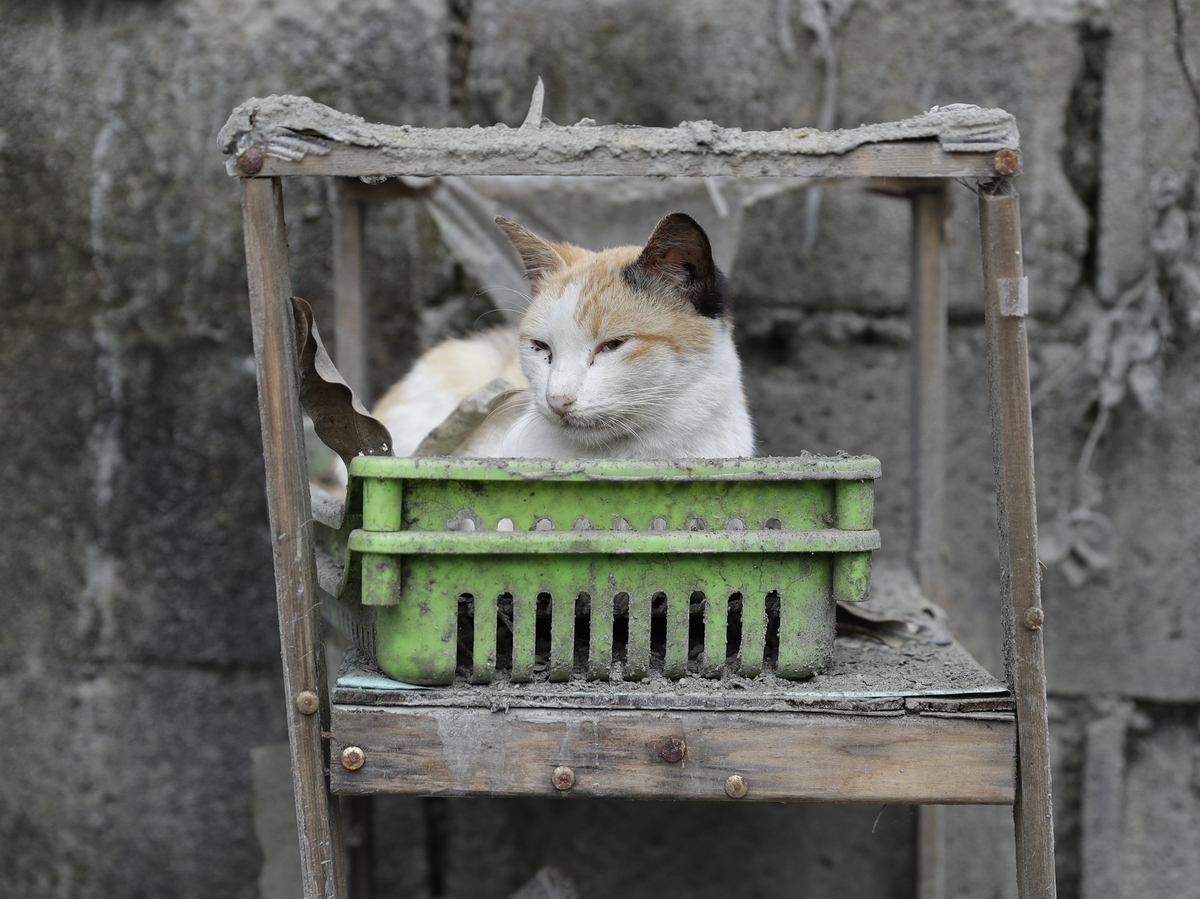 A cat rests on furniture that is covered in volcanic ash at a town near Taal Volcano in Tagaytay, Cavite province, southern Philippines, on Sunday.

But the officer in charge of the regional relief efforts, Elias Fernandez, urged the public on Tuesday to "ignore" Natanauan. Taking a hard line on any mayor trying to skirt the stay-away order, Fernandez told journalists at Basilio Fernando Air Base in Bantagas province, the worst-hit by the volcano, that "if the local chief executives concerned refuse to heed the advice [not to return home] we will issue them show cause orders if necessary."

"After all," Fernandez said, "it's the law. They are accountable for their actions."

Authorities have imposed a strict lock-out of the towns and municipalities within the danger zone of the volcano.

The Taal Volcano, located about an hour's drive south of the capital, Manila, sprang to life on Jan. 12, sending plumes of ash and steam thousands of feet into the sky and covering the countryside for miles around in a blanket of thick ash.

After the initial eruption, the Philippine Institute of Volcanology and Seismology raised the warning level to 4 out of 5, saying that a much more dangerous eruption could occur "within hours or days."

The warning triggered a massive evacuation from Batangas province, where Talisay is located, and from neighboring Cavite province.

And 23,188 families, or 94,403 people, are housed outside such centers, usually with relatives. But many turn up at evacuation centers anyway in search of food.

Some 15,000 such evacuees showed up last week at the sprawling National Shrine of St. Padre Pio in the city of Santo Tomas, just beyond the 9-mile danger zone around the volcano. Father Froilan Carreon helps run the center, which is exceptionally well-equipped by Taal disaster standards. He told NPR on Tuesday that, for now, they can only concentrate on the 500 people who have settled at their center and must turn away the "walk-ins." He worries they will be forced to "wander, looking for food" and that "the government should improve that."

With no recourse, they may well yearn to return home and then act on it.

On Tuesday, the Volcanology Institute held a news conference to discuss the situation and to address the concerns of local officials, such as Talisay's vice mayor.

Maria Antonia Bornas, chief of the Philvolcs Volcano Monitoring and Eruption Prediction Division, said she "understood" that Natanauan "is under so much stress."

"We would like to respect the vice mayor's feelings, but at the same time, we are firm in our science that we are doing our best," Bornas told reporters.

After evacuations went into full swing late last week, Bornas announced that the volcano had experienced a calming and that a hazardous eruption might not happen "for a considerable period of time."

That created a dilemma for the people living near the volcano, who have been forced to leave their property and livestock, and the authorities who ordered them away. Some residents have already defied government orders and returned home.

"We understand their plight," Bornas said at Tuesday's news conference. "We are working doubly hard so we can give them the best information."

"We will be the first one to say if it's safe to go back because we have [the evacuees] in mind all the time," she added.

Meanwhile, Interior Secretary Eduardo Ano told officials in Batangas province over the weekend that they need to permanently relocate some 6,000 families living in four villages along the slopes of the 1,020-foot Taal Volcano, now declared a "no man's land."

The area, which is home to farmers, fish pen operators and tourist guides, has long been designated a danger zone by the government because of the proximity of the volcano. Officially, no one is allowed to live there, but that injunction has received lax enforcement over the years.

"We have to enforce these regulations once and for all because their lives are at stake," Ano said Sunday, according to The Associated Press.

Taal is among the most active volcanoes in the Philippines, which sits on the "Ring of Fire," an area of elevated volcanic and seismic activity that circles the Pacific Ocean. Taal last erupted in 1977. In a 1911 eruption, it killed 1,335 people.