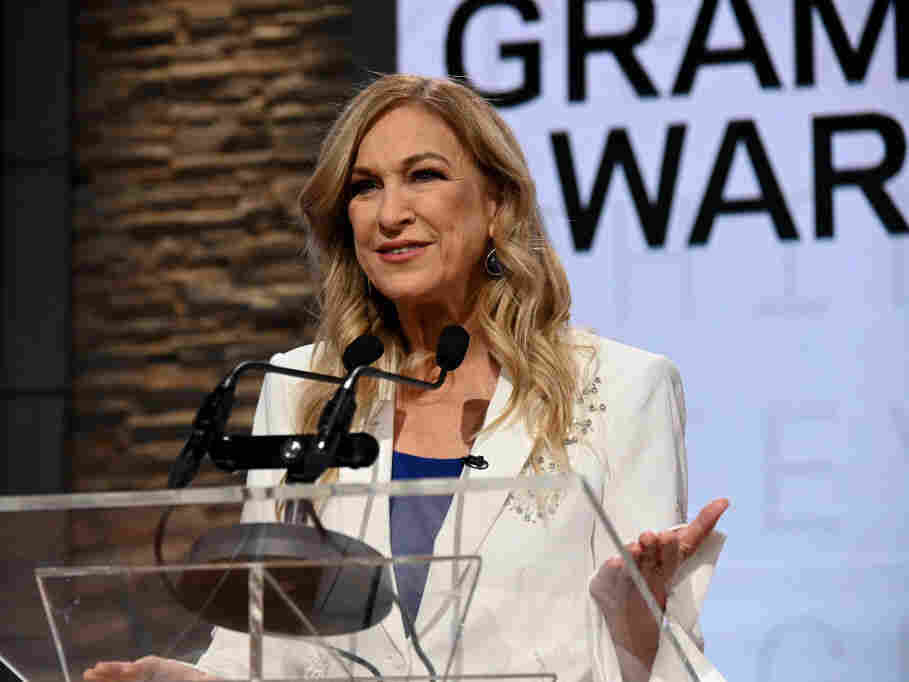 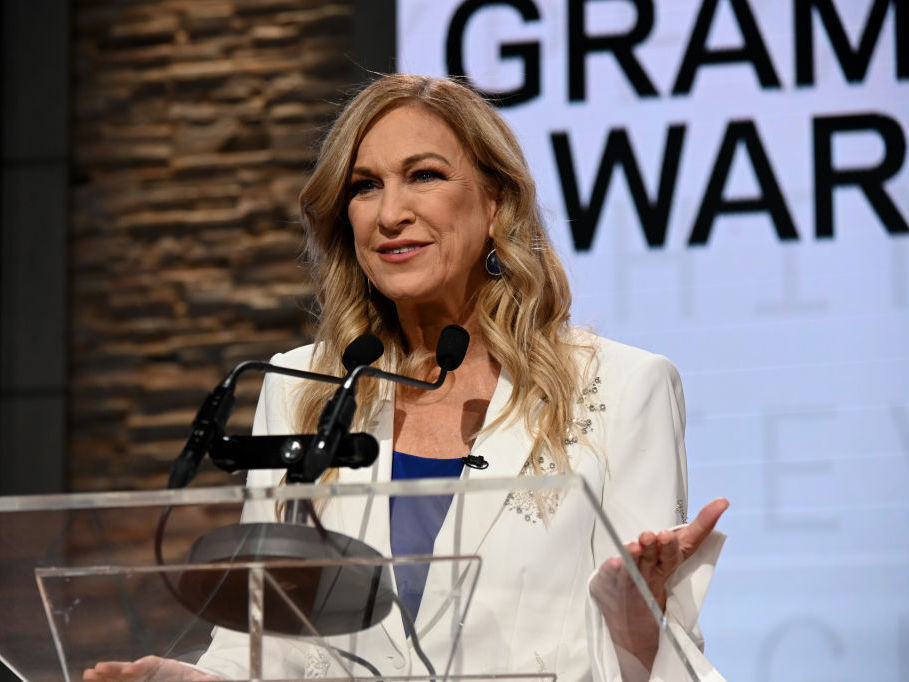 In the latest round of chaotic volleys around the Grammy Awards, the Recording Academy's short-lived president and CEO, Deborah Dugan — the organization's first female chief executive — announced Tuesday afternoon that she has filed a discrimination complaint with the Equal Employment Opportunity Commission (EEOC) against the Academy, the organization that gives out the Grammys.

The EEOC complaint includes several bombshell accusations, including that her predecessor, Neil Portnow, raped a female artist in New York; that she was pressed to hire Portnow as a consultant for $750,000 by the Academy's then-board chair, John Poppo; and that the Academy's general counsel and former board chair, Joel Katz, sexually harassed Dugan in May 2019, as she was being courted for the top Academy job.

Both Neil Portnow and Joel Katz have denied Dugan's allegations. In a statement published by Billboard on Wednesday, Portnow said in part: "This document is filled with inaccurate, false and outrageous and terribly hurtful claims against me. ... The allegations of rape are ludicrous, and untrue. The suggestion that there was is disseminating a lie. The baseless complaint about my conduct referenced in the EEOC filing was immediately brought to the attention of the Board of Director's Executive Committee. An in-depth independent investigation by experienced and highly regarded lawyers was conducted and I was completely exonerated. There was no basis for the allegations and once again I deny them unequivocally."

In a statement sent to NPR, Katz's lawyer, Howard Weitzman, said in part: "Ms. Dugan's allegations of harassment and her description of a dinner at the steakhouse in the Ritz Carlton, Laguna Niguel are false, and Mr. Katz categorically and emphatically denies her version of that evening. .... Mr. Katz believed they had a productive and professional meeting in a restaurant where a number of members of the Board of Trustees of the Academy, and others, were dining. ... Mr. Katz will cooperate in any and all investigations or lawsuits by telling the absolute and whole truth. Hopefully Ms. Dugan will do the same."

Last Thursday, Dugan was put on administrative leave, just 10 days before this year's Grammy Awards telecast, which will take place on Sunday. She was announced as the organization's leader last May, and took up her post in August.

As recently as last month, Dugan was giving interviews in which she promised "a major restructuring" of the Grammys. The pledged changes included meeting concrete, measurable goals meant to add greater gender and racial diversity to the awards process, and to ensure voting and membership transparency across the awards, and the Academy.

In a statement issued Tuesday afternoon, her attorneys Douglas H. Wigdor and Michael J. Willemin said: "The complaint that we filed today against the National Academy of Recording Arts and Sciences (NARAS, the Academy's former full name) highlights tactics reminiscent of those deployed by individuals defending Harvey Weinstein."

Wigdor also represents a Jane Doe, one of the women who is slated to testify in the Weinstein trial, which is getting underway in New York.

The lawyers' statement continues: "The attempt by the Recording Academy to impugn the character of Deborah Dugan is a transparent effort to shift the focus away from its own unlawful activity. This blatant form of retaliation in corporate America is all too common, even post #MeToo, and we will utilize all lawful means necessary to ensure that those responsible are held accountable for their actions."

In the EEOC complaint, Dugan describes the Academy as a "'boys' club network where men work together to the disadvantage of women and disenfranchised groups in order to line their own pockets and maintain a firm grip on the Academy's dealings."

In a statement sent Tuesday evening to NPR, the Academy said: "It is curious that Ms. Dugan never raised these grave allegations until a week after legal claims were made against her personally by a female employee who alleged Ms. Dugan had created a 'toxic and intolerable' work environment and engaged in 'abusive and bullying conduct'. When Ms. Dugan did raise her 'concerns' to HR, she specifically instructed HR 'not to take any action' in response."

"Nonetheless," the Academy statement continues, "we immediately launched independent investigations to review both Ms. Dugan's potential misconduct and her subsequent allegations. Both of these investigations remain ongoing. Ms. Dugan was placed on administrative leave only after offering to step down and demanding $22 million from the Academy, which is a not-for-profit organization. Our loyalty will always be to the 21,000 members of the Recording Industry. We regret that Music's Biggest Night is being stolen from them by Ms. Dugan's actions and we are working to resolve the matter as quickly as possible."

In response, Dugan's lawyer sent NPR another statement on Tuesday evening that disputed the timeline presented by the Academy, saying in part that she had "repeatedly raised concerns throughout her entire tenure" and that unnamed artists and board members had raised the same issues to the organization. In addition, Dugan's lawyers said that on the morning she was placed on leave, the Academy offered her "millions of dollars" if she would drop her concerns, but only if she left within an hour. Dugan says that when she refused to accept that deal, she was placed on leave.

NPR asked the Recording Academy on Tuesday eveningf for a response to Dugan's version of the chronology. As of Wednesday morning, the organization had not answered.

Since Dugan was placed on leave, the Recording Academy and its erstwhile leader have exchanged dueling narratives in the trade press about the reasons behind the move.

But Dugan's camp argued to The New York Times the same day that the real reason for her dismissal was linked to a memo that she had sent the Academy's HR department three weeks prior, in which she voiced the concerns her lawyers referenced, including "exorbitant and unnecessary" legal bills — including some $15 million paid to two outside law firms between the years 2013 and 2017.

One of Dugan's attorneys, Bryan Freedman, tweeted on Friday: "What has been reported is not nearly the story that needs to be told. When our ability to speak is not restrained by a 28-page contract and legal threats, we will expose what happens when you 'step up' at the Recording Academy, a public nonprofit."

Freedman was referring to an infamous 2018 comment made by Dugan's predecessor, Neil Portnow, in which the former Grammy chief opined that women working in the music industry would need to "step up" in order to be recognized. (In 2002, Portnow replaced Michael Greene, who was forced to resign after allegations that he had sexually harassed and abused another Academy executive became public.) The New York Times identified the woman accusing Dugan as Portnow's former assistant, who claimed that Dugan has a "bullying" style of managing employees.

On Monday, the Academy alleged via Billboard that Dugan had offered to resign and drop her own accusations against the organization in exchange for a $22 million payout. Similar accusations were repeated by the Academy board president, Harvey Mason Jr., in a memo sent to Grammy members, in which Mason also claims that Dugan made her allegations only after the Academy began its investigation of her.

Most recently before her Grammys appointment, Dugan led Red, the nonprofit group dedicated to fighting HIV/AIDS across Africa that was co-founded by U2's Bono and Bobby Shriver. Before joining Red, Dugan was a lawyer, an executive at the EMI Record Group and a former president of Disney Publishing Worldwide.