Accessibility links
Turns Out Bankruptcy Can Wipe Out Student Loan Debt After All Many Americans who get overwhelmed by student loan debt are told student debt can't be erased through bankruptcy. Now more judges and lawyers say that's a myth and bankruptcy can help. 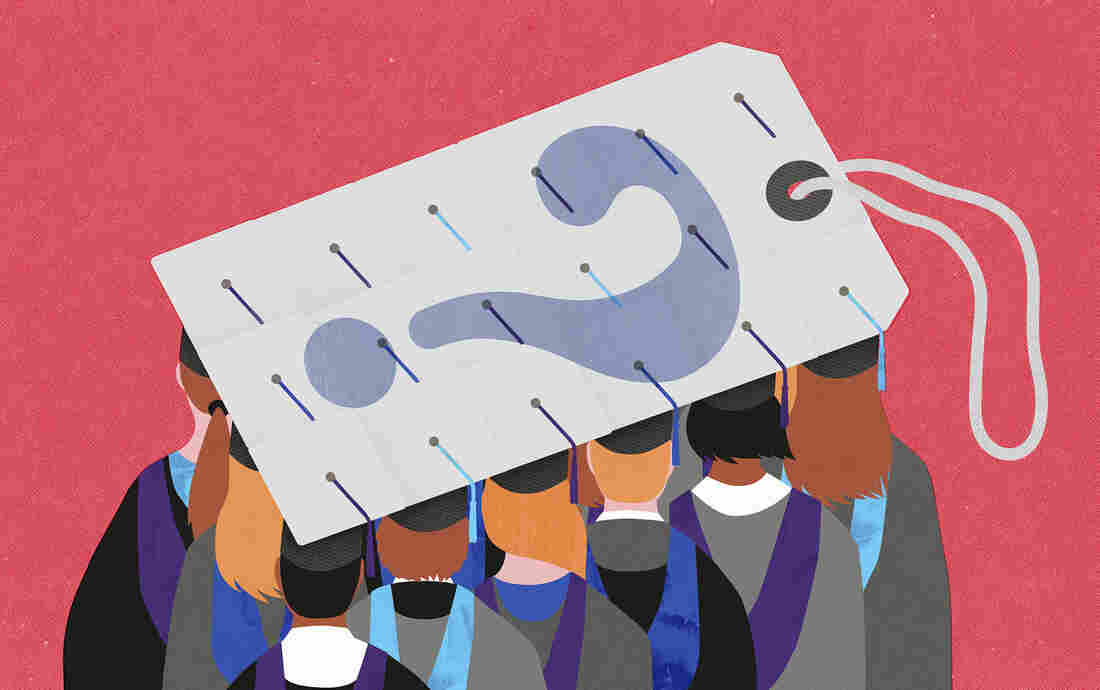 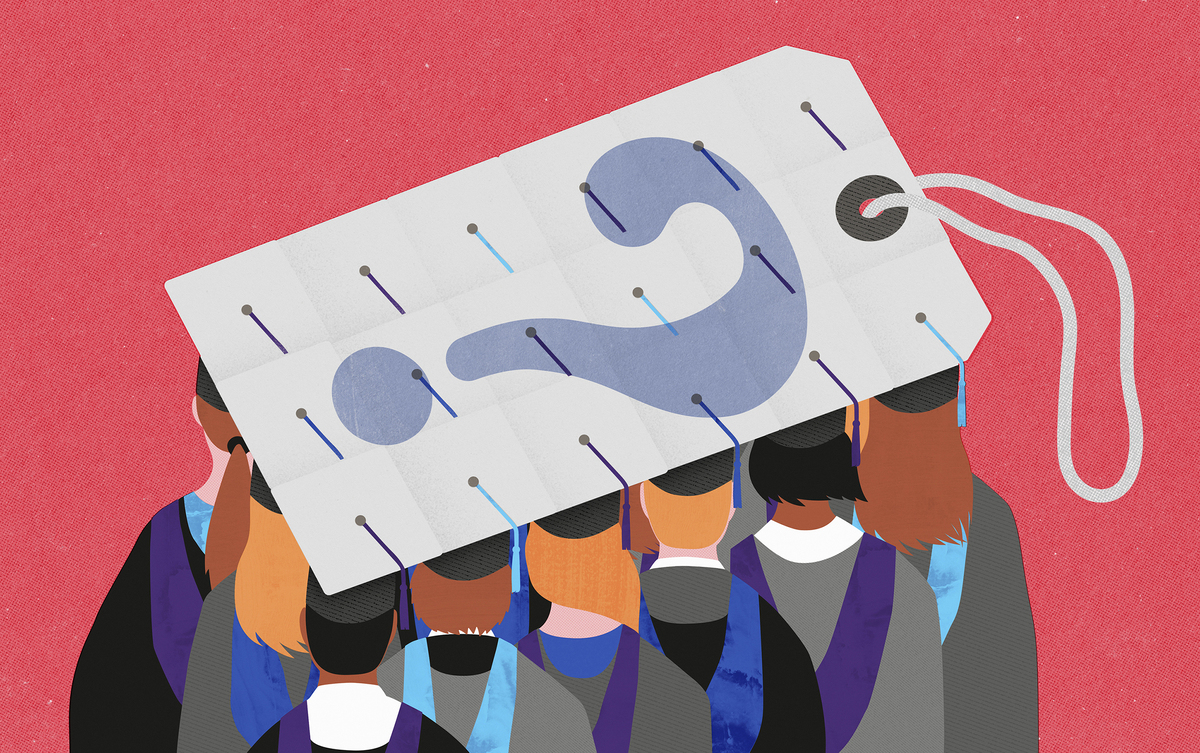 Many Americans who get overwhelmed by student loan debt are told that student debt can't be erased through bankruptcy. Now more judges and lawyers say that's a myth and bankruptcy can help.

A few years ago, Lauren had a big problem. The Queens, N.Y., resident had graduated from college with an art degree as the Great Recession had hit. She had private student loans with high interest rates. For work, all she could find were retail jobs. And by 2016, her loans had ballooned to about $200,000.

" 'I can't afford to actually pay my bills and eat and pay my rent,' " she remembers thinking. "I was financially handicapped. I mean, my student loan payments were higher than my rent was."

So Lauren started to look into bankruptcy. She doesn't want her last name used because she thinks all this might hurt her job prospects.

Over the years, a myth has taken hold that you can't get student debt reduced or wiped out through bankruptcy. But many bankruptcy judges and legal scholars say that's wrong. And bankruptcy can be a way to get help.

Bankruptcy is not fun. Your credit gets destroyed for years, and you have to be in pretty dire financial straits for it to make sense. But if you reach that point, you can get your debts reduced or erased through bankruptcy so you can get back on your feet.

But the lawyers Lauren called said that with student loans it's different because there are special rules for student debt.

"They had told me things like you have to have a disability where you're not able to even work," she says. "And I was like, 'Well, but that doesn't make any sense.' "

Jason Iuliano, a Villanova University law professor, says that over the past 30 years, Congress has made it harder to discharge student debt. You need to meet what's called an "undue hardship" standard. That also means more work for your lawyer.

But Iuliano says that this has created the misconception that it's nearly impossible to get help for student debt through bankruptcy. That's not true.

Iuliano did some research and says a quarter-million student loan debtors file for bankruptcy each year. They do that because they have credit card debt or other debts and they can get those reduced or erased.

But when it comes to trying to get their student debt forgiven, "more than 99% of the student loan debtors in bankruptcy just give up without even trying," Iuliano says. "It struck me as a really surprising statistic when I first uncovered it."

For those who do try, though, Iuliano's research finds that about half the time the person gets some or all of the student loan debt erased. One study he did found that they got help through bankruptcy about 40% of the time. And he says more recent data from this past year show that figure rising to more than 50% of the time.

"So I think that's really important for bankruptcy attorneys to see that there are judges out there who are willing to grant undue-hardship discharges and that people are much more likely to obtain relief in bankruptcy for their student loan debt," Iuliano says.

Just this month, a federal judge in New York discharged more than $220,000 in student loans for a borrower. In her ruling, Chief Bankruptcy Judge Cecelia Morris criticized the fact that even many lawyers "believe it impossible to discharge student loans." She added, "This Court will not participate in perpetuating these myths."

Robert Lawless, a law professor at the University of Illinois, says, "I think we're reaching a tipping point with what the bankruptcy courts are doing." He says he hopes more people are able to get help through bankruptcy.

But he says the rules are still too restrictive. Lawless researched the issue with a group of attorneys and former judges for the American Bankruptcy Institute, a professional organization. They're recommending that Congress rewrite the rules on student loans in bankruptcy. Under the proposal, Lawless says, "after seven years from when the loans became due, they would be treated pretty much like any other debt in a bankruptcy case."

There is at least some support for that in Congress. Part of the obstacle now is that the current rules often require paying your lawyer more money to attempt to get student debt forgiven.

Lawless says it costs on average about $1,200 to file a typical Chapter 7 bankruptcy case. Bankruptcy attorneys say it can cost thousands of dollars more to pay your lawyer to jump through the extra hoops related to student loan debt, unless you find one who will do that for a reduced rate.

Iuliano says the outcome and how much student debt is forgiven, if any, can have a lot to do with what particular judge you end up with and what the rules are in that bankruptcy district.

Some of that is because of the language of the original statute stating that student loan borrowers have to meet a threshold of "undue hardship," he says. Iuliano says Congress has never defined what that means, so a lot of discretion is left up to the courts and the particular judge you get.

Harrison Wadsworth, a consultant for the Consumer Bankers Association, notes that most student loans are issued by the government. But for loans from private lenders, he says relaxing the bankruptcy rules to make it easier to reduce or eliminate student debt could push up interest rates. "Lenders would have to be careful about making loans and probably have to charge more for them," Wadsworth says.

Lauren eventually found a lawyer who took her case and charged her about $3,000, doing some of the work pro bono. And going through bankruptcy, she got her debt reduced from about $200,000 to around $100,000, with the bulk of that reduced to a 1% interest rate.

"It's still a lot of money," she says. But she says, "I was extremely relieved."

Lauren says it is significantly less than she owed before. And she says the payments are manageable.

"And because they lowered the interest, I'm actually paying off the loan," she says. So she says she can recover financially, which Lawless says is what bankruptcy is there for.