Accessibility links
Northwest Salmon In Peril, And Efforts To Save Them Scale Up With Pacific Northwest salmon and steelhead on the brink of extinction, there are new efforts being brokered to save the famed fish. 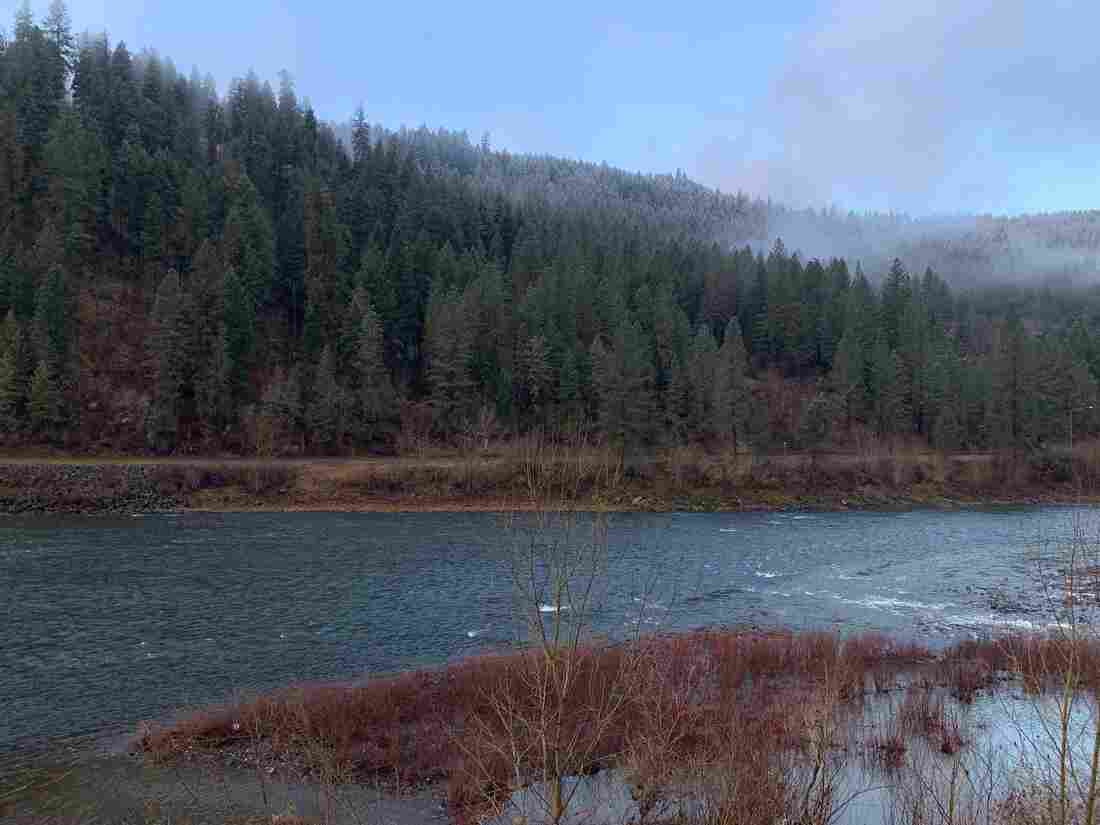 Morning on the Clearwater River near Orofino, Idaho. This past fall, Idaho officials closed the Clearwater to steelhead trout and salmon fishing due to extremely low runs. Kirk Siegler/NPR hide caption 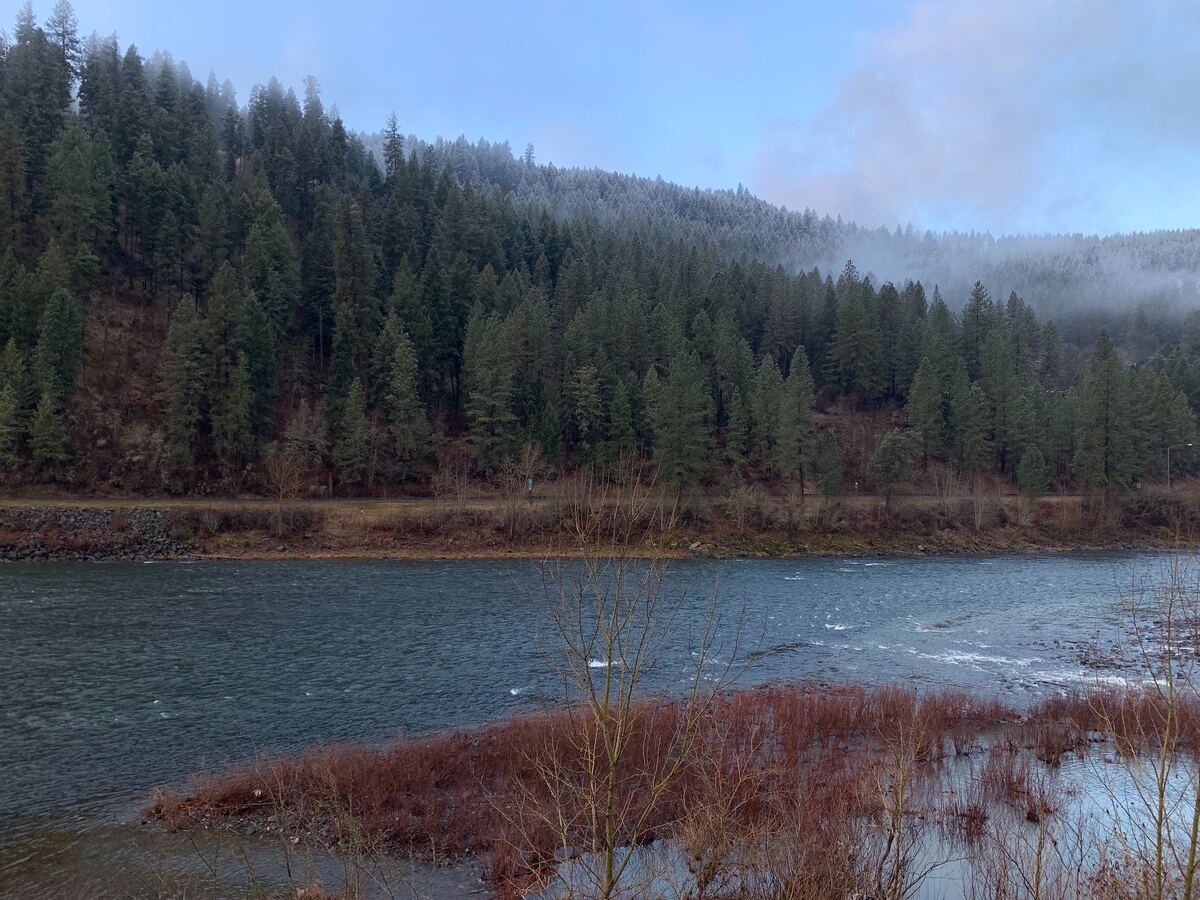 Morning on the Clearwater River near Orofino, Idaho. This past fall, Idaho officials closed the Clearwater to steelhead trout and salmon fishing due to extremely low runs.

This past fall, Idaho officials took the extraordinary step of closing the Clearwater River to salmon and steelhead trout fishing, leaving guides like Jeremy Sabus scrambling to find other work.

"It's six weeks of my favorite time of the year, you get to shake hands with 3-foot trout," Sabus says.

Billed as one of the top destinations for salmon fishing in the United States, the Clearwater cuts through steep gorges in northern Idaho before dumping into the Snake and eventually, Columbia rivers. Every year, salmon and steelhead make an epic 500-mile or longer journey upstream from the ocean to spawn.

But this winter their runs are among the lowest they've been in a century.

It's never been easy for the famed fish. They have to navigate a series of dams that support the region's hydropower grid and irrigation and barges for agriculture. These slow down river flows in places, warm the water and make the trout more vulnerable to predators.

But the situation is now being exacerbated by climate change, which is warming the Pacific Ocean and increasing acidity levels. One federal scientist recently estimated that if nothing more is done to save the salmon and steelhead across the Columbia River basin, some of the species will go extinct within 20 years.

This has added urgency in long-running efforts to save the salmon. It's also reopened a bitter, 30-year legal battle over the fish and the rivers it depends on.

"The problem is that now we're fighting an issue that we don't have much control over, the changing climate," says Lizzy McKeag, a field organizer with the Idaho Wildlife Federation.

On the Clearwater, the fishing closure was lifted a couple weeks ago, partly due to improved hatchery numbers, but most of the outfitters' clients had already canceled.

"I was just purely sad," Sabus says, referring to both the environmental and economic fallouts.

Standing on a concrete boat ramp near the town of Orofino, Sabus is washing off his fiberglass drift boat after a morning on the river. He's cobbled together a few guided trips here or there, but mostly it feels eerily empty here.

"Driving all the way from Lowell, Idaho, to Lewiston and not seeing any boats, in the 23 years I've been fishing I haven't ever seen that," Sabus says. 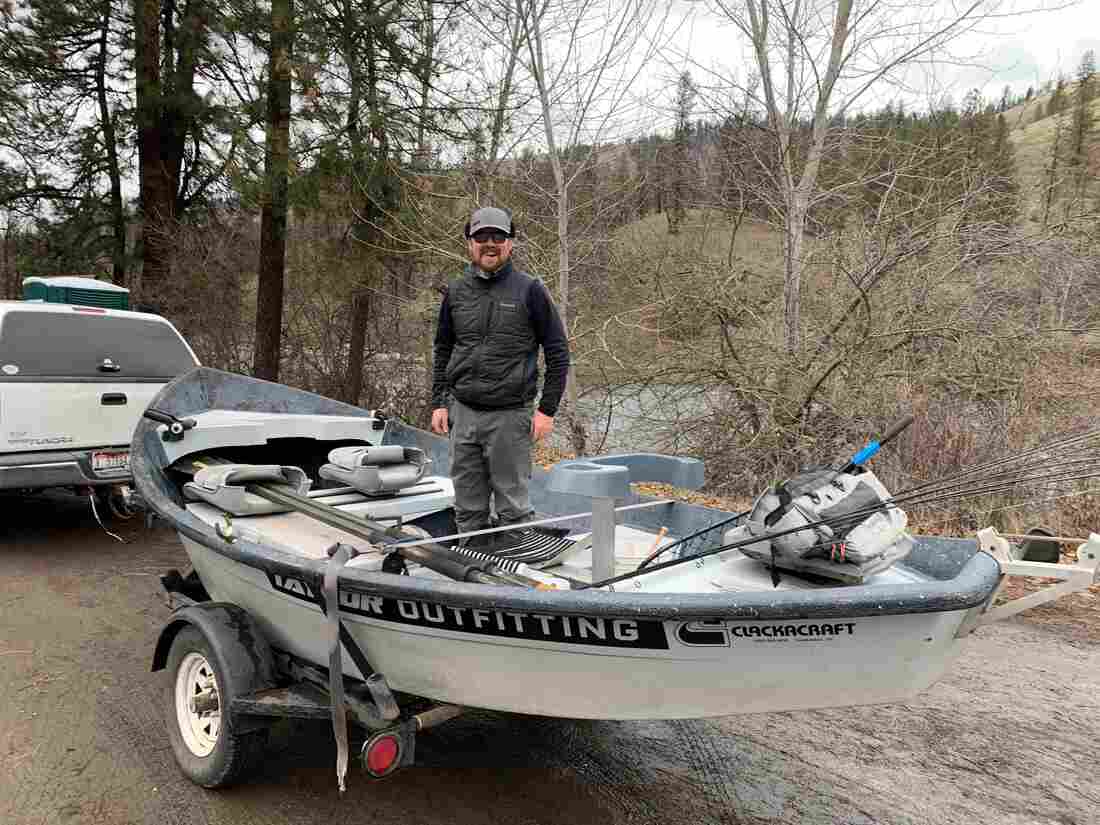 Jeremy Sabus has fished and guided on the some of the Northwest's most iconic trout streams for more than two decades. Kirk Siegler/NPR hide caption 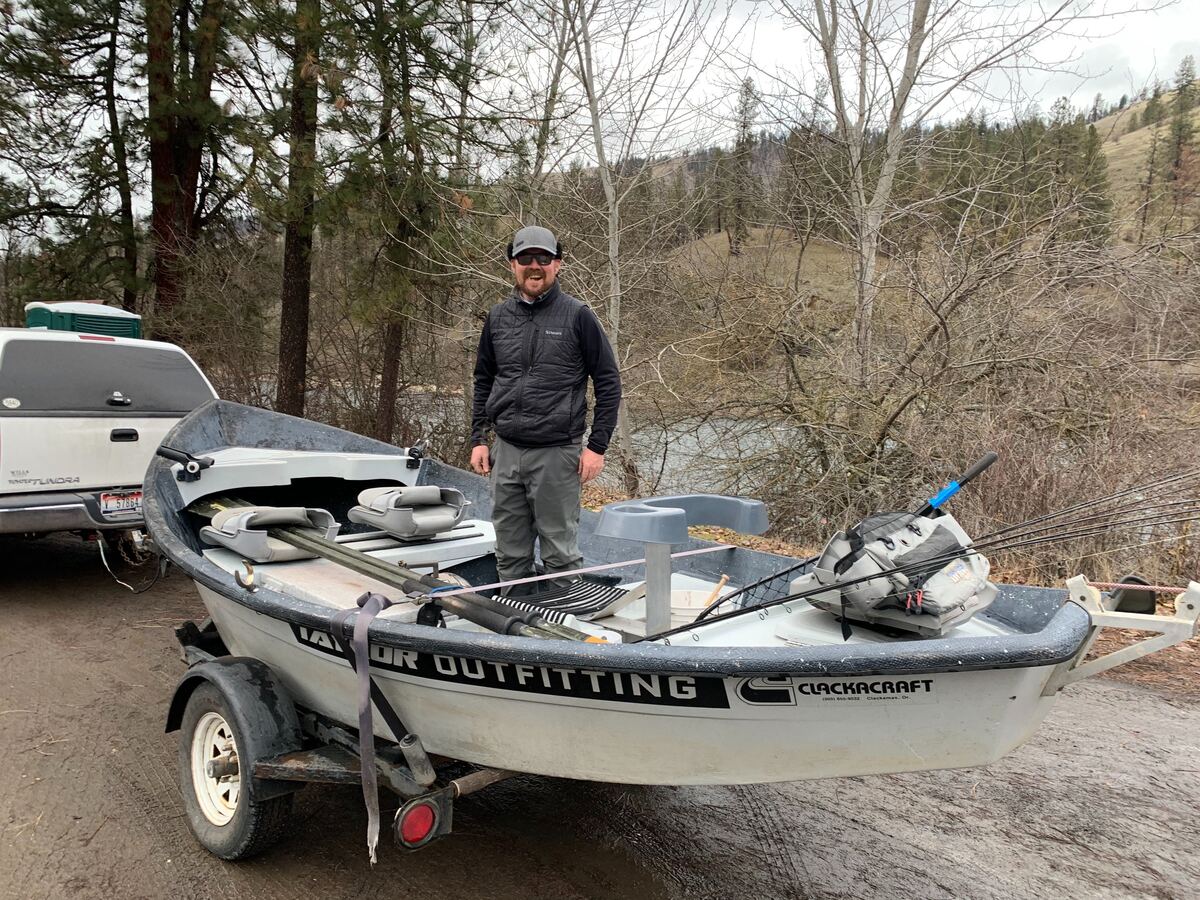 Jeremy Sabus has fished and guided on the some of the Northwest's most iconic trout streams for more than two decades.

That's about a 70-mile stretch of famed trout stream on U.S. Highway 12, which meanders through old growth fir and pine forests and steep grassy gorges following the old Lewis and Clark Trail. Hotel bookings in the area have cratered, restaurants are unusually quiet. A study by Clearwater County estimated the economic hit of the closure at around $8 million a month.

That's huge for this rural, sparsely populated area, home to small, struggling river towns that used to depend on timber and now lean heavily on fishing, hunting and boating dollars especially in winter. But folks here also rely on the relatively cheap power thanks to the dams, in particular four of them on the Lower Snake River that conservationists and Native American tribes want removed.

"The most amazing thing about these fish is how resilient they are," conservationist Lizzy McKeag says. "If we just give them half a chance they're going to take advantage of that."

McKeag, who lives in the farming hub of Grangeville, sees the recent fishing closure as a possible tipping point that breaks a 30-year legal stalemate. The fight has pitted people against one another in towns that depend on the salmon, cheap power and a water system that allows farmers to easily grow and export wheat.

"I think the beauty and struggle of the salmon and steelhead issue is that all of those economies are now interconnected, especially in these small towns," McKeag says.

And for the first time in years, interests long diametrically opposed to one another are at least getting together and talking. The governors of Idaho and Washington have convened task forces to find legislative fixes. And conservationists are appearing alongside farmers and energy industry officials at public meetings in the region. 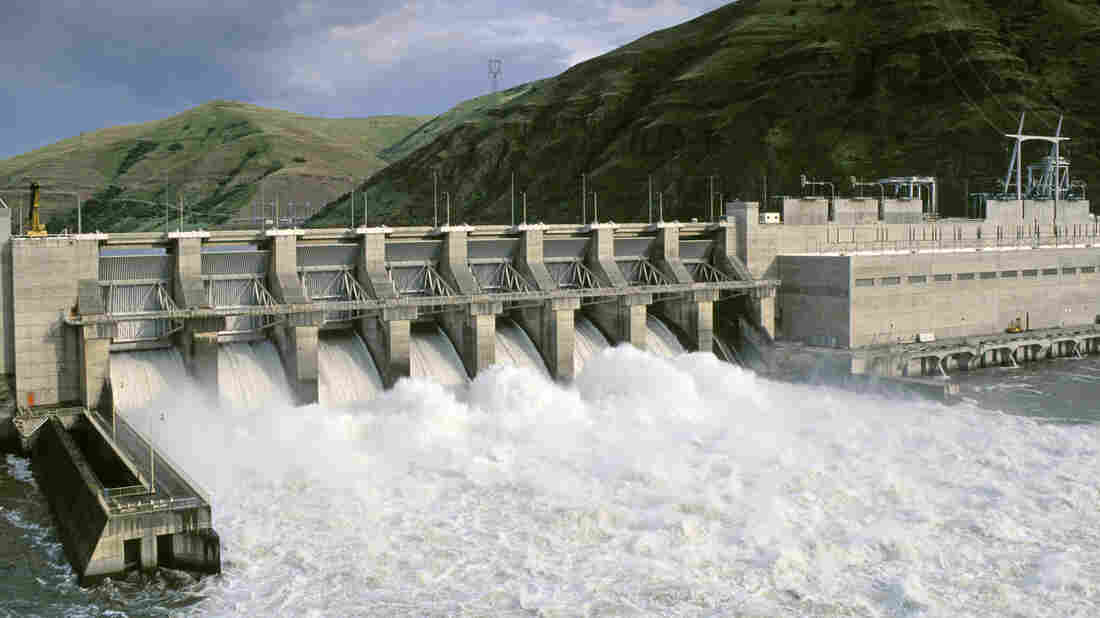 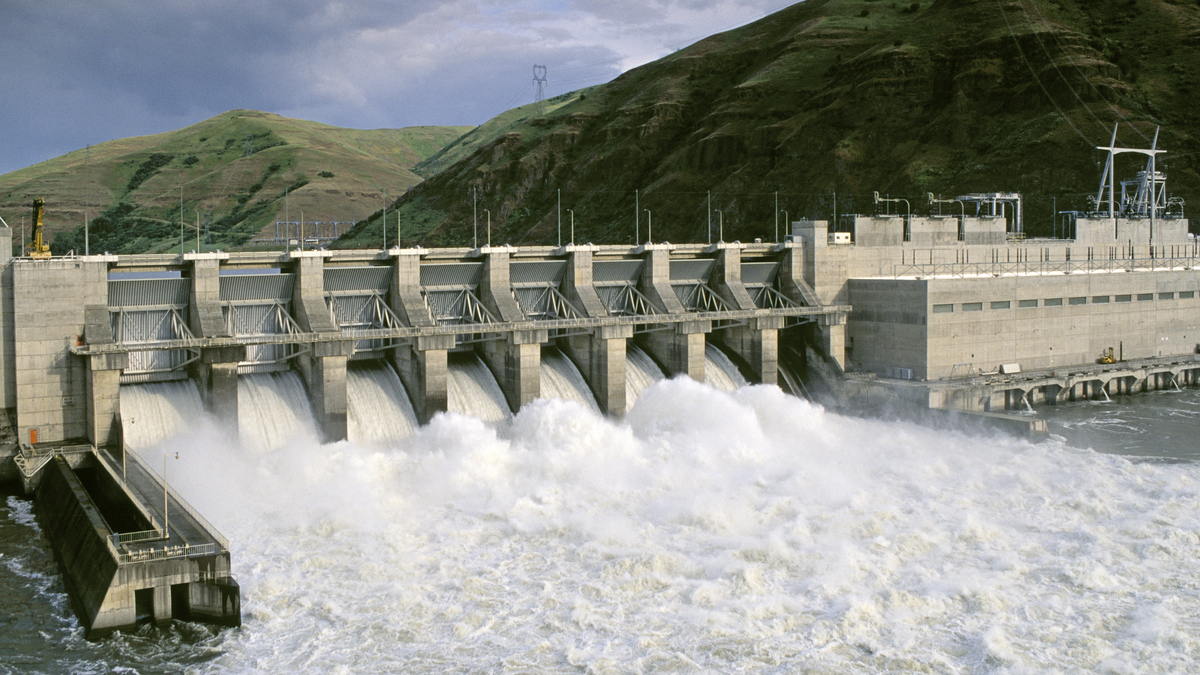 To aid salmon recovery, some people have proposed the Lower Granite Dam & hydroelectric plant on the Snake River be removed.

There's a sense that people are tired of the lawsuits.

"We consider ourselves salmon advocates," says Kieran Connolly, a vice president at the Bonneville Power Administration.

BPA is the federal agency that markets and sells hydropower from the dams. Connolly is not committing to removing the four dams in question on the Snake River (below the Clearwater in Washington state). But that question is at the heart of the latest court-ordered federal environmental review that's expected to be released in draft next month.

"We're really trying to listen to our critics and say, how can we get together around a table and incorporate your ideas to make things better for the fish," Connolly says. "That's what we're trying to do."

These 13 species of salmon and steelhead were first listed as threatened on the Endangered Species Act after a lawsuit from Native American tribes in the 1990s, and since then BPA and other agencies have spent hundreds of millions of dollars on mitigation.

The money goes to everything from fish ladders to get around the dams to habitat restoration to hatcheries. Today an estimated 80% of the fish on the system stem from hatcheries.

And yet the salmon continue to decline, from historical numbers of 18 million in the 1800s to barely 2 million today.

For tribes, this represents another broken promise with the U.S. government. McCoy Oatman, a tribal councilman for the Nez Perce, says his people depended on the fish for nutrition and survival before being forced onto a reservation that today only includes a stretch of the Clearwater River.

"We want to be healthy individuals like our ancestors," Oatman says. "When our bodies are not able to consume our natural foods that has an impact on us as a people."

Diseases such as diabetes are disproportionately high on the reservation. But he sees hope in the fact that some dams are being removed in other parts of the Northwest right now.

"You know, I'm hoping that in my daughters' lifetime, they'll be able to see a free flowing Snake River, much like we have on the Salmon River," Oatman says.

A free flowing Snake River, he says, would be a step toward restoring some ancestral fishing grounds for the of the tribe, not to mention the local economy that's come to depend heavily on the salmon and steelhead.