Accessibility links
Seattle-Area Voters To Become 1st With Full Option To Vote Via Smartphone King County, Wash., plans to allow all eligible voters to vote using their smartphones in a February election. It's the largest endeavor so far as online voting slowly expands across the U.S. 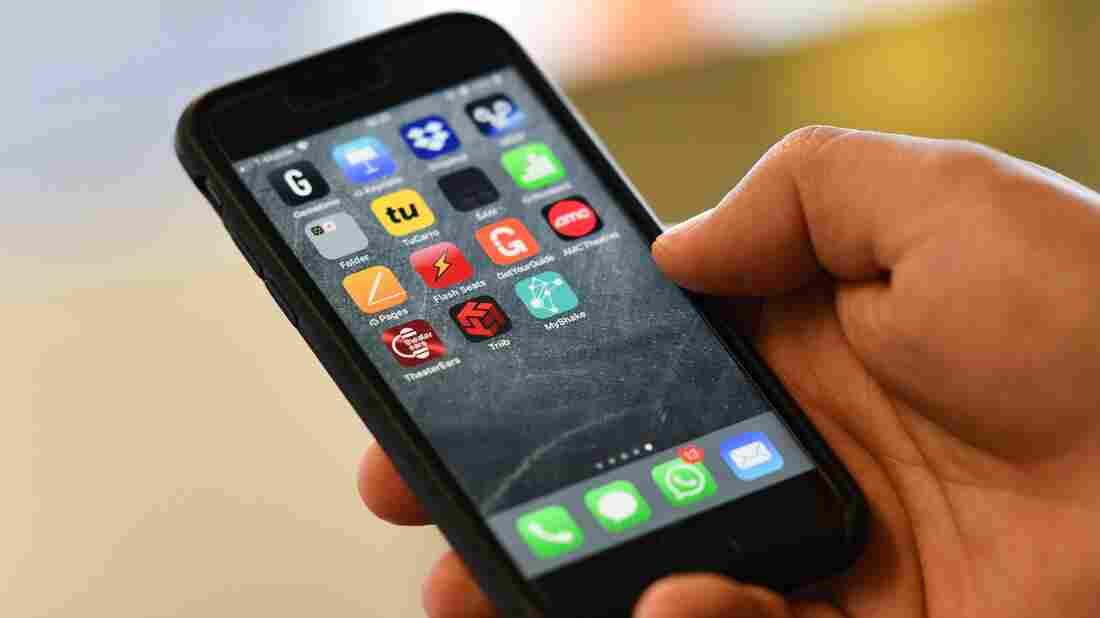 Voters in King County, Wash., will have the opportunity to vote on their smartphones in February. It will be the first election in U.S. history in which all eligible voters will be able to vote using their personal devices. Chris Delmas/AFP via Getty Images hide caption 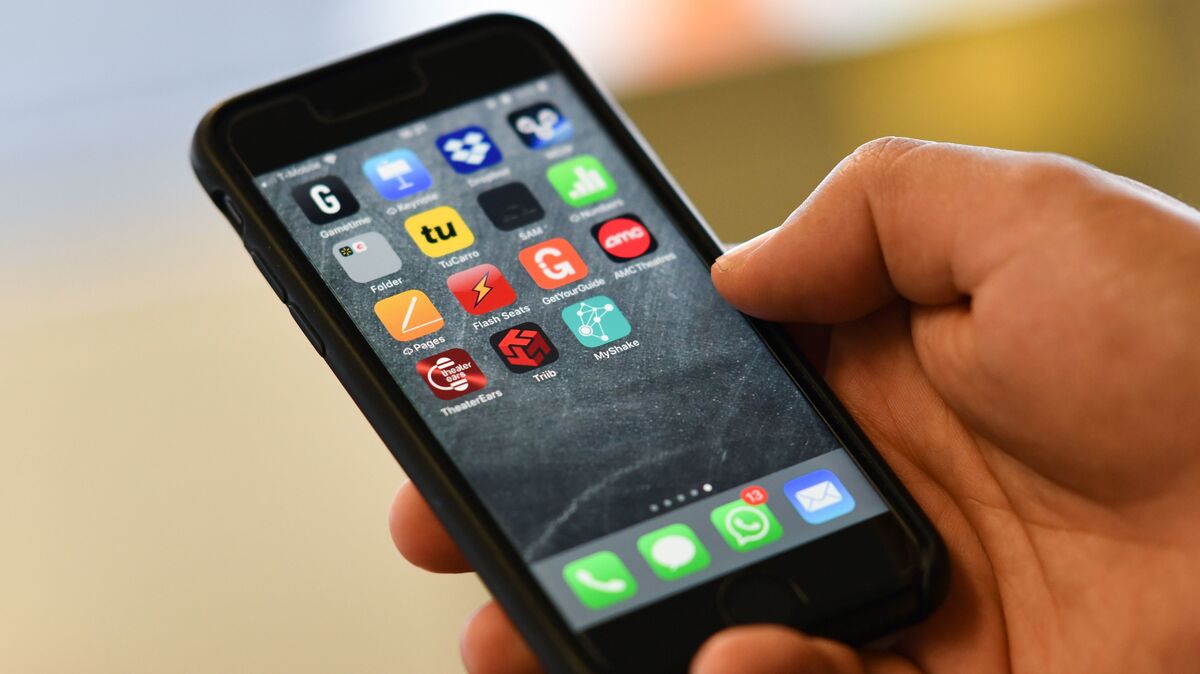 Voters in King County, Wash., will have the opportunity to vote on their smartphones in February. It will be the first election in U.S. history in which all eligible voters will be able to vote using their personal devices.

A district encompassing Greater Seattle is set to become the first in which every voter can cast a ballot using a smartphone — a historic moment for American democracy.

The King Conservation District, a state-chartered natural resources assistance agency with territory that includes Seattle and more than 30 other cities, is scheduled to detail the plan at a news conference on Wednesday. About 1.2 million eligible voters could take part.

NPR is first to report the story.

The new technology will be used for a board of supervisors election, and ballots will be accepted from Wednesday through election day on Feb. 11.

"This is the most fundamentally transformative reform you can do in democracy," said Bradley Tusk, the founder and CEO of Tusk Philanthropies, a nonprofit aimed at expanding mobile voting that is funding the King County pilot.

But the move is sure to polarize the elections community as democracy-watchers across the country debate the age-old push-and-pull between voting access and voting security.

The U.S. trails most developed democracies when it comes to its election turnout rate, and local races typically lag far behind presidential November elections.

The board of supervisors election in the King Conservation District, for example, in past years has drawn less than 1% of the eligible population to the ballot box.

"If you can use technology to exponentially increase turnout, then that will ultimately dictate how politicians behave on every issue," he said.

But just four years ago, Russia used cyberattacks to disrupt the presidential election, including targeting and hacking into election infrastructure.

There's no evidence that the attacks changed any votes or data, but intelligence officials, election experts and even former special counsel Robert Mueller have warned that adversaries would target elections again.

Because of that, security experts have been nearly unanimous in their opposition to mobile-voting expansions in recent years. Some say that technology has not advanced enough yet, while others say the Internet will never be safe or transparent enough for something as important as democracy.

Many outside specialists continue to agree.

"There is a firm consensus in the cybersecurity community that mobile voting on a smartphone is a really stupid idea," said Duncan Buell, a computer science professor at the University of South Carolina who specializes in election technology. "I don't know that I have run across cybersecurity experts whose mortgages are not paid by a mobile-voting company who think it's a good idea."

King County voters will be able to use their name and birthdate to log in to a Web portal through the Internet browser on their phones, says Bryan Finney, the CEO of Democracy Live, the Seattle-based voting company providing the technology.

Once voters have completed their ballots, they must verify their submissions and then submit a signature on the touch screen of their device.

Finney says election officials in Washington are adept at signature verification because the state votes entirely by mail. That will be the way people are caught if they log in to the system under false pretenses and try to vote as someone else.

The King County elections office plans to print out the ballots submitted electronically by voters whose signatures match and count the papers alongside the votes submitted through traditional routes.

While advocates say this creates an auditable paper trail, many security experts say that because the ballots cross the Internet before they are printed, any subsequent audits on them would be moot. If a cyberattack occurred, an audit could essentially require double-checking ballots that may already have been altered, says Buell.

"If you're doing phone voting or Internet voting, it's pretty much 'garbage in, garbage out.' You don't really know what you're getting in or what's coming out the other side," said Joseph Lorenzo Hall, the former chief technologist at the Center for Democracy and Technology, in an interview with NPR last year.

Voters who use the smartphone portal also have the option to not submit their ballots electronically. They can log in, fill out the ballot and then print it to either drop off at designated drop-off locations or put in the mail.

Glimpse of the future?

Voting online has had a bumpy history over the past decade.

In a widely publicized incident, Washington, D.C., saw an online voting pilot program get hacked in 2010. The project was scrapped.

And the Democratic National Committee decided to nix a plan this year that would have allowed voters to caucus remotely in Nevada and Iowa. Precinct and party officials in Iowa, however, do intend to use a smartphone app to report results from their level.

Other states and counties also have shown a willingness to experiment to chase better voting turnout.

Before the King County announcement on Wednesday, however, that experimentation had been limited to populations that tended to have more difficulty getting to the polls.

West Virginia used a mobile app in the 2018 midterm elections to allow military voters and voters living overseas to cast ballots. One county in Utah allows the same for disabled voters.

All the recent developments have one thing in common: They've been funded by Tusk Philanthropies. Bradley Tusk told NPR that he hopes to fund between 35 and 50 mobile-voting pilots over the coming five years and then campaign for even wider use based on the data compiled from those programs.

"Everyone who doesn't want this to happen is never going to say, 'We oppose mobile voting because we don't want higher turnout,' Tusk said. "They're going to say, 'It's not safe.' And if we have proven 30, 40, 50 times over that it is safe, it's a lot harder for those objections and arguments to fly."

Buell, the University of South Carolina computer science specialist, admits that mobile voting probably will continue to expand this decade. That is due in part, he says, to a miscalculation by advocates and the public about how insecure the Internet and mobile phones are.

"Until we have a total collapse of some election, I think this sort of thing is going to continue," Buell said. "People want to believe that they can do everything on their phones."

Clarification: This story has been updated to reflect that the King Conservation District is a natural resources assistance agency chartered by the state and not a state environmental agency, as an earlier version of the report described.