Accessibility links
Obituary: Terry Jones, Member Of Monty Python's Flying Circus Comedian, author and filmmaker Terry Jones has died at the age of 77 after suffering from dementia. As part of Monty Python, he was known for his drag characters and for co-writing the "Spam" sketch. 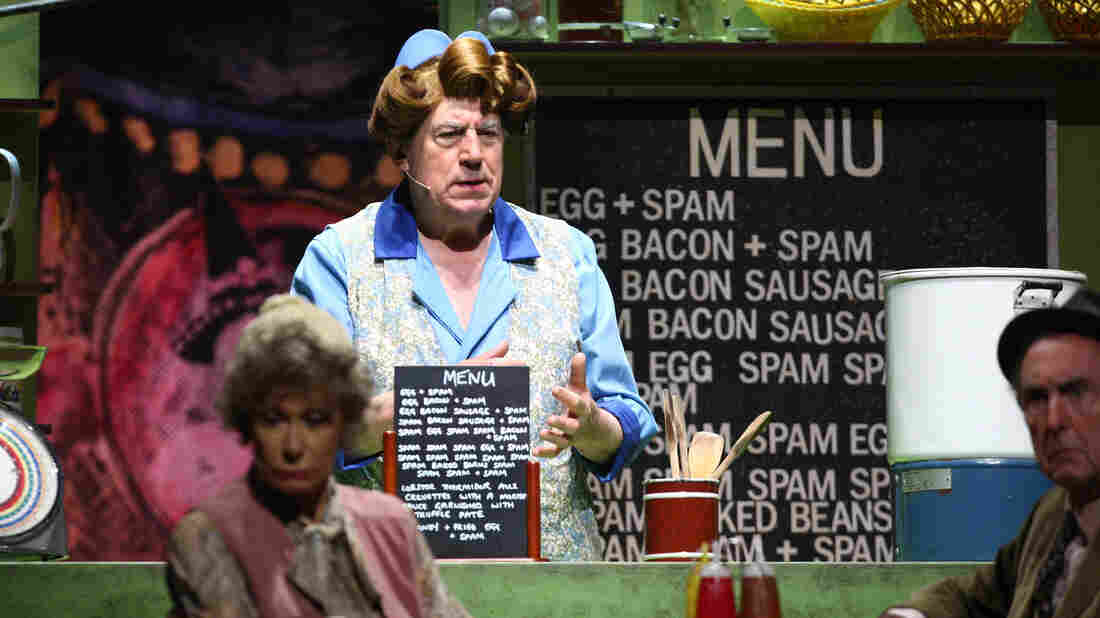 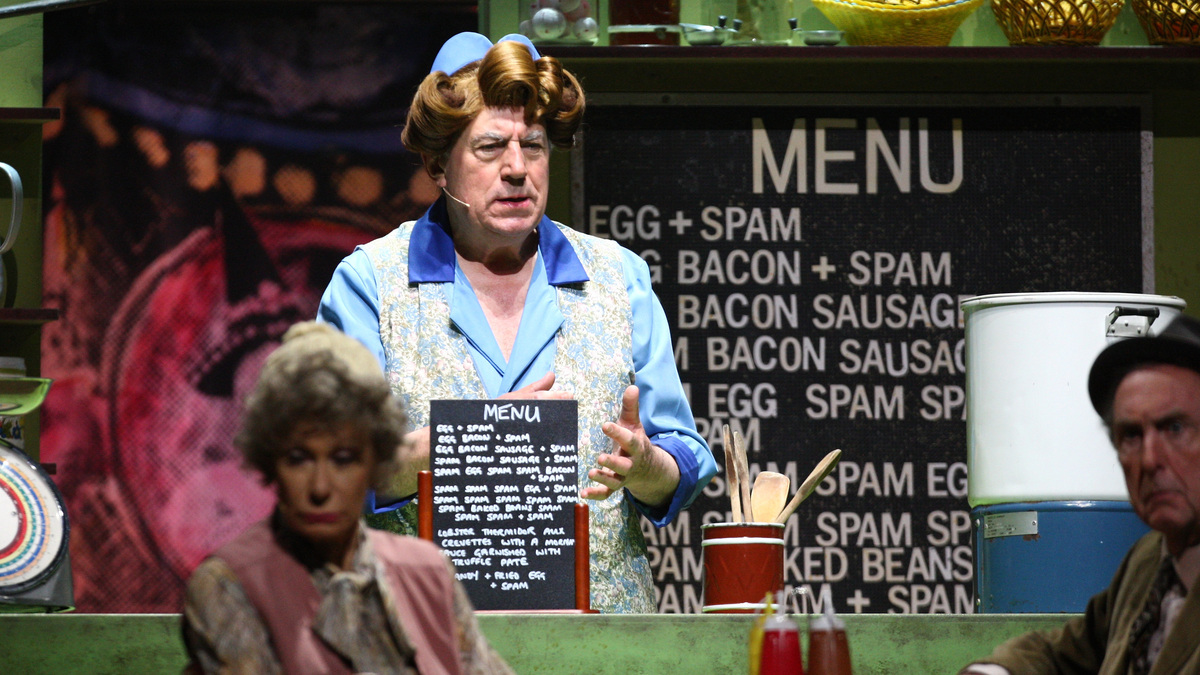 Goodbye to Mr. Creosote. Goodbye to the naked organist. Goodbye to Brian's mum, and to all her screeching sisters. Goodbye to Terry Jones, who has consumed his final wafer-thin mint.

It's hard to eulogize a Python — for one thing, no one can ever top John Cleese's magnificent sendoff of Graham Chapman in 1989. "Good riddance to him, the freeloading bastard, I hope he fries," Cleese told the assembled mourners. "And the reason I say this is that he would never forgive me if I didn't, if I threw away this glorious opportunity to shock you all on his behalf." If you're watching the YouTube video, the camera at that moment cuts to Jones smiling fondly in the crowd. (Commenting today on Twitter, Cleese said "Two down, four to go.")

And while I'd like to be rude about Terry Jones, circumstances compel me to point out that he was much more than just that naked guy on the organ bench. He was a writer — of Python scripts and children's books alike — a documentarian, a Chaucer scholar and a director. Anyone who's ever quoted Monty Python and the Holy Grail or Life of Brian (yes, I'm looking at you, you nerd) owes a debt to Jones, who directed Holy Grail alongside fellow Python Terry Gilliam, and went on to helm Life of Brian (and later The Meaning of Life) on his own.

Jones was born in Wales in 1942; his family moved to England when he was a little boy and he eventually ended up at Oxford, where he studied English — and most importantly for our purposes, where he met fellow student and future Python Michael Palin, with whom he wrote and performed comedy sketches. In 1969, they teamed up with Cleese and Chapman, along with Eric Idle and animator Terry Gilliam, to create the show that became known as Monty Python's Flying Circus (though it was almost called Owl Stretching Time).

Jones adopted drag on the show, playing a succession of middle-aged battle-axes stomping across the screen in support hose and headscarves. And when he wasn't in dresses, he might appear nude, seated at an organ as a superlatively silly bit of visual punctuation between sketches. (The BBC credits Jones with pushing the Pythons away from traditional punch lines and towards those surreal moments — the naked organist, or Chapman in full military kit, shutting down a sketch for being "too silly.") And of course, he co-wrote the famous "Spam" sketch, which gave us today's term for a flood of junk email.

Monty Python's disjointed stream-of-consciousness humor influenced a generation of comedians — in fact, the adjective "Monty Pythonesque" is now in the Oxford English Dictionary, a fact that rather distressed Jones. "The one thing we all agreed on, our chief aim, was to be totally unpredictable and never to repeat ourselves," he told The New York Times in 2009. "We wanted to be unquantifiable. That 'pythonesque' is now an adjective in the O.E.D. means we failed utterly."

Monty Python went off the air in 1974 but had a robust afterlife in movies and on the stage. Jones went on to make several movies of his own, including 1989's Erik the Viking, starring Tim Robbins and loosely based on one of the children's books he'd written. He also made documentaries that reflected his interest in ancient and medieval history, and published two books on Geoffrey Chaucer. In a 2011 interview with Wales Online, Jones said that was what he'd like to be remembered for: "Maybe a description of me as a writer of children's books or some of my academic stuff. Or maybe as the man who restored Richard II's reputation. He was a terrible victim of 14th century political spin, you know."

Jones was an antiwar campaigner as well, and a fierce opponent of war in Iraq; his essays about it were collected in a 2004 book called Terry Jones' War on the War on Terror.

In 2016, he announced he'd been diagnosed with primary progressive aphasia, a form of dementia that eventually robbed him of his ability to speak. Jones died yesterday at his home in Highgate, England. He was 77.

Goodbye, Terry Jones. You weren't the Messiah ... you were a very naughty boy. Now go away!