Accessibility links
Biden And Sanders Amp Up Criticism As Polls Show Edging Ahead In Democratic Race The two Democratic presidential candidates are increasing their scrutiny of each other's long records. 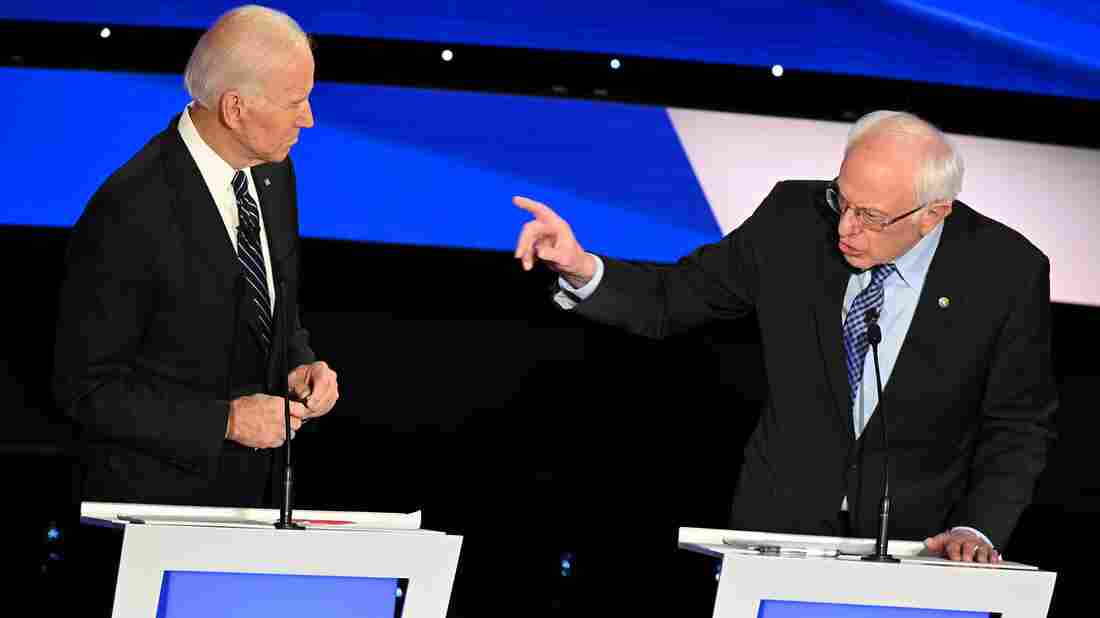 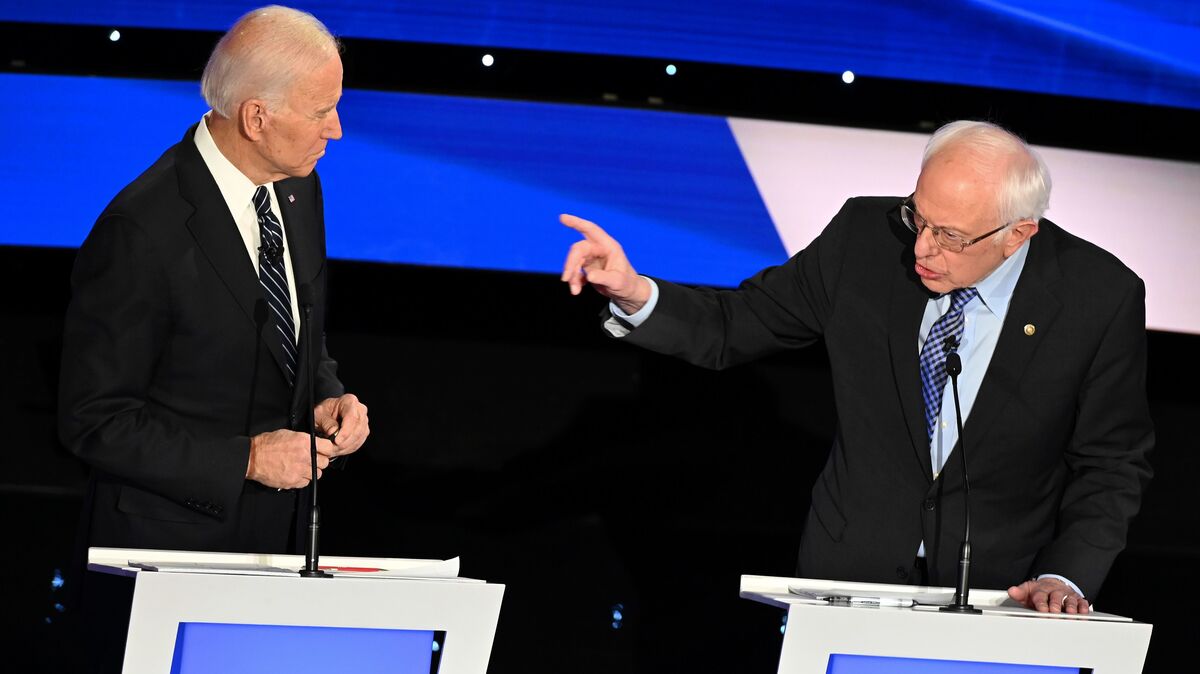 Former Vice President Joe Biden is defending his record on Social Security, amid increased criticism from the campaign of Vermont Sen. Bernie Sanders, which has repeatedly pointed to Biden's willingness as a U.S. senator to back spending freezes for Social Security and other entitlement programs.

The candidates' back-and-forth culminated — as most disputes in modern presidential campaigns do — in dueling Twitter posts Tuesday night.

"Let's be honest, Joe," Sanders' campaign account wrote. "One of us fought for decades to cut Social Security, and one of us didn't."

The tweet included a clip from a speech Biden delivered in the mid-1990s, saying, "When I argued that we should freeze federal spending, I meant Social Security as well. I meant Medicare and Medicaid. I meant veterans' benefits. I meant every single solitary thing in the government. And I not only tried it once — I tried it twice, I tried it a third time, and I tried it a fourth time."

Let’s be honest, Joe. One of us fought for decades to cut Social Security, and one of us didn’t. But don’t take it from me. Take it from you. pic.twitter.com/qh7qb1Hmcl

Biden, who served decades as a Delware senator, responded on his own account, writing: "I've been fighting to protect — and expand — Social Security for my whole career. Any suggestion otherwise is just flat-out wrong."

For years Biden expressed worries about the ever-increasing federal debt, and repeatedly signaled he'd look at so-called "entitlements" — Social Security, Medicare and Medicaid — along with other government spending in order to rein in the debt. But Biden reiterated in a Wednesday morning TV interview that as president he'd focus on raising new revenue, rather than any freezes or cuts, in order to address Social Security's long-term viability.

I've been fighting to protect — and expand — Social Security for my whole career. Any suggestion otherwise is just flat-out wrong. pic.twitter.com/KWIIJgFqGk

The intraparty feud comes less than two weeks before the Iowa caucuses, and as national polls out Wednesday show Biden and Sanders are solidifying their holds as the two strongest candidates in the Democratic presidential field.

A CNN survey finds Sanders and Biden 10 points ahead of their closest competitor, and a Monmouth University poll showed a similar gap. (Sanders leads in CNN's survey, while Biden is ahead in Monmouth's. The two are leading in the Iowa polling average as well.)

Sanders isn't the only one digging up positions and speeches from the 1990s.

Biden, like Hillary Clinton in 2016, is criticizing Sanders' earlier votes against gun control measures. Pulling out snippets from decades-old speeches on Social Security, Biden told MSNBC Wednesday, is "like my going back and pointing out how — how Bernie voted against the Brady Bill five times. ... Or how he voted to, you know, protect gun manufacturers. It's the only group in America you can't sue. I mean, he's made up for that. He's indicated that was past."

Sanders did repeatedly vote against the Brady Bill, which when passed implemented background checks and other measures, but also voted for a federal assault weapons ban, and many other gun control measures.

"Way back in 1988, before it was fashionable, I ran for the United States Congress in Vermont, and I probably lost that election because I believed then that assault weapons should be banned," Sanders told the NPR Politics Podcast this summer.

That the criticisms — a couple videos posted to social media accounts, and a handful of statements from campaign staffers and the candidates — count as a significant escalation is itself a sign of how relatively tame and friendly the 2020 Democratic primary has been so far. These barbs aren't coming via paid TV ads. And Biden and Sanders have stood near each other at six debates but have largely refrained from any direct confrontations, other than Sanders' repeated criticisms of Biden's vote to authorize the 2003 Iraq war. Despite hints from Sanders' campaign that he'd attack Biden over Social Security at the most recent debate, the confrontation never happened. 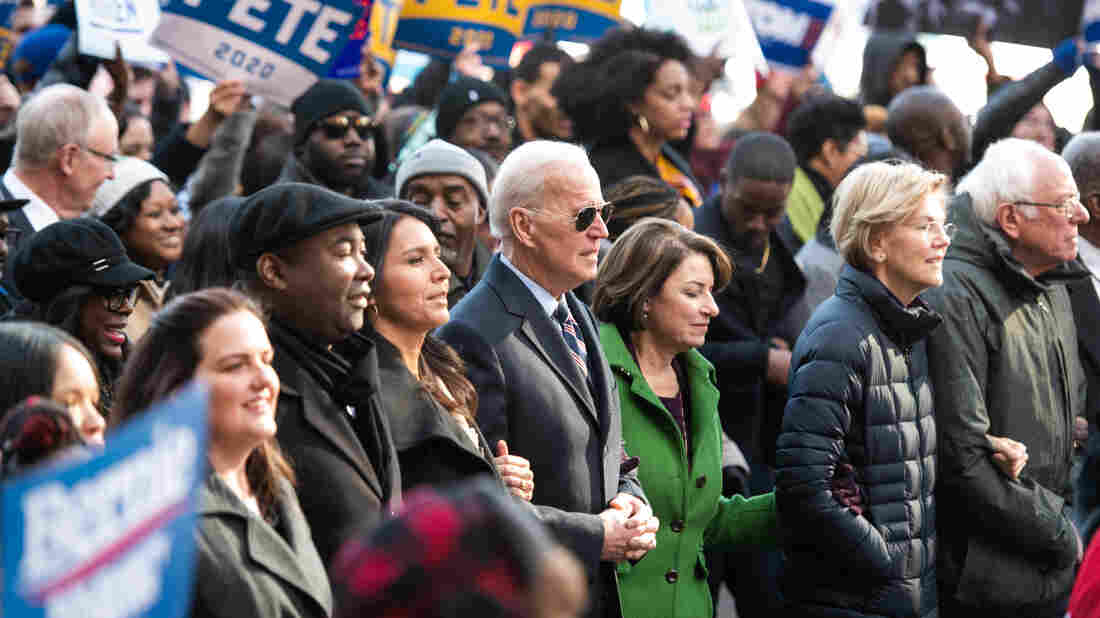 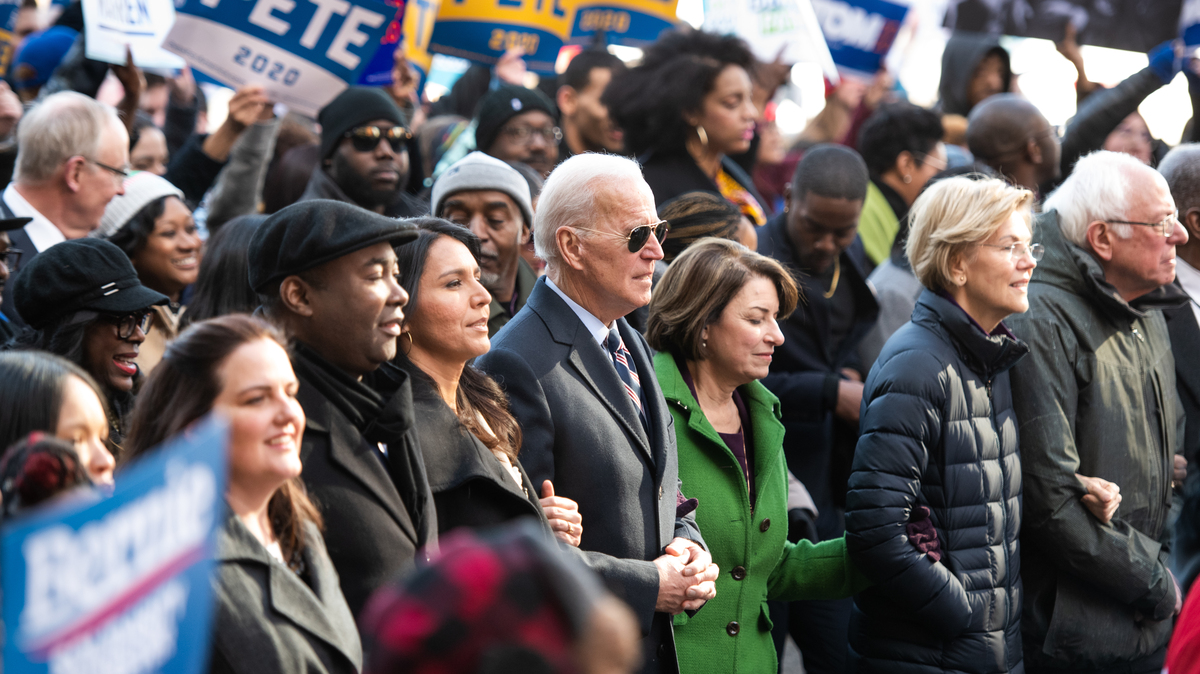 The Democratic field has vowed to unite once a nominee is named, and do everything they collectively can to defeat President Trump. On Monday, Sanders, Biden, Massachusetts Sen. Elizabeth Warren and other candidates all walked arm-in-arm at a South Carolina march honoring Martin Luther King Jr.

Still, the debate over Social Security will likely amplify over the next week-and-a-half, as Biden and Sanders each campaign in the final stretch before the Feb. 3 Iowa caucuses.

Sanders' line of criticism isn't new. When Sanders shot to national prominence in 2010 with an eight-hour speech criticizing a tax compromise orchestrated by Biden, Sanders warned that a portion of the agreement — a temporary cut in Social Security payroll taxes — could lay the groundwork for eventual cuts to the program.

"This is a very dangerous step forward for those of us who believe in Social Security," he said at the time.

Sanders has long made iron-clad commitments to increasing, rather than freezing or cutting, entitlements like Social Security, Medicare and Medicaid a key part of his political brand.

Biden, like many other Democratic politicians, has long warned about the long-term health of Social Security.

But speaking to MSNBC Wednesday, he reiterated that he views the solution as increasing the money going into the program, rather than cutting or freezing the benefits.

"If everyone above $400,000 pays the same amount, or the same percentage in income as you do when you're making $100,000, we're solving — my grandkids are set. I'm able to increase Social Security payments for the two groups I mentioned," Biden told Morning Joe.