Accessibility links
Senators Not Jurors, Chief Justice Ruled In Clinton Impeachment Trial An objection to being referred to as a juror made by a senator in the Clinton impeachment trial was upheld by the presiding chief justice. That ruling now seems forgotten by many.

When Senators Try A President, Are They Jurors? Apparently Not

When Senators Try A President, Are They Jurors? Apparently Not 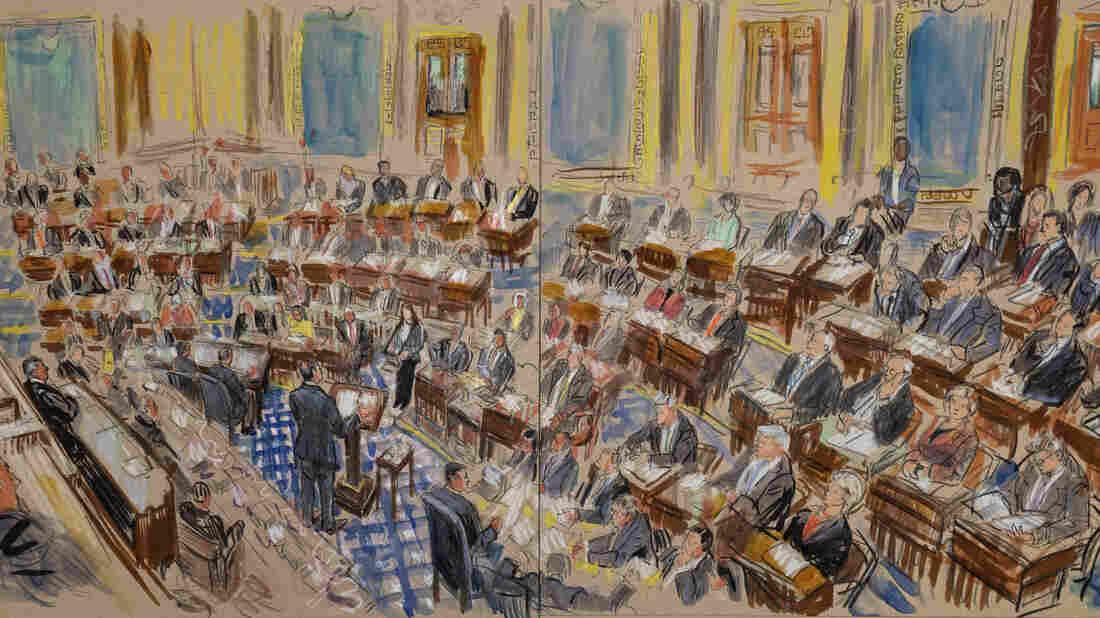 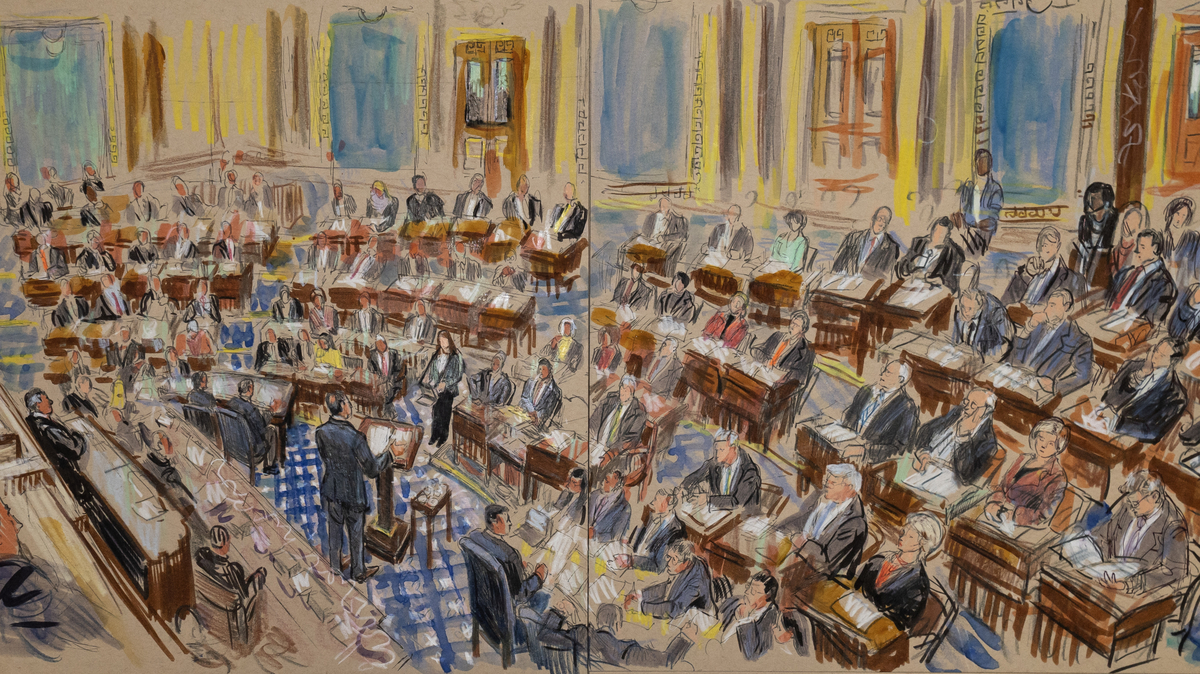 This artist sketch depicts the Trump impeachment trial on Tuesday.

It was Day Two of the House managers' opening arguments in another Senate impeachment trial 21 years ago. Bob Barr, a Georgia House Republican,
was speaking in the well of the Senate, making a case for removing President Bill Clinton from office.

"We urge you, the distinguished jurors in this case," Barr said to the assembled senators, "not to be fooled."

That prompted Sen. Tom Harkin, a progressive Democrat from Iowa, to leap to his feet and lodge the first objection made in the Clinton trial.

"Mr. Chief Justice," Harkin said to the presiding officer, Supreme Court Chief Justice William Rehnquist, "I object to the use and the continued use of the word 'jurors' when referring to the Senate sitting as triers [in] a trial on the impeachment of the president of the United States."

Harkin knew that Rehnquist, a political conservative, was a scholar of previous impeachment trials; what's more, the now-retired senator tells NPR he read the book the chief justice had recently written on the subject.

Among the several reasons Harkin cited for objecting to being called a juror was what the U.S. Constitution had to say about trials of impeached officials.

Harkin also pointed to Alexander Hamilton's contention in Federalist Paper No. 65 that "there will be no jury to stand between the judges who are to pronounce the sentence of the law and the party who is to receive and suffer it."

And not once in the Senate's 26 rules governing impeachment, Harkin added, are the words "jury" or "juror" mentioned.

Why does it matter if senators in an impeachment trial are referred to as 'jurors'? Harkin conceded that it may appear to be a small point, but he argued that senators in such a trial have powers and attributes that no regular juror would ever have, and that it's important for future generations to understand the difference.

With regular jurors, Harkin noted in 1999, courts prefer those who know little or nothing about the case being tried and who do not already know fellow jurors. That's not the case with senators trying an impeached president.

Rehnquist was clearly sympathetic to the point Harkin was trying to make.

"The chair is of the view that the senator from Iowa's objection is well taken," the chief justice declared. "The Senate is not simply a jury — it is a court in this case, and therefore counsel should refrain from referring to senators as jurors."

Rehnquist's 1999 ruling would appear to have settled the matter of referring senators as 'jurors.'

"We'll be sitting, as you know, George, as kind of like jurors," Sen. Richard Shelby, R-Ala., told ABC's George Stephanopoulos on Sunday.

Shelby was one of those sitting in judgment as well at the Clinton impeachment trial. So was Senate minority leader Chuck Schumer, D-N.Y., who told reporters last week, "We've all been sworn in by the chief justice of the United States to serve as judges and jurors."

Reached by NPR at his winter home in the Bahamas, the erstwhile senator from Iowa said he would not be letting such characterizations stand in the chamber that he retired from five years ago.

"I can tell you," Harkin said by telephone, "if I were there and they started referring to us as jurors, I certainly would rise to object."

The late chief justice Rehnquist, he added, made it clear that the Senate is not a jury.

"He referred to the Senate sitting in impeachment as a court. Who sits in a court? That's the judge," Harkin said one day after publishing a Washington Post op-ed pleading for his former Senate colleagues to stop referring to themselves as 'jurors.' "So it's really there are 100 judges sitting there, not 100 jurors."

One expert on American impeachment proceedings says Harkin's term 'judges' fails too as an apt description for senators sitting in judgment.

"If I was making an argument, I'd refer to them as senators," says Jeffrey Engel, director of the Center for Presidential History at Southern Methodist University and co-author of "Impeachment: An American History."

"First of all, I think that's safest, but also most accurate because they are not jurors and they are not judges," Engel adds. "A judge, of course, has to follow different rules set up by the federal rules of procedure. Whereas this court, the Senate court, can do whatever the heck it wants."