Accessibility links
Trump Impeachment Trial Recap: Opening Arguments; Senators Break Into The Milk Rep. Adam Schiff, D-Calif., cast the implications of the impeachment trial into historic terms for the power of Congress and the standing of the United States on the world stage. 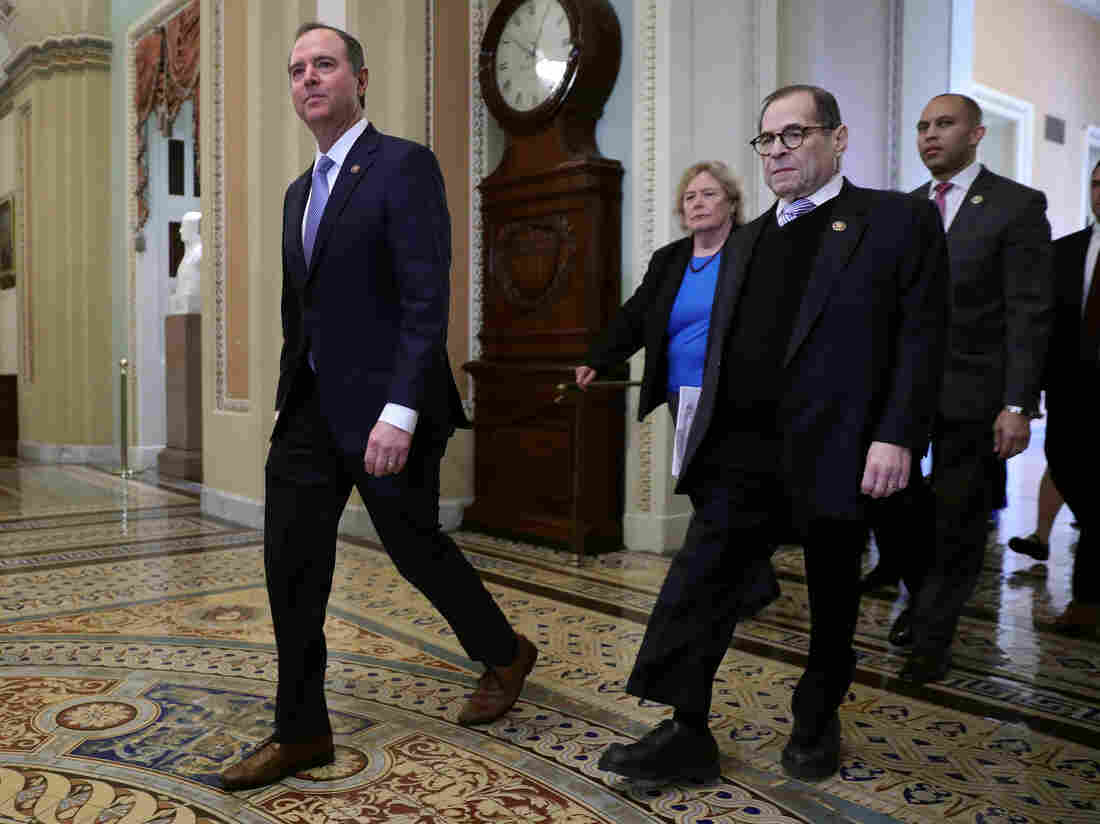 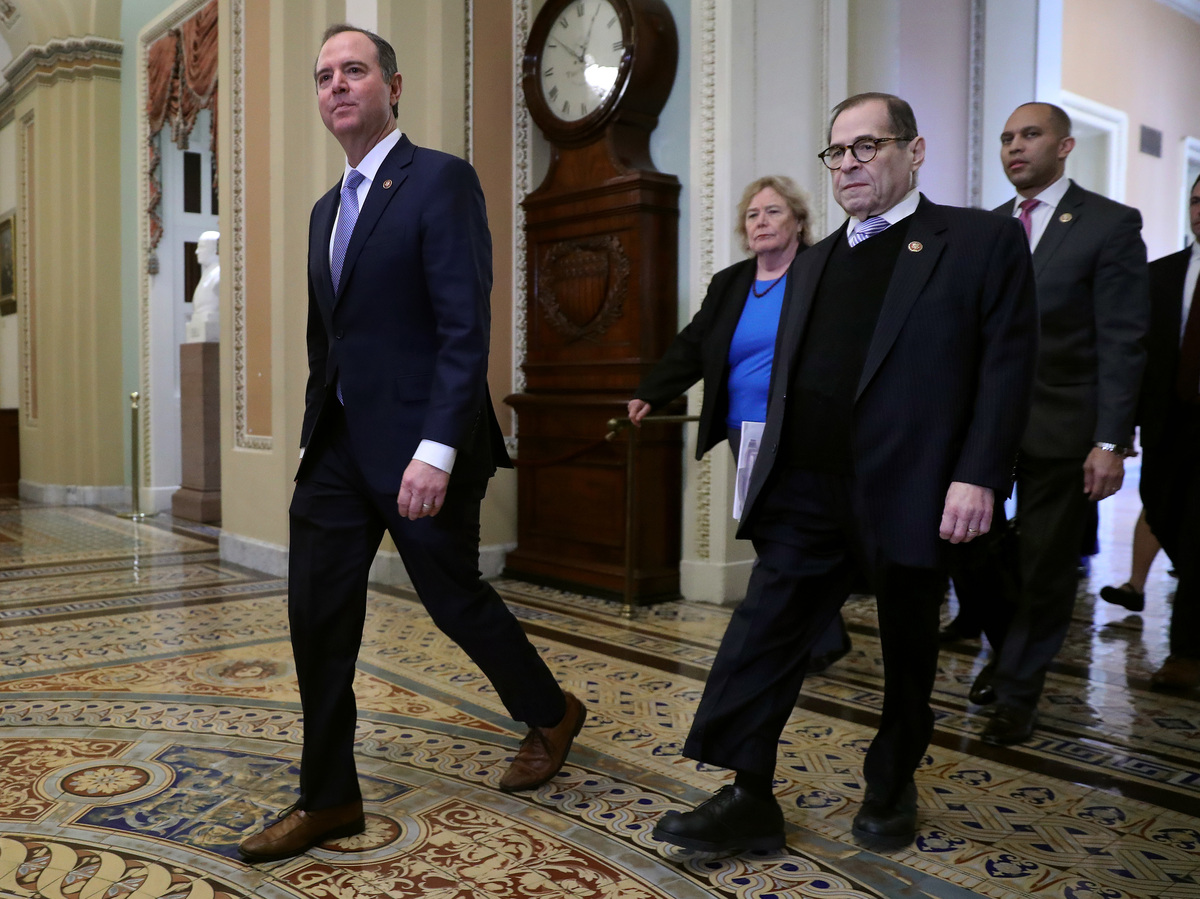 The matter before the Senate isn't just President Trump's conduct; it is no less than the fate of the Constitution and America's role in the world, House managers said on Wednesday.

With the ground rules having been settled in the early hours after sometimes-bitter litigation between the House delegation and Trump's legal team, senators returned Wednesday afternoon to hear the formal opening of the case.

Democrats are going first with 24 hours over three days to present their arguments for removing Trump from office.

Rep. Adam Schiff, D-Calif., outlined the now-familiar Ukraine affair, in which the president is accused of holding up military aid in an attempt to get a political rival investigated. He returned to his earlier themes about the need for new witnesses and evidence — and exhorted senators in sometimes apocalyptic terms about the magnitude of this moment for the life of the Republic.

"If we don't stand up to this peril today, we will write the history of our decline with our hand," he said. "We have for generations been the shining city upon a hill that President Reagan described. America is not just a country but also an idea. But what worth is that idea if, when tried, we do not affirm the values that underpin it?"

Senators must bear in mind that in the Trump case, impeachment itself is on trial, Schiff said.

Article 2 of the impeachment addresses what Democrats call Trump's obstruction of Congress. Schiff said if Trump is permitted to keep his office — even after barring witnesses from talking to Congress and withholding documents — the Senate will have given away its power to hold presidents accountable.

"There's no guarantee that this democracy that has served us so well will continue to prosper," he said.

Trump's attorneys will have time later in the trial to offer a rebuttal. In the meanwhile, lawyer Jay Sekulow repeated some of the White House's complaints about Schiff and Democrats to reporters during breaks in the trial.

At the beginning of hours' worth of presentations, Schiff also warned that an acquittal would serve as a signal to nations abroad, too. Authoritarian regimes such as Russia would take comfort in the accumulation of power in the presidency and its concomitant loss by Congress, he said.

Then there are the more immediate geopolitics.

The strategy pursued by the United States to help Ukraine against Russia and Russian-backed forces is the correct one, Schiff said, and Trump's freeze last year cast that into doubt. Further doubt about American commitments will result if Trump keeps his office, he argued.

"This isn't charity. It's about our defense as much as Ukraine," he said.

If the Senate doesn't remove Trump for having imperiled that commitment, Schiff said, Moscow would reap a geopolitical victory in Europe through the loss of faith in American support for its allies.

No thaw over witnesses or evidence

Minority Leader Chuck Schumer, D-N.Y., told reporters during a break that he thought Schiff's remarks were a "tour de force" and that he hoped the congressman's eloquence would break the logjam with Republicans over admitting new witnesses and evidence into the Senate trial.

Schiff and his compatriots did allude to evidence about the Ukraine affair that has surfaced since the House voted to impeach Trump last month, including a trove of material connected to an aide of Trump's lawyer Rudy Giuliani.

But there was no sign that Tuesday's marathon series of motions by Schumer to admit witnesses and evidence, as Democrats wish, had made any dent in the resolve of Majority Leader Mitch McConnell, R-Ky., or the majority.

McConnell has given ground slightly on admitting the House's evidentiary record and has held open the possibility of allowing witnesses and documents later on. But it seemed unlikely that any Republicans had been further swayed by the presentation on Wednesday.

"I didn't hear anything new, at all," said Sen. John Barrasso, R-Wy. "This was an effort ... in a partisan way, to bring a case against President Trump because they weren't happy with the results of the 2016 election."

South Carolina Sen. Tim Scott, another Republican, told reporters he blamed the impeachment on a political gambit by Democrats not to try to remove Trump but to put Republican senators in potentially competitive states such as Colorado and Maine, in a jam.

"What we've seen is just a rehashing of yesterday's charges," Scott said. "The goal of this entire process is ... to create an opportunity for them to try to overtake the Senate."

For now, as the hours unreeled on Wednesday and the main action of the trial got underway, it began to feel like the old-fashioned editions of Sports Center — similar stories told and retold, often with the same highlights, in slightly different ways over a day or night's worth of programming.

Schiff and his colleagues — Reps. Jerry Nadler, Jason Crow, Sylvia Garcia, Val Demings, Hakeem Jeffries and Zoe Lofgren — each elaborated in ways of their own on the basic themes of the Ukraine affair.

Demings alluded once more to her tenure as the chief of police in Orlando. Crow told senators about taking fire in Afghanistan when he was deployed there with a special operations unit — and about the importance of the counterbattery radars that alerted the American troops about incoming artillery.

Congress also furnished those kinds of systems to Ukraine, Crow said, and so he could appreciate how much the Ukrainians might have been upset when they worried about the hold in assistance last year.

"This is not a theoretical exercise ... and the Ukrainians know it," Crow said.

Before adjourning just before 10 p.m., the Democrats often quoted from the same documents and referred to the same TV clips, including of Trump at the White House or in interviews. Anecdotes from the House investigation were repeated more than once by different presenters.

The Senate, all the while, continued to settle in for the unusual tableau of a chamber in which all members are present, seated at their desks — and silent. A protester interrupted the proceedings not long after 6 p.m. as Jeffries was speaking but was ejected by Capitol Police.

Some senators appeared to take intense notes. At least one — Kentucky Republican Rand Paul — appeared to at least one observer to be solving a crossword puzzle.

Scenes from the Senate floor:
Sen Mike Lee was fiercely taking notes through Schiff's remarks, at one point having to stop to massage the palm of his writing hand

Sen Rand Paul, extremely focused as well.. but on a crossword puzzle, hidden not so discretely between his papers

Other senators coped with the hour upon hour of presentations by invoking one of the few privileges that remain available to them under the rules in force for the trial: a glass of milk. Only milk and water are permitted.

Sen. Richard Burr, R-N.C., was observed drinking a glass of milk, as was Arkansas Republican Sen. Tom Cotton, who cracked wise about it on Twitter during a break — senators may not use their phones during the trial — but they may get treats from the Senate's "candy desk," as Cotton evidently did.

It’s true, I had some milk with my chocolate.

I guess I could’ve added vodka & had a White Russian (minus the Kahlua). But @RepAdamSchiff probably would’ve accused me of collusion. https://t.co/JY4ca2oMUe

Another big change in the tenor of the Senate was represented in Burr's ankles — which were not visible.

Burr, who typically does not wear socks irrespective of the weather on Capitol Hill, chose instead to wear them for the session on Wednesday.