Accessibility links
Why Senators Can Drink Milk During An Impeachment Trial Strict Senate rules allow the following on the chamber floor during the impeachment trial: water, candy and ... milk. The presence of milk during the trial has become a hot topic on social media. 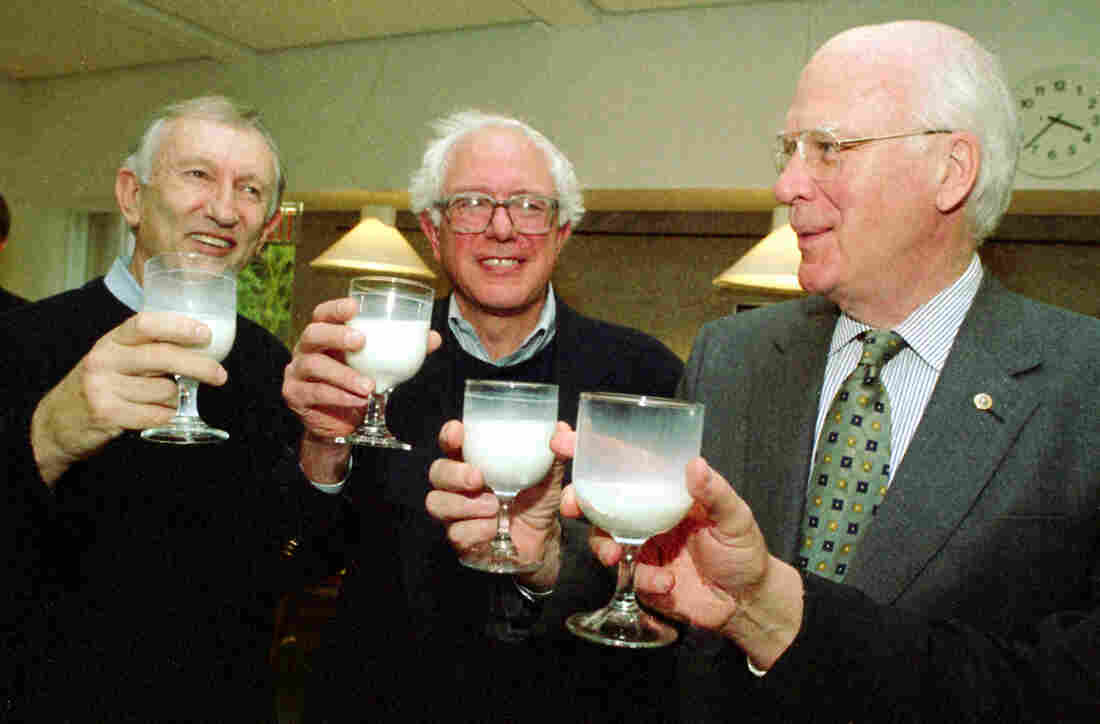 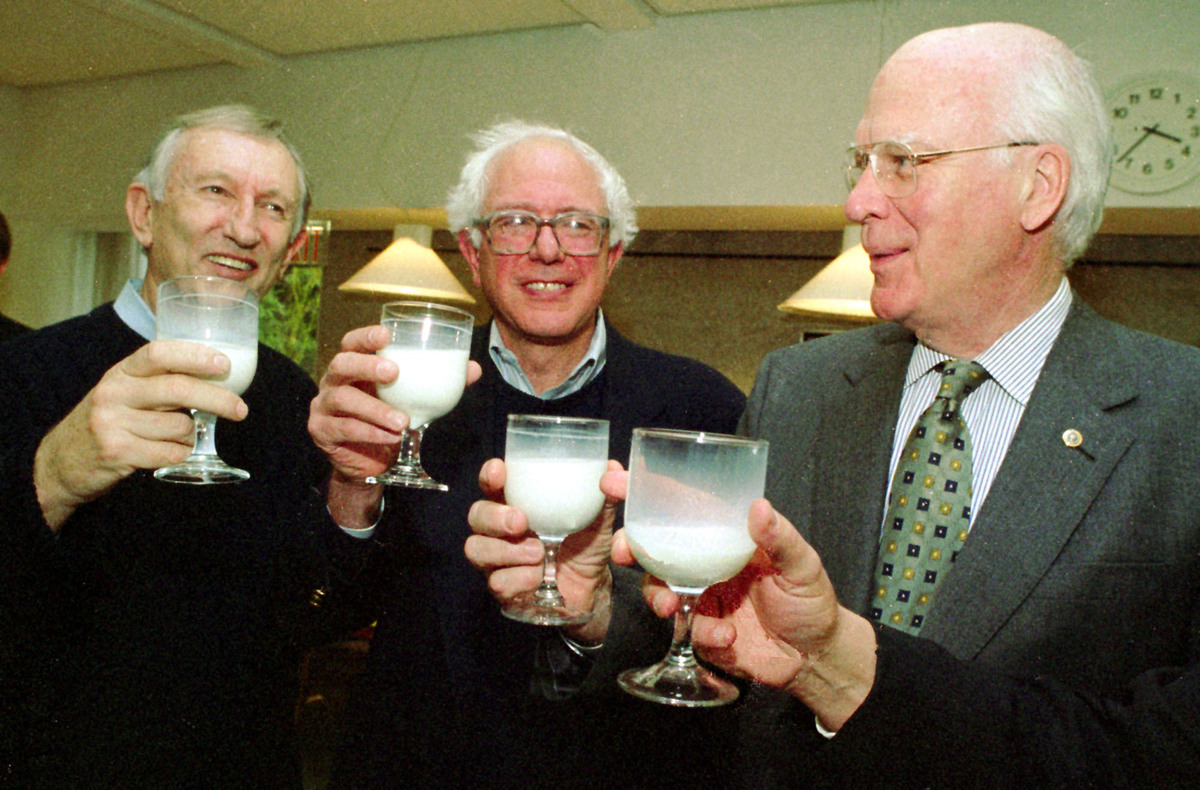 Then-Sen. James Jeffords, R-Vt.; then-Rep. Bernie Sanders, I-Vt.; and Sen. Patrick Leahy, D-Vt., drink glasses of milk in 1999. Senate rules during the impeachment trial of President Trump permit the consumption of milk on the chamber floor, a strange rule that has sparked a conversation on social media.

And so, for a moment, he put aside debate on labor law and asked the presiding officer of the chamber a question, his signature brawny bass voice amplifying its importance: Could he have a Senate page fetch him a generous helping of milk?

"Is it in violation of the Senate rules if the senator for Illinois asks one of the page boys to go to the restaurant and bring him a glass of milk?" Dirksen asked.

"There is nothing in the rules to prohibit the Senator from requesting a glass of milk," replied the presiding officer.

A relieved Dirksen was appreciative, as "water becomes pretty thin after a period of time. My lunch today will be a tall glass of milk," Dirksen said.

Thus enshrined the Senate rule: "Milk while speaking," permitting the imbibing of the white stuff on the Senate floor.

As Democrats and Republicans bitterly fought over the rules that would govern the impeachment trial of President Trump, word escaped that just two beverages would be allowed during the marathon chamber sessions: water and milk.

The nourishing revelation harked back to Dirksen's historical milk moment, but also sent reporters' social media accounts abuzz with eyewitness accounts of U.S. senators digesting gulps of milk while considering the merit of high crimes and misdemeanors against the president of the United States.

Page 758 of Riddick’s Senate Procedure does in fact say Senators can have a little milk, as a treat https://t.co/pVnXSkDxO4 pic.twitter.com/EX1iFYWZJt

The first sighting came when Tom Cotton of Arkansas was spied drinking a glass of milk. Then he was seen consuming a second glass of milk. As speculation over the contents of his glass poured on, Cotton himself confirmed the reports, using the sudden milk spotlight to take a jab at lead impeachment manager Rep. Adam Schiff, D-Calif.

"It's true, I had some milk with my chocolate," Cotton tweeted. "I guess I could've added vodka & had a White Russian (minus the Kahlua). But @RepAdamSchiff probably would've accused me of collusion."

I spent a little more than an hour inside the Senate chamber and when I check my phone, I'm greeted with requests from editors seeking to confirm if @SenTomCotton was given a glass of #MILK during #ImpeachmentTrial

Senatorial milk is not a freebie. Apparently, if senators want to indulge, they must provide it themselves. The Senate cloakroom provides only one beverage allowed on the Senate floor: water.

"In today's Senate, the Democratic and Republican cloakrooms provide water to senators when requested, and senators can choose between still or sparkling water," Senate Assistant Historian Daniel Holt told NPR.

Another idiosyncratic Senate custom that the impeachment trial has brought back into the public's consciousness is the designated candy drawer.

"It's actually a very important part of keeping senators awake during these long hours of testimony. Having a little energy boost as you're sitting there at the desk is sometimes a good thing," Santorum said.

While a spokeswoman for Cotton confirmed to NPR that the senator's milk chugs were a smooth and refreshing way to wash down the candy drawer's plentiful chocolate treats, any milk drinking spectacles during Trump's impeachment trial may never reach dramatic heights achieved by Wisconsin Sen. Robert La Follette in 1908.

Around 1 a.m., La Follette knocked back a glass of eggnog, which tasted off to him, so he set it aside.

Iron-willed, if a bit perturbed by the foul taste, La Follette pushed through an 18 hour and 23 minute filibuster, a single-speech duration record that took half a century to topple.

When La Follette's eggnog was examined by investigators, it was revealed that the mysterious mixture contained enough toxic bacteria to be lethal.

"Who had a motive to poison the senator? Perhaps the kitchen staff — or, at least half the Senate," jokes the U.S. Senate's Historical Office, noting that the chamber's interior could reach temperatures around 90 degrees back then.

"Most likely, however, the culprit was the searing heat that, until the 1950s, usually guaranteed senators the summer away from Washington."

The deadly souring of milk should be averted by the cloakroom refrigerator, which, Cruz's chief of staff confirms, keeps impeachment milk nice and cool.

A caption with a previous version of this story incorrectly identified Sen. Jim Jeffords as an independent in 1999. At the time, he was a Republican. In 2001, he left the party to become an independent.