Accessibility links
Democrats Finish 2nd Day Of Opening Arguments in Trump Impeachment Trial On Thursday, House Democrats outlined how the law applies to what they see as the president's "corrupt scheme" with Ukraine to tilt the 2020 election in his favor. 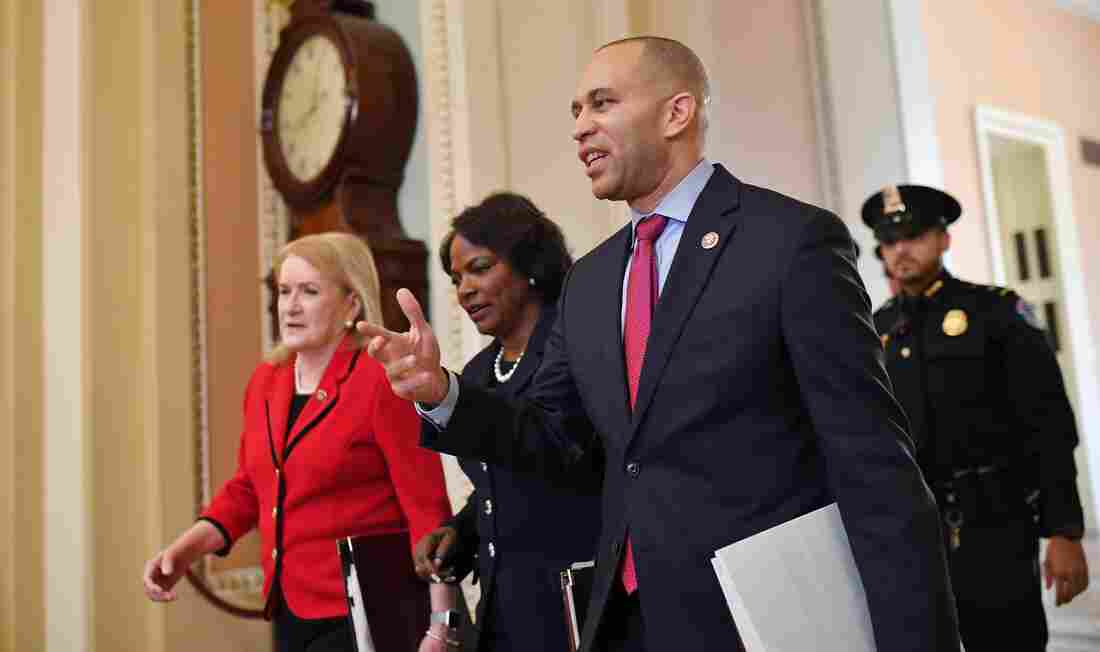 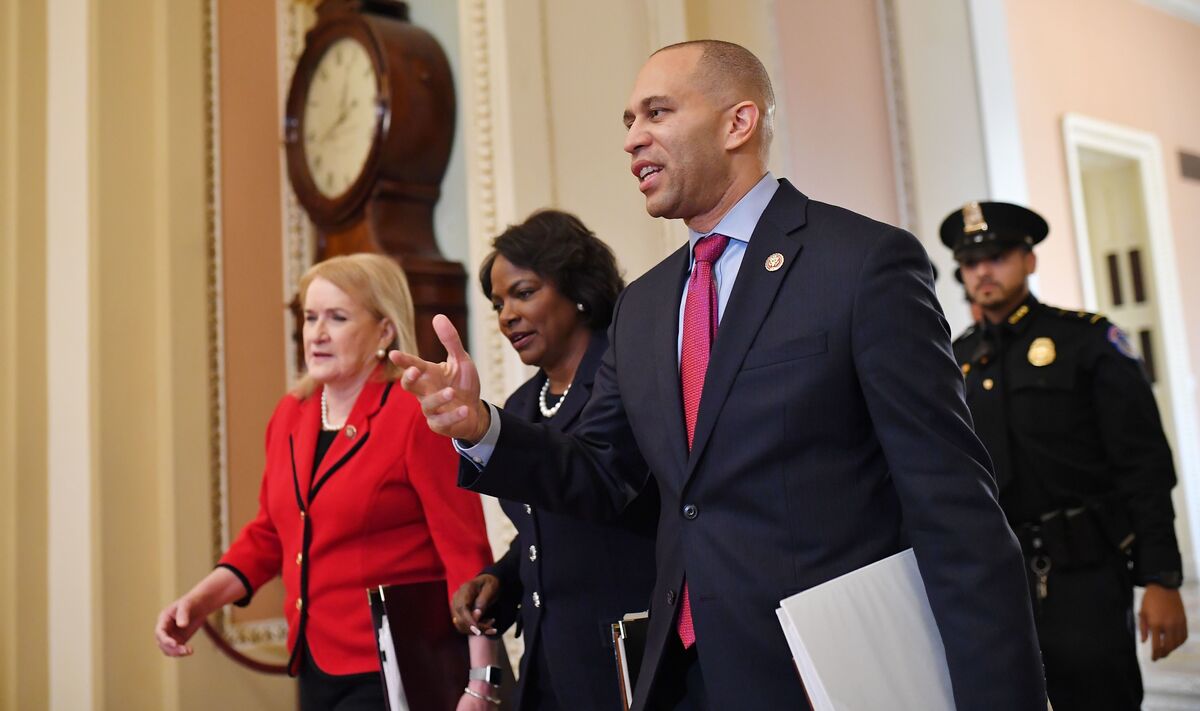 House Democrats finished their second day of oral arguments on Thursday, contending that that President Trump's attempt to pressure Ukraine into investigations was not only an attempt to cheat in the 2020 election, but Democrats said it was also the kind of behavior the nation's founding fathers hoped to guard against.

"That is why this president must be removed from office, especially before he continues his effort to corrupt our next election," said Rep. Jerrold Nadler, D-N.Y., one of the Democrats prosecuting Trump. "Simply stated, impeachment is the constitution's final answer to a president who mistakes himself for a king."

In the night's final remarks, Rep. Adam Schiff, D-Calif., said there is overwhelming evidence that the president has done what he is charged with: abuse of power and obstruction of Congress.

Democrats resume the trial of the president at 1 p.m. Friday, when House managers are expected to conclude their opening arguments.

On Thursday, the Democrats focused on Article 1 of impeachment, abuse of power, for their second day of arguments. They will take up Article 2, obstruction of Congress, on Friday. Read the text of the two articles here.

Nadler, an impeachment manager and the chairman of the House Judiciary Committee, gave extended remarks on Thursday afternoon.

He said Trump abused his power by withholding military aid and by putting off meeting with the president of Ukraine, unless the Ukrainian government investigated the activities of former Vice President Joe Biden, a possible political opponent, and his son.

Nadler told senators that conduct was wrong and dangerous.

"No president has ever used his office to compel a foreign nation to help him cheat in our elections," Nadler said. "Prior presidents would be shocked to the core by such conduct." 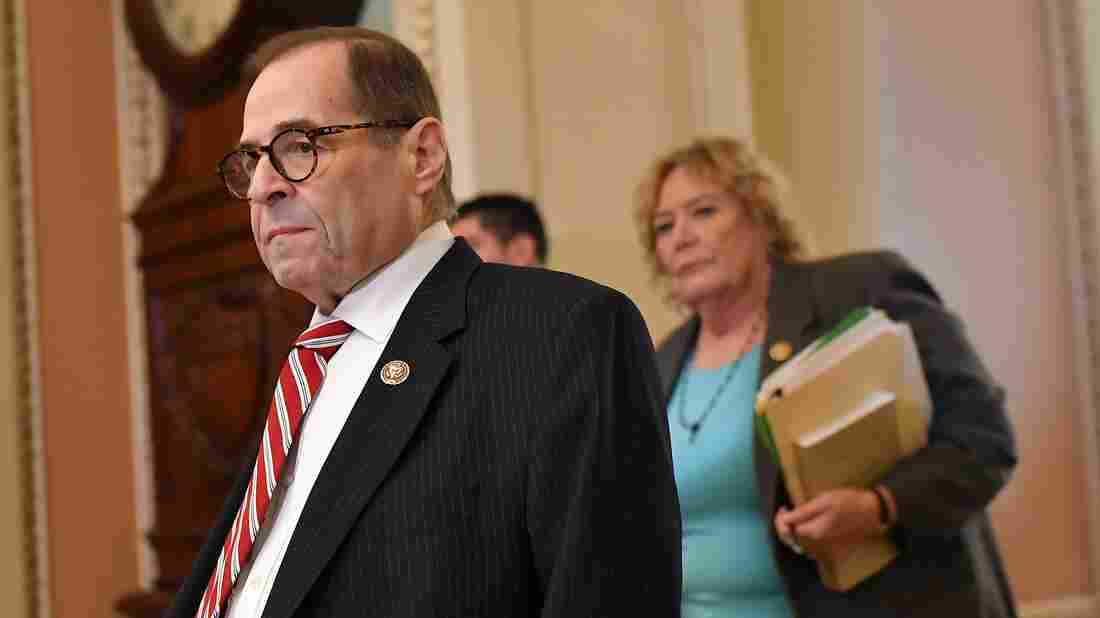 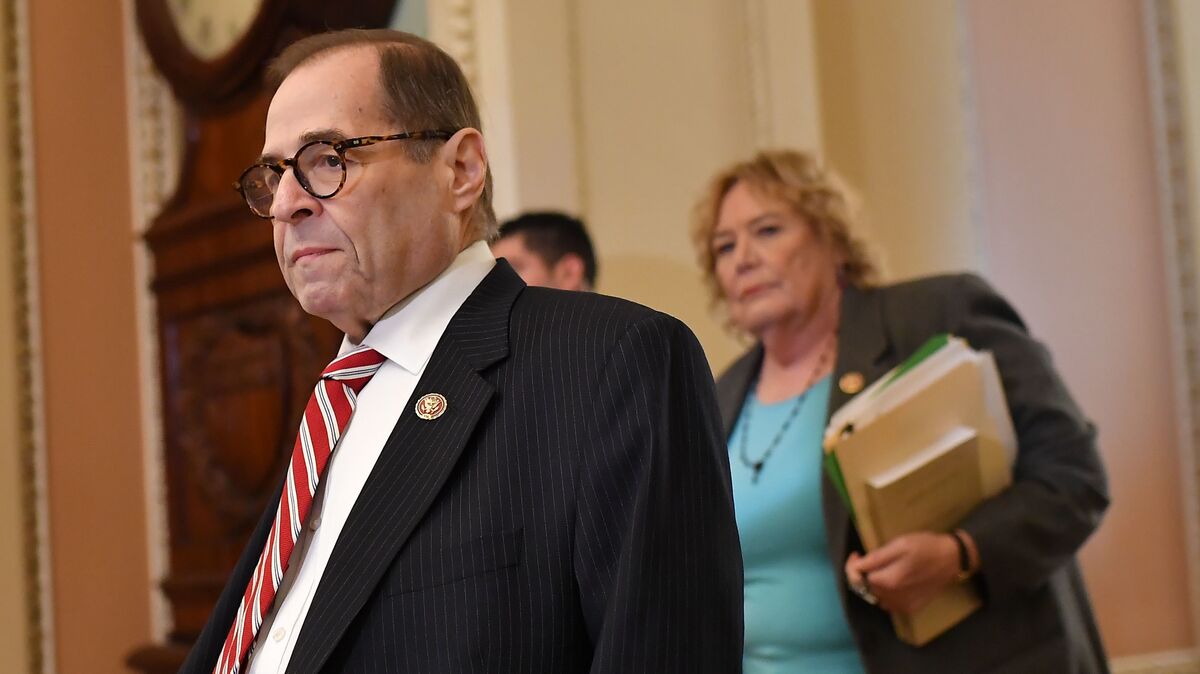 Reports that Democrats were willing to allow one of the Bidens to testify in the trial in exchange for a senior administration official's testimony were shot down by lead impeachment manager Adam Schiff, D-Calif., on Wednesday.

As Nadler began making his case, Trump tweeted that Democrats "don't want a Witness Trade" because it "would be a BIG problem for them."

The Democrats don’t want a Witness Trade because Shifty Schiff, the Biden’s, the fake Whistleblower(& his lawyer), the second Whistleblower (who vanished after I released the Transcripts), the so-called “informer”, & many other Democrat disasters, would be a BIG problem for them!

Nadler also did a bit of trolling in his presentation, playing a 1999 video clip of Sen. Lindsey Graham, R-S.C., arguing for the conviction of President Bill Clinton. Graham was a House impeachment manager at the time.

Graham argued that a "high crime" — a constitutional requirement for removing a president — "doesn't even have to be a crime. It's just when you start using your office and you're acting in a way that hurts people, you've committed a high crime."

Nadler also showed a clip of Harvard Law professor Alan Dershowitz, now one of Trump's defenders, who argued in 1998 that a high crime doesn't have to be "a technical crime." (Dershowitz has more recently argued that evidence of a crime is in fact necessary for impeachment, falling in line with the Trump White House's argument on the matter.)

Rep. Sylvia Garcia, D-Texas, followed Nadler to the well of the Senate, addressing the issue of Trump's allegations that Biden and his son Hunter had nefarious doings in Ukraine.

"The allegations against Biden are completely groundless," she said. Read a fact check about their actions in Ukraine here.

Garcia presented a slide that indicated Trump's charges against Biden coincided with polls, including one by Fox News, which showed the former vice president ahead of Trump in a possible 2020 matchup.

She also played video clips of FBI Director Christopher Wray and Trump's former national security adviser Tom Bossert throwing cold water on Trump's claims that Ukraine, not Russia, was behind the hacking of the Democrats computer server in 2016.

"We're hearing the same things over and over," he said. Sekulow added that Trump's legal team "will be putting on a vigorous defense ... and rebutting what they've said."

"We hope we can subpoena John Bolton, subpoena Mick Mulvaney," Jeffries said. "But perhaps we can all agree to subpoena the Baseball Hall of Fame, to try to figure out who, out of 397 individuals, one person voted against Derek Jeter."

Thursday's remarks on the Senate floor follow a day of presentations and arguments in which Democratic impeachment managers implored skeptical Republicans to buck their party's leadership and vote to remove the president for abusing the power of his office and obstructing Congress.

"The president's misconduct cannot be decided at the ballot box, for we cannot be assured that the vote will be fairly won," Schiff, who also chairs the House Intelligence Committee, said on Wednesday.

"In corruptly using his office to gain a political advantage and abusing the powers of that office in such a way to jeopardize our national security and the integrity of our elections, in obstructing the investigation into his own wrongdoing, the president has shown that he believes that he's above the law and scornful of constraint," Schiff said.

Trump's defense team will have its turn to counter Democratic arguments and make a case for the president's acquittal when the prosecution is finished. If Democrats take up all of their allotted time, that would mean House managers would wrap up Friday and the president's defense lawyers would mount a defense starting this weekend.

Speaking Wednesday from Davos, Switzerland, Trump called the Democrats leading his prosecution "sleazebags" and "very, very dishonest people," and he dismissed the case built against him as "a hoax."

"I think it's so bad for the country," Trump said, adding: "I'd love to go to the trial, sit in the front row and stare at their corrupt faces."

Later, Trump lawyer Sekulow bristled at the idea of the president pulling off such a stunt.

"His counsel might recommend against that," he said with a laugh.

The trial centers on Trump's dealings with Ukraine. In particular, House prosecutors say the president dangled $391 million in congressionally approved security assistance needed to counter Russian aggression as a way to get Kyiv to announce an investigation into Biden and his son Hunter. Such an announcement, House Democrats say, would benefit Trump's reelection prospects.

The president's acquittal is all but certain. Democrats would need 20 GOP senators to defy their party's leadership and vote to convict in order to remove Trump from office.

That outcome is not likely with partisan battle lines so deeply drawn, especially in the backdrop of how Americans are deeply divided over impeachment and with the nation watching as the political proceeding plays out ahead of a presidential election.

The White House has blocked key witnesses from participating in the trial and has not cooperated with subpoenas from House investigators. Democrats need four Republicans to join them to win a procedural battle that will enable them to request documents or witness testimony. There are no indications right now that any GOP senators will break with their leadership.