Accessibility links
Myanmar Must Prevent Genocide Of Rohingya, U.N. Court Rules In a unanimous decision, a 17-judge panel said Myanmar must take steps to protect the Muslim minority Rohingya, who "remain extremely vulnerable" after a brutal 2017 crackdown by the military. 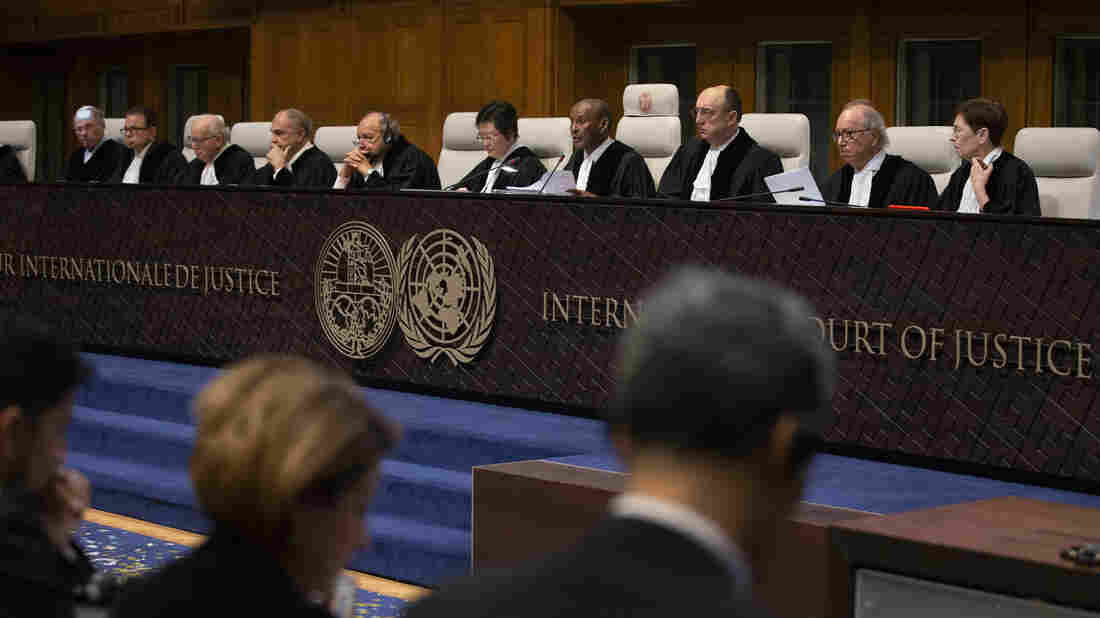 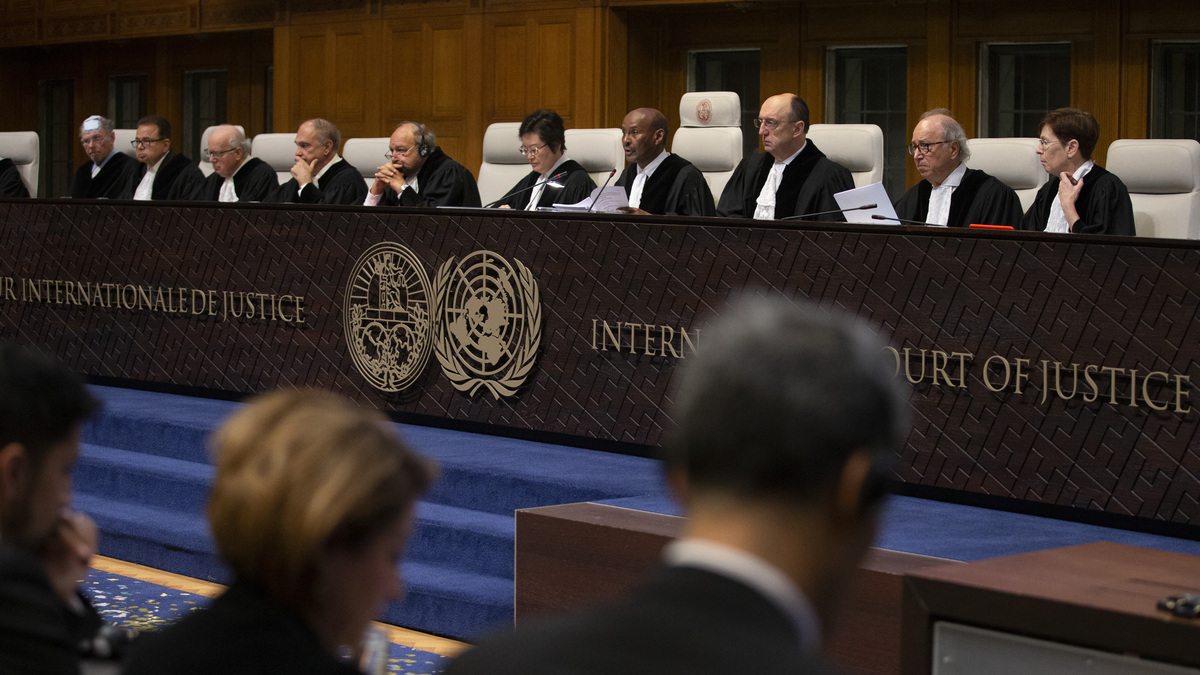 Presiding Judge Abdulqawi Ahmed Yusuf, fourth from right, reads the ruling. The panel said Myanmar must take steps to protect the Muslim minority, who "remain extremely vulnerable" after a brutal 2017 crackdown by the military.

The International Court of Justice in The Hague has ordered Myanmar to prevent a genocide of the country's remaining Rohingya Muslims — the target of a brutal army crackdown that led to the deaths of tens of thousands.

Presiding Judge Abdulqawi Ahmed Yusuf, reading the unanimous opinion of the 17-judge panel, said the United Nations court "is of the opinion that the Rohingya in Myanmar remain extremely vulnerable" after the 2017 crackdown in the country's western Rakhine state.

The court in the Netherlands was acting on a request from the tiny Muslim-majority country of Gambia for measures to protect the Rohingya. Gambia brought the complaint on behalf of the 57-nation Organization of Islamic Cooperation, which alleges Myanmar is guilty of genocide against its Rohingya minority. Myanmar is a signatory of the 1948 Convention for the Prevention and the Punishment of the Crime of Genocide.

Thursday's ruling is meant to forestall further harm to Rohingya while the court works toward a final ruling on the question of genocide, which could take years. The ICJ also ordered Myanmar to preserve evidence of the Rohingya's persecution and to report in four months on the protective measures it has taken.

The country's de facto leader, Aung San Suu Kyi, wrote in an opinion piece Thursday that Rohingya refugees interviewed by investigators in neighboring Bangladesh may have exaggerated claims of violence.

The allegations against her country "all rely extensively on a fact-finding mission by the UN Human Rights Council. This is precariously dependent on statements by refugees in camps in Bangladesh," Suu Kyi writes in the Financial Times, referring to an Independent Commission of Inquiry, which published its findings earlier this week.

The ICOE concluded that while some Myanmar soldiers probably committed war crimes and that the military crackdown had been conducted with "genocidal intent," there was no actual genocide.

"The ICOE reports that some refugees may have provided inaccurate or exaggerated information. While this is understandable, we have to recognise that there is a systemic challenge," she writes, suggesting that the ICJ "may not yet be equipped to filter out misleading information before shadows of incrimination are cast over entire nations and governments."

A 2018 report by the U.S. State Department described the military's actions as "extreme, large-scale, widespread" but also steered clear of the term genocide. 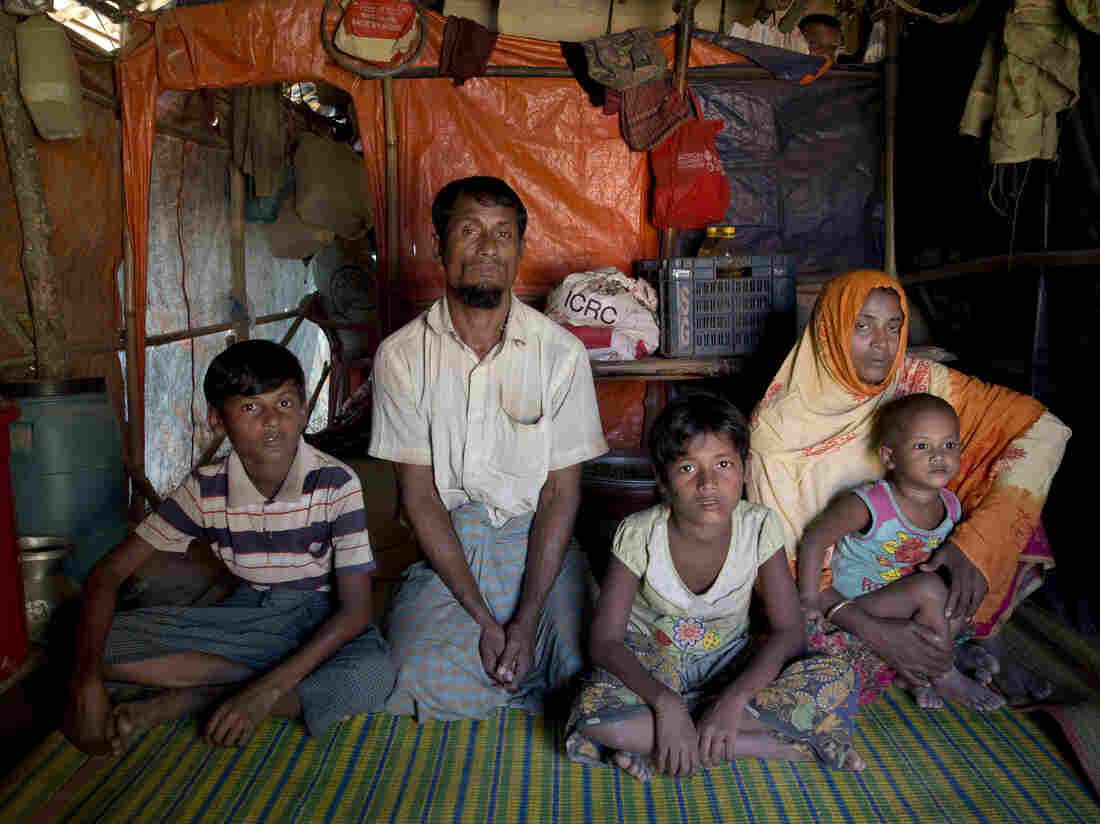 A Rohingya Muslim man Nabi Hossain sits for a photograph along with his family inside the Unchiprang refugee camp near Cox's Bazar in Bangladesh in November 2018. Dar Yasin/AP hide caption 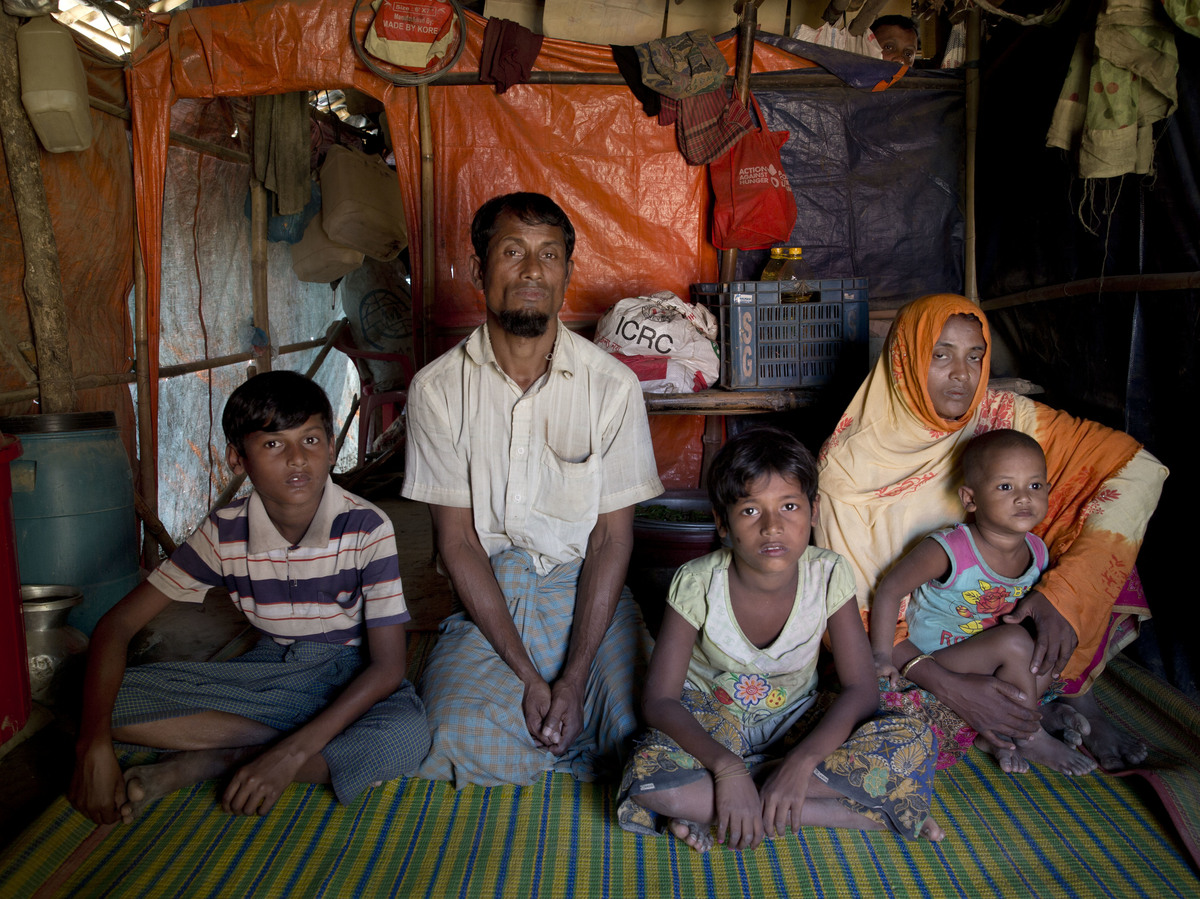 A Rohingya Muslim man Nabi Hossain sits for a photograph along with his family inside the Unchiprang refugee camp near Cox's Bazar in Bangladesh in November 2018.

The plight of the Rohingya — long a persecuted minority in Myanmar — has brought international scrutiny to the government of Suu Kyi, a Nobel Peace Prize winner once lauded as a defender of human rights who has nonetheless faced accusations that she stood aside as her country's military carried out a campaign of terror against the Rohingya.

The U.N. estimates that at least 10,000 Rohingya were killed by Myanmar's state forces in the August 2017 crackdown, but others put the number higher. Human Rights Watch says another 730,000 fled Myanmar, crossing the border into Bangladesh, since the crackdown began in August 2017.

That crackdown came in response to a 2016 attack by the Arakan Rohingya Salvation Army, a militant group, on local police.

In a hearing at the court last month, Suu Kyi acknowledged that the military may have used "disproportionate force ... in disregard of international humanitarian law" in its response, but that was understandable given the "coordinated and comprehensive attacks" of the militants.