Accessibility links
Review: In 'The Gentlemen,' Manners Get Tabled Guy Ritchie returns to the genre he made his bones on, and the film's "rigorous and largely circular" plot is fun; more fun than McConaughey's undercooked performance, anyway.

A Drug Kingpin Worries Over His Imminent Regicide In 'The Gentlemen'

A Drug Kingpin Worries Over His Imminent Regicide In 'The Gentlemen' 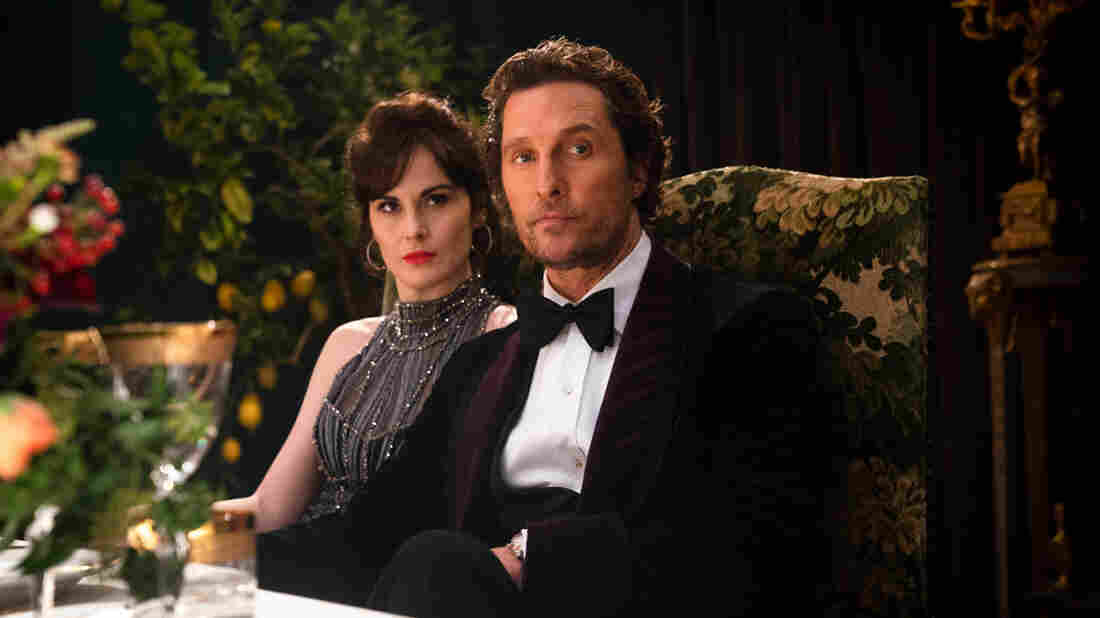 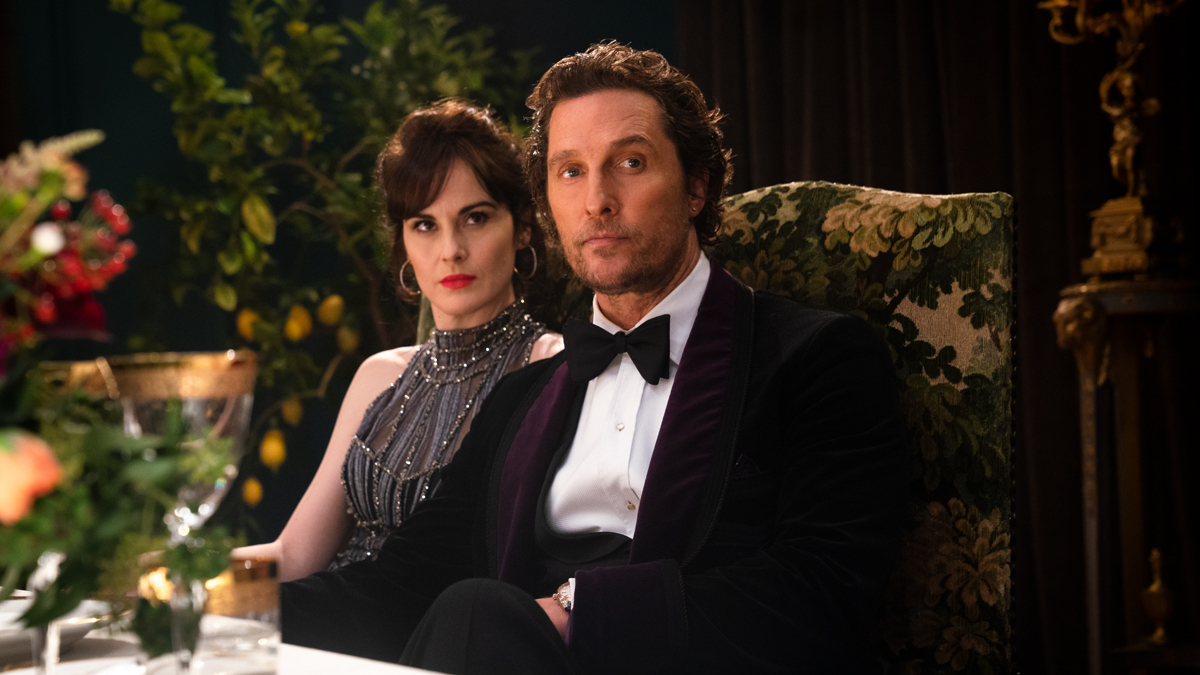 Rosalind (Michelle Dockery) and Mickey (Matthew McConaughey) in The Gentlemen.

The genie is out of the bottle. The motormouthed magician of whom I speak is Guy Ritchie. The Gentlemen finds the unlikely director of Aladdin v.2019 released from Disneyland to return to his distinctly loquacious crooks played by distinctly memorable actors. It's the milieu that made him, and still the one that uses his gifts for language and misdirection best. If The Man from U.N.C.L.E. hadn't been so good (and so sadly underseen), I'd say he should never be allowed to make a movie for more than $50 million.

That would be Mickey, played by Academy Award-winning sentient tanning bed Matthew McConaughey and a formidable array of plaid suits. He's angling to sell his marijuana empire to fellow American expat Matthew (an unrecognizable Jeremy Strong) and spend more time with spouse Rosalind (Michele Dockery), who runs a garage specializing in high-end cars.

Mickey's sales pitch to Matthew gets into the weeds, as it were, about how he has flourished cultivating and distributing his "skunk-a-mola white widow super cheese," and the details of his criminal conspiracy are intriguing and plausible. Also, Rosiland isn't sure she wants Mickey to retire, a wrinkle that gives the movie's only significant female character more nuance and agency than you might expect. In six seasons of Downton Abbey, Dockery never once got to say, "There's f***ery afoot." Points to Ritchie and his writing partners Ivan Atkinson and Marn Davies for each of these things. (I'll be taking several of those points away shortly.)

As usual with Ritchie, the plot is rigorous and largely circular. The filmmaker's kinetic, self-aware way of "laying pipe," as Hugh Grant's scuzzy P.I. character says during one of his many flights of semi-reliable narration, is the main attraction here, even more than the vibrant cast he's assembled. A few of these players, like Grant and Colin Farrell (sublime as a boxing coach trying to extricate himself from the underworld and instill virtue in his young fighters), have only gotten better in the years since they traded in stardom for blue-chip character actor status. Charlie Hunnam, star of Ritchie's 2017 flop King Arthur, is great too, playing Mickey's fastidious lieutenant. Henry Golding, a breakout star after Crazy Rich Asians, is a world removed from heartthrob turf as a lean-and-hungry gangster called Dry Eyes. His threat to Mickey goes like this: "When a silverback has more silver than back, he best move on before he gets moved on." More points!

You wonder if McConaughey noticed all the intriguing choices his castmates made, because he gives the least compelling performance in the movie by a country mile. Not for the first time, his vanity is a problem: Because we sense he is unwilling to allow another actor to have the upper hand not just in the film but in any individual scene, there's just not much suspense about his fate. Since we never buy for one second that Mickey might lose, the film's pleasures prove more mechanical than emotional.

I wish I didn't have to spend a couple of paragraphs on this, but there's no getting around it: The Gentlemen torpedoes much of the goodwill it earns in its first 95 minutes when Dockery's character, Rosalind — a businesswoman whose authority has been persuasively established, but again, also the only woman in the film who gets more than a line or two — is suddenly threatened with rape.

Without dismissing the fact that sexual assault in real life happens sans provocation by people who exhibit no obvious sign of being rapists all the time, the movie's shrugging handling of the episode is at best irresponsible and at worst deeply sexist. The prevailing attitude seems to be that the true victim of the assault is not the woman who gets groped and forced over a desk, but her husband, played by the film's top-billed star, who kicks in the door just in time to shoot the would-be rapist dead before he can get his pants down. Everything I've just described occurs in perhaps only 60 seconds' screen time, a minute that contributes nothing to the movie and costs it a great deal.

Thus my conditional endorsement of The Gentlemen now comes with a large and ugly asterisk. That's more than a shame. It's a crime.