Accessibility links
Doomsday Clock Ticks To 100 Seconds Before Midnight The two-minute warning that had held over the past two years has now shrunk to 100 seconds before midnight on the Doomsday Clock set by the Bulletin of the Atomic Scientists. 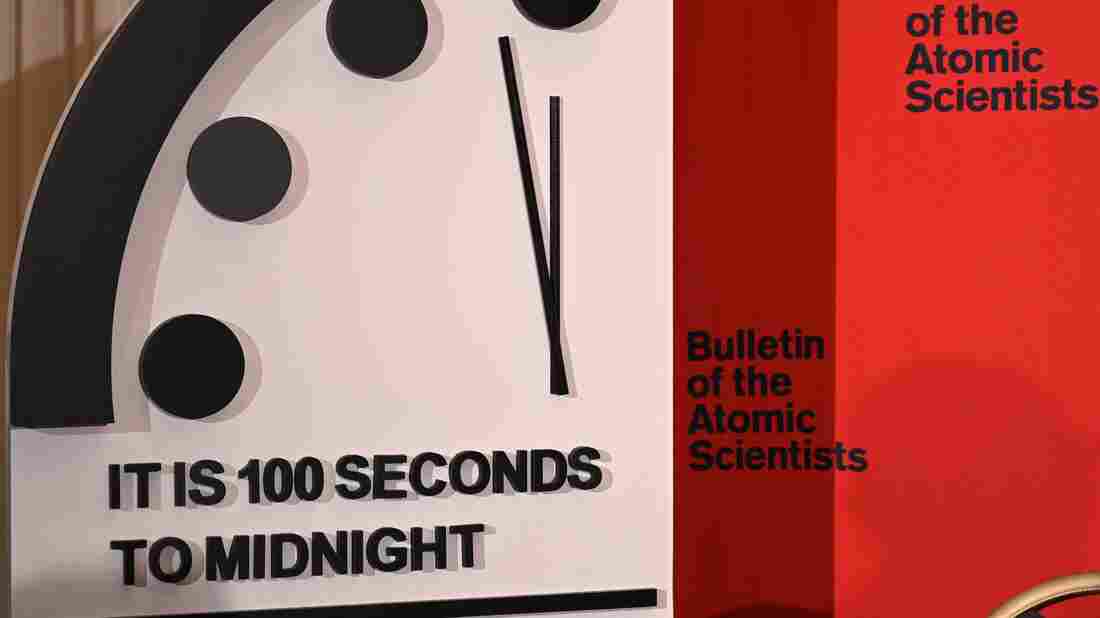 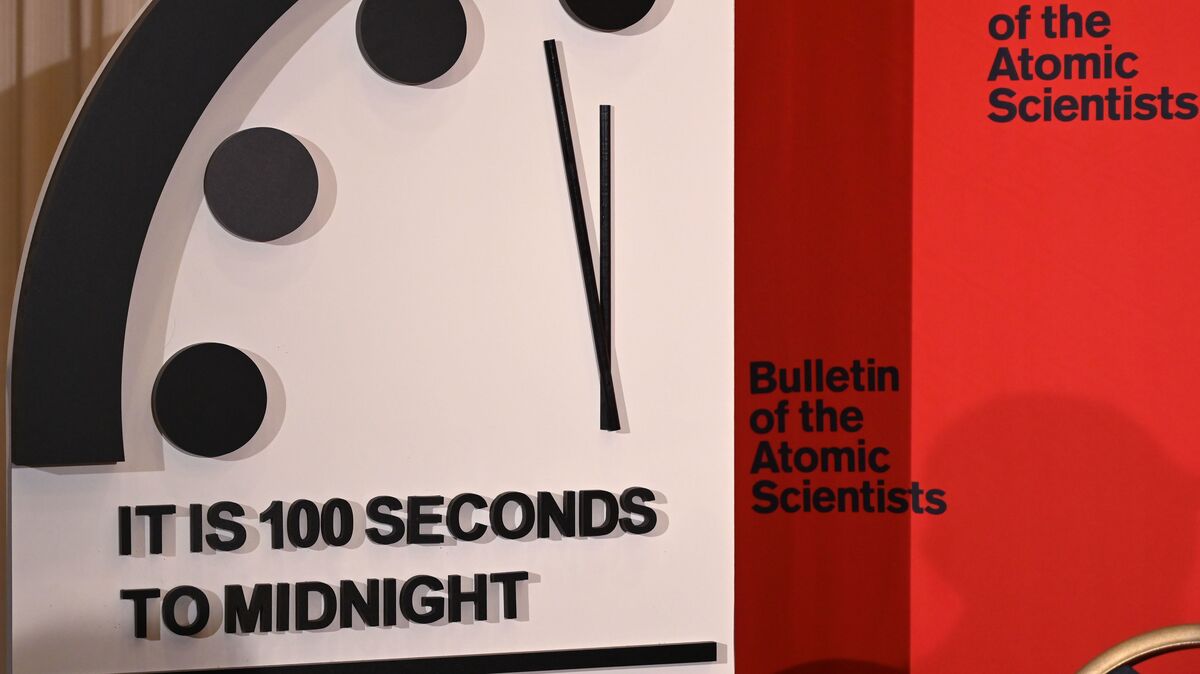 The Doomsday Clock reads 100 seconds to midnight, a decision made by the Bulletin of the Atomic Scientists that was announced Thursday. The clock is intended to represent the danger of global catastrophe.

Two years after moving the metaphorical minute hand of its Doomsday Clock to within two minutes of midnight — a figurative two-minute warning for all humanity — the science and security board of the Bulletin of the Atomic Scientists revealed Thursday that it has moved that minute hand another 20 seconds closer to the midnight hour.

"It is 100 seconds to midnight," declared the Bulletin's president and CEO, Rachel Bronson, at a Washington, D.C., news conference as a black cloth was lifted to reveal the clock.

Never since the clock's 1947 Cold War debut has it come so close to the putative doomsday annihilation represented by the 12 a.m. hour.

"The Doomsday Clock is a globally recognized indicator of the vulnerability of our existence," said former Irish President Mary Robinson at the annual clock-unveiling ceremony. "It's a striking metaphor for the precarious state of the world, but most frighteningly, it's a metaphor backed by rigorous scientific scrutiny."

With 13 Nobel laureates on its board and founded by scientists who worked on the atomic bomb-building Manhattan Project during World War II, the University of Chicago-based Bulletin of the Atomic Scientists has used its Doomsday Clock to register existential threat levels and raise awareness of them.

In 1953, months after the U.S. tested its first hydrogen bomb and as the Soviet Union was about to do the same, the Doomsday Clock was also set within two minutes of midnight. The minute hand was moved back gradually as nuclear arms control agreements reduced the threat of global catastrophe.

By the time the Soviet Union collapsed and the Cold War ended in 1991, the clock was set at an unprecedented 17 minutes to midnight. It has moved closer ever since.

"What you're hearing," said former California Democratic Gov. Jerry Brown, who appeared at the event as the Bulletin's new executive chairman, "is really the voices of the prophets of doom. Speaking of danger and destruction is never very easy — if you speak the truth, people will not want to listen, because it's too awful and it makes you sound like a crackpot."

The clock's minute hand was moved forward after the August 2019 collapse of the 1987 Intermediate-Range Nuclear Forces Treaty between the U.S. and Russia. The demise of the pact frees both nations to deploy land-based missiles over ranges that leave little time for a response.

There were also growing signs in 2019 that the Trump administration was aiming to withdraw from the Open Skies Treaty, which allows the U.S. and Russia to observe one another's military installations through closely monitored overflights.

And Iran increased its stockpile of low-enriched uranium and added new and improved centrifuges last year in the aftermath of the U.S. withdrawing from a multination nuclear pact with Iran that was forged during the Obama administration.

"I have to admit [that] we set the clock in November," said George Washington University research professor Sharon Squassoni. "This was before recent military actions by the U.S. and Iran, Iran's statement or threat that it might leave the Nuclear Non-Proliferation Treaty, and North Korea's abandonment of talks with the United States."

A growing number of disasters linked to global climate change resulting from the continued consumption of fossil fuels was another factor cited for moving the clock even closer to midnight.

"We're in it, it's dire, but we're not there yet," said Brown. "We can still pull back from the brink, but we have to do what we're not doing. Whatever we've done to date, it is totally inadequate."

Brown, who served four terms as California's top executive, noted that he'd spent his life seeking the favor of powerful people whom he described as "totally ignorant, blind and deaf to our predicament."

"So the task is wake up," the 81-year-old former governor concluded. "Wake up America, wake up the world — it is 100 minutes before doomsday!"

"One hundred seconds before doomsday," she murmured, amid laughter.

"Seconds?" replied Brown. "Well, it just shows you, we don't even know what the hell we're talking about! There's Exhibit A of why we've got a problem! It is definitely more serious than minutes — it's seconds."