Accessibility links
Some Senators Snooze, Other Resist Nodding Off During Trump Impeachment Trial Impeachment trial rules say senators are not to talk. They can't have their phones. And coffee is banned from the chamber. And so, some senators are grappling with something basic: staying awake. 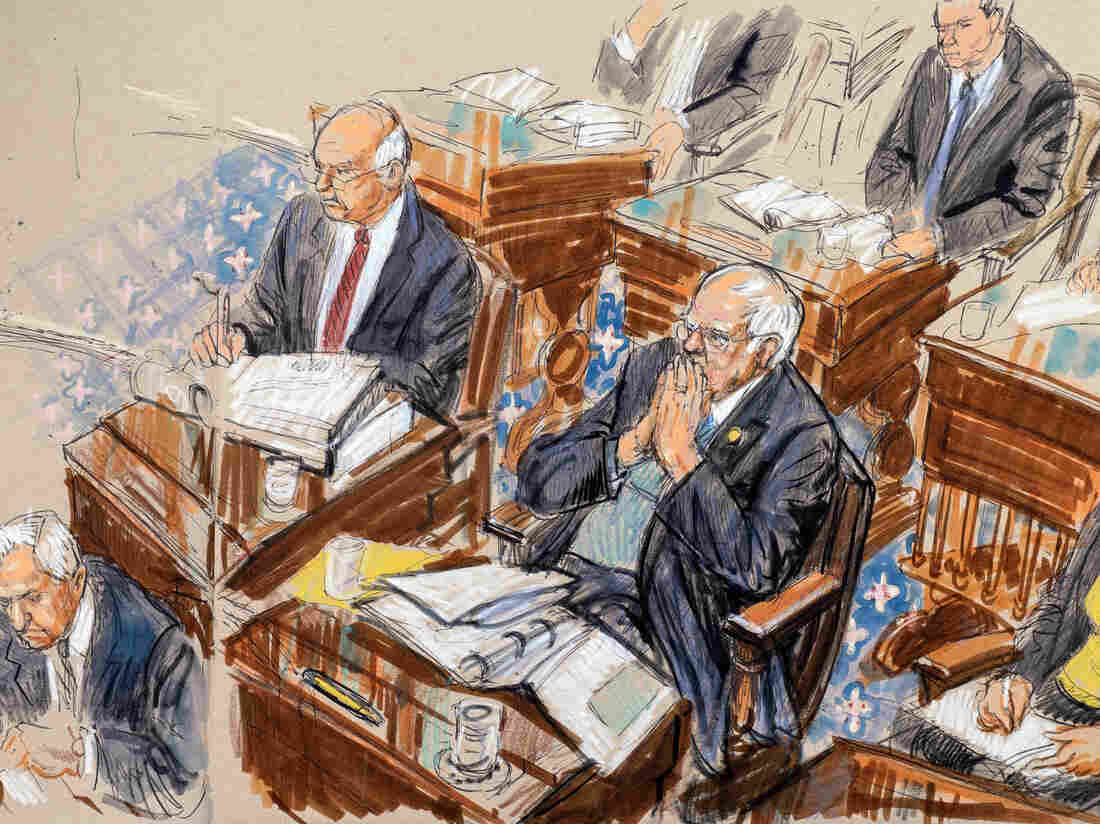 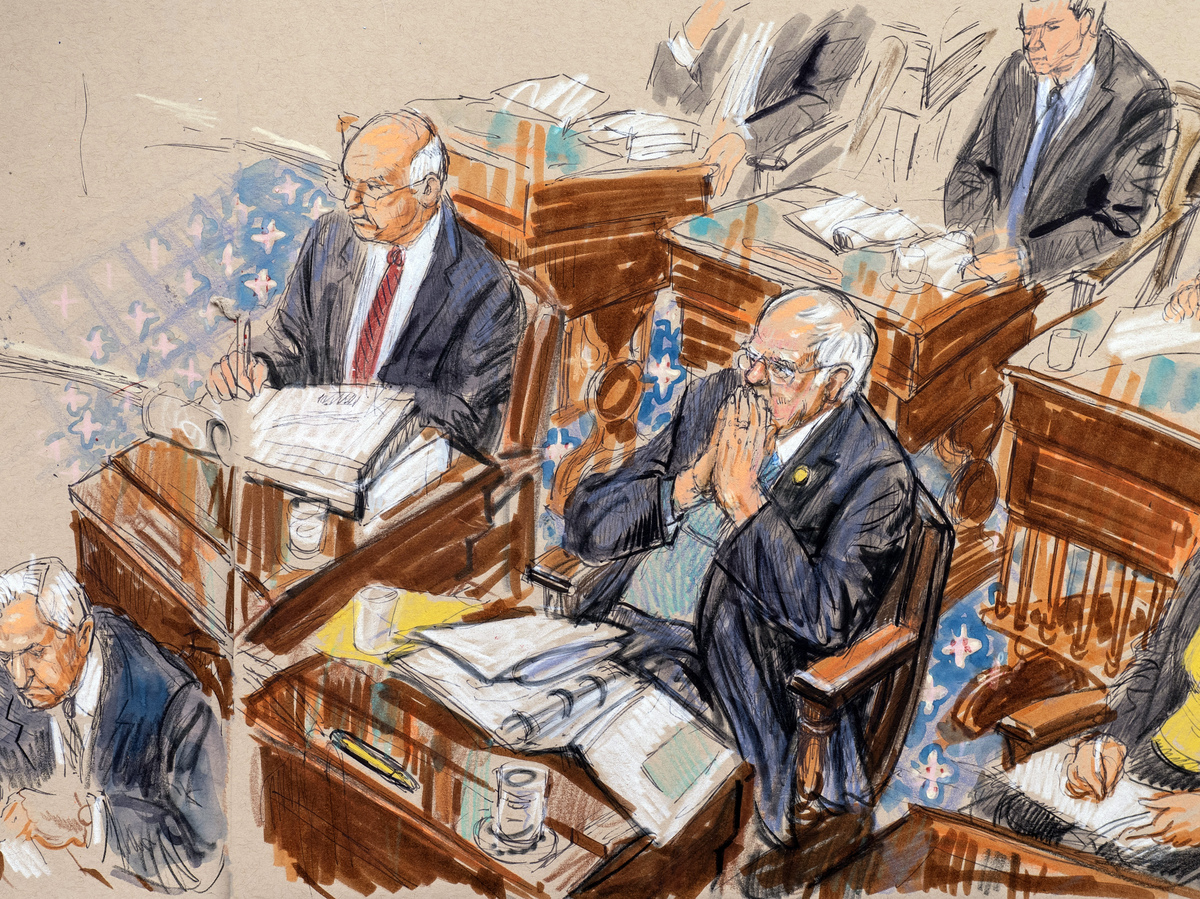 Around dinnertime on Tuesday, just about four hours into the impeachment trial of President Trump, Sen. Jim Risch, R-Idaho, did not look enthralled by House Democrats' presentations. In fact, he looked the opposite. Eyes closed, he was slumped over and appeared to be snoozing.

The sleepy interludes demonstrate a struggle many senators are fighting during the trial's marathon sessions: resisting the urge to nod off as the tiring days test stamina and patience.

"It's constitutionally difficult for senators to be quiet and sit that long. It's not how we're built," Sen. John Cornyn, R-Texas, told reporters on Thursday.

Under the trial's strict rules, the elected body must be engaged from the sessions start to finish with arguments revolving around accusations the Trump held up military aid and put off a meeting with the president of Ukraine in an effort to try to get an investigation into political rival former Vice President Joe Biden and his son.

Every day, the Senate's sergeant-at-arms kicks off the session with a decorous reminder of the hush-hush guidelines, noting how violators could face a stiff penalty.

Indeed, they are not supposed to talk to one another. Senators are also not allowed to pass notes. Snacks are banned (but water and milk is OK). Cellphones and other devices are to be stored in a cubby outside of the chamber. Senators must attend the long trial sessions six days a week. And the whole time, coffee is not permitted into the chamber, a point creating stress from some senators.

"I drink coﬀee from the minute I wake up until bedtime," Sen. Kevin Cramer, R-N.D., told The Wall Street Journal. "So my biggest challenge is to drink enough coﬀee to stay awake, but not drink so much that I, you know, that I'm, ah, uncomfortable in the chamber."

Undercaffeinated senators are devising creative ways to pass the time.

First – I'm reading Resistance (At All Costs) by Kim Strassel. Read the chapter on obstruction. It provides good insights into today’s proceedings.

Second – busy mamas are the best at multi-tasking. Try it. https://t.co/AEHW19ZztL

Sen. Lindsey Graham of South Carolina wrote large notes on his notebook and then tilted them up toward his Senate colleague, Sen. John Barrasso, R-Wyo.

Other senators needing to stretch their legs or craving a break, whether mental or otherwise, strolled to the cloakroom for brief respite.

Sen. Cory Booker, D-N.J., told The Washington Post that pacing in the back of the chamber helps him stay mentally stimulated and that he hoped the House managers do not take offense to his frenetic habit.

"It actually helps me think and stay focused, frankly, on what's going on," Booker said.

Senators voted on Tuesday to allow the 24 hours of opening arguments to be spread over three days instead of two, but the sessions were still managing to test fortitude and patience, especially because, for most senators, the arguments are not likely to change their position.

A nearly party-line vote on the two articles of impeachment is expected, meaning the replay of arguments and testimony from the House impeachment inquiry is not likely to budge any opinions.

"The subject matter is something we've all heard," Sen. Mike Braun, R-Ind., said to reporters.

After a nearly nine-hour day on Wednesday, Rep. Adam Schiff, D-Calif., the lead House impeachment manager, acknowledged that staying engaged during the long days is no easy feat. Presenting hours upon hours of arguments, he said, is also tiring.

"It was an exhausting day for us, certainly. But we have adrenaline going through our veins. And for those that are required to sit and listen, it is a much more difficult task," Schiff said.

It is made even more uncomfortable, Cornyn said Thursday, when the chamber's chairs are less than ergonomic.

"They're not particularly built for comfort, I will tell you that," Cornyn said. "I keep sort of sliding out of it."

A previous version of this story incorrectly identified Sen. Bernie Sanders as a Democrat. He is an independent who caucuses with the Democrats.