Accessibility links
House Managers Finish Opening Arguments In Impeachment Trial On the floor, House impeachment managers stressed the president would not hesitate to investigate any political rival. Outside the chamber, senators sparred over issuing subpoenas. 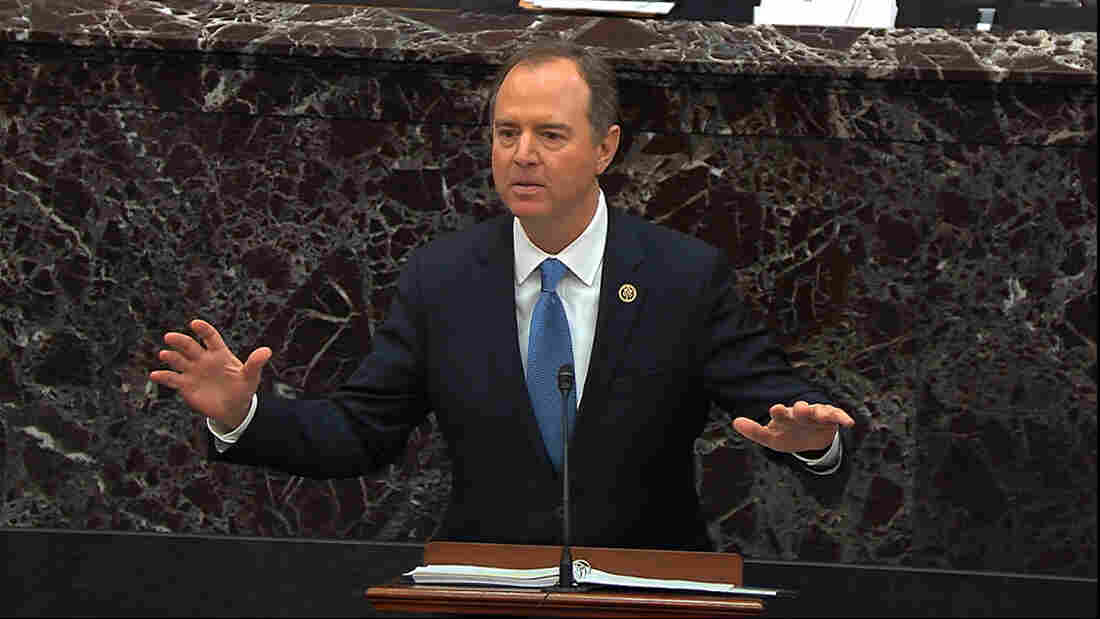 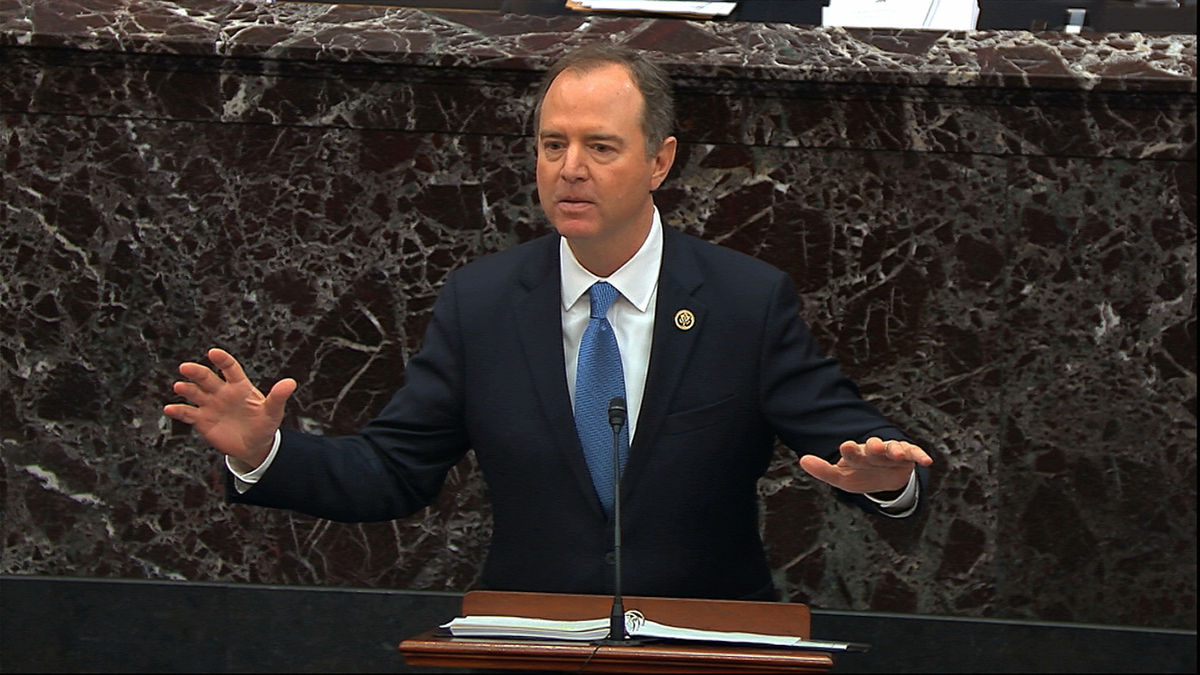 House Democrats on Friday finished their third and final day of arguments that President Trump, impeached by the House, now should be convicted and removed from office by the Senate.

The president's lawyers will get their turn to lay out the case for acquittal starting this weekend.

Lead impeachment manager Adam Schiff, D-Calif., continued to lay out the arguments behind the first article of impeachment, which charges that the president abused the power of his office by withholding $391 million in military aid to Ukraine while he pressured the Ukrainian government to open an investigation into the activities there of former Vice President Joe Biden and his son Hunter.

As Schiff did so, he played a clip of the late Sen. John McCain, R-Ariz., saying, "We are all Ukrainians."

He added, "And if somewhere deep down below, you realize that he would, you cannot leave a man like that in office."

Rep. Hakeem Jeffries, D-N.Y., another manager, charged that Trump "created a toxic mess at 1600 Pennsylvania Avenue." He said Trump "tried to cheat, he got caught, and then he worked hard to cover it up."

As Schiff finished the Democrats' 24 hours of opening arguments just before 9 p.m. Friday, he pleaded with his last words to the Senators present.

"I implore you, give America a fair trial," Schiff said. "She's worth it."

Defense of the president

Trump's legal team is set to begin its own opening arguments on Saturday at 10 a.m. ET.

The lawyers will speak for about three hours on Saturday to lay out "coming attractions" for the impeachment trial next week — including a discussion of efforts to dig up dirt on Trump during his 2016 election campaign through a dossier compiled by former British spy Christopher Steele — said Jay Sekulow, one of Trump's attorneys.

Sekulow told reporters on Capitol Hill on Friday that Trump's team will respond to issues raised by Democratic House managers, including foreign interference in the 2016 election and the hiring of Hunter Biden by a Ukrainian gas company.

Like the House managers, Trump's lawyers have 24 hours over three days to make their case, before a period of questioning by the senators.

Trump had weighed in against a long Saturday session, tweeting on Friday morning that Saturday "is called Death Valley in T.V."

The question of executive privilege

Outside the Senate chamber, Republicans and Democrats continued their debate over whether additional witnesses should be called. Arguments were aimed in particular at a handful of Republican senators, such as Susan Collins of Maine and Mitt Romney of Utah, who might be persuaded one way or the other.

Republicans have been arguing that hearing from additional witnesses would stretch out the proceedings, particularly if the Trump administration challenges the subpoenas as a violation of executive privilege. That's the doctrine that permits a presidential administration to conceal some of its workings from the public.

Fractured Into Factions? What The Founders Feared About Impeachment

Schiff scoffed at the notion that the Senate should refrain from calling witnesses over such a possibility. Moreover, he argued, executive privilege is to protect legitimate deliberations and can't be used to shield wrongdoing.

"This is not a trial over a speeding ticket or shopping ticket; this is an impeachment trial involving the president of the United States," Schiff told reporters.

Senate Minority Leader Chuck Schumer, D-N.Y., said that if subpoenas were issued by the Senate, "by definition, the subpoenas will be bipartisan and they will be signed by the chief justice of the United States" — implying they would have additional weight and be less likely to be challenged in court.

The president and his supporters have maintained that Trump had real concerns about corruption in Ukraine, saying the call for probes was not driven by a desire to boost Trump's own political prospects. They say it is Democrats who are seeking political gain by launching an inquiry in the first place.

Republicans have largely stood by Trump, and because they hold a majority in the Senate, Trump is likely to be acquitted of both charges.