Accessibility links
As Esports Take Off, High School Leagues Get In The Game Today, more than 170 colleges and universities offer esports. And there's money on the table — more than $16 million in college scholarships. Naturally, high schools have followed suit. 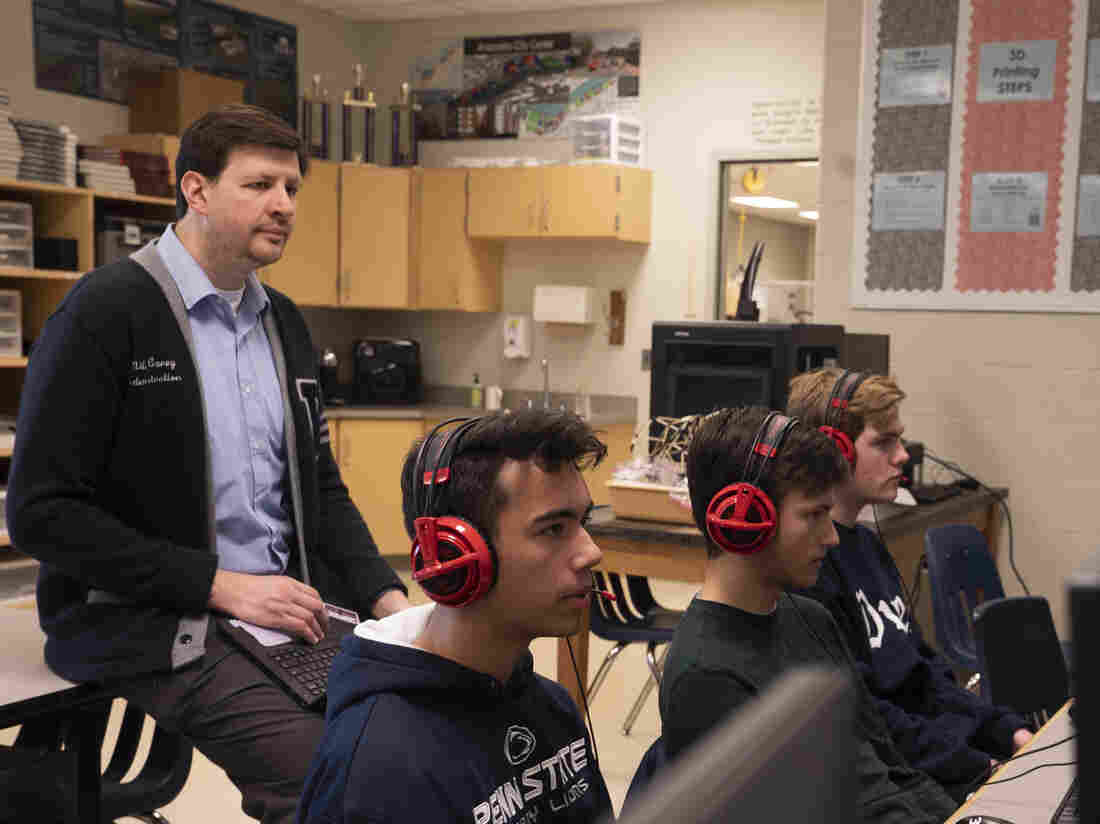 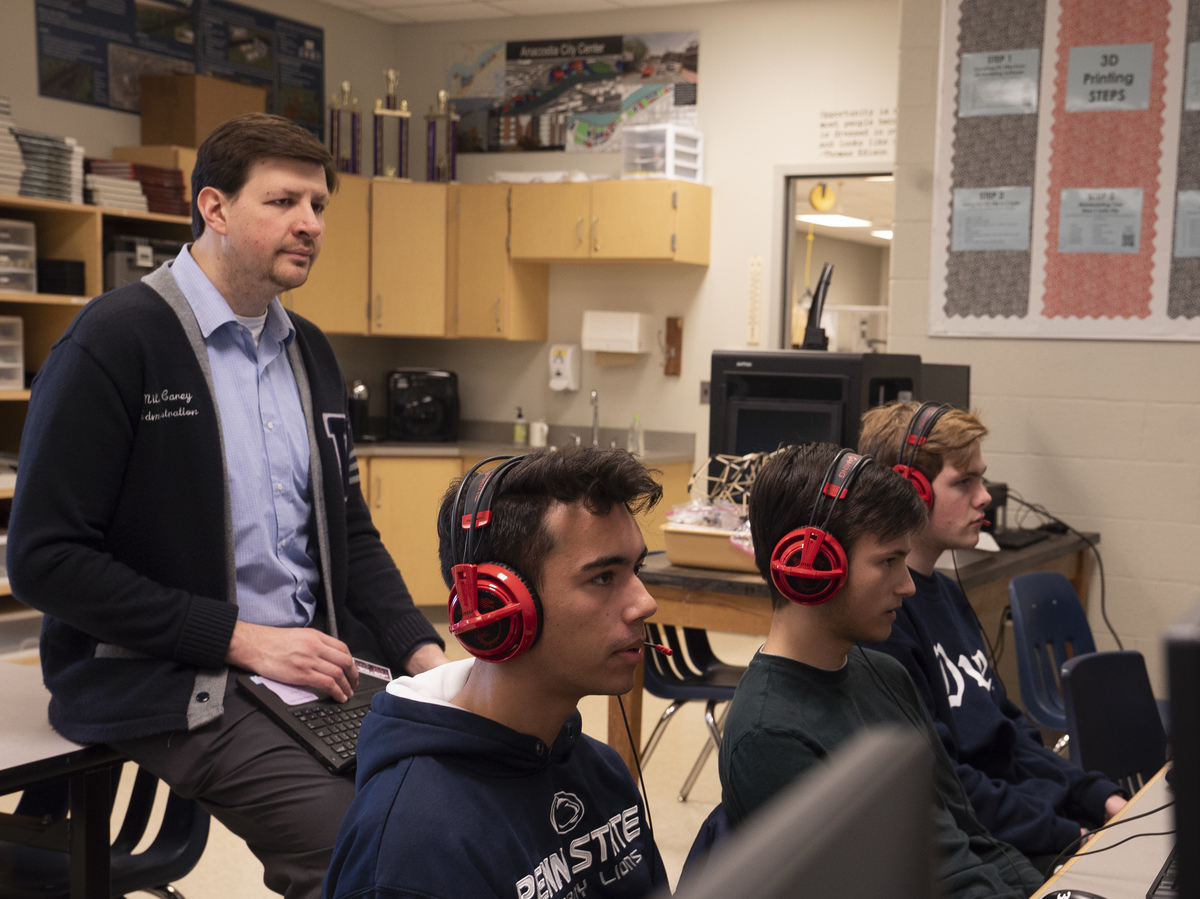 Nowadays, if you're a teenager who's good at video games there's a lot more to be had than just a pot of virtual gold.

Today, more than 170 colleges and universities participate. And there's money on the table — more than $16 million in college scholarships. Naturally, high schools have followed suit.

This year, 17 states and the District of Columbia are offering formal esports teams.

Kids perfect their skills alongside teammates with the help of a high school coach. They run drills, develop strategy, review game footage and compete against other teams across their state.

But most high schools don't house their esports teams under athletics. In Virginia, the league is considered an academic activity. 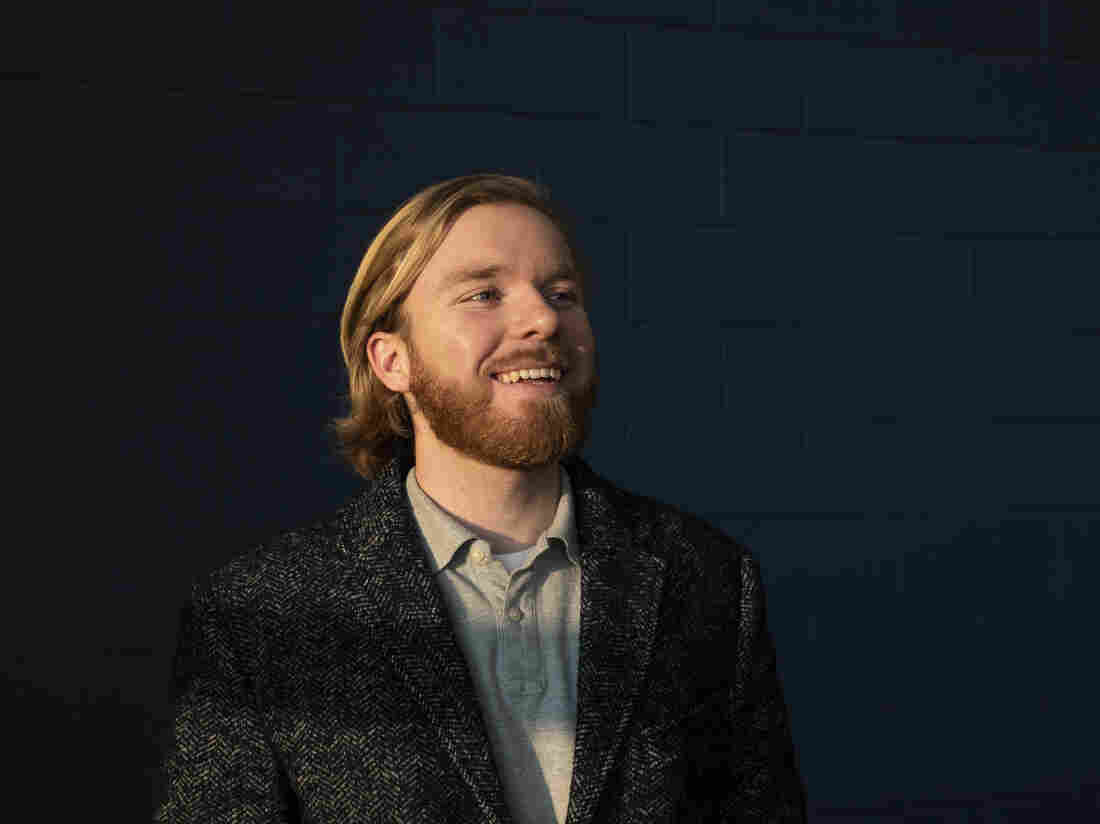 Coach Justin Snow describes Rocket League as the perfect game — the computers do very little to direct the mechanics of the match and the players are in complete control. Kisha Ravi/NPR hide caption 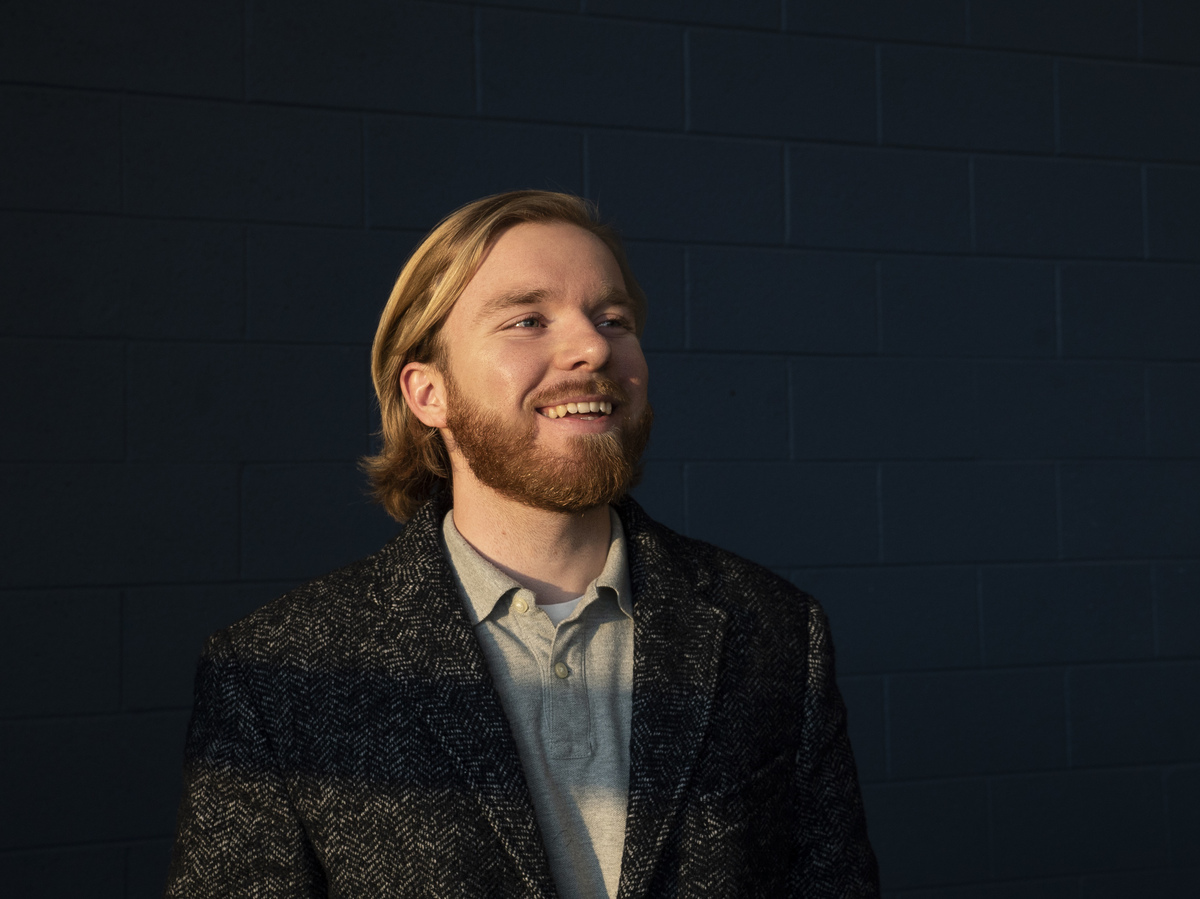 Coach Justin Snow describes Rocket League as the perfect game — the computers do very little to direct the mechanics of the match and the players are in complete control.

Scooter Norton is a senior and captain of Washington-Liberty's Rocket League Team. He and his teammates Calvin Forinash and Matthew Goodwin have known one another since they were in kindergarten and have been playing Rocket League together for three years.

"When this opportunity came around, I don't think there was any hesitation from us about whether we would do it. It was just a matter of whether our parents would let us," Forinash says.

All three said their parents have at times resisted their desire to play video games.

"My dad really kind of struggles to accept that I want to have this as an extracurricular activity," Goodwin says. "My mom has been pretty chill about it, but my dad still has a learning curve."

Goodwin is a dedicated soccer player and will be playing on his college team next year. He says that when talking to his dad, he tries to explain how the two activities aren't that different.

Go To College, Play Video Games. E-Sports Make A Play For The Big 10

"We're playing soccer with cars and it's just on a screen," Goodwin says. "There isn't a big difference between the two except that one requires actual physical activity."

In some cases, the decision of high schools to begin offering competitive esports leagues as a school sponsored extracurricular has been enough to change parents' minds.

Scooter Norton's mother, Cynthia Perera says that while she and her husband always supported their children's athletics without question, esports were a source of conflict.

She pushed to limit Norton's time spent playing — and still monitors it — which led to many fights.

But since the Virginia High School League decided to offer this year's esports pilot she says her perspective has changed substantially. 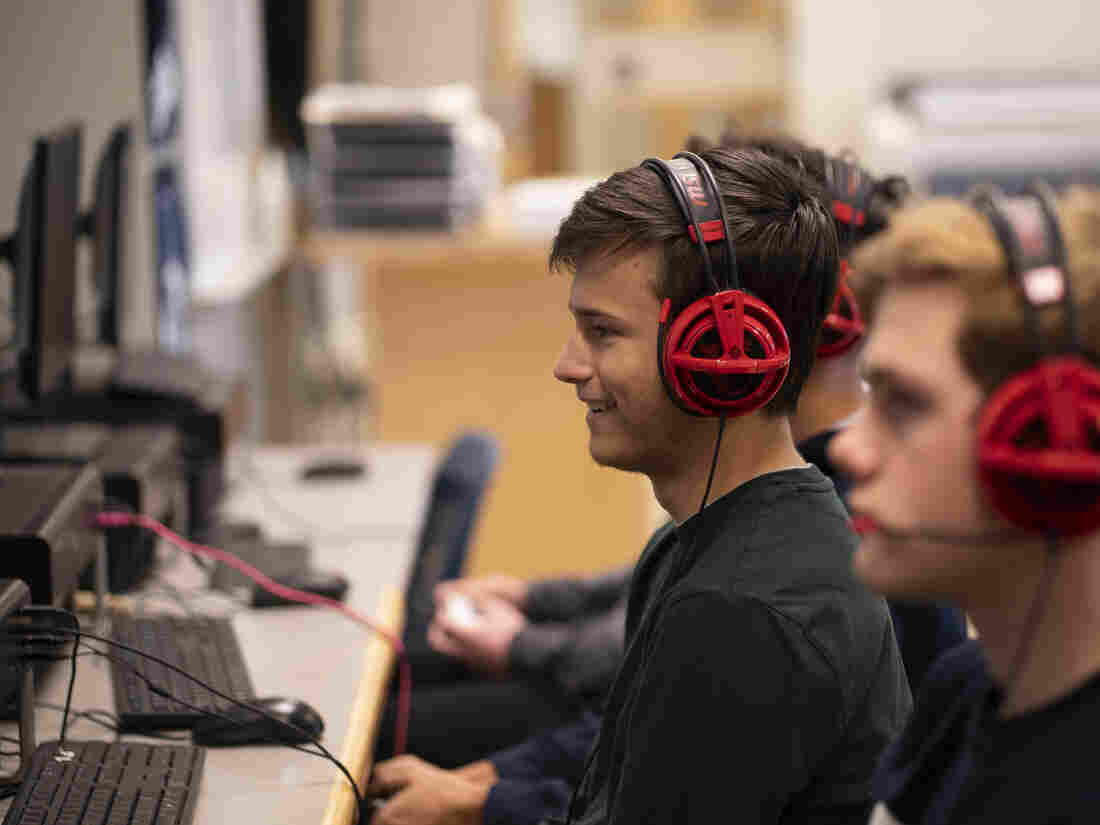 Scooter Norton, captain of the Washington-Liberty High School's Rocket League team, says before the team was playing to improve, but now they have a goal in mind. Kisha Ravi/NPR hide caption 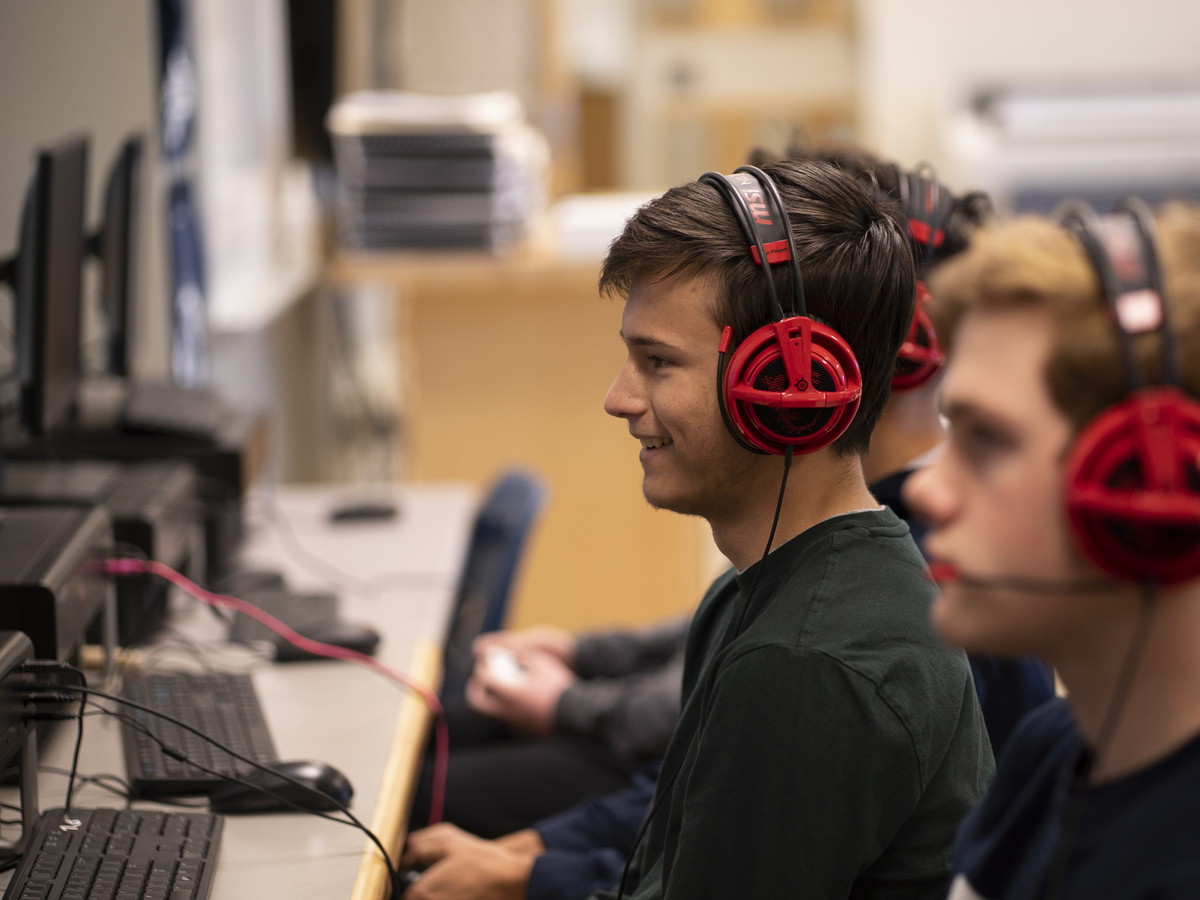 Scooter Norton, captain of the Washington-Liberty High School's Rocket League team, says before the team was playing to improve, but now they have a goal in mind.

"It makes a difference not just for the parents but also for the kids," says Perera. "It's something they're aiming for. There's goals here for school pride."

And Norton says he's noticed a difference too.

"We've taken a different approach now that we are playing in a league," says Norton. "We've started actually practicing rather than just getting on and playing for a couple of hours. We're starting to implement different types of drills, different things for us to focus on, that will help us improve as a team faster than just playing the game would."

Before, says Norton, they were playing to improve, but not with a set goal in mind. Now, with the league, their practices are more targeted and their goals are clear.

And despite the pressure of competition and the desire to win, all three players say their time spent playing Rocket League hasn't increased since the league started. If anything, they might play slightly less.

Miles Carey is an assistant principal at Washington-Liberty. He coaches the school's League of Legends Team and oversees the esports program at large.

"When the state says this is academically valid and we want to support it, I have to do a lot less explaining," says Carey.

Carey started the school's gaming club three years ago. Since then he's seen the benefits of allowing students to practice the games they're already playing in a structured environment.

"If a kid is playing basketball 10 hours a week in the park, why not give them a structured environment to play it," Carey says. "I think it is great for kids to take something they are already passionate about, make it a way to connect with the school and learn more from it."

Carey says when it comes to the benefits of playing esports there's a lot of overlap with traditional sports.

Students learn teamwork and communication. How to handle stress and overcome failure. They work to balance time spent playing their sport against other commitments.

Carey says his students are more comfortable with technology. Some of them have even learned how to build their own computers in pursuit of having the best gaming machine. 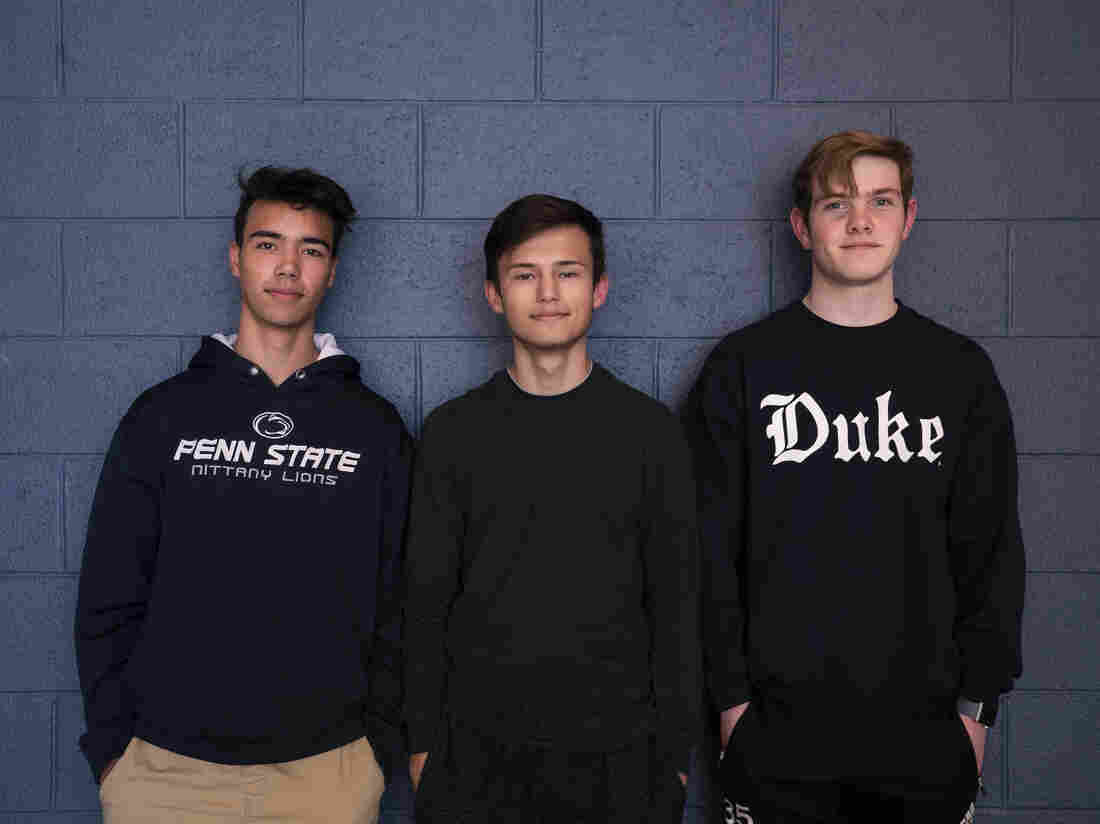 Matthew Goodwin (left), Scooter Norton and Calvin Forinash have been playing Rocket League for three years and have known one another since kindergarten. Kisha Ravi/NPR hide caption 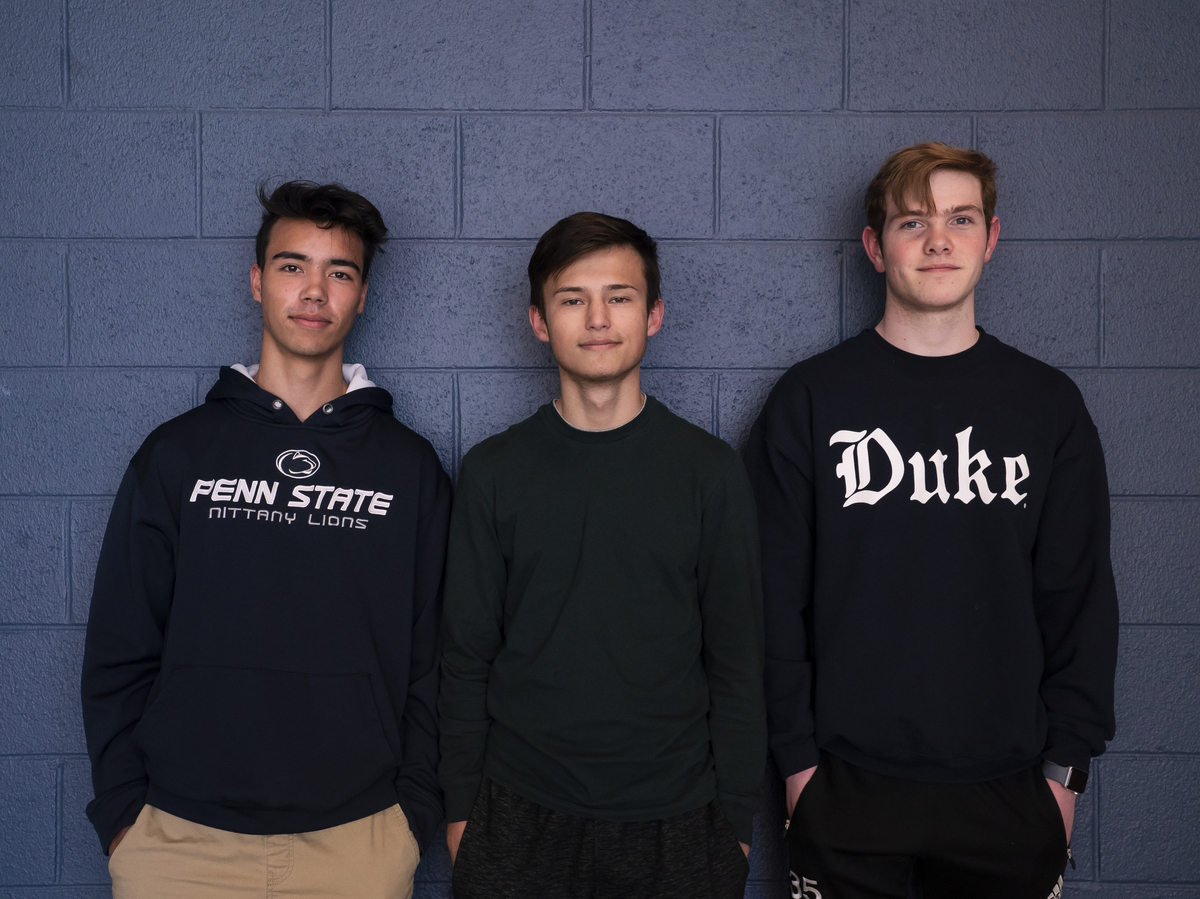 Matthew Goodwin (left), Scooter Norton and Calvin Forinash have been playing Rocket League for three years and have known one another since kindergarten.

And while the majority of students who play esports at Washington-Liberty are involved in another school sponsored activity, a third of them are not.

The success of high school esports is dependent on the accessibility of necessary technology.

PlayVS, which launched in April 2018, provides and manages the technical platform that allows high schools in the United States to create esports teams and participate in leagues with neighboring schools.

It costs $64 per student, per league, per season. Sometimes this fee is paid by the student's parent or guardian, other times schools have enough money set aside to cover the cost themselves.

The software allows the teams to battle remotely. In the digital age, this may seem unsurprising, but in the early 2000s, to compete against one another, gamers had to physically wire their computers together. This meant dragging your computer to a local area network, or an LAN.

Today, LANs are still considered the purest form of esports competition, since players are in the same location, eliminating the possibility of lag due to distance. But, thanks to new software, like that provided by PlayVS, high school players can verse opponents from across the state in real time.

And by partnering with game publishers, PlayVS is able to pull data from matches and track player performance.

These tools are important to coaches, but also to recruiters, looking to attract talented esports players to top universities and colleges.

"There was an opportunity to actually engage them in a competition where the incentive could be something that's meaningful to them at that stage in their life, which a high school championship is within your state," says PlayVS CEO and founder Delane Parnell.

And while the platform does provide the necessary tools for students to get recruited by colleges and maybe, one day go pro, Parnell says when he created PlayVS, he was mostly thinking about the kids that simply play for fun.

"I don't think of any of us think that we're gonna go pro and I think it's good for us to realize that so that we don't accidentally put too much time into it and not end up getting anything out of it," he says. "We understand enough about what we can do with this that we are putting in a relatively healthy amount of time, to the point where we can still do other stuff, but still enjoy the game as well."

But even if they don't go pro, esports presents other professional opportunities.

Jason Chung, an assistant professor of Esports Management and executive director of Esports at the University of New Haven's College of Business, says that as the industry continues to grow there are plenty of other ways to be involved.

He says the professionalization of the industry has also helped erode negative gaming stereotypes. Esports has shown that gaming doesn't have to be solitary and instead can be incredibly communal.

It has also pushed back against the idea of all gamers as individuals who are physically unfit.

"I think in a certain way there has been some truth to the narrative, in terms of the stereotypes of gamers, as chugging Mountain Dew and eating Doritos in a basement. That was a stereotype for a reason," says Chung.

But, he says that is largely no longer the case.

"I think the thing that's changed now in the professional space is that they're realizing that just having screen time and training, is not sufficient," says Chung. "You need to do other things to make the athletes healthy all around."

While Chung believes that esports belong in high schools, he believes that politicians and administrators need to take a bigger role to regulate esports before it gets too big. 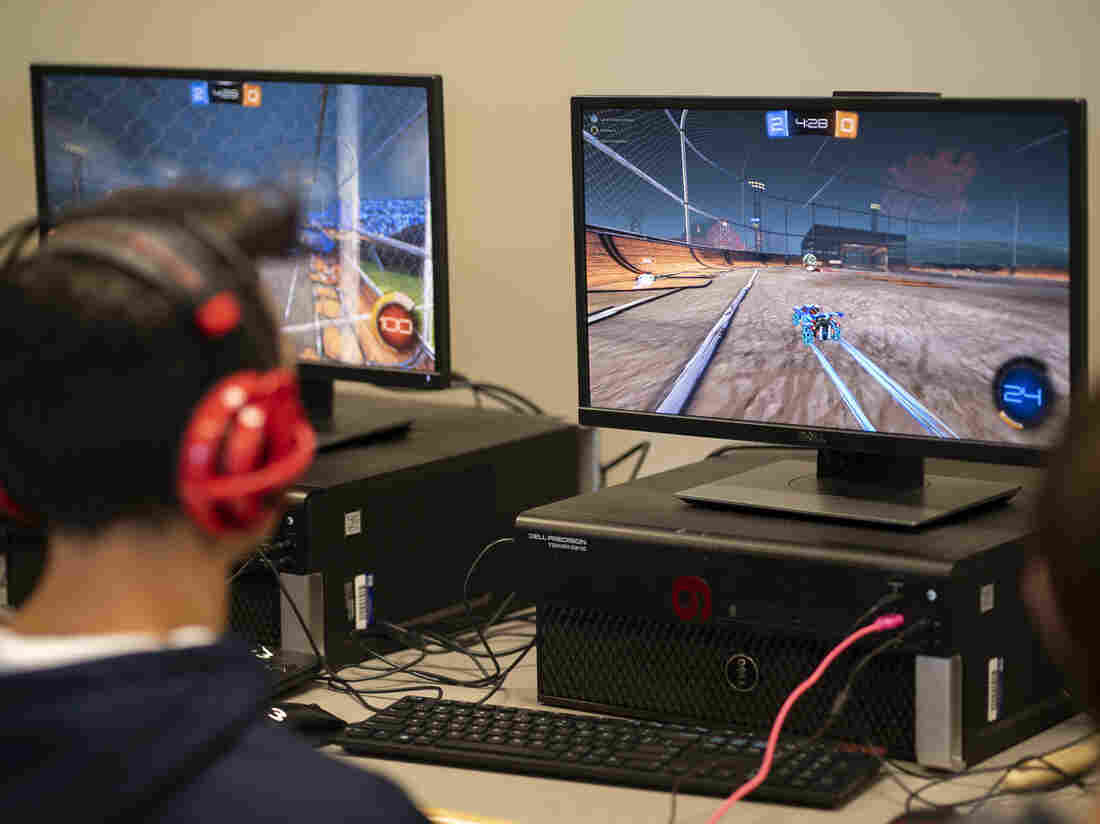 Much like traditional sports, students learn communication, how to handle stress and overcome failure through esports. Kisha Ravi/NPR hide caption 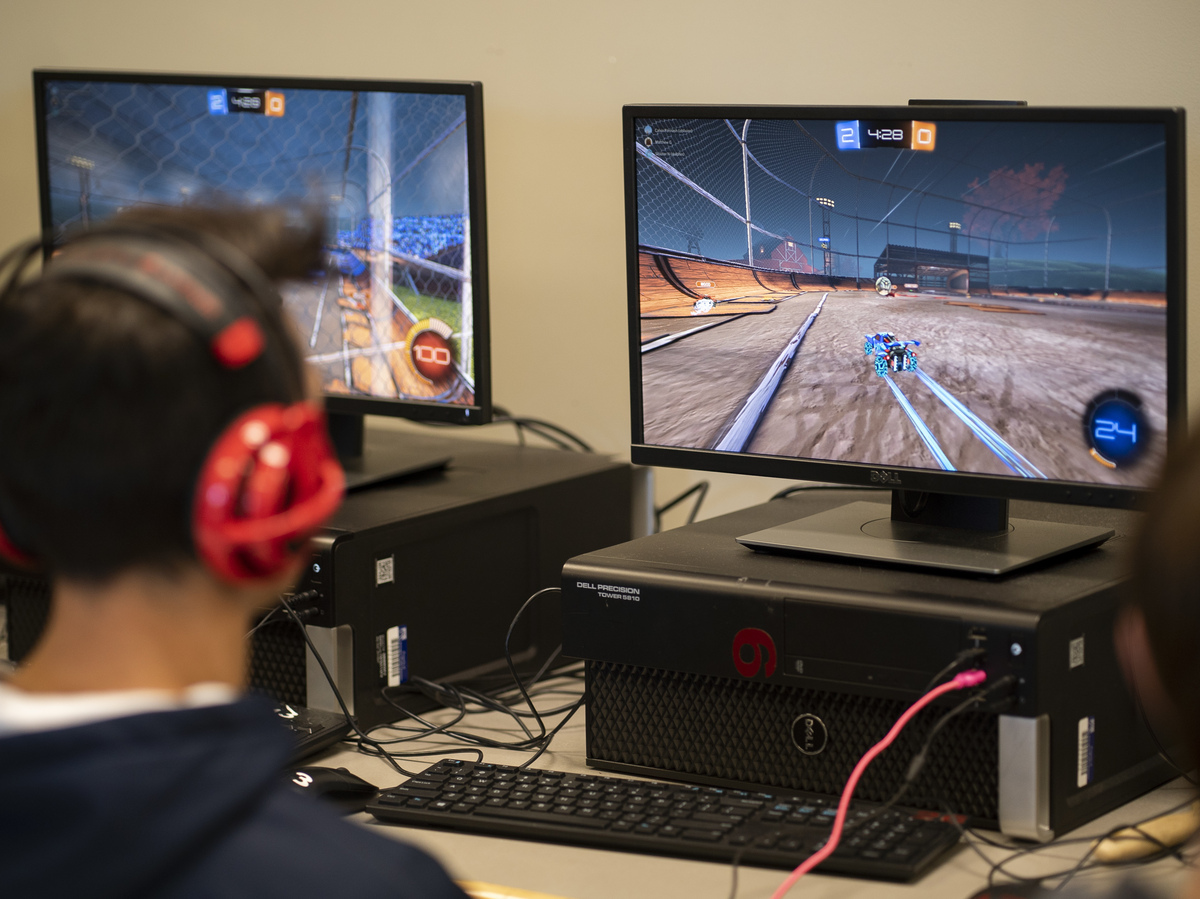 Much like traditional sports, students learn communication, how to handle stress and overcome failure through esports.

"I'd like to see is a little bit more leadership by state and local actors and hopefully with some federal coordination to really outline what principles and what sort of values they want to instill [through esports]," Chung says. "What are some of the physical fitness requirements you want to actually put in there? Because ultimately, whether it's a sport or a tech product or whatever it is, if we're going to have high school age kids play it, you want to have some sort of healthy mindset in there."

Parnell thinks that PlayVS's partnership with local high schools is a step in the right direction and helps prevent players from getting burned out too early or from developing "toxic behavior."

"I think what makes this more sustainable overall is that we're actually providing a structured environment for kids to play video games, which they would otherwise do unstructured," Parnell says. "We've implemented a coach, which is an adult in the room and that is super important."

This year Virginia is piloting their esports league. If enough students are interested and funds are available they'll offer it again next year, if not, then it's game over.