Accessibility links
Lawmakers Pitch Their Case Inside And Outside Senate Impeachment Trial There is extensive coverage of the arguments both sides are making to 100 Senate jurors. But prosecution and defense teams are also echoing those messages outside the chamber to appeal to the public. 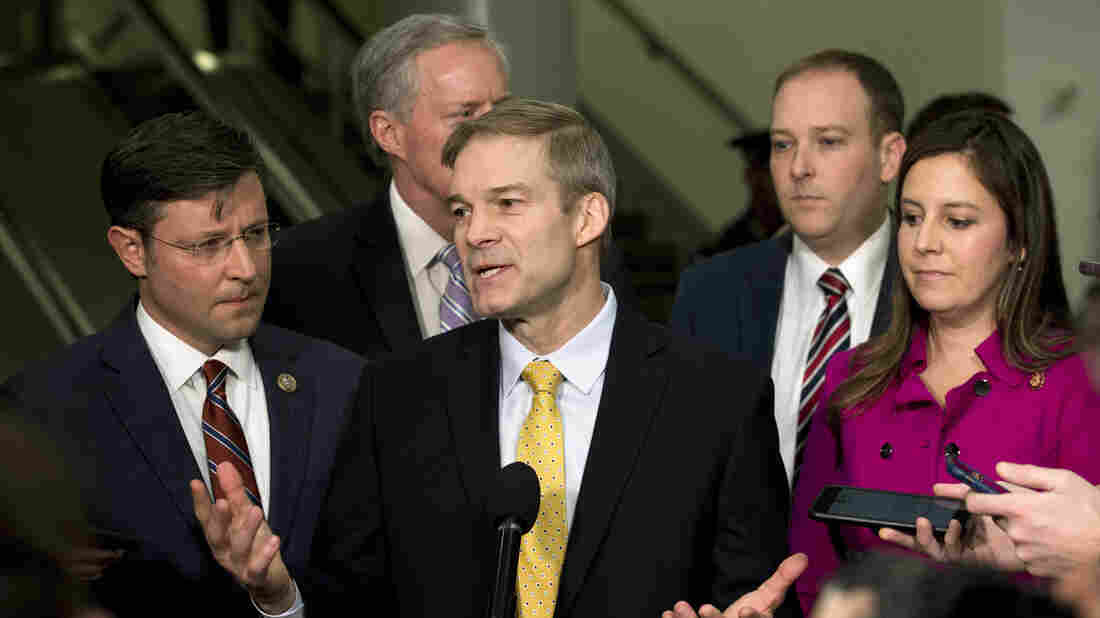 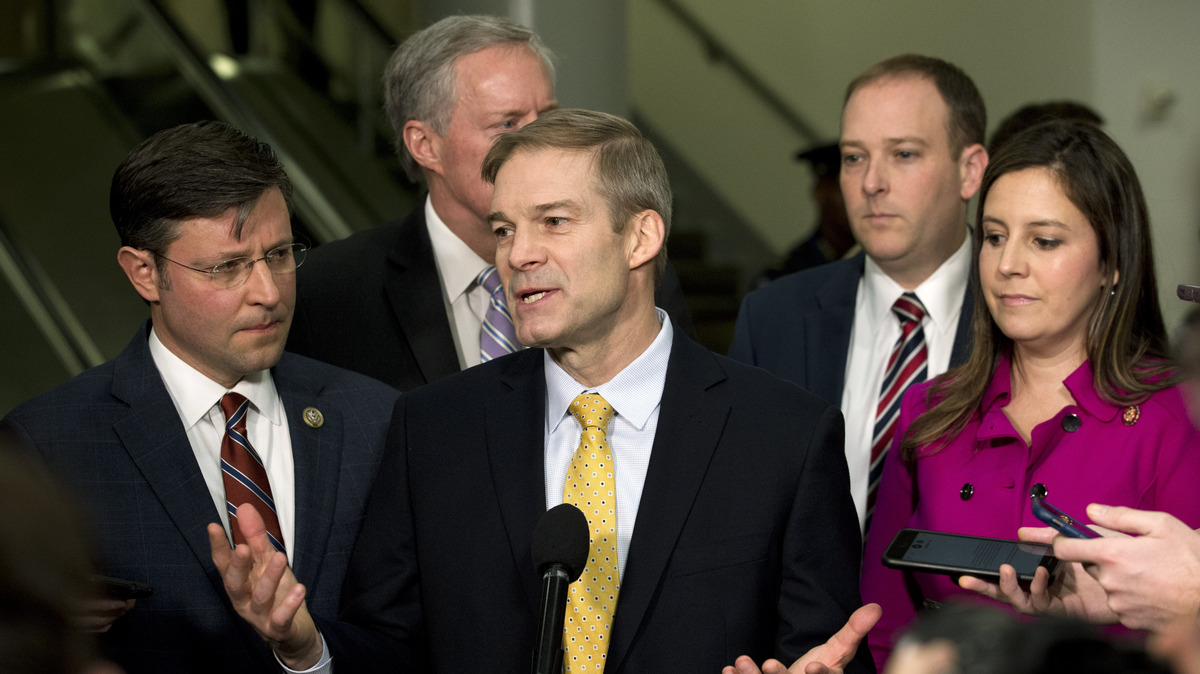 It's not just the prosecutors who are approaching the Senate trial as having two distinct audiences.

Both the managers and the president's defense team have set up messaging operations to repeat their cases for and against impeachment. They know senators are required to listen in the chamber. But the public is also digesting the arguments and catching up on what they missed when they tune in to press coverage online and on air on their favorite media outlets.

Both sides recognize they have limited opportunities to insert themselves into the regular and fast-moving press reports. Most outlets are carrying wall-to-wall coverage of the extended debate on the Senate floor. But every time there is a short recess or dinner break, the teams head straight to the Senate studio upstairs for press conferences or the stakeout camera set up in the Capitol basement to weigh in on the latest developments.

To those listening to what are typically back-to-back assessments from Republicans and Democrats, it can feel as though they are watching completely different trials.

Getting the message out to multiple outlets

Before the trial session day begins around 1 p.m. ET each day, the action outside the Senate chamber and on cable news is in full swing.

News programs feature interviews with House impeachment managers and House Republicans who were added to the president's defense team. While they aren't designated to be part of the team with Senate floor privileges, this group of roughly half a dozen lawmakers is a regular presence in the hallways and on news programs.

Rep. Jim Jordan, R-Ohio, pushed back on Schiff's presentation Thursday on NPR's Here and Now. He took issue — as he did during the House hearings — with the Democrats' case that the president leveraged security assistance to Ukraine to extract a commitment that the government would investigate his political rival.

It's not just traditional news channels where lawmakers are pitching their case – Florida Democratic Rep. Val Demings, one of the House managers, appeared on The View, a popular talk show aimed at women, on Wednesday.

I am hoping that every Senator will remember the oath that they have taken, and take it very seriously.

The American people deserve to see a fair trial, and we are going to do everything on our side to make sure they get one.

Thank you to @TheView for having me on this morning! pic.twitter.com/YdiFeKjXuY

Senate Minority Leader Chuck Schumer, D-N.Y., failed to get any of his proposed amendments to allow additional witnesses or documents during the lengthy debate on the rules earlier this week. He's not allowed to talk on the Senate floor during the trial, but he holds regular pre-session press conferences to stress what he believes are the key points of the prosecutors.

Schumer also makes regular appeals to the small group of Senate Republicans who are considering whether they will break from their leaders and vote with Democrats to subpoena witnesses, such as former national security adviser John Bolton, who declined to appear as part of the House investigation.

"Every day, more and more of the public is watching," Schumer said Thursday. He pointed to a new public opinion poll that showed support for additional witnesses and documents. He predicted the coverage of the arguments "will have an effect on senators."

Sen. Bob Casey, D-Pa., joined Schumer on Thursday to stress what he saw as the most compelling evidence, pointing to some of the video clips the managers used to showcase witness testimony from the House hearings. He called the record from the managers "substantial" and "compelling" and maintained that "you can see the power of this case and how disturbing it is."

But so far there's little evidence that the Democrats' efforts are having much impact on the small group of moderate Senate Republicans who have expressed some openness to hearing from witnesses.

Defense team rebutting prosecutors ahead of their formal presentations 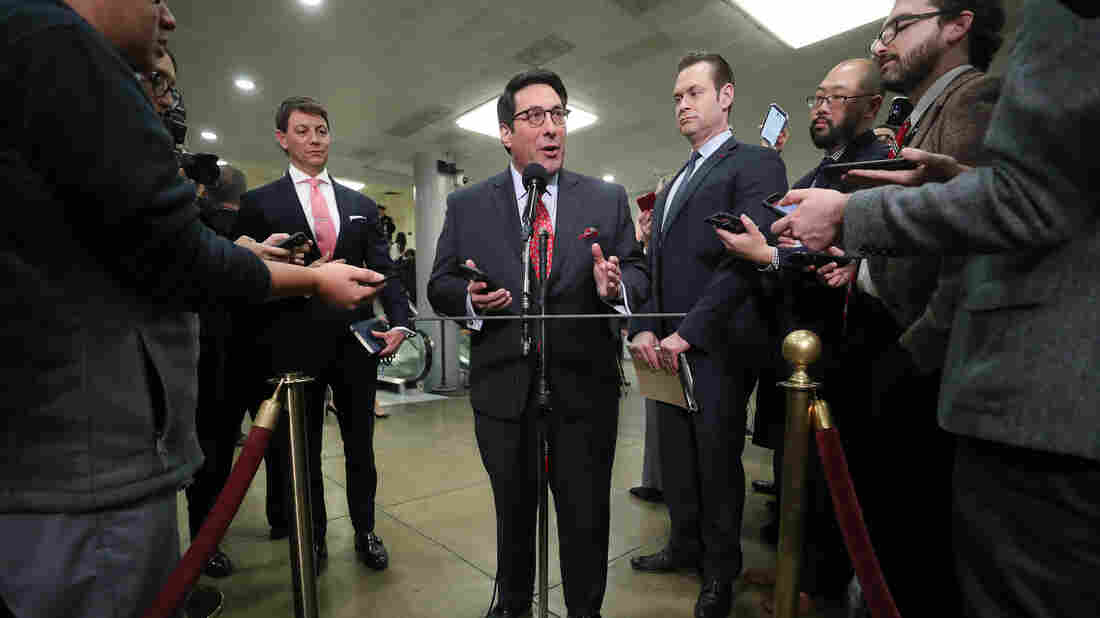 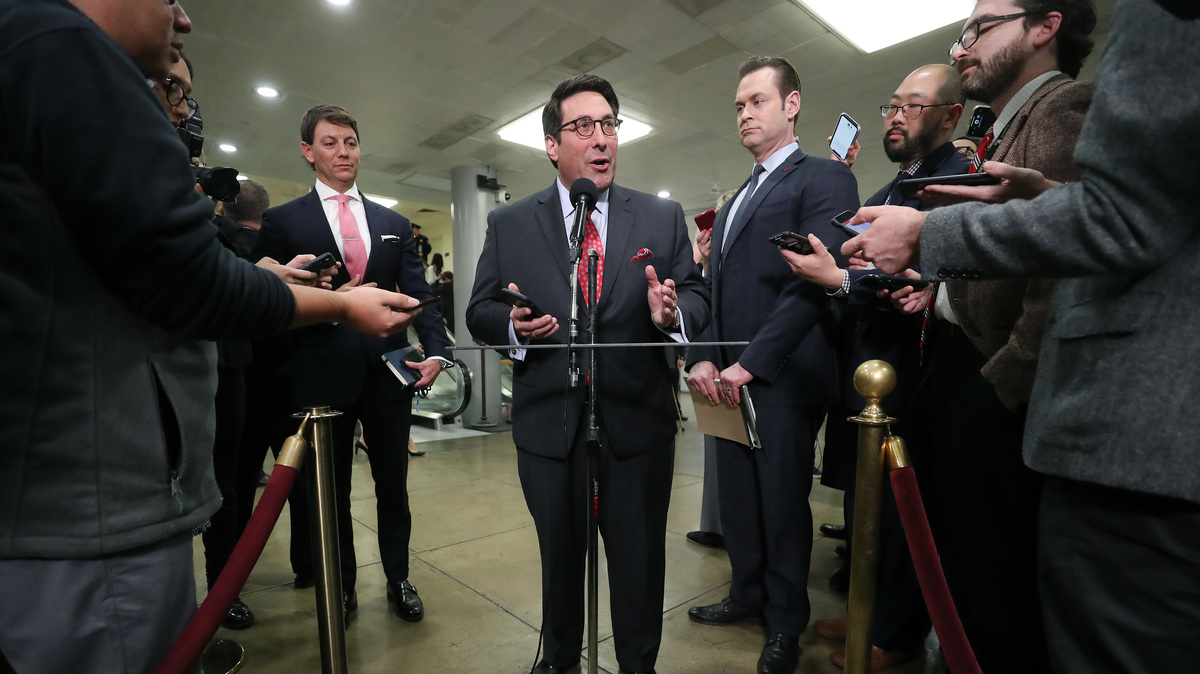 The president's defense team isn't slated to start presenting its case opposing impeachment until Saturday. But Jay Sekulow, President Trump's private attorney and a member of the defense team, has been a leading public voice during breaks. He's been rebutting some of the managers' arguments and giving tidbits about his own legal strategy — saying he plans to outline his case in "two parts."

During most of his stops at the camera where reporters congregate and throw him questions, he maintains that Schiff and his team haven't revealed any new information. He predicted on Thursday after almost two full days of arguments: "I am confident that whether it is Saturday or Monday or Tuesday that the case will be made defending the president."

Press restrictions in and around the Senate chamber make it difficult for reporters to get access to the moderate Senate Republicans like Maine Sen. Susan Collins and Alaska Sen. Lisa Murkowski, who could be part of some sort of deal on possible witnesses. They are keeping their opinions about the arguments mostly to themselves.

But other Senate Republicans who are reliable defenders of the president regularly come out to weigh in on what they are hearing on the Senate floor.

The most frequent complaint so far is that they keep hearing the same stories over and over again.

"My frustration is the American people are getting half the story at this point," Sen. James Lankford, R-Okla., said, sounding impatient to get to the next phase of the trial.

Vice President Pence is also part of the messaging effort. He did an interview on the Christian Broadcasting Network and made the case that even those Senate Republicans who might be undecided on their votes in the trial will be convinced the president did nothing wrong.

"They'll see this partisan impeachment for what it is. There's not even a crime that is alleged, let alone a high crime or misdemeanor or treason or bribery and they'll reject this, these two articles and acquit the president and allow our country to focus back on the issues that matter most and frankly, focus on the election that is just 10 months away," Pence told CBN's David Brody.

Republican senators also know that President Trump is watching the coverage of the Senate trial. One of his closest allies — South Carolina Sen. Lindsey Graham — took the opportunity to relay a message through reporters covering the debate on Thursday.

Asked about the president considering appearing at the trial in person, Graham replied, "He hasn't told me whether or not he wants to come. But in case you're listening, don't come."

Lexie Schapitl contributed to this report.