Accessibility links
President Trump Addresses Anti-Abortion Rights March For Life Trump has addressed the annual march remotely before, but Friday marked the first time a sitting president has spoken in person at the anti-abortion rights event. 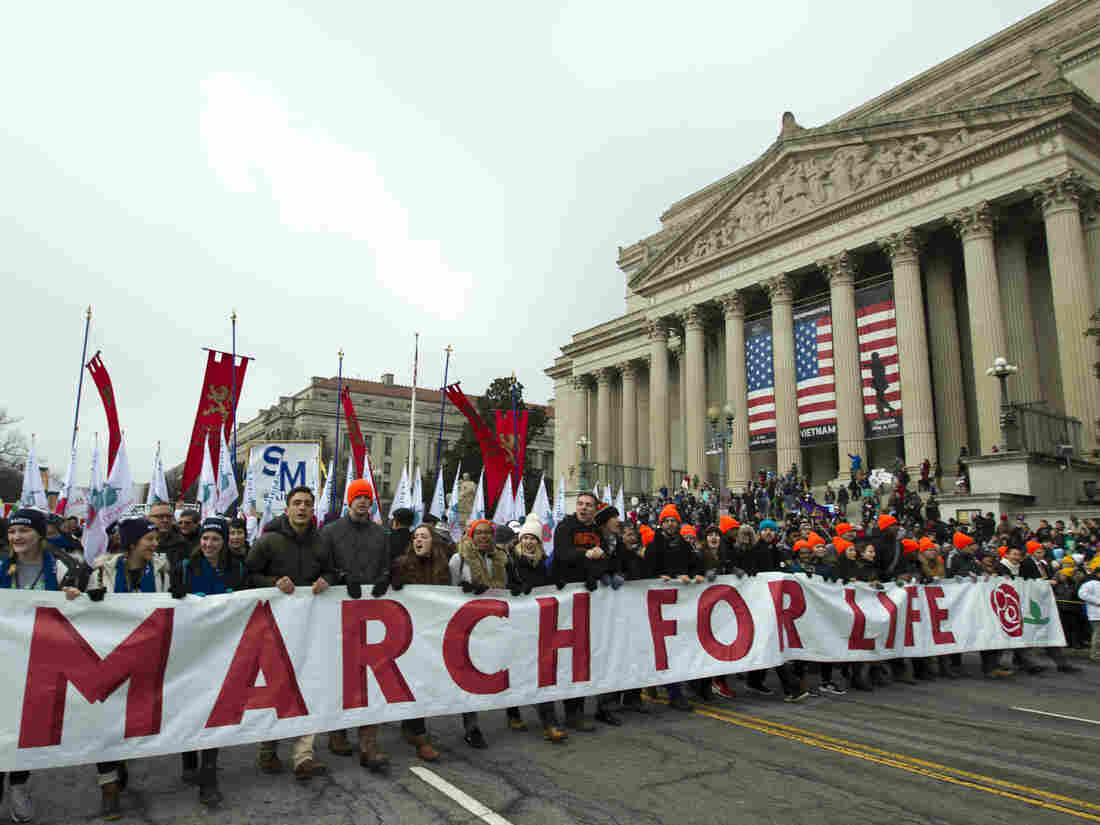 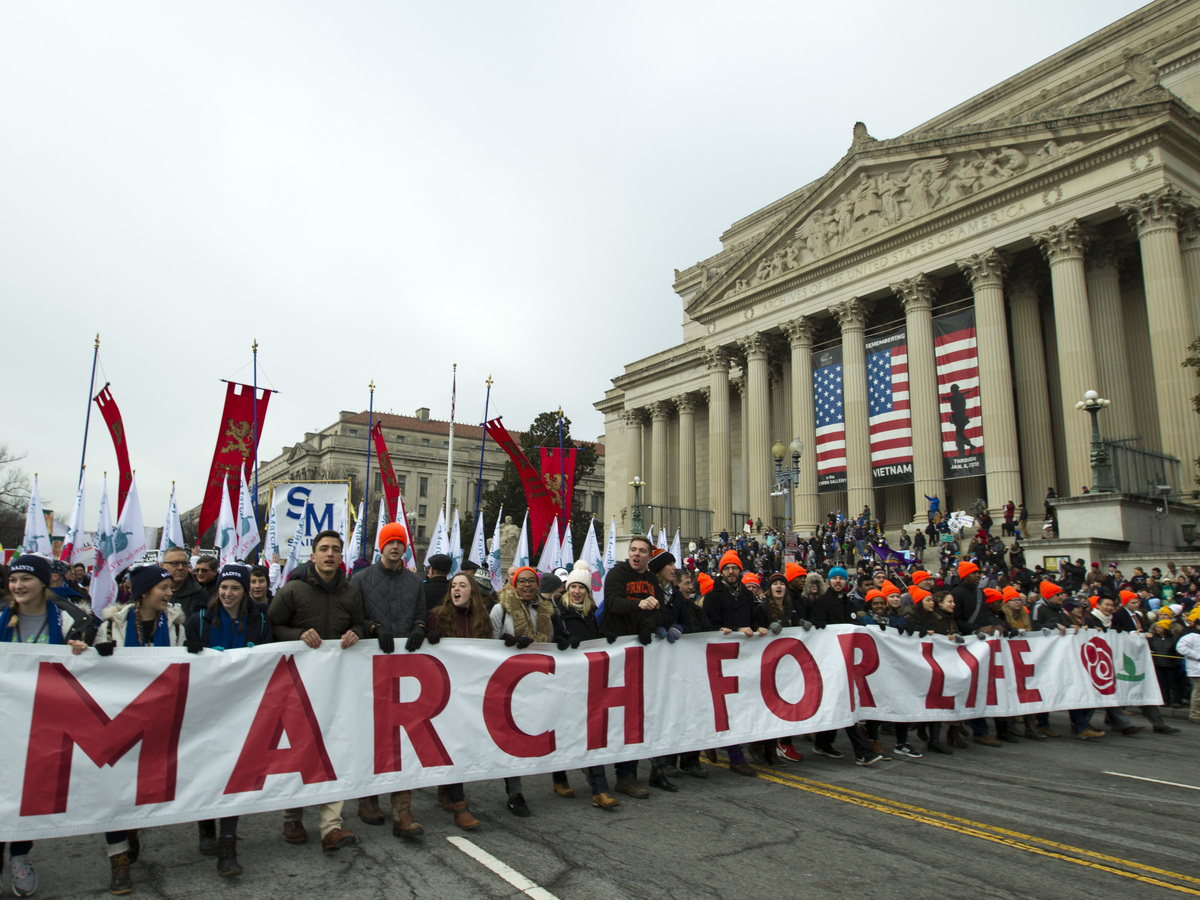 Anti-abortion rights activists march toward the U.S. Supreme Court during the 2019 March for Life in Washington, D.C. President Trump spoke at this year's rally on Friday.

As thousands of anti-abortion rights activists prepared to march in Washington, D.C., on Friday, President Trump was there to rally his base.

"They are coming after me, because I am fighting for you," Trump told the crowd, without directly mentioning the impeachment trial underway in the Senate. "And we are fighting for those who have no voice."

"And we will win," Trump added, "because we know how to win."

It was the first time a sitting president delivered an address in person at the March for Life, an annual event organized decades ago in response to the 1973 Roe v. Wade decision that legalized abortion nationwide.

Trump's appearance before thousands of mostly supportive anti-abortion rights activists comes at a key moment — during the impeachment trial, and just months to go before the 2020 election.

Trump has leaned in to his connection to religious and social conservatives, frequently praising "the evangelicals" who make up a key portion of his base and courting anti-abortion rights groups such as the Susan B. Anthony List.

At the march, that group's president, Marjorie Dannenfelser, made an explicit plea for support for Trump, calling the 2020 election "the most consequential election of our lifetimes for the cause of the unborn."

"We have seen historic gains under this President. You heard what his heart his and what his track record is," Dannefelser said.

She added, "But now it's time to go for the win," calling for the overturning of Roe v. Wade and for passage of federal legislation restricting abortion.

In an interview with NPR ahead of the march, Dannenfelser called Trump's appearance at the march "a moment of celebration for the pro-life movement." She said it's a reminder of how far Trump has come in the minds of some conservatives who were initially skeptical because of his past support for abortion rights.

"Everyone doubted where he was on the abortion issue. He stated what he believed. There were doubts all over — I mean, I was one of them," Dannenfelser said. "So he's actually become the person that he says he is."

Dannenfelser said she is pleased with Trump's appointment of conservative federal judges — most notably to the Supreme Court. Just this week, the Trump administration signed off on federal funding for a family planning program in Texas that excludes groups like Planned Parenthood that provide abortion services.

Several marchers told NPR that while they have had some misgivings about Trump, they are pleased with his record on issues including abortion.

"He's a little rough around the edges, but he stands for the things that I believe in, and that's why I voted for him," said Ermida Arocho of Chicago.

June Matson, who runs a crisis pregnancy center in Granby, Colorado where women are counseled against abortion, alluded to Trump's history of once expressing support for abortions rights.

"Whether he was pro-life before or not, it doesn't really matter, because he has continued to prove that he will vote pro-life," Matson said.

Trump's appearance wasn't entirely unprecedented: Two years ago, he spoke live via video feed from the White House Rose Garden, telling that marchers, "you love every child, born and unborn, because you believe that every life is sacred, that every child is a precious gift from God."

Other Republican presidents — Ronald Reagan, George H.W. Bush and George W. Bush — have addressed the crowd remotely, via phone call or prepared statement. Some observers have speculated that such a move allowed those presidents to court anti-abortion rights voters without subjecting themselves to a photo-op in front of the crowd, out of fear of turning off more moderate voters.

The Trump administration took the occasion to announce an action aimed at appealing to anti-abortion voters; the U.S. Department of Health and Human Services told California that a law requiring insurance companies to include abortion coverage in all healthcare plans violates federal law, and gave the state 30 days to rescind it.

California Attorney General Xavier Becerra said on twitter that the president is "sowing division for cheap political gain," and pledged to fight to preserve the law.

Make no mistake, this attack on California is just one more attempt to chip away at reproductive rights and access to abortion.

We will fight this by any means necessary. #ExpandNotBan https://t.co/xuzwQJOpsb

In an interview with NPR, Planned Parenthood's acting president and CEO, Alexis McGill Johnson, said Trump's appearance at the event is "no surprise" given his policy record.

"This is just confirmation that we have a sitting president of the United States who is determined to do whatever he can to end people's ability to access abortion," McGill Johnson said.

Advocates on both sides of the abortion debate see much at stake in the 2020 election. After Trump's address, activists at the rally will march from the National Mall to the U.S. Supreme Court — where just weeks from now, the court is set to take up its first major abortion case since Trump's two conservatives nominees, Justices Neil Gorsuch and Brett Kavanaugh, joined the bench.

Those two justices alone have moved the court to the right, setting up the possibility that Roe could be overturned or substantially eroded. And whoever is elected in November may have the opportunity to name at least one more justice to the court.