Accessibility links
Houston Explosion: At Least 2 People Killed In Massive Industrial Blast The blast was felt more than 30 miles away, knocking homes off their foundations and casting debris about half a mile. A criminal probe is underway, though it's not clear what caused the explosion. 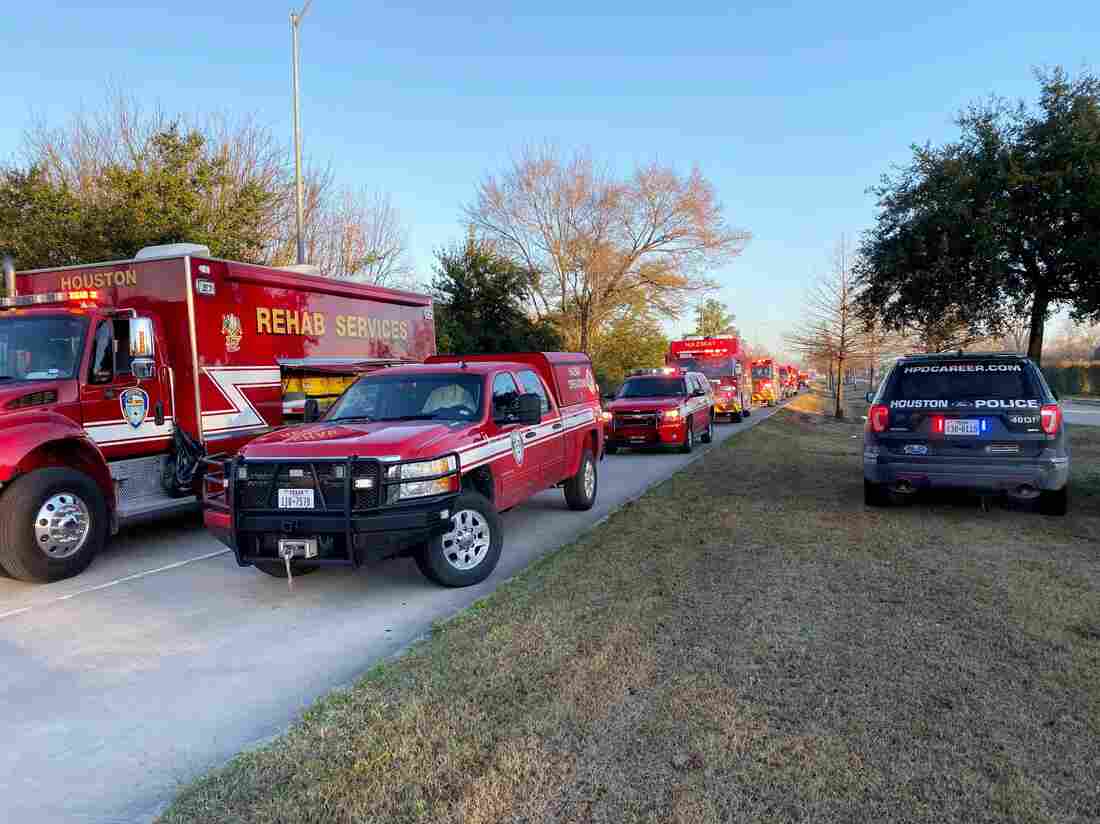 Emergency personnel work the scene of the early morning explosion that Houston Fire Chief Samuel Peña said caused significant damage to nearby homes and even knocked some off their foundations. Collin Eaton/Reuters hide caption 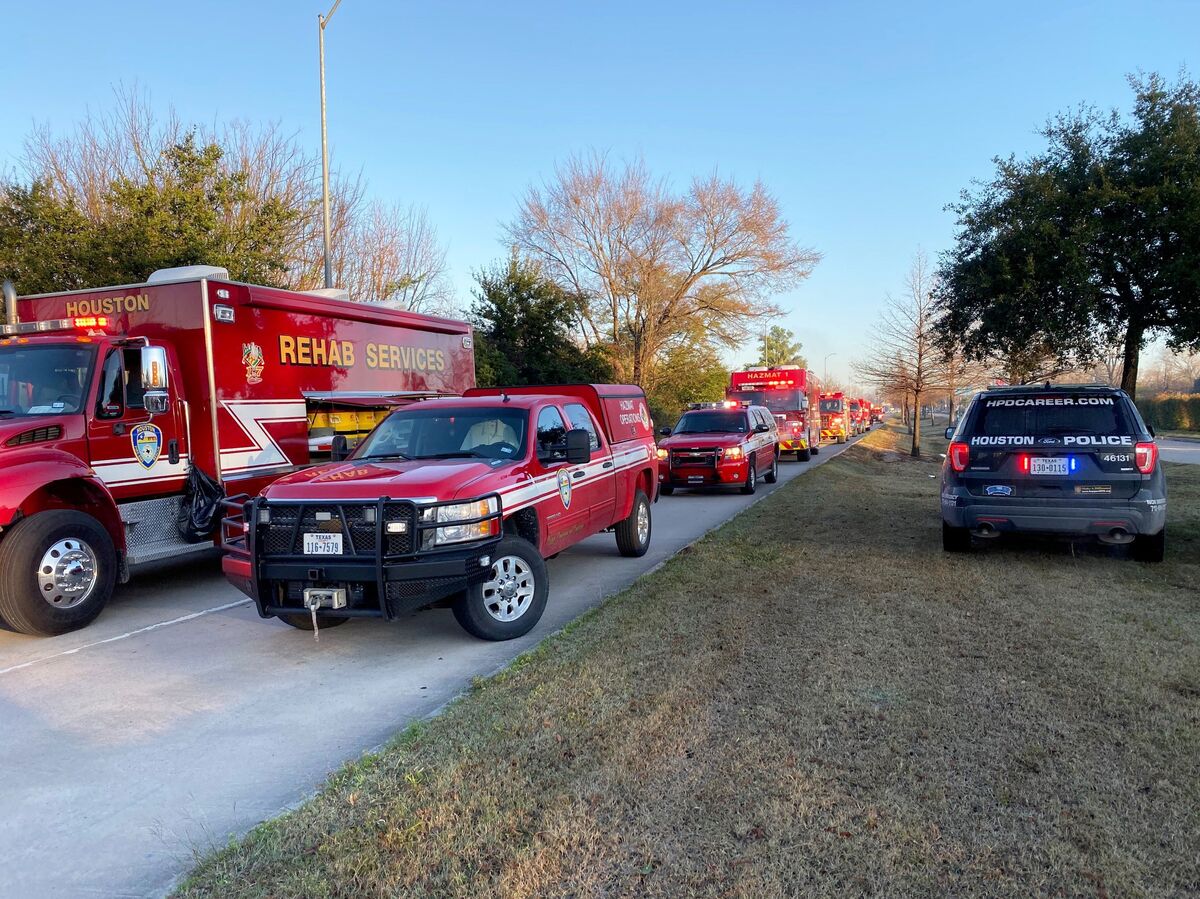 Emergency personnel work the scene of the early morning explosion that Houston Fire Chief Samuel Peña said caused significant damage to nearby homes and even knocked some off their foundations.

A massive industrial explosion in northwest Houston early Friday killed two people, left a business in ruins, knocked homes off their foundations and sent debris flying for about half a mile.

The predawn blast at a building belonging to Watson Grinding and Manufacturing, which provides industrial services such as thermal spray coatings, could be felt more than 30 miles away, Houston Police Chief Art Acevedo said at a news conference.

Acevedo said it's not clear whether the victims were employees. He said authorities have opened a criminal investigation into the incident but that there was currently no reason to think the explosion was intentional.

Friday's incident is just the latest in a string of industrial explosions in Texas' Gulf Coast region, which houses numerous chemical facilities.

It's not yet clear what caused the explosion, which jolted the area at about 4:30 a.m. local time.

"Multiple buildings and homes had their windows broken in and doors blown off their hinges," Houston Public Media's Davis Land reported.

"[The explosion] knocked us all out of our bed, it was so strong," resident Mark Brady told Click2Houston. "It busted out every window in our house. It busted everybody's garage door in around here ... and closer toward the explosion over here, it busted people's roofs in and walls in and we don't know what it is. ... It's a warzone over here."

One resident told the local news station that her roof of her home collapsed. "The whole house is ruined," she said. "The whole ceiling crashed down on all of us. We were all trapped in there and a nice family came and helped us out. ... It's just trashed."

The moment of the explosion was caught on video by a doorbell surveillance camera, which shows a bright ball of fire light up the sky.

Authorities initially were concerned because valves on propylene tanks at the site were releasing the colorless and highly flammable gas into the air, but Houston Fire Chief Samuel Peña said the leak has since been contained. A small, contained area at the Watson Grinding and Manufacturing site was still on fire, he said, adding that fire officials have decided to let it burn out on its own.

"This is going to be a long-term incident. We're going to be out here for several days," Peña said. He encouraged residents who find debris in their yards or on their roofs to call authorities.

"We've actually had to get some of our employees to bring in their own personal drones to actually start looking at rooftops in the vicinity," Acevedo said. "We've started a grid search for evidence."

The police chief also warned against any attempt to loot homes in the area. "This is, in essence, a disaster area right now," he said. "Word to the wise — do not get caught looting because it will not be a slap on the wrist."

On Friday afternoon, a law firm that says it represents multiple families whose homes were damaged filed a request for a temporary restraining order against Watson Grinding and Manufacturing so that any evidence at the blast site is preserved.

Houston authorities were setting up an evacuation center for residents who need to leave their homes because of damage.

Fire and police officials had initially recommended that families leave the area, though they later urged residents to shelter in place. The fire department said 48 people have taken shelter at a church, as the Red Cross works to find an overnight shelter for them.

A local school district, Cypress-Fairbanks, said it was closing two schools near the blast site on Friday. Several school districts have said they plan to keep students indoors for the day. Nearby roads were being closed, and Acevedo said that would last into Saturday.

Hazmat teams are doing air quality assessments, though Peña stated: "We have no reports of accumulation or hazards to the air quality." The Texas Commission on Environmental Quality also said it has deployed staff to assist with those assessments at the scene.

"While not all emergency events may be prevented, it is imperative that industry be accountable and held to the highest standard of compliance to ensure the safety of the state's citizens and the protection of the environment," he added.

In November, an explosion at a chemical plant in Port Neches, Texas, injured three people and damaged nearby homes. In July, more than 30 people were treated for minor injuries after a fire at an Exxon Mobil refinery in Baytown, Texas.

And early last year, as Houston Public Media's Florian Martin reported, three chemical fires — one of them deadly — hit the Houston area in the span of a month.

A Houston Chronicle investigation in 2016 found that 12 petrochemical explosions, fires or toxic releases had happened in the Houston area between November 2014 and May 2016.