Accessibility links
Interview: Marcia Chatelain, Author Of 'Franchise: The Golden Arches In Black America' History professor Marcia Chatelain's new book tracks what she calls the hidden history of the relationships between the struggle for civil rights and the expansion of the fast food industry. 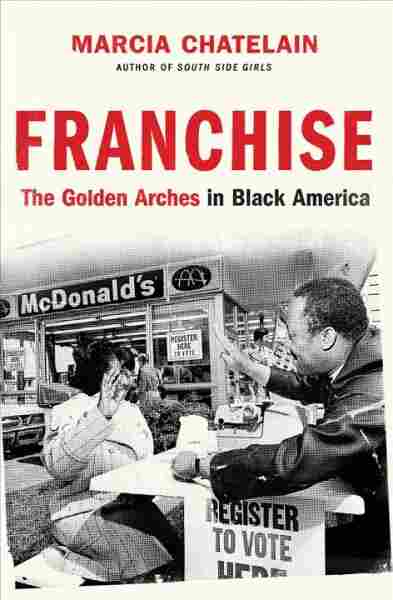 The Golden Arches in Black America

Let's talk about fast food — and I bet you have a jingle in your head right now, because according to a new book, on any given day in America, an estimated one third of all American adults is eating something at a fast food restaurant.

But fast food doesn't mean the same thing to everyone everywhere. For some, owning a franchise has been a path to wealth, but fast food restaurants are hyper-concentrated in some of the country's lowest-income and most segregated areas. And according to the Centers for Disease Control, African Americans are more likely to eat fast food than any other racial group in America — which is why fast food is also seen as the culprit for the high rates of obesity, diabetes and heart disease among black people.

So how did that happen? And is fast food the hero or the villain in black America? In her new book Franchise: The Golden Arches in Black America, history professor Marcia Chatelain traces what she calls the hidden history of the relationships between the struggle for civil rights and the expansion of the fast food industry.

Chatelain says that as a child, she constantly noticed that museums and cultural sites in her home town of Chicago had signs indicating they'd been sponsored by the local black McDonald's operators association. "And so this book really explores the relationship between black America and McDonald's, to help us understand where other parts of our society has failed, McDonald's has unfortunately had to pick up the slack."

McDonald's is a big part of this conversation, and we should mention here that the estate of Joan Kroc — the widow of McDonald's Corporation founder Ray Kroc — is among NPR's financial supporters.

On how come McDonald's franchises became so important to black owners

Ray Kroc was not a racial progressive, but what he was was a person who was very much committed to the expansion of McDonald's. And while he initially concentrated on expansion in the suburbs after the uprisings that followed Martin Luther King's assassination in 1968, the business community saw an opportunity, because there were deep demands for more commerce. The federal government was underwriting minority business initiatives that supported the growth of franchises. And even more importantly, the civil rights establishment started to pivot towards black capitalism as its priority. And those forces all came together to bring McDonald's to black America.

Well, 1968 is such a critical moment in the story, because I think we often forget about the impact of economic white flight in the inner city. We often focus on residential white flight and the impact on schools and tax bases. But many people left the inner city because they were afraid of future uprisings and they no longer wanted to deal with the questions of accountability that black consumers were making on them. And so as this exodus was happening, McDonald's saw an opportunity to install African American franchise owners in the abandoned stores. But they also saw the drop in the value of property in these neighborhoods, and their ability to expand at cheaper rates also helped with the expansion of their restaurants in this community.

Herman Petty represents, I think, a lot of the men who were early in African-American franchising. There were these men who had opportunities through military, some of them were college educated — but they all had to contend with the roadblock of discriminatory lending practices, so was hard to get bank loans. They wanted to create businesses in their community and see opportunities. And they also trusted black women to be able to execute and really do the hard work in the stores. And so while women had been kind of banished from McDonald's after the McDonald brothers really wanted to focus on mechanization and thought they were flirting and they would be too much of distraction, what Herman Petty understood was that these jobs were ideal places for black women who were trusted in the community and who could deliver on the incredibly demanding needs of a McDonald's franchise.

McDonald's provides us a prism for wondering why does McDonald's have to have such an important role in certain communities, and in others it can just be a place to eat? I think that for African Americans who chose franchising as the path forward, it's very easy for us to belittle them. But we know how this story ended, of the 1960s and the 1970s. I think what McDonald's has provided is an opportunity for some, at the expense of far too many ... not just the health effects; I think any time we have communities that have to rely on a business to be the place of refuge, to be the place for wifi, to be the sponsor of youth sports, to be the place where the youth job program happens, for the college scholarships to emanate from, then we have a problem.

This story was produced for radio by Janaya Williams and Tinbete Ermyas, and adapted for the Web by Petra Mayer