Accessibility links
'Our Democracy Is In Danger': Muslims In India Say Police Target Them With Violence Dozens of Indians, most of them Muslim, have been killed by police in weeks of nationwide protests against a new citizenship law. Their families believe they were singled out because of their faith. 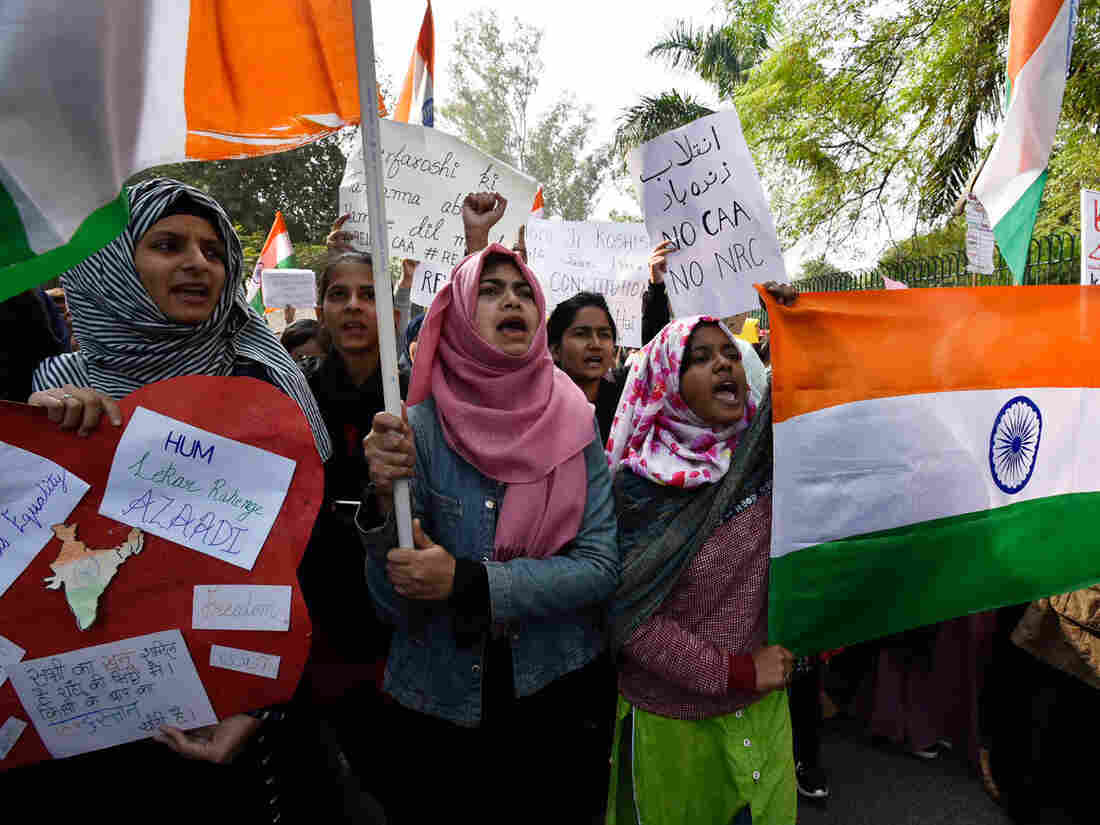 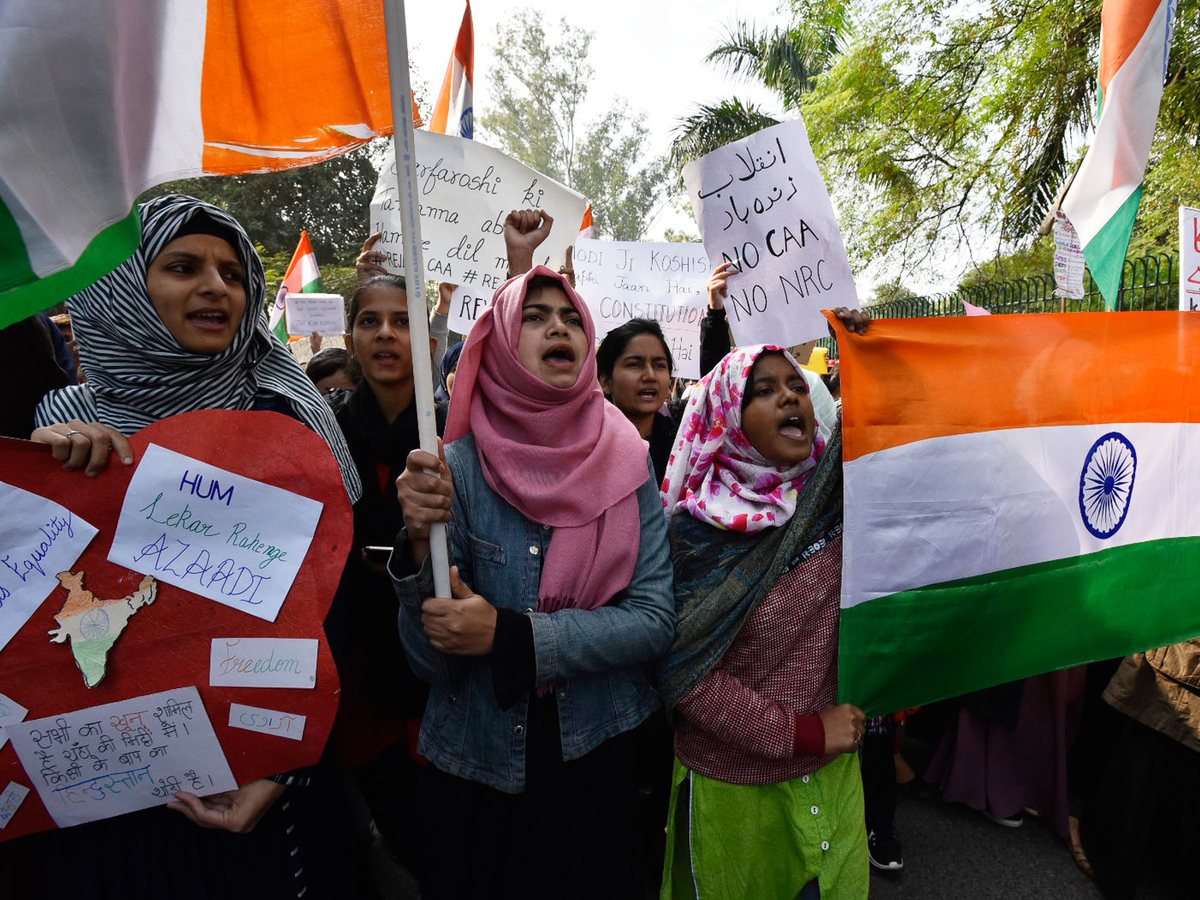 Demonstrators protest against the Citizenship Amendment Act near Jamia Millia Islamia on Dec. 15 in New Delhi.

When Aysha Renna decided last month to demonstrate against India's new citizenship law on her college campus in New Delhi, it never occurred to her that doing so might be dangerous.

Across India, students at other universities were organizing similar rallies against the Citizenship Amendment Act — a key policy of Prime Minister Narendra Modi's Hindu nationalist government. The law offers amnesty to undocumented migrants from three neighboring Muslim-majority countries — but only if they are non-Muslim. Critics say that by excluding Muslims, the law establishes a religious test for Indian citizenship, in violation of the secularism enshrined in India's constitution.

On Dec. 15, Renna and hundreds of her classmates were marching and waving protest banners on the campus of Jamia Millia Islamia, a historically Muslim university, when they came under attack by police. They had avoided a barricade and taken another route "because we wanted to make it a peaceful kind of thing," she recalls. "But what we saw next was complete brutality. Police started chasing the protesters and beating them up."

Video of those clashes went viral. In one, Renna, wearing a maroon headscarf, is seen screaming "Back off!" at police and wagging her finger at officers as they beat a male student with batons. More than 100 people were injured that day.

Renna, 22, has since become a familiar face in anti-government protests that have been raging across India for more than six weeks: a Muslim woman confronting Indian authorities, seen as a symbol of all students protesting the new law. 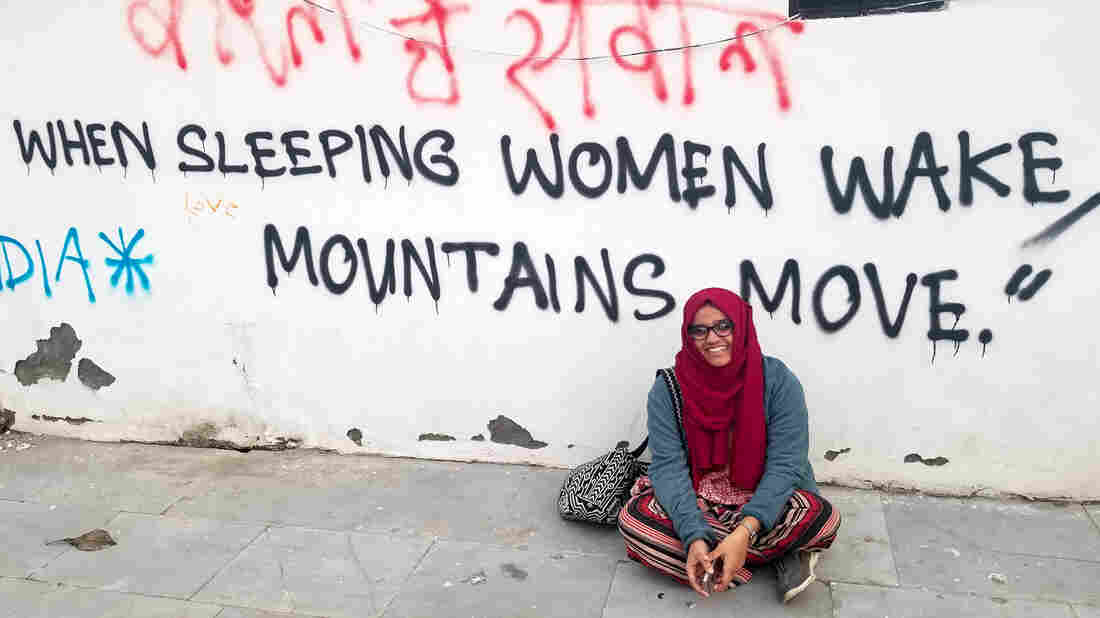 Aysha Renna, 22, a graduate student in history at Jamia Millia Islamia in New Delhi, sits in front of a wall with graffiti on campus. Video of Renna yelling at police as they beat her classmates on Dec. 15 went viral, and Renna has become an icon of India's student protest movement. Lauren Frayer/NPR hide caption

Since mid-December, demonstrations have erupted across India, in communities of all faiths. The biggest police crackdowns have occurred in predominantly Muslim areas, and human rights organizations say police have used excessive force.

More than two dozen people have been killed in anti-CAA protests since parliament approved the new citizenship law on Dec. 11. Most of the deaths have occurred in India's largest state, Uttar Pradesh, north of the capital. The vast majority of those killed have been Muslim, even though the protest crowds have included Hindus — India's majority religion — and members of other religious communities. 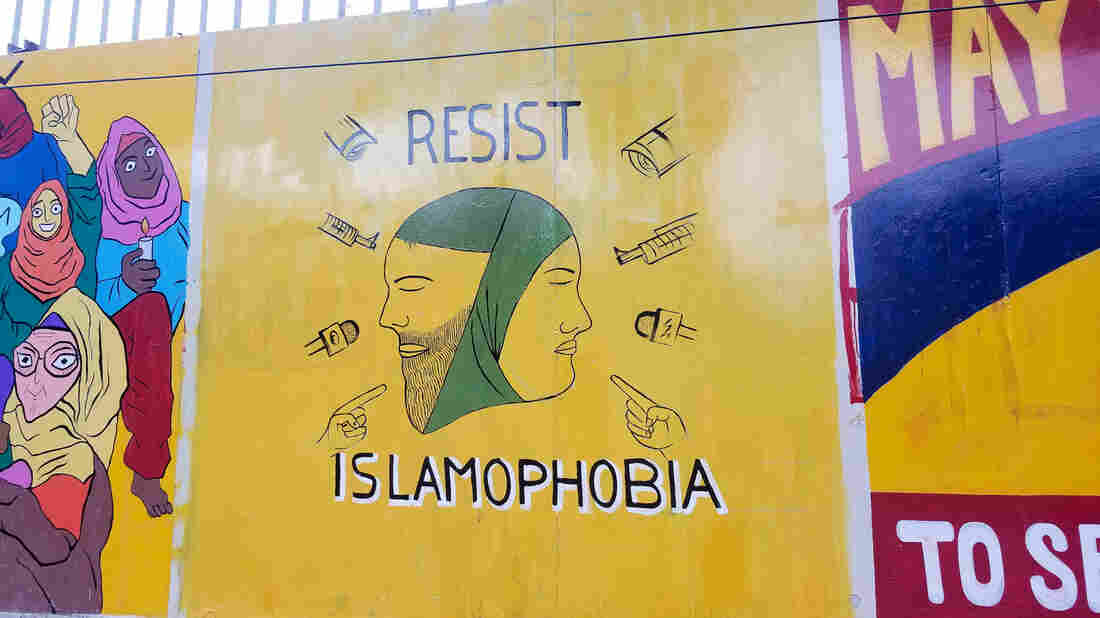 Murals on the outer walls of the campus of Jamia Millia Islamia in New Delhi, where students have been protesting a new citizenship law that excludes Muslim refugees. Lauren Frayer/NPR hide caption

That's raised questions about whether police have targeted Muslim protesters because of their faith.

"He didn't understand why people were demonstrating"

In an impoverished Muslim enclave in Meerut, a city of 1.5 million in Uttar Pradesh, Nafisa and her daughter-in-law Reshma, who tell NPR they go by one name, sit cross-legged on a bed, both veiled and weeping. The windowless bedroom is painted deep blue, and the walls are streaked with grime. An infant sleeps under the covers next to them.

They are mourning Nafisa's 28-year-old son, Mohammed Mohsin, who was shot dead outside their house on Dec. 20, as anti-government protests raged a block away.

"He was illiterate. He didn't understand why people were demonstrating," says Nafisa, sighing between sobs. Her son had "just gone out to gather hay for his cattle when police shot him dead."

She and her daughter-in-law still haven't told Reshma and Mohsin's four-year-old son, but plan to tell the child very soon. He thinks his father is away buying toys, Nafisa says.

Five other men were fatally shot the same day in Meerut. In this religiously mixed city, which has a larger proportion of Muslims than many other Indian towns, Muslim residents are concentrated in a narrow warren of unpaved lanes near a marketplace in the city center. More affluent Hindus tend to live in Meerut's suburbs. 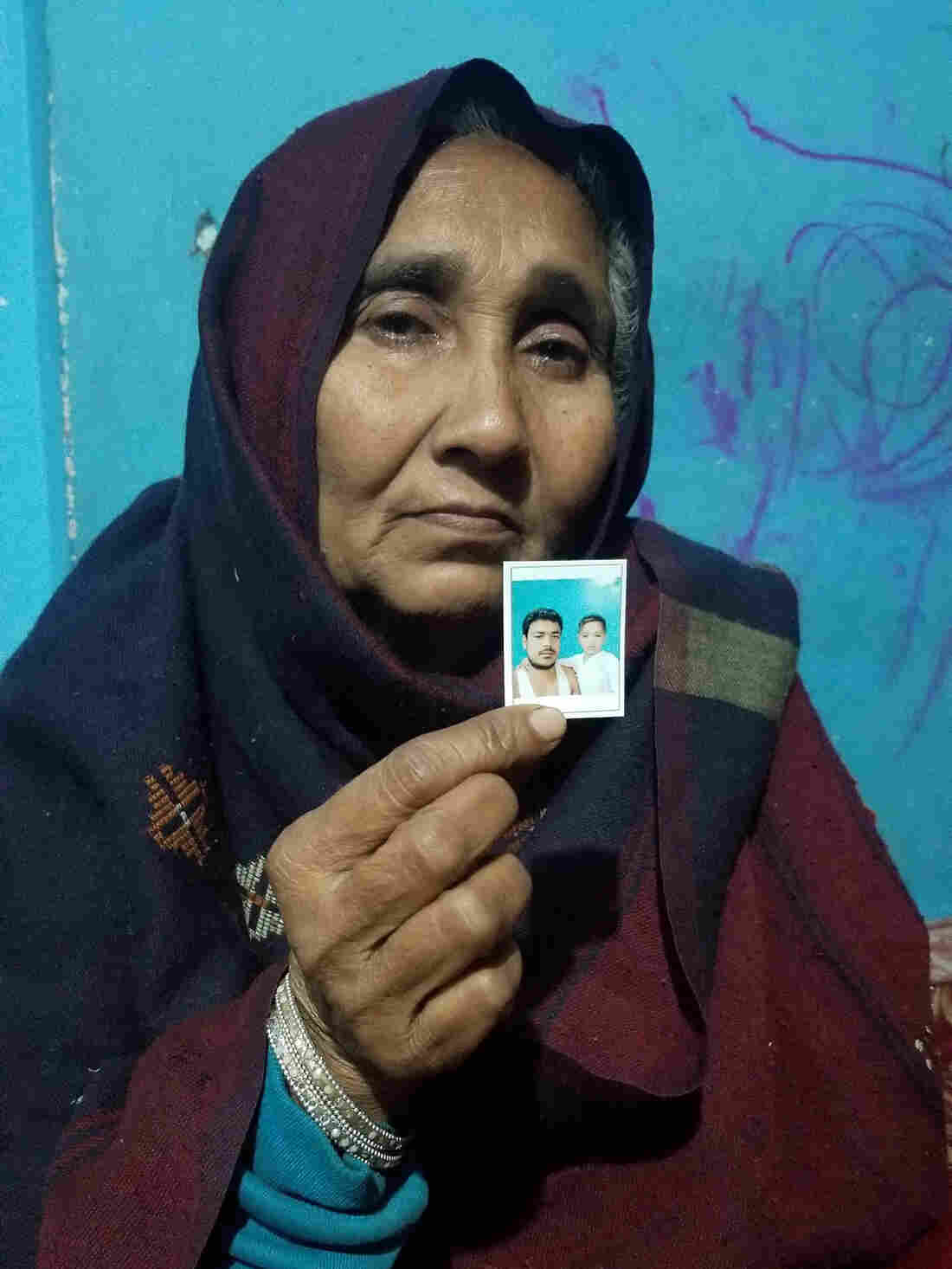 Nafisa, who goes by one name, holds a photo of her son Mohammed Mohsin with his son, now four years old. Mohsin was shot dead last month outside the family's home in Meerut. Lauren Frayer/NPR hide caption 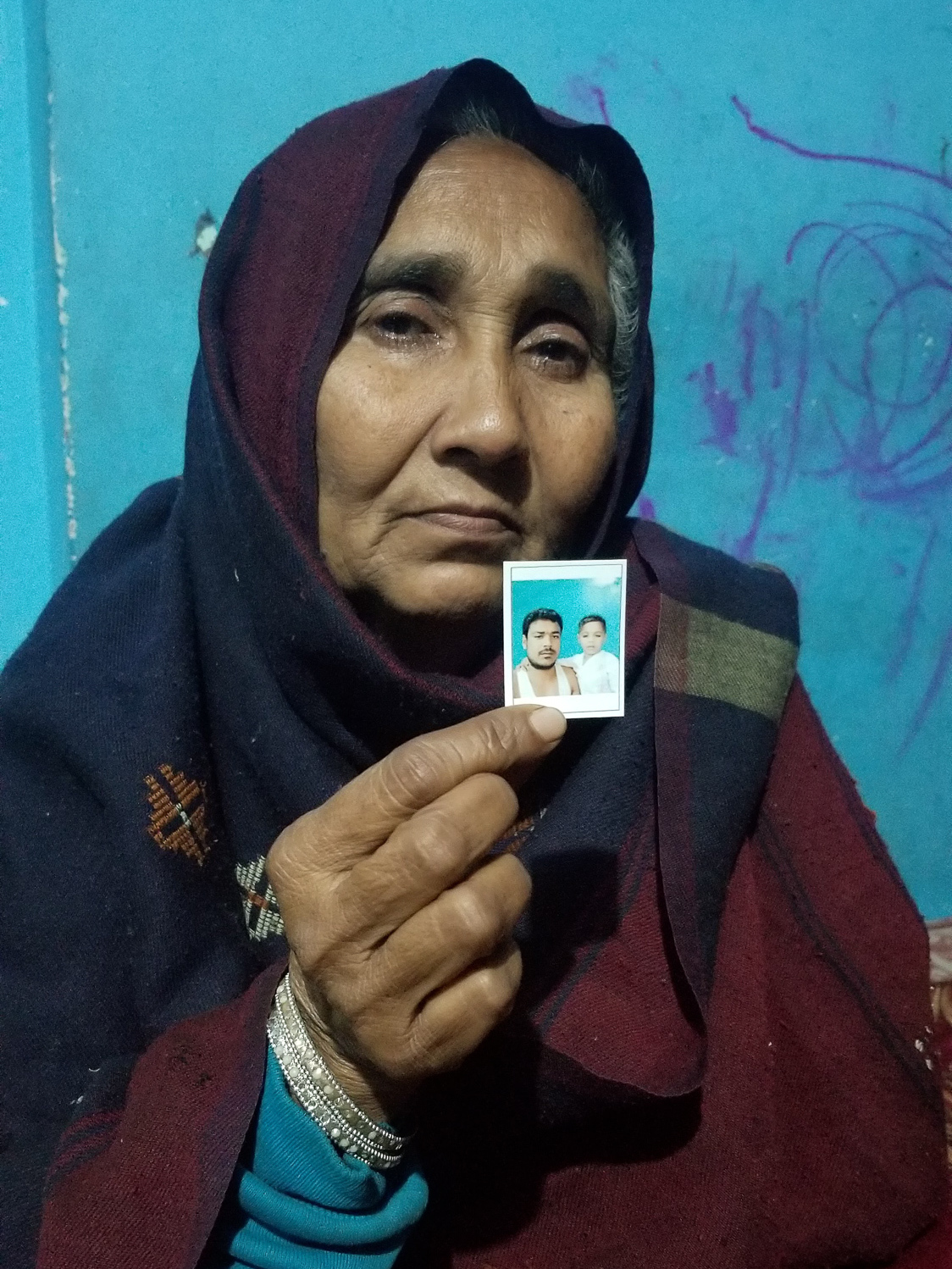 Nafisa, who goes by one name, holds a photo of her son Mohammed Mohsin with his son, now four years old. Mohsin was shot dead last month outside the family's home in Meerut.

All those killed were Muslims. Their families blame police, who admit they used live rounds near protesters on Dec. 20 but say they fired only into the air, aiming to disperse crowds.

Indian police blame the protesters for violence and claim hundreds of officers across Uttar Pradesh have been injured, including dozens of bullet injuries. Local media have been able to document only one such case. Police maintain that any violence by personnel was a last resort, used only in self-defense.

"The protesters became violent. They threw stones at us and set fire to things. They had guns themselves, and they fired at us first," the director-general of Uttar Pradesh police, O.P. Singh, told India's NDTV last month. "So we had no choice."

NPR was unable to find witnesses in Meerut who saw police firing directly at anyone on Dec. 20. No police officer is known to have faced legal action or reprimand for the deaths.

In a Dec. 15 speech, Modi blamed the violence at anti-CAA protests on his political opponents and their allies. He said those responsible for alleged acts of arson "can be identified by their clothes" — which many interpreted as a reference to Muslim dress.

Muslims "just want to keep their heads down"

Police have detained thousands of people during anti-CAA rallies across Uttar Pradesh, including at least 15 in Meerut. Authorities shut off the internet temporarily in at least 15 districts and imposed curfews.

The Uttar Pradesh state government has issued notices to at least 230 of those arrested and warned of property confiscation as a penalty for damage to public property during demonstrations.

Bano, who goes by one name, says her 17-year-old son Amjad was flying a kite near their home in Meerut during the protests on Dec. 20 when a stray bullet pierced his hand. The family rushed him to a local hospital. 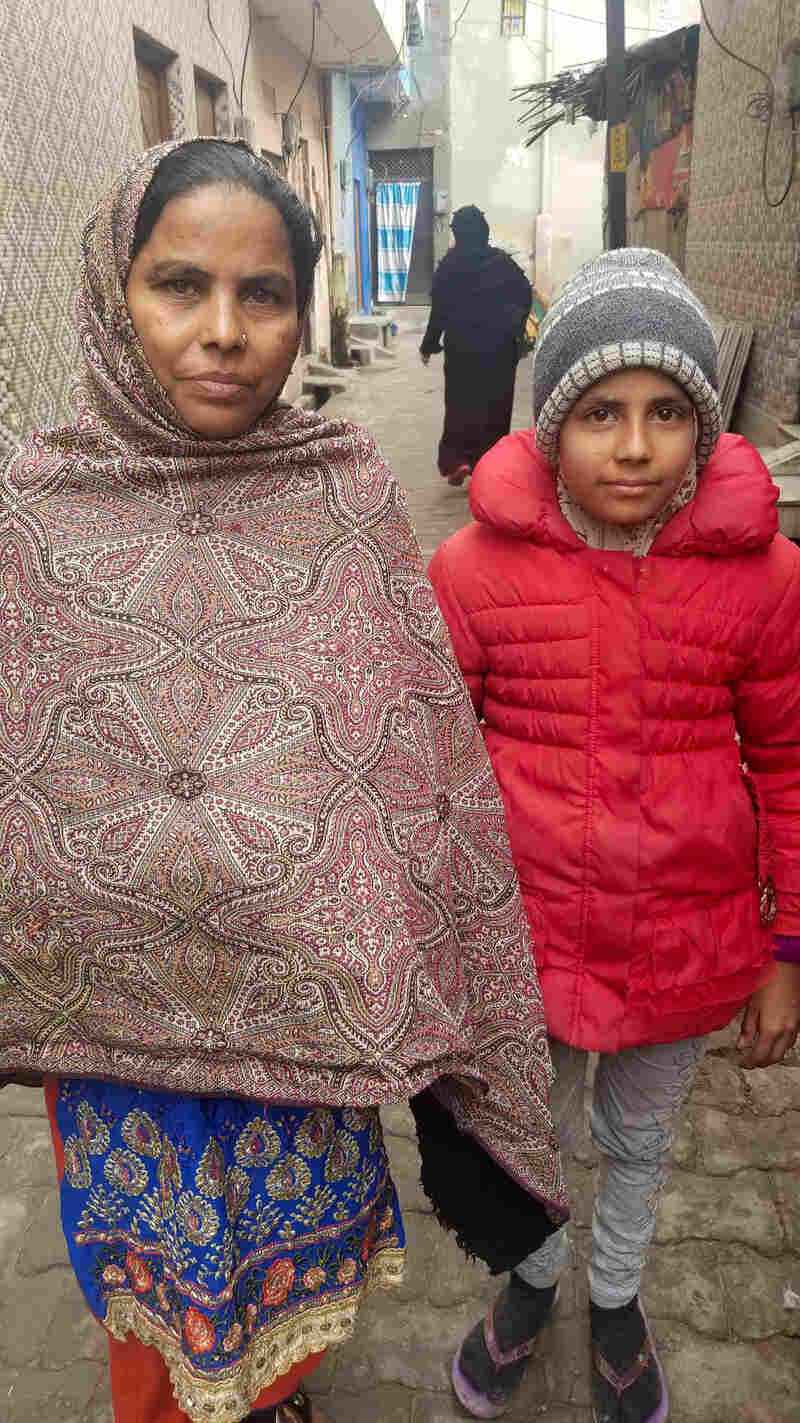 Bano (left), who goes by one name, and her daughter stand outside their home in Meerut. Another of Bano's children, 17-year-old Amjad, was wounded by police last month, and then arrested and charged with inciting violence. The family says he is innocent. Lauren Frayer/NPR hide caption

"Police arrived at the hospital soon after he was admitted and stayed with him 24 hours a day — even when he went to the toilet," Bano, 38, recalls. "They assured me I didn't need to worry, though. 'Just get him treated and take him home,' they said."

But police arrested Amjad as soon as he was discharged. His mother says she's been told he faces 19 charges, including rioting and attempted murder. The family insists he's innocent. Their neighbors pooled money to hire him a lawyer, Bano says. She's worried her son's hand won't heal properly in jail. Amjad had recently left school to take a job in a shoe store.

"How will we survive without his wages?" Bano cries. "How will he ever earn a livelihood?"

Danish Ahmed, who works in a Meerut sofa upholstery shop, says his father urged him not to join a crowd of protesters outside a local mosque on Dec. 20. So when gunfire erupted, he was at home and he watched people flee down his street.

He finds it hard to believe that any of his neighbors would attack police, he says. And he believes police fired indiscriminately into his densely populated, mostly Muslim neighborhood, and were not targeting anyone specifically or deliberately.

"Muslims in this town just want to keep their heads down. They're scared. They don't want to antagonize," says Ahmed, 23. "Most of them don't even have time or inclination to protest. They just want to take care of their families."

Saleem Siddiqui's consulting office is right across the street from a bullet-pocked apartment building.

"Police have used excessive force in Muslim areas like this," he says. "They're trying to intimidate."

Siddiqui used to make a living helping his neighbors — many of whom are illiterate and uneducated — apply for food ration cards or government IDs. But since last month's shootings, he has become a full-time grief counselor — and helps families apply for post-mortem reports and death certificates.

"India's founding fathers wrote equal rights into our constitution, but it feels like this government is moving away from that," he says. "I'm worried our democracy is in danger."

Back on the Jamia Millia campus in New Delhi, Aysha Renna's phone has been buzzing nonstop. Ever since the Dec. 15 video of her scolding police went viral, students keep stopping her on campus to congratulate her. She gives frequent media interviews, and is heading off on a speaking tour this week.

"I am a student, and now I have a platform. I am not scared," she says. "But have you heard about what's happening in Uttar Pradesh? They're targeting Muslims over there. Unlike us students, local people are so much more scared."

They're scared, she says, "because their lives are not at all safe."