Kobe Was 'More Than An Athlete': The Sports World Mourns A Basketball Legend

Kobe Was 'More Than An Athlete': The Sports World Mourns A Basketball Legend 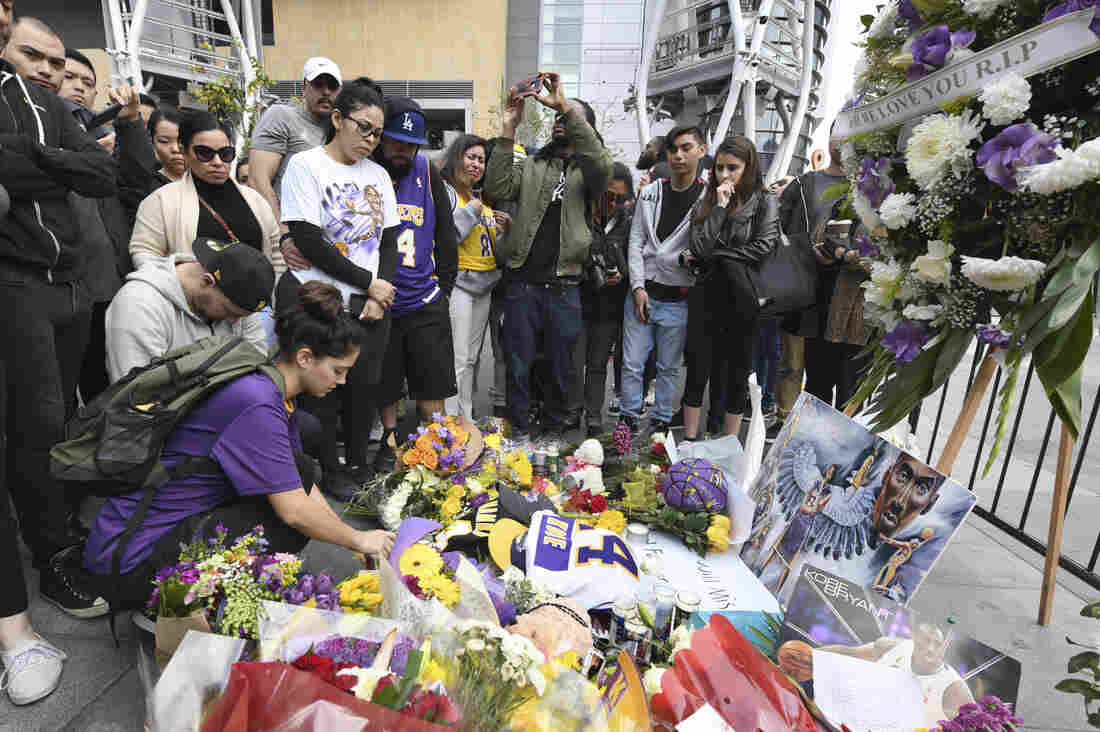 Valerie Samano, left, places flowers at a memorial near the Staples Center in Los Angeles, after the death of Laker legend Kobe Bryant on Sunday. Michael Owen Baker/AP hide caption Valerie Samano, left, places flowers at a memorial near the Staples Center in Los Angeles, after the death of Laker legend Kobe Bryant on Sunday.

Kobe Bryant and his 13-year-old daughter Gianna Maria Onore Bryant, known as "GiGi," died in a Sunday morning helicopter crash in Calabasas, Calif. They were among nine people on board, all of whom were killed in the crash.

The news of Bryant's death sent shock and sadness throughout the sports world and beyond. Stars from across the NBA, fans and friends poured their emotions into tributes on social media to honor one of the greatest players in basketball history.

"Words can't describe the pain I'm feeling," Michael Jordan said in a statement. "I loved Kobe — he was like a little brother to me."

The Golden State Warriors cut their practice short to grieve Bryant's death. In Denver, the Nuggets and the Houston Rockets held a moment of silence to remember Bryant.

The Rockets and Nuggets held a moment of silence before tipoff to remember Kobe Bryant. pic.twitter.com/PAiFHze1LK

Later, the Toronto Raptors and the San Antonio Spurs opened their game with matching shot-clock violations. Both teams blew through the 24-second clock — a nod to Bryant's former jersey number.

In Orlando, Fla., spectators at the NFL Pro Bowl interrupted a moment of silence dedicated to the Lakers star with chants of "Ko-be, Ko-be."

A moment of silence followed by chants of Kobe @CWStadium during the @NFL Pro Bowl in Orlando. Latest on @WFTV after the game. #KobeBryant pic.twitter.com/uD9jzmgJVK

"I had so much respect for him as a competitor," Brees said. "I mean, one of the great competitors of any generation, not just with sports, but I think just the way he approached a lot of things and what he was doing now after basketball."

"He inspired so many people,"

In L.A., fans celebrated Bryant's life by gathering outside of the Staples Center — some bringing purple and yellow flowers, or donning Kobe gear — where Bryant led the Lakers to five championships over his 20 years with the team.

Heartbreak at the Staples Center as fans gather to remember one of the greatest athletes of all time. Rest In Peace Kobe Bryant. #RIPMamba #Kobe pic.twitter.com/QYgro4NQ4S

Former President Barack Obama said the basketball legend was just getting started with a promising life off the court. "Michelle and I send love and prayers to Vanessa and the entire Bryant family on an unthinkable day," Obama tweeted.

Kobe was a legend on the court and just getting started in what would have been just as meaningful a second act. To lose Gianna is even more heartbreaking to us as parents. Michelle and I send love and prayers to Vanessa and the entire Bryant family on an unthinkable day.

" There's no words to express the pain Im going through with this tragedy of loosing my neice Gigi & my brother," Shaquille O'Neal tweeted of his former teammate. " I love u and u will be missed. My condolences goes out to the Bryant family and the families of the other passengers on board. IM SICK RIGHT NOW."

O'Neal and Bryant were a fearsome twosome that took Los Angeles to three consecutive championships before their relationship soured. In later years, the two expressed regrets over their feud.

Kobe was so much more than an athlete, he was a family man. That was what we had most in common. I would hug his children like they were my own and he would embrace my kids like they were his. His baby girl Gigi was born on the same day as my youngest daughter Me’Arah. pic.twitter.com/BHBPN5Wq8V

Jeannine & I are absolutely shocked to hear of the loss of one of my favorite people & one of the best basketball minds in the history of the game! Our hearts & prayers to Vanessa & his girls. @kobebryant you were my biggest fan, but I was yours #RIPMAMBA @NBA @espn @SLAMonline pic.twitter.com/Ll0BD6VWgr

Lakers legend Kareem Abdul-Jabbar called Bryant a leader who "inspired a whole generation of athletes." After meeting Bryant as an 11-year-old, Abdul-Jabbar, 72, watched Bryant grow into a shooter who he once saw put up a 81-points in a single game.

Most people will remember Kobe as the magnificent athlete who inspired a whole generation of basketball players. But I will always remember him as a man who was much more than an athlete. pic.twitter.com/9EZuwk8wrV

"But I will always remember him as a man who was much more than an athlete," he said.