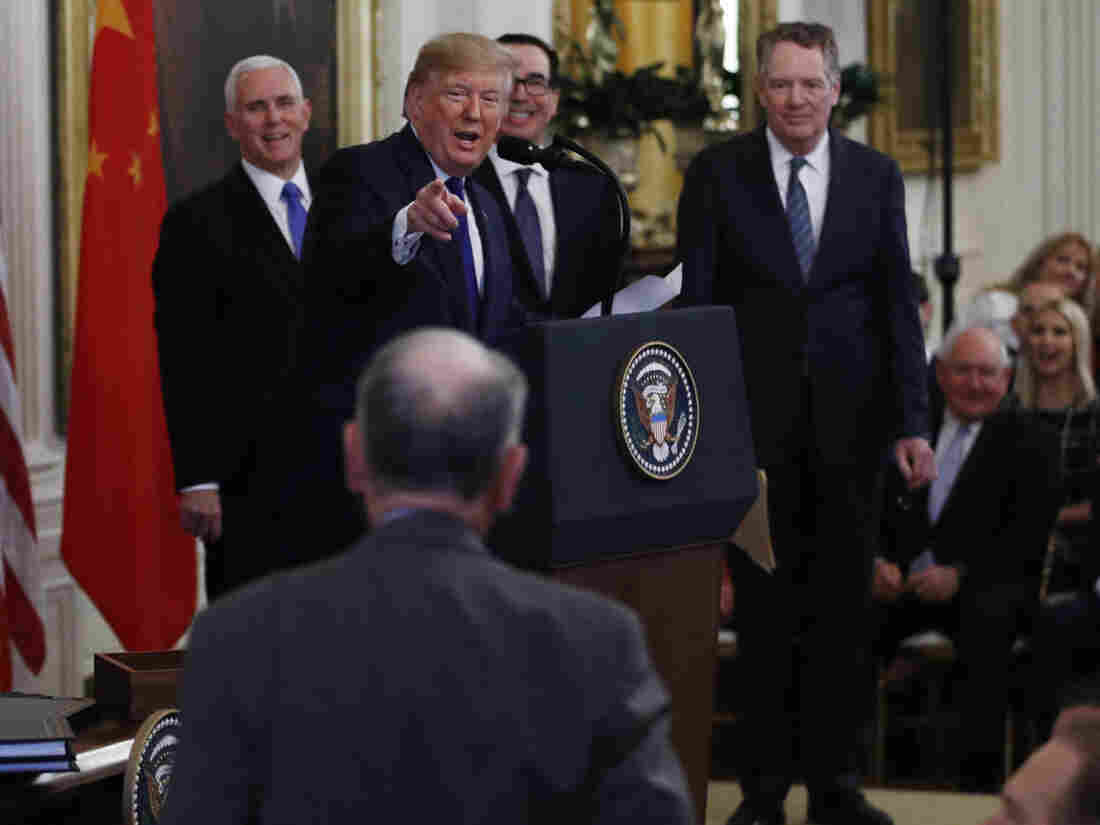 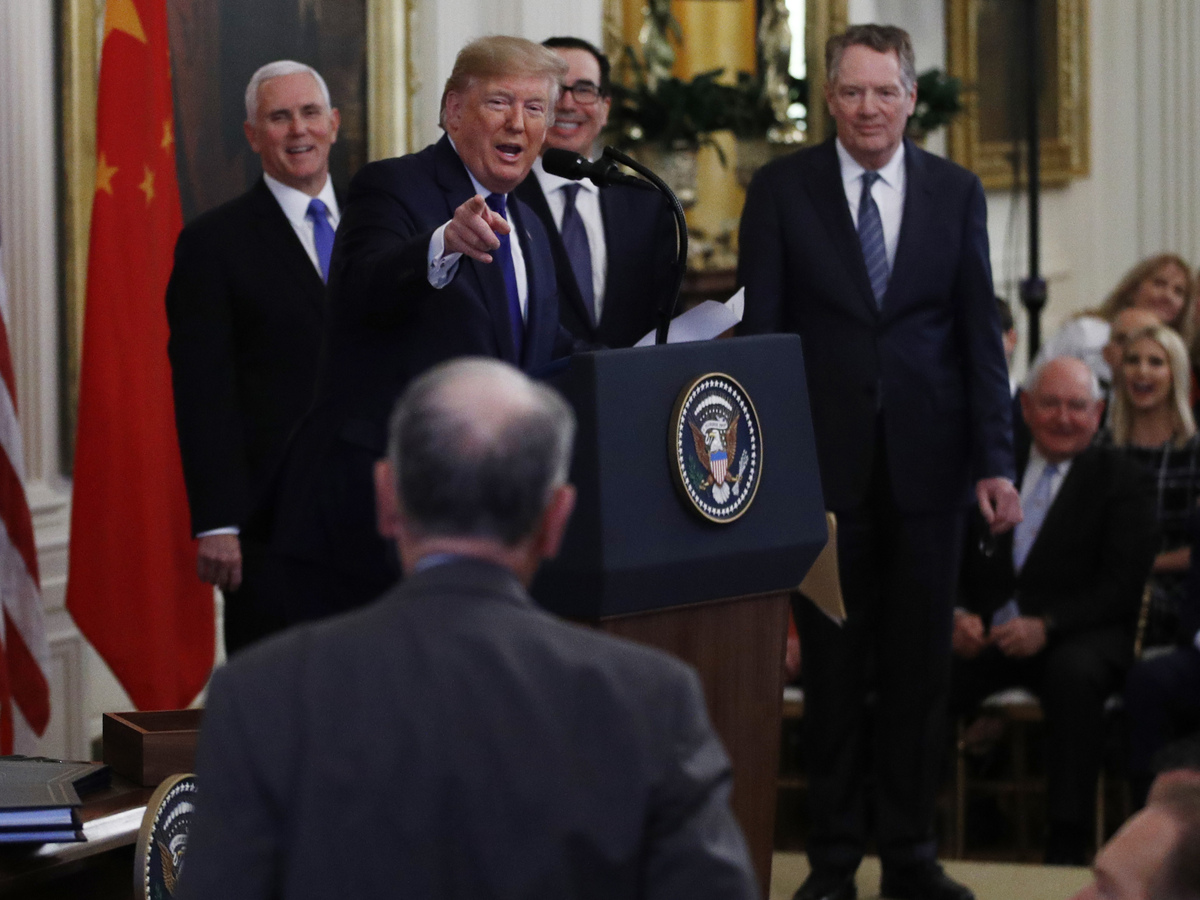 As the second week of the Senate impeachment trial begins, President Trump is making sure not to fully cede the spotlight to Democrats' effort to oust him.

Trump is set to meet Monday with Israeli Prime Minister Benjamin Netanyahu and then Netanyahu's political rival, Benny Gantz, as the administration plans to release its plan for Middle East peace.

On Wednesday, Trump is expected to sign a much-anticipated trade deal with Mexico and Canada in a White House ceremony.

And he has teased plans to expand his so-called travel ban, adding new restrictions for travelers from additional countries. He says it's a matter of national security.

Hogan Gidley, the White House deputy press secretary, also cited the recent signing of "Phase 1" of a trade deal with China and the president's trip to Davos, Switzerland, where Trump touted U.S. economic accomplishments at the World Economic Forum.

Even as Trump grows frustrated with efforts to oust him, his schedule offers him an opportunity to promote issues that are important to him and his Republican base.

Shifty Adam Schiff is a CORRUPT POLITICIAN, and probably a very sick man. He has not paid the price, yet, for what he has done to our Country!

Critics accuse Trump of trying to distract from his impeachment trial.

Matt Bennett, who worked on former President Bill Clinton's two presidential campaigns, calls Trump a master at using his official powers — as well as Twitter account — to get people talking about something else.

"It is absolutely not a coincidence or a surprise that he's rolling out a lot of big things on the very week in which the Senate [may vote] on impeachment," Bennett said. "The notion that he would allow the Senate to vote on removing him from office without doing something completely different, to show that he is, you know, completely unaffected by this and is moving on, is to ignore three years of history with Trump as president."

Trump's peace plan may not solve the deep divisions between Israel and the Palestinians. (Trump has said the administration will talk with Palestinians at a later time.) And his partial trade deal with China doesn't address the root causes of the trade war.

But both have proved to be great opportunities for Trump to grab attention, at least temporarily, away from impeachment. 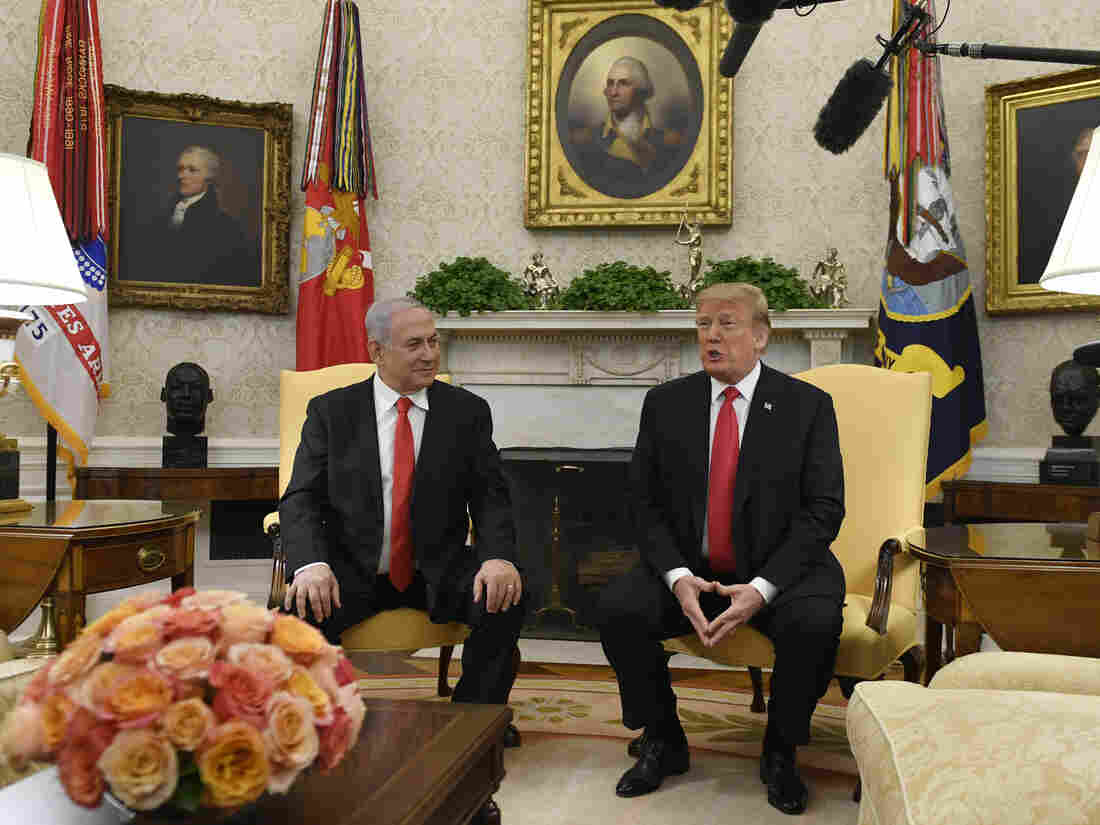 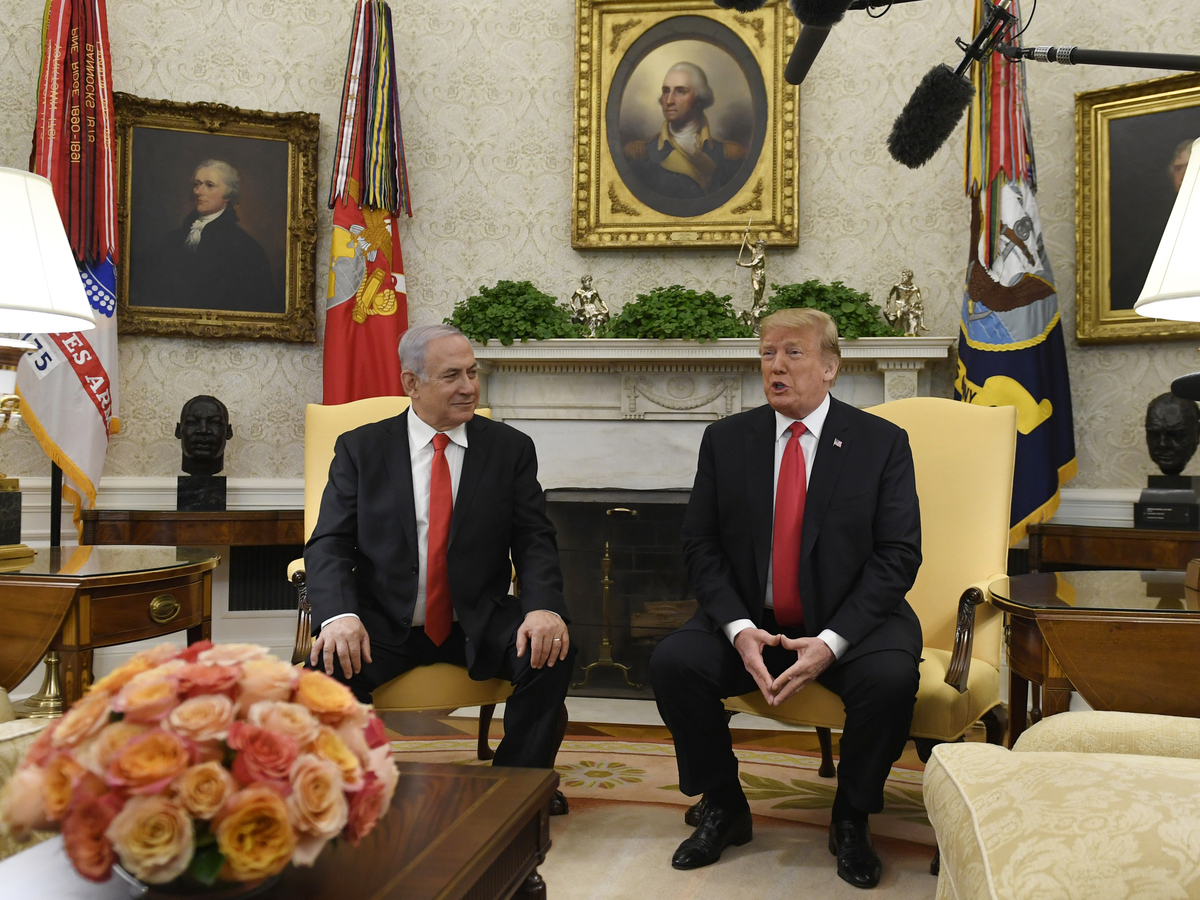 It would not be the first time the president offered counterprogramming to the day's news.

Earlier this month, at the same time the House was voting to send its articles of impeachment to the Senate, Trump held a more-than-hour-long ceremony to celebrate the partial trade pact with China. Much of that time was spent reading out names and thanking people who were there — and others who were not — for their support.

On the night in December he was impeached, Trump flew to Michigan and held a widely televised campaign rally.

"By the way, it doesn't feel like I'm being impeached," he told the raucous crowd.

And this week, Trump holds two rallies, including one in Des Moines, Iowa, on Thursday — just days before the Democratic caucuses there.

Alex Conant, a Republican strategist, said there is no question the White House wants to present the president as being focused on doing his job while Congress is focused on impeachment.

Conant said all these issues — from global trade to peace in the Middle East, as well as Trump joining Friday's March for Life rally — are important issues to wide swaths of conservative voters. They also help ease uncertainty among Republican members of Congress about the allegations against him. 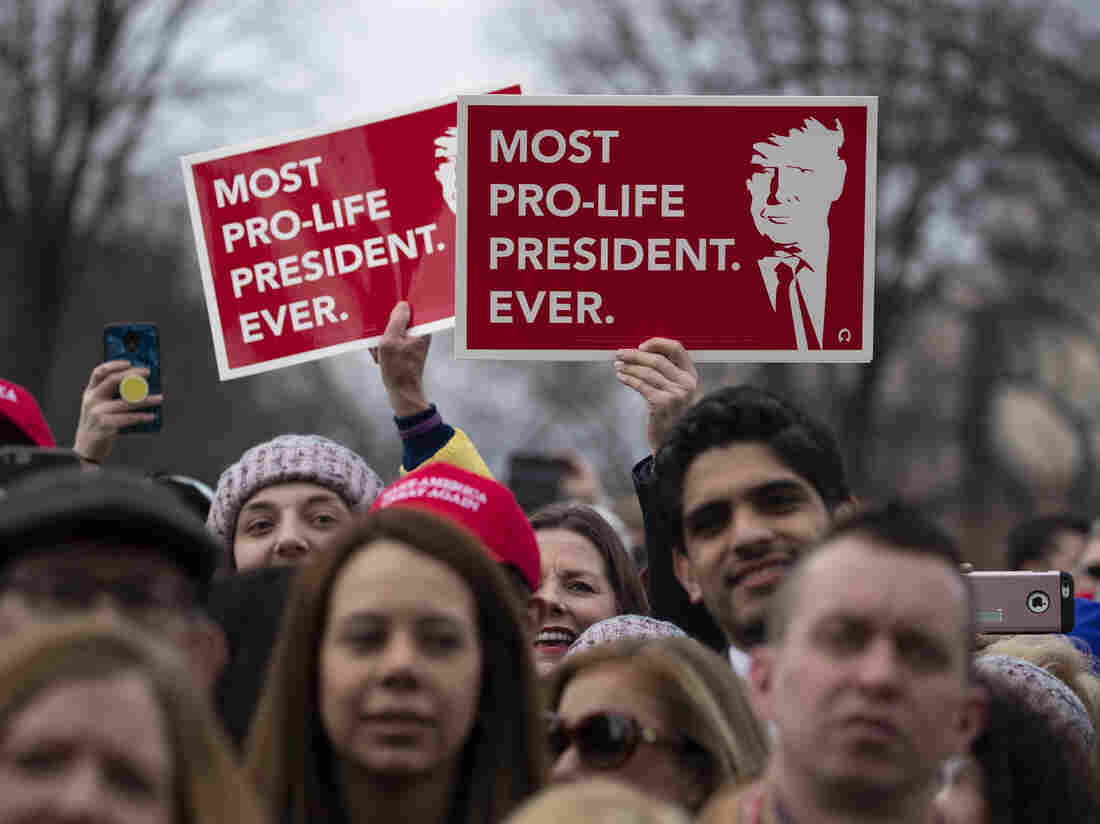 Supporters listen and hold signs as President Trump speaks during the annual March for Life rally on the National Mall in Washington, D.C., on Friday. Evan Vucci/AP hide caption 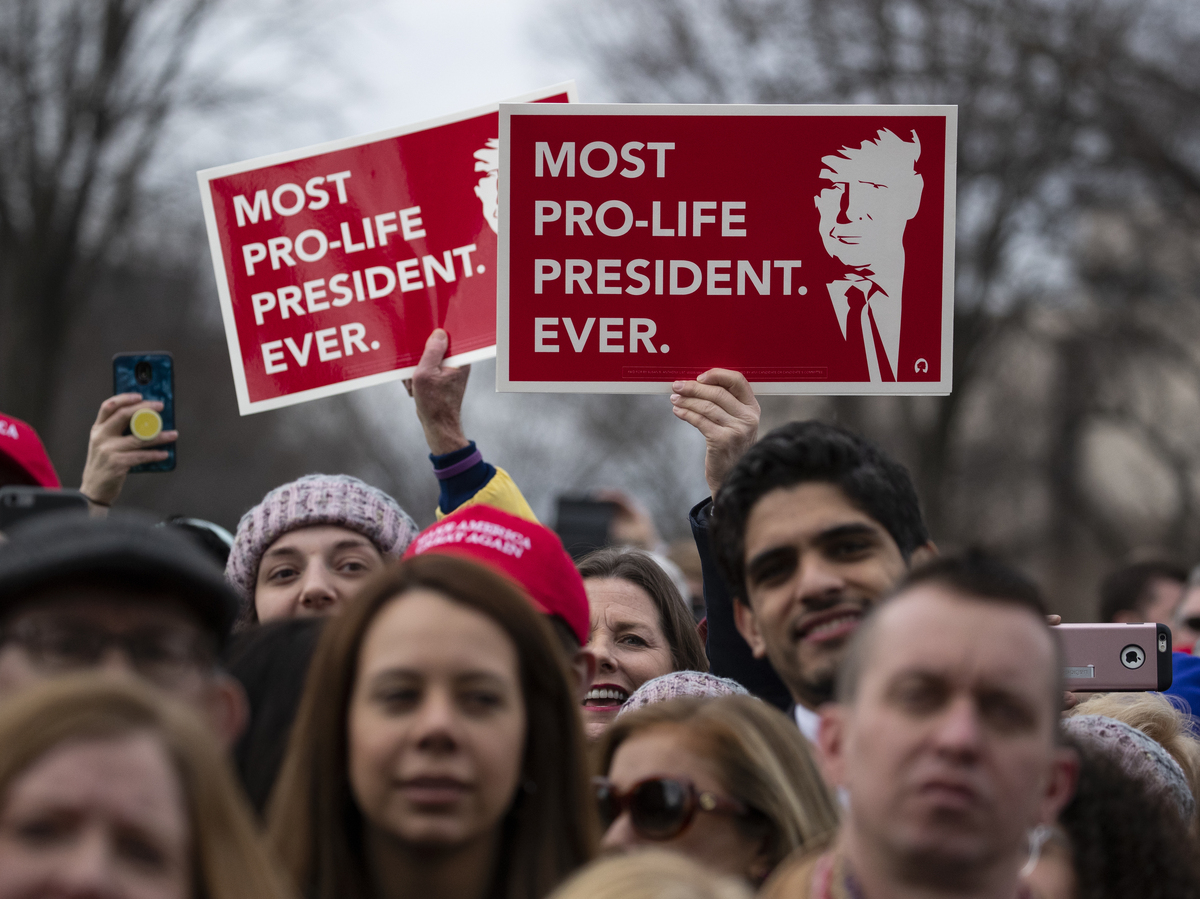 Supporters listen and hold signs as President Trump speaks during the annual March for Life rally on the National Mall in Washington, D.C., on Friday.

"Trump's actions in Ukraine make a lot of Republicans very uncomfortable, especially congressional Senate Republicans," Conant said. "But then when they see him pushing these conservative policies and being their champion on issues they really care about, whether it's trade or immigration or abortion, it reminds them that at the end of the day, the Trump presidency is worth it."

Republican strategist Ryan Williams is impressed with what he called the "incredibly choreographed" rollout of successive agreements and meetings with foreign leaders.

The challenge he sees is whether Trump can stick to the plan his aides created. Or will he become distracted by the impeachment drama, respond in an aggressive fashion, and then draw attention away from his policy wins?

"He needs to remain disciplined," Williams said. "Everybody needs to be singing from the same song sheet in order to drive a message. And if the president is tweeting or talking about something else, he's undercutting the message that his advisers and his administration are trying to drive."