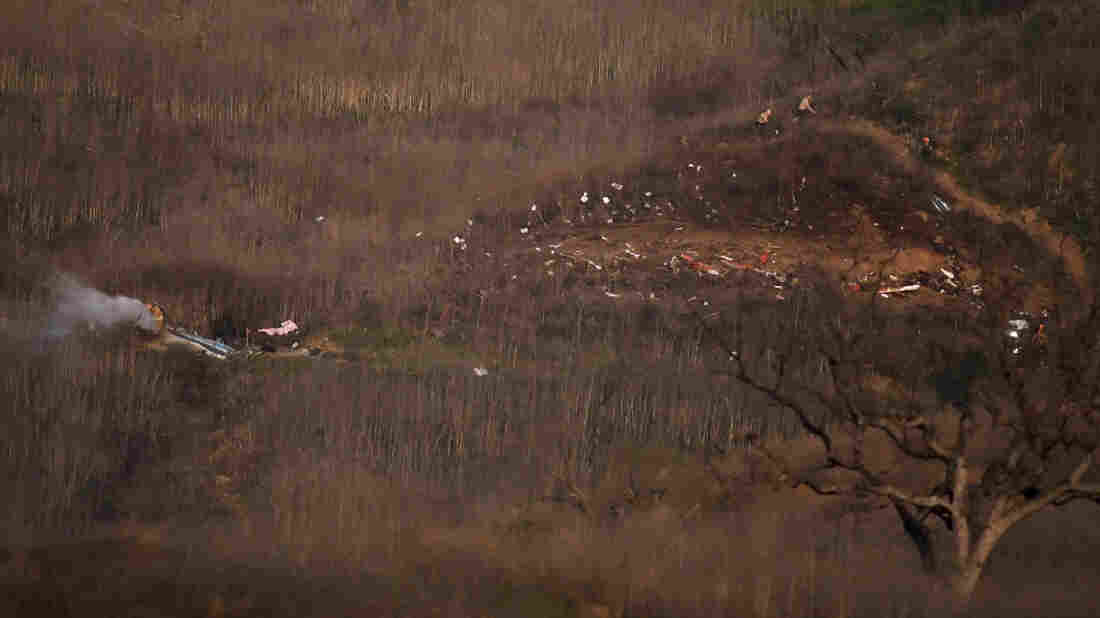 Police work around the scene of a helicopter crash that killed former NBA player Kobe Bryant, his daughter and seven others in Calabasas, Calif., on Sunday. Kelvin Kuo/AP hide caption 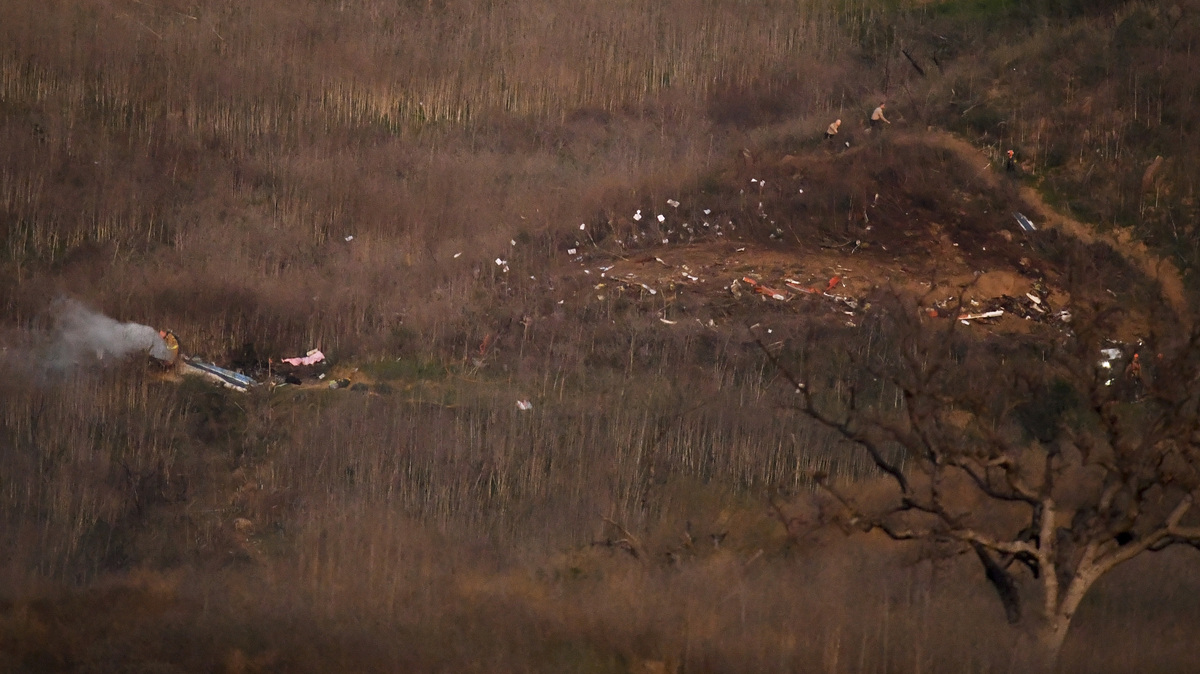 Police work around the scene of a helicopter crash that killed former NBA player Kobe Bryant, his daughter and seven others in Calabasas, Calif., on Sunday.

Investigators are poring over the scene where former NBA superstar Kobe Bryant, his daughter Gianna and seven other people died Sunday in a helicopter crash in Calabasas, Calif. It's not clear why the aircraft went down, although weather conditions at the time were difficult. The National Transportation Safety Board has sent a team to the site and is now leading the investigation.

The helicopter took off from John Wayne Airport in Orange County at 9:06 a.m. local time, according to Flightradar24. Bryant's group was headed to his Mamba Sports Academy in Newbury Park. A Federal Aviation Administration official told NPR on background that no flight plan was filed.

The Sikorsky S-76B was flying in low clouds and fog, and for part of its trip it was operating under "special VFR" (special visual flight rules) clearance, meaning the pilot had to stay clear of clouds and fog. Rather than flying under instrument flight rules (IFR) that would have helped him get through cloud banks, he was navigating by using highways and landmarks as references. Such requests are atypical — but not uncommon.

"The pilot in command is responsible for determining whether it is safe to fly in current and expected weather conditions," said Ian Gregor, public affairs manager for the FAA's Pacific division.

An aviation weather advisory for Sunday morning had warned pilots that poor visibility would require them to navigate by instrument flight rules — using their cockpit instrument systems to get through cloud cover.

Speaking at a Monday evening news briefing, NTSB member Jennifer Homendy asked the public for photos of the weather in the area of the crash. However, she emphasized: "We are not just looking at weather here, though. We look at the man, the machine and the environment."

Homendy said she had been to the crash scene — which she described as "devastating" — and said that the debris field covered "about 500 to 600 feet."

The helicopter crashed in steep terrain in the mountains near the 4200 block of Las Virgenes Road in Calabasas. The crash was reported to the Los Angeles County Fire Department at 9:47 a.m. The fiery wreckage ignited a small brush fire. Firefighters found no survivors.

The weather was bad enough Sunday morning that the Los Angeles Police Department grounded its helicopters. The conditions "did not meet our minimum standards," says Josh Rubenstein, public information director at the LAPD.

I will add this to the #KobeBryant thread.

Airmet Sierra that was valid until 2100Z today. (1PM Local)

Highlights IFR Conditions and most importantly Mountain Obscuration due to poor weather.

All the signs and clues were there..... Freaking senseless. pic.twitter.com/aedzdv5D4R

By Tuesday, investigators had recovered all nine bodies from the helicopter wreckage and through the use of fingerprints had identified four of them, Kobe Bryant, John Altobelli, Sarah Chester and the pilot, according to the Los Angeles County medical examiner.

The pilot was Ara George Zobayan. The FAA database lists him as an instrument-rated commercial pilot licensed to fly helicopters. In addition, he was both a helicopter flight and ground instructor.

"Bryant's daughter, Gianna, was an up-and-coming player in her own right," member station KPCC/LAist reports. "She played with the Los Angeles Lady Mambas, which was coached by Bryant and is part of a co-ed youth basketball league he created in partnership with the Los Angeles Boys and Girls Club. The team plays at Bryant's Mamba Sports Academy in Thousand Oaks, where the group was heading Sunday morning for a tournament."

Investigators will have to deal with rugged and elevated terrain. On Sunday, Los Angeles County Fire Chief Daryl Osby "said it took about nine minutes for firefighters to hike extremely steep terrain to the site," KPCC/LAist reports, adding that other firefighters were lowered to the scene from a sheriff's helicopter.

Earlier, Homendy said a team of 18 people will investigate the crash. And while bad weather has been cited repeatedly as a potential cause, the team will look into numerous potential factors. At a news conference Sunday night, she listed the investigators' areas of expertise: "operations, human performance, airworthiness, structures and power plants."

Homendy added that her team will also be looking at the pilot's history, along with the helicopter's maintenance records and records related to the aircraft's owner and operator.

One NTSB staff member reached the crash site on Sunday; the rest of the team arrived in California late Sunday and met Monday morning to prepare for the complex investigation.

At Monday's briefing, Homendy said "there wasn't a black box" aboard the helicopter "and there isn't a requirement to have a black box."

She said the team at the crash site was there to gather evidence, not to determine a cause, which would require further analysis.

Homendy said there were drones at the crash scene mapping the wreckage.

After taking off from Orange County, the aircraft headed northwest over Los Angeles. Then the helicopter briefly circled several times over Glendale, after air traffic controllers asked the pilot to hold in place to allow a plane to land at a nearby airport.

The helicopter eventually continued on in a northwesterly direction and then turned south. Soon afterward, it crashed in the mountains near Calabasas.

In radio communications during the flight, the pilot tells an air traffic controller at the Hollywood Burbank Airport that he's following Interstate 5 north. The air traffic controller then says the helicopter is clear to move through the area and asks, "Actually for your transitioning to Camarillo [an airport to the west in Ventura County], did you just want to follow the 118?"

The helicopter is then handed off to a controller at Van Nuys Airport, who handled the aircraft's transition to the west along the 118 highway.

The pilot later seeks permission to start turning to the southwest toward the 101 highway. That request is granted — but controllers soon lose radio contact with the aircraft.

Homendy said Monday that the final transmission from the pilot indicated that he was climbing to avoid a cloud layer.

Before the helicopter disappears from radar, a controller tries to reach the pilot, saying, "2 Echo X-ray, you're still too low level for flight following at this time."

In the flight's final moments, the helicopter was flying between 120 and 160 knots. The aircraft then started flying faster and descending very rapidly — in excess of 5,000 feet per minute. The last flight data received from the helicopter was at 9:45 a.m., 39 minutes after it took off.

One day before the crash, the same helicopter had made a similar trip from John Wayne Airport in Santa Ana to Camarillo Airport, west of Newbury Park, leaving Saturday morning and returning that afternoon, according to the FlightAware aviation tracking site. Those trips took 30 minutes each.

The Sikorsky S-76B helicopter that Bryant's group was flying in was built in 1991. It was initially owned by the state of Illinois, but the state auctioned it off in the summer of 2015 for $515,161.

The winning bid came from a user named "Jimbagge1" — and Jim Bagge is an executive at Island Express Holding, a California company that holds the FAA registration for the helicopter: N72EX.

"Aircraft must be inspected annually or every 100 flight hours, whichever comes first," the FAA's Gregor said. "Additionally, certain parts must be replaced or overhauled at specific intervals.

"Maintenance records belong to the aircraft owner, who must make them available to the FAA for inspection upon request. The FAA looks at aircraft maintenance history as part of every accident investigation."