Accessibility links
How To Treat Postpartum Depression : Life Kit One in seven women experiences postpartum depression. But it's easy to feel alone — especially when you're told having a baby is supposed to be blissful. This episode helps both struggling moms and loved ones identify the symptoms and find treatment. 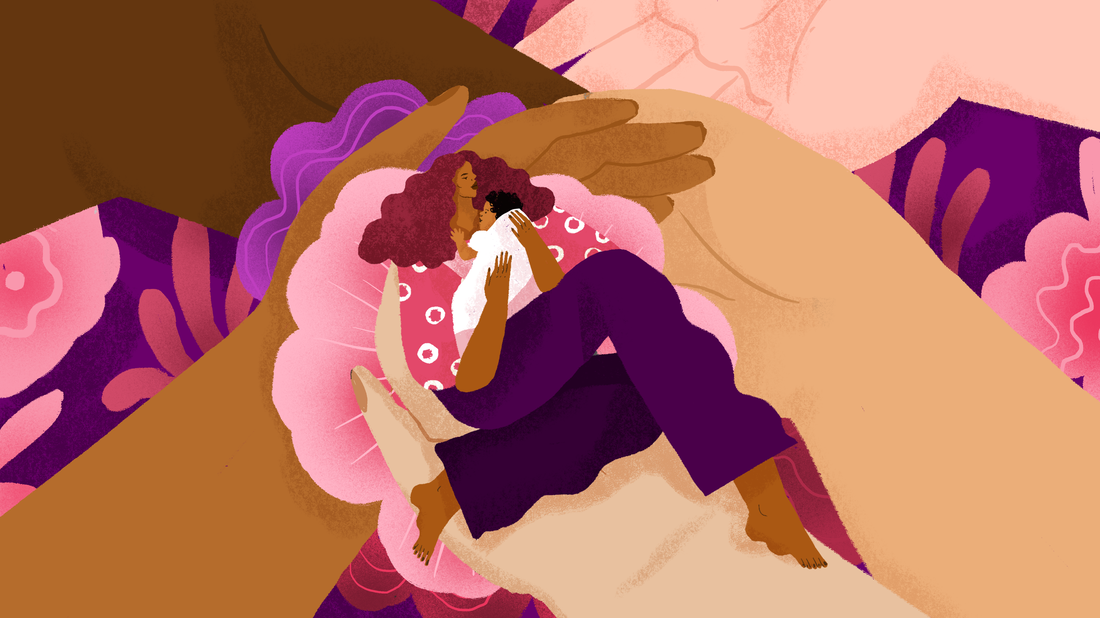 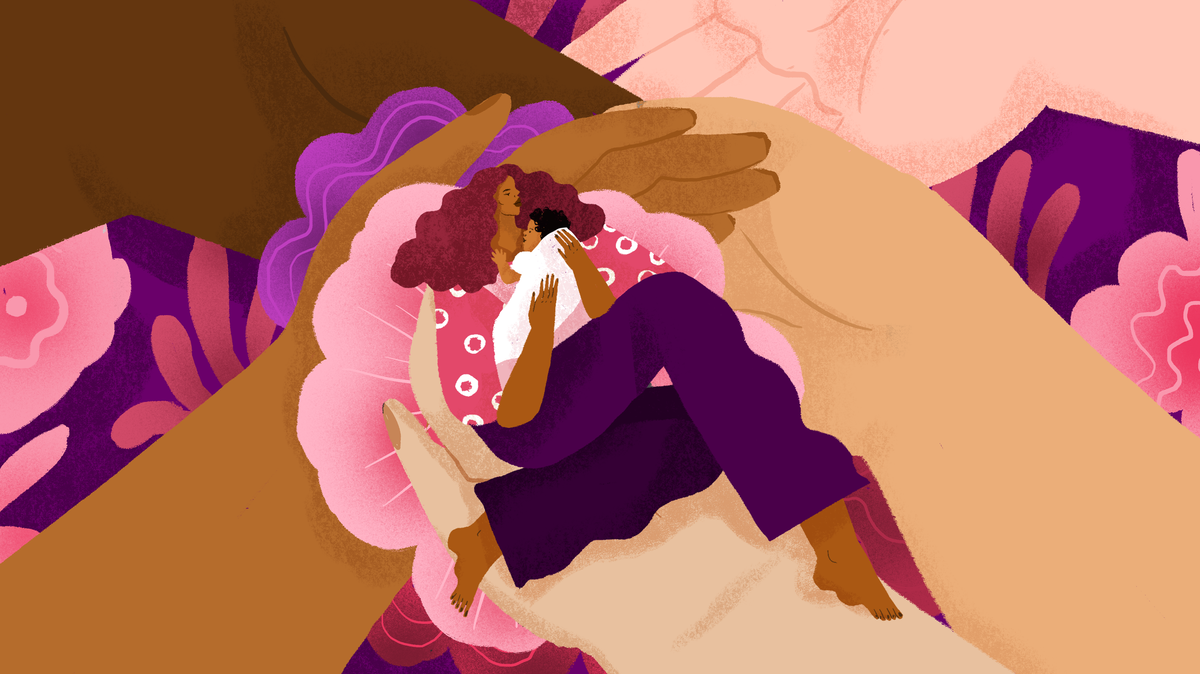 Shortly after she gave birth to her son last May, Meghan Reddick, 36, began to struggle with depression. "The second I had a chance where I wasn't holding [my son], I would go to my room and cry," says Reddick, who lives with her son and husband. "And I probably couldn't count how many hours a day I cried."

Reddick is among the many women who suffer from depression during pregnancy and after childbirth.

"There's this kind of myth that women couldn't possibly be depressed during pregnancy, [that] this is such a happy time," says Jennifer Payne, a psychiatrist and the director of the Women's Mood Disorders Center at Johns Hopkins University. "The reality is that a lot of women struggle with anxiety and depression during pregnancy as well as during the postpartum period."

An estimated one in seven women experiences depression during or after pregnancy. Among some groups, such as teenage moms and women with a history of trauma, the rate can be even higher.

Left untreated, depression during this time can have serious consequences on the health of the mother, the baby and the entire family.

"I always say if mom's not happy, no one's happy," Payne says.

So, it's important that women seek treatment, says Payne, because depression during and after pregnancy (called perinatal depression) is treatable, and women with the right treatment do recover.

We have compiled a list of five things you need to know about perinatal depression, its symptoms and treatment options. These tips are also for spouses, parents, siblings and close friends of pregnant women and new mothers, because you can help your loved one find treatment.

1. Depression and anxiety are complications of pregnancy and childbirth

More than 300 women wrote to NPR about their experiences with perinatal depression — many said that they blamed themselves for what they were going through. But mental health problems aren't the mother's fault, or failure, Payne stresses. They are complications of pregnancy and childbirth, like preeclampsia and gestational diabetes.

"Postpartum depression is actually the most common complication of childbirth," Payne says. Anxiety sometimes goes hand in hand with the depression, and for many women, the symptoms kick in during pregnancy.

Researchers don't fully understand what causes these symptoms, Payne says, but like all mental illnesses, biological factors and life circumstances are at work.

Women who have previously struggled with anxiety and depression are at a greater risk of developing depression or anxiety during this time period, Payne says. Other risk factors include poverty, marital stress, birth trauma and a history of abuse.

Big life transitions — like pregnancy and childbirth — are also major triggers for symptoms, because they add a lot of stress to people's lives.

2. Know what symptoms to look for

The postpartum period is an emotional roller coaster for most women. An estimated 80% of new moms experience the "baby blues," says Payne, which is different from perinatal depression and anxiety. "Baby blues is really a natural phenomenon that occurs in the immediate postpartum period."

So how do you know whether you're experiencing baby blues or depression? Here are the key symptoms of depression:

"The thoughts for me were like, 'Is my daughter's room too warm? Is she going to stop breathing?' " says Angelina Spicer, a comedian who also reached out to us with her story. 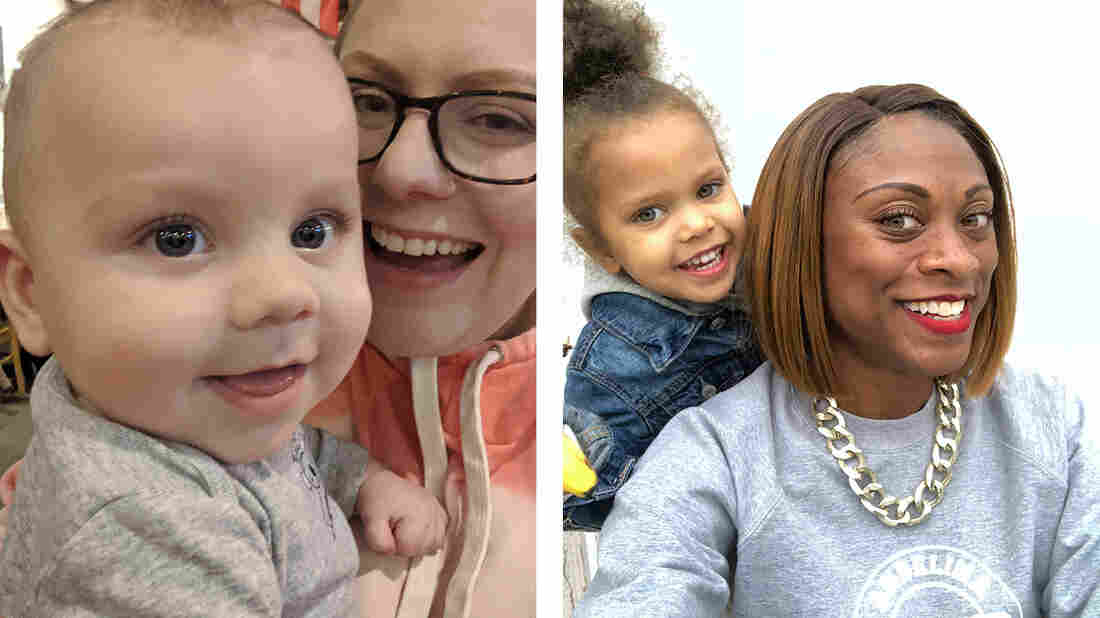 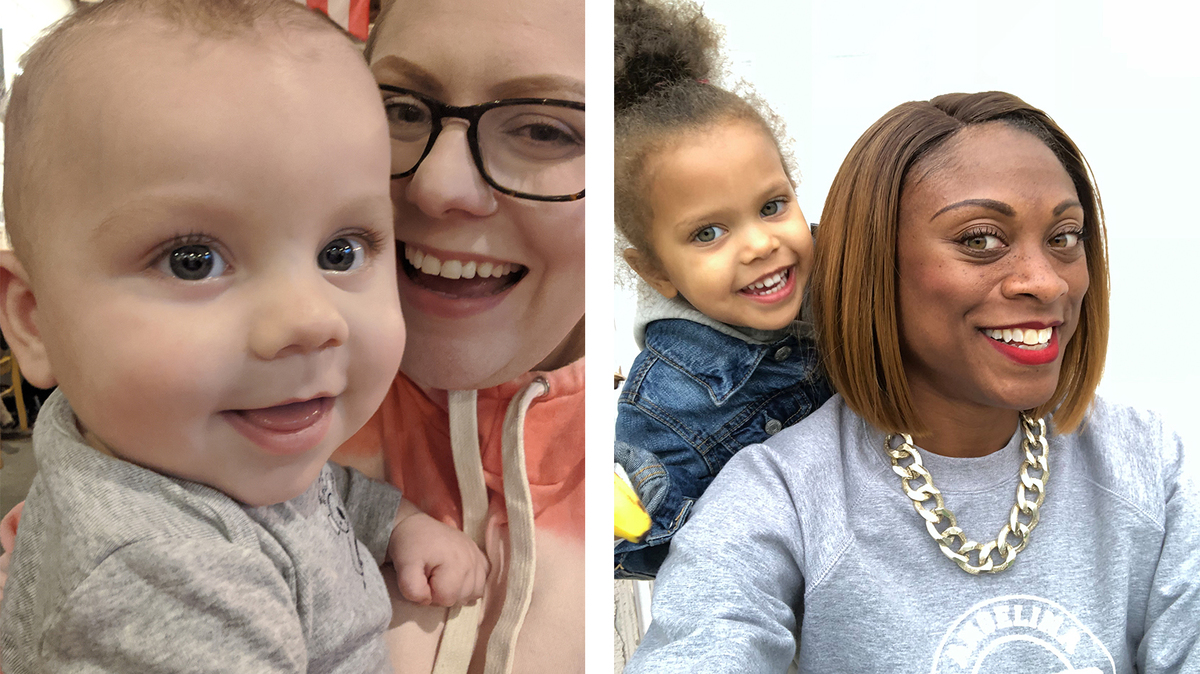 More than 300 women wrote to NPR about their experiences with depression and anxiety during and after pregnancy. Meghan Reddick, left, and Angelina Spicer, right, were two of the women who shared their stories.

Family members and friends can be on the lookout for the above and following signs, Payne says. "When people are depressed, they look different," she says. "Their eyes look different. They look sad and detached. If they smile, it doesn't go up to their eyes. Many people will become kind of slower in their thinking and their speaking process."

If you see any of these signs in yourself or someone you love, it's important to seek help.

Recent medical guidelines, including from the American College of Obstetricians and Gynecologists, recommend that physicians proactively screen pregnant women and new mothers for depression and help women at risk get treatment.

While not all physicians are doing this, there's growing awareness — especially among obstetricians and pediatricians — about the need to address perinatal depression.

So Payne suggests that women with perinatal depression reach out to their doctors.

OB-GYNS, pediatricians and even primary care physicians can screen for depression and help women get treatment.

Payne suggests being direct about your symptoms.

"I think talking straight is probably the No. 1 tip I have," Payne says. Tell them, "I'm feeling depressed. I'm really struggling. I can't sleep when the baby is sleeping. I'm not getting enough to eat."

Your doctor can refer you for talk therapy, which medical guidelines suggest should be the main course of treatment. The physician can also prescribe an antidepressant if needed. (Antidepressants are considered to be effective and safe during pregnancy and breastfeeding.) Payne notes that antidepressants in combination with talk therapy have been shown to be more effective than medication alone.

One of the hurdles that many women face in seeking treatment is convincing their families that they have an illness and that they need help.

This can be more common in communities of color, says Leena Mittal, a psychiatrist with Brigham and Women's Hospital in Boston. "I hear that over and over again," she says. "I hear that it can be really difficult to engage in conversations about mental health or that 'we don't believe in that kind of thing in my family or in my part of the neighborhood' or that 'we don't talk about those things.' "

Spicer, who is African American, struggled with this after she had her daughter.

If you run into a similar situation, Mittal suggests starting a family conversation around a goal you share with your family. "The goal is to have a well mom, a well baby, to have the mom be able to be engaged with the baby and in the care of the baby."

"That way, some of the myths can be dispelled too," she says. And the doctor can help your family understand the consequences of untreated mental illness in the mom.

Ideally, Mittal says, the health care system should be engaging women of color about these mental health issues, because research shows that women of color have more limited access to care for postpartum depression.

She and some other providers and patient advocates are working on that. But in the meantime, she suggests talking to your obstetrician about depression during prenatal appointments and asking about your risk factors, services available for you and how you can be proactive about prevention.

4. An alternative place to look for help

We heard from women who said that they went to their doctor — some even got the depression screening — but their doctor did not help them find treatment.

If you run into a dead end at your doctor's office, what do you do?

You can turn to an organization called Postpartum Support International, a nonprofit that helps women and their families find support for postpartum depression, says Ann Smith, the director of the board of the organization. "We will talk to them and give them support."

The organization also connects people with treatment. Its local coordinators keep a list of providers experienced in treating perinatal depression and anxiety, and they can also connect you to local support groups for new moms, which have also been shown to be important for recovery.

So if you or someone you know is struggling with perinatal depression or anxiety and your doctor isn't able to help you, try calling Postpartum Support International's help line at 1-800-944-4773, or you can text the organization at 503-894-9453 and a trained volunteer will get back to you within 24 hours, Smith says.

The volunteers will also stay in touch with a family until they are sure the mother is in treatment, she says. "Without it, people fall through the cracks all the time."

5. Build self-care into your routine

In the meantime, there are some things you can do on your own that should help improve your symptoms, Payne says. (And these steps can also help all new moms feel better during the exhausting, sleep-deprived first year of your child's life.)

Self-care is key. Now, before you roll your eyes at the term, let us explain. We aren't talking about fancy pedicures or getaways. When we say self-care, we mean the absolute basics: diet, hydration, exercise, sleep and social support.

They might sound simplistic, but Payne says they have been shown to improve mental health symptoms by improving your overall health, so you can cope better with the stress of taking care of a newborn.

If you're struggling with postpartum depression and anxiety, remember you're not alone, that help is available and you can recover. The path to recovery might be slightly different for every woman.

What worked for Spicer was "child care, Spanx and Zoloft."

"Child care was a huge relief for me because I had time to myself every day. Zoloft ... it lifted the fog," she says. "And the Spanx, I mean, come on! You know, your uterus after you have a baby just will not let you be great."

The audio portion of this story was produced by Andee Tagle.