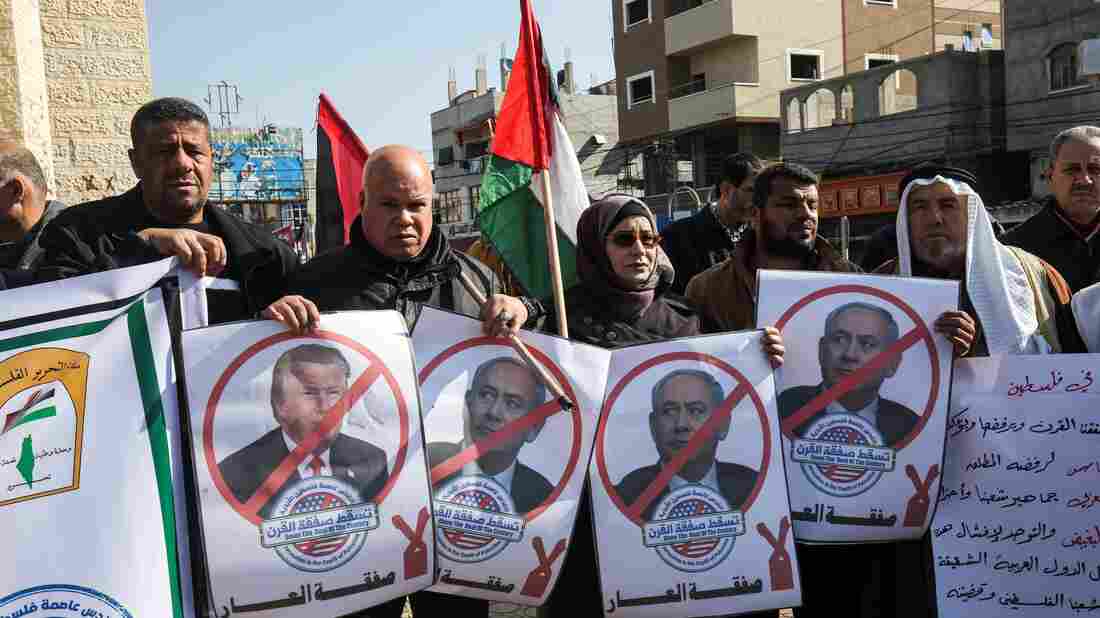 Palestinian demonstrators in Rafah, in the southern Gaza strip, hold portraits of President Trump and Israeli Prime Minister Benjamin Netanyahu during a protest against Trump's announcement of a peace plan on Tuesday. Said Khatib/AFP via Getty Images hide caption 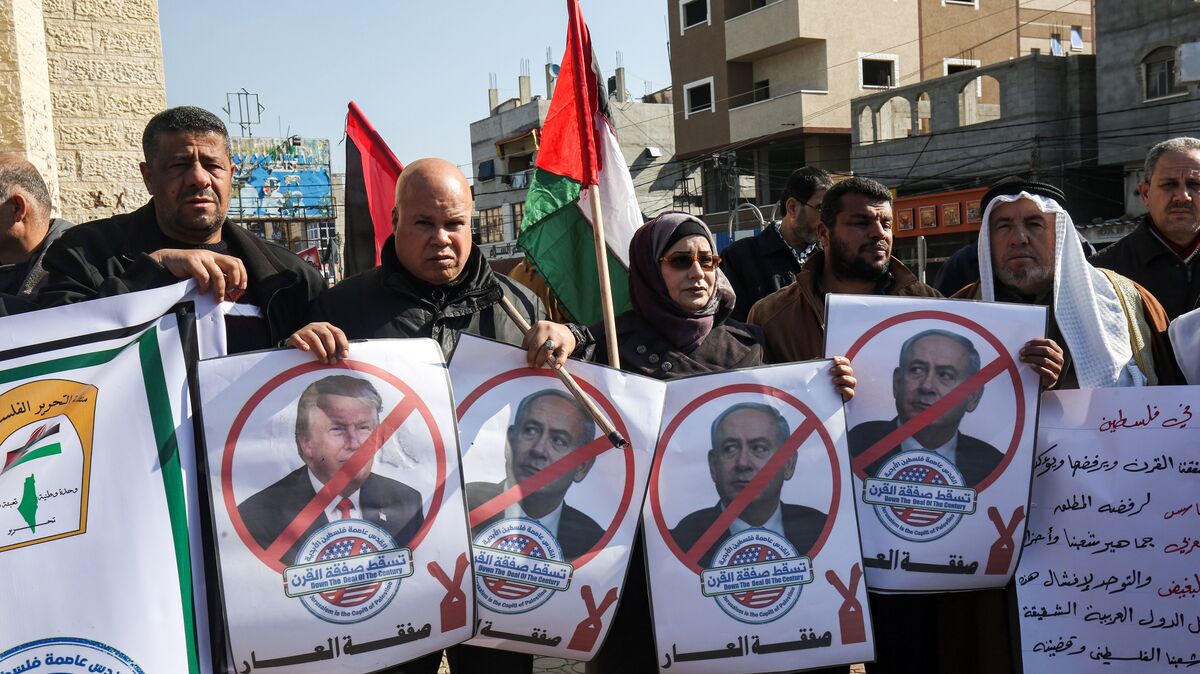 Palestinian demonstrators in Rafah, in the southern Gaza strip, hold portraits of President Trump and Israeli Prime Minister Benjamin Netanyahu during a protest against Trump's announcement of a peace plan on Tuesday.

However, the plan limits the sovereignty of a future Palestinian state. Israel would be in charge of maintaining security over the state of Palestine, which would be "fully demilitarized." The proposal also allows Israel to declare sovereignty over certain areas of the occupied West Bank, including Israeli settlements and the Jordan Valley.

Trump heralded the plan as a "historic breakthrough," even though the Palestinian leadership, which severed relations with the U.S. administration as it took a series of pro-Israel moves, rejected it before the proposal was formally released.

"After 70 years of little progress, this could be the last opportunity they ever have," Trump said at a joint briefing at the White House with Israeli Prime Minister Benjamin Netanyahu. "My vision presents a win-win opportunity for both sides — a realistic two-state solution that resolves the risk of Palestinian statehood to Israel's security."

The U.S. plan has been in the making since the earliest days of Trump's administration, when the president assigned his senior adviser and son-in-law Jared Kushner the task of trying to forge the elusive deal.

Trump lauded his own proposal as far more specific than other peace plans to date. He said it includes a detailed territorial map of the borders showing "territorial compromises [Israel] is willing to make," adding that it marks the first time Israel has authorized the release of such information.

He also said the U.S. would open a new embassy in "Eastern Jerusalem" to the Palestinians.

The Trump administration believes that in addition to the establishment of an independent Palestinian state, this plan could lead to a peace agreement that ends the Israeli-Palestinian conflict.

But Palestinians were outraged by the proposal. Opposition even appeared to unite longtime Palestinian political rivals the Palestinian Authority and Hamas, which governs the Gaza Strip. Palestinian President Mahmoud Abbas chaired an emergency meeting with Hamas, and called it a "new phase of Palestinian dialogue and joint work," according to local media.

Hamas leader Ismael Haniyeh said in a statement that "the new plot against Palestine is doomed to failure and Palestine will vanquish the colonizers at the end." 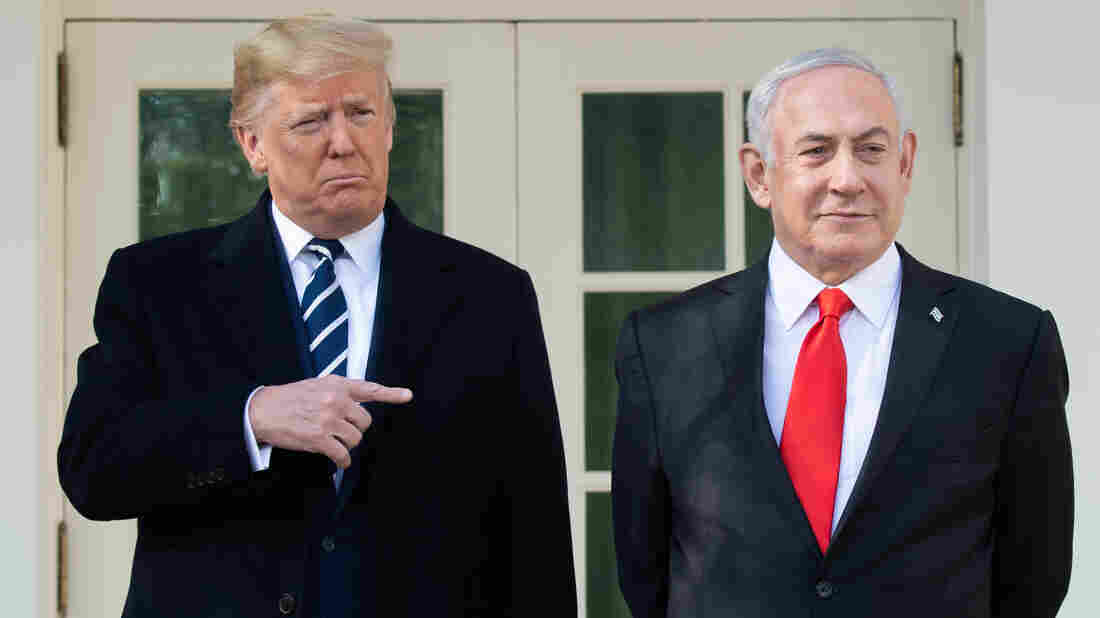 President Trump (left) and Israeli Prime Minister Benjamin Netanyahu speak to the media on the West Wing Colonnade ahead of meetings at the White House on Monday. Saul Loeb/AFP via Getty Images hide caption 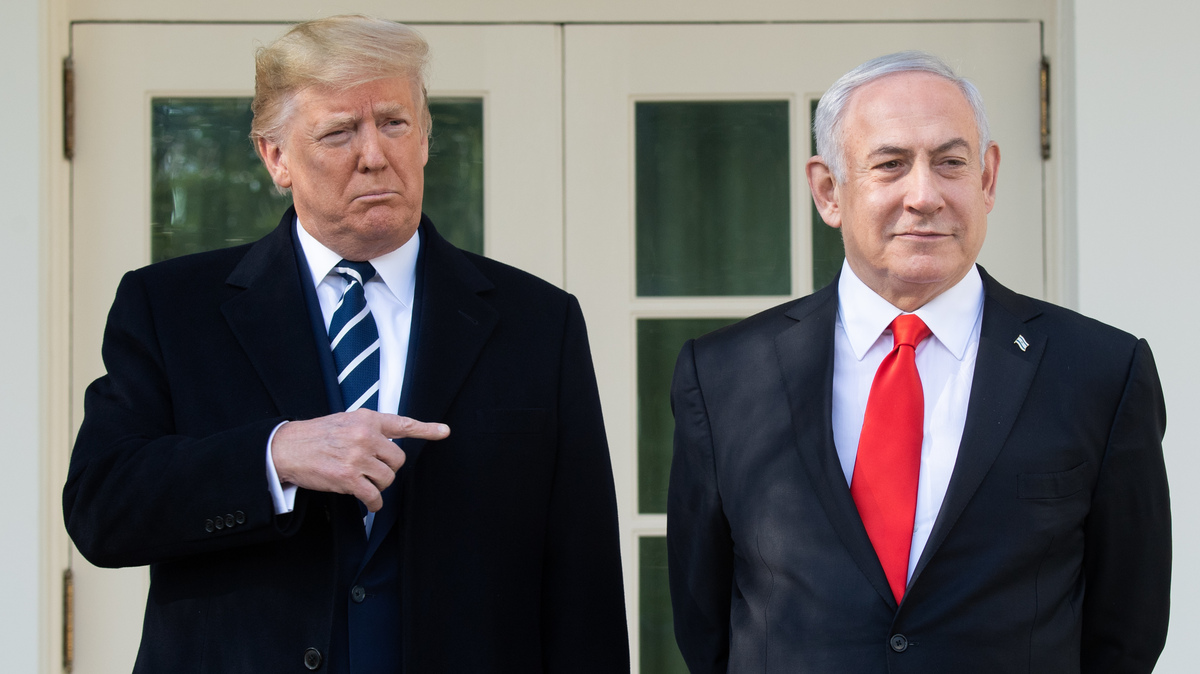 President Trump (left) and Israeli Prime Minister Benjamin Netanyahu speak to the media on the West Wing Colonnade ahead of meetings at the White House on Monday.

On Monday, Trump met separately with Netanyahu and with Benny Gantz, the leader of Israel's Blue and White political alliance, Netanyahu's principal political opponent. Gantz also has expressed his approval of the plan.

Trump said at the time that the Palestinians "probably won't want [the plan] initially," but "I think in the end they're going to want it."

After Trump ordered the U.S. Embassy moved to Jerusalem from Tel Aviv in December 2017, the Palestinians largely broke off relations with the White House. The move, however, proved extremely popular with Israelis.

In June, the White House released the first half of its peace proposal: a $50 billion investment plan billed as a "new vision" for the Palestinian territories. The U.S. made the creation of the investment fund contingent upon Palestinian acceptance of the second, political part of the peace plan, released Tuesday.

Some analysts questioned the merits of the plan. "While Trump claims a revolutionary approach to the peace process, this plan actually recycles past failed efforts: it places Palestinians on probation while they prove their worthiness of statehood, using conditions that are malleable and ill-defined; it seeks to induce Palestinian capitulation through economic largesse; and it removes the onus on Israel to make any concessions until Palestinians declare their full surrender," Tareq Baconi, Israel/Palestine analyst for International Crisis Group, said in a statement.

The proposal comes at a politically fraught moment for both Trump and Netanyahu. Trump is currently on trial in the Senate after he was impeached on charges of abuse of power and obstruction of Congress. Netanyahu was formally indicted Tuesday on criminal corruption charges.

Israel's prime minister "is trying to make this major diplomatic decision, even though his government is a temporary government, in part to shore up support for him domestically as someone who can champion Israel in the international arena," Natan Sachs of the Center for Middle East Policy at The Brookings Institution tells NPR.

Sachs also notes that when U.S. Presidents Bill Clinton and Richard Nixon were facing impeachment, they pushed forward with diplomatic efforts in the Middle East.

The plan includes proposals on several core issues that have been major obstacles to progress in previous attempts to forge a comprehensive peace. They include:

Israeli settlements in the West Bank

In April, Netanyahu pledged to annex West Bank settlements in a move aimed at galvanizing support among his right-wing voter base. He later extended that pledge to include annexation of the Jordan Valley, where Palestinians are seeking an independent state. Late last year, U.S. Secretary of State Mike Pompeo announced that the U.S. does not view settlements as a violation of international law, upending the decades-old U.S. policy that settlements are an obstacle to peace.

Trump said that no Israelis or Palestinians would be uprooted from their homes. According to the plan, Israeli "enclaves," or settlements, "located inside contiguous Palestinian territory will become part of the State of Israel and be connected through an effective transportation system." A map included in the plan shows 15 such enclaves.

The proposal does not stick to Israel's pre-1967 borders and mutually-agreed-on territory swaps as a starting point for peace negotiations — which had been U.S. policy under President Barack Obama and which Netanyahu described as indefensible. Instead, the plan "contemplates a Palestinian state that encompasses territory reasonably comparable in size to the territory of the West Bank and Gaza pre-1967."

Israel would annex the entire Jordan Valley, according to the plan. Areas in a future Palestinian state would include parts of the West Bank, connected to the Gaza Strip through a tunnel. It also would include two areas of desert, connected by a thin passage, near Israel's border with Egypt.

Israel would not need to wait until before taking control of areas allocated to it under the plan, U.S. Ambassador to Israel David Friedman said in a call to reporters.

Palestinians have long sought their own state, and much of the international community has supported that desire. In 2002, then-President George W. Bush called for a Palestinian state as part of his Road Map for Peace. In 2009, Netanyahu supported a "demilitarized" Palestinian state, but by 2015, he had reversed course, declaring his own policy "null and void."

On Tuesday, Trump said he told Abbas in a letter "that the territory allocated for his new state will remain open and undeveloped for a period of four years," in which Palestinians may deliberate and study the deal and "achieve the criteria for statehood."

According to the plan, the U.S. and Israel would judge whether Palestinians have met that criteria.

Those include implementing a governing system that protects certain rights; establishing "transparent, independent, and credit-worth financial institutions"; ending all programs that "promote hate"; achieving "civilian and law enforcement control over all of its territory"; and demilitarizing its population.

It adds that "sovereignty is an amorphous concept that has evolved over time."

The limits that the plan would place on Palestinian sovereignty are particularly clear when it comes to security.

"Israel will have the overriding security responsibility and control over the entire territory, from the Jordan River to the Mediterranean Sea," Friedman told reporters.

Even so, the plan expresses "the aspiration that the Palestinians will be responsible for as much of their internal security as possible."

It also calls for a Palestinian state to be "fully demilitarized." And Israel would have the power to expand its internal security role at any time if it deems the Palestinians are not meeting specific criteria, such as possessing certain weapons.

Both Israelis and Palestinians view the disputed city of Jerusalem as their capital. When the U.S. moved its embassy from Tel Aviv to Jerusalem in 2018, it sparked huge protests by Palestinians.

Under the Trump administration's plan, Jerusalem would remain united and would be the capital of Israel. "We believe that returning to a divided Jerusalem, and in particular having two separate security forces in one of the most sensitive areas on earth, would be a grave mistake," the proposal states.

It envisions the capital of a Palestinian state in portions of East Jerusalem located beyond existing walls, which Israel says it needs for security, that cut it off from the heart of the city. The plan suggests naming it Al Quds, the Arabic word for Jerusalem.

Jerusalem is home to major holy sites for Muslims, Jews and Christians. The status quo for these sites would be preserved, including Jordan's role as custodian of the Muslim sites.

Some 750,000 Palestinians were displaced during the 1948 Arab-Israeli war. More than seven decades later, Israel denies first-generation Palestinian displaced persons and their descendants the right to return to communities from which they had been expelled or had abandoned.

Under the plan, "there shall be no right of return by, or absorption of, any Palestinian refugee into the State of Israel." Rather, the refugees would be absorbed into a Palestinian state or integrated into their current host countries. Additionally, up to 50,000 Palestinians may be accepted by Organization of Islamic Cooperation member countries.

The proposal also will "endeavor to raise a fund to provide some compensation to Palestinian refugees," without specifying where the money might come from.