Accessibility links
Migrants In Mexico Face Crackdown, But Officials Say They're Being 'Rescued' Much of Mexico's official language regarding migration remains euphemistic, critics say, even as migration policies have grown harsher. More than 2,000 Central Americans have been deported this month. 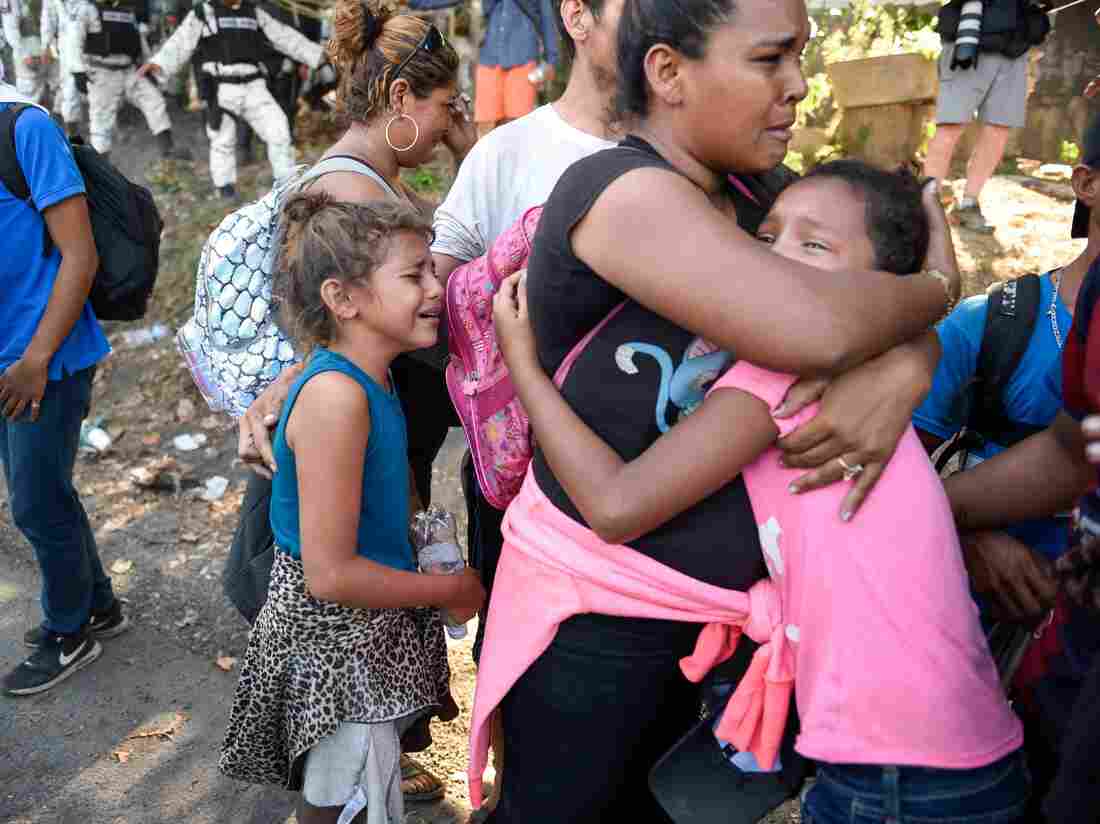 A Central American migrant family reacts after members of the Mexican National Guard prevent them from continuing on their way in Ciudad Hidalgo, Chiapas State, Mexico on Jan. 23. Alfredo Estrella/AFP via Getty Images hide caption 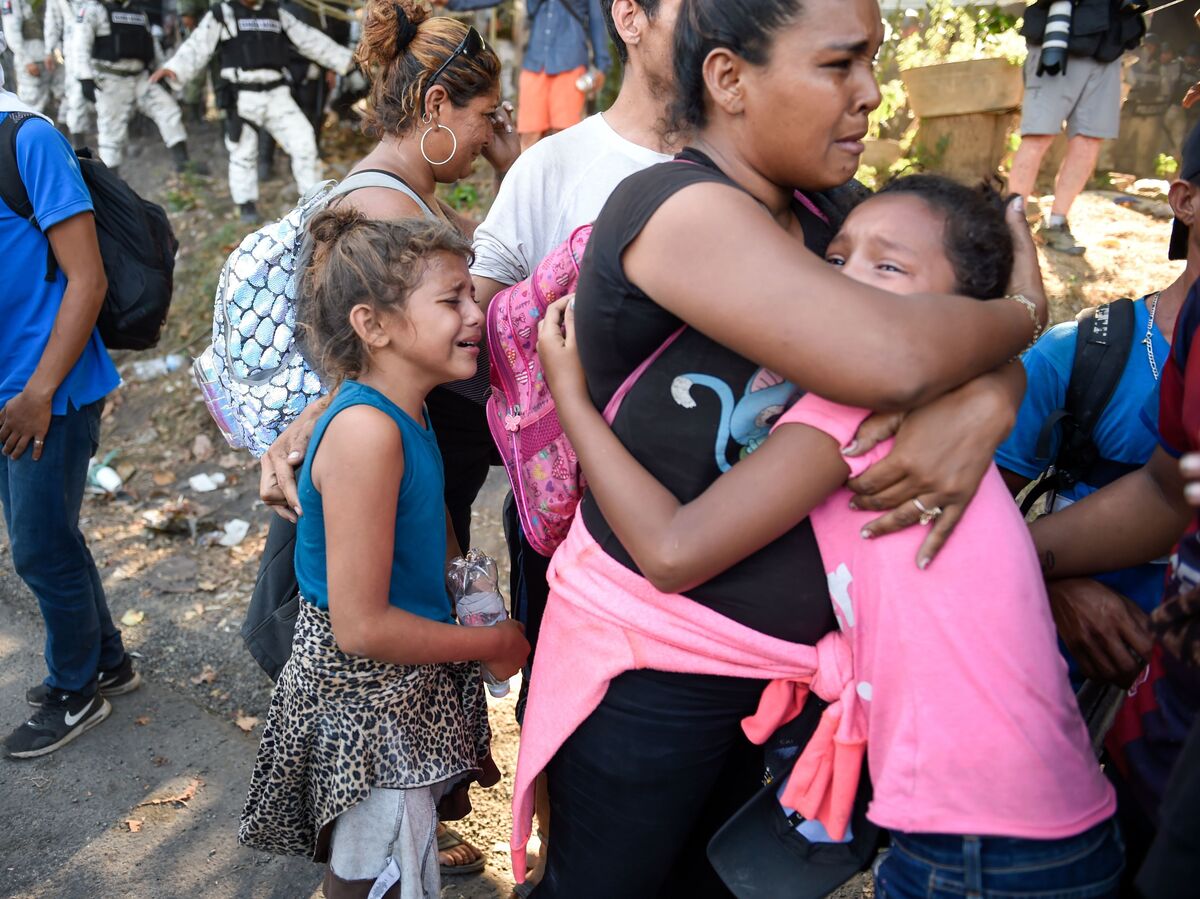 A Central American migrant family reacts after members of the Mexican National Guard prevent them from continuing on their way in Ciudad Hidalgo, Chiapas State, Mexico on Jan. 23.

The last two weeks have been busy for Mexico's immigration authorities. Since Jan. 18, the Mexican government says it has "assisted returns" of 2,303 Central American migrants back to their home countries.

"Assisted returns" means deported — but much of the official language referring to migration in Mexico remains euphemistic, critics say, even as the government's migration policies have grown harsher.

Mexico has been under pressure from the Trump administration, with threats of tariffs and sanctions, to do more to stop U.S.-bound migrants. Last week, Acting Deputy Secretary of Homeland Security Ken Cuccinelli praised Mexico for its most recent efforts.

Nearly all those deported were Honduran, and most were part of a large caravan that had entered Mexico illegally, with hopes of reaching the U.S. Mexican officials say all the deportations were done according to law and with full respect for human rights.

Advocates for migrants dispute this and say they are worried about Mexico's new, increasingly draconian policies toward those fleeing chronic poverty and violent gangs. But the toughness of these policies isn't immediately obvious when listening to the language used by Mexican officials, including President Andrés Manuel López Obrador. 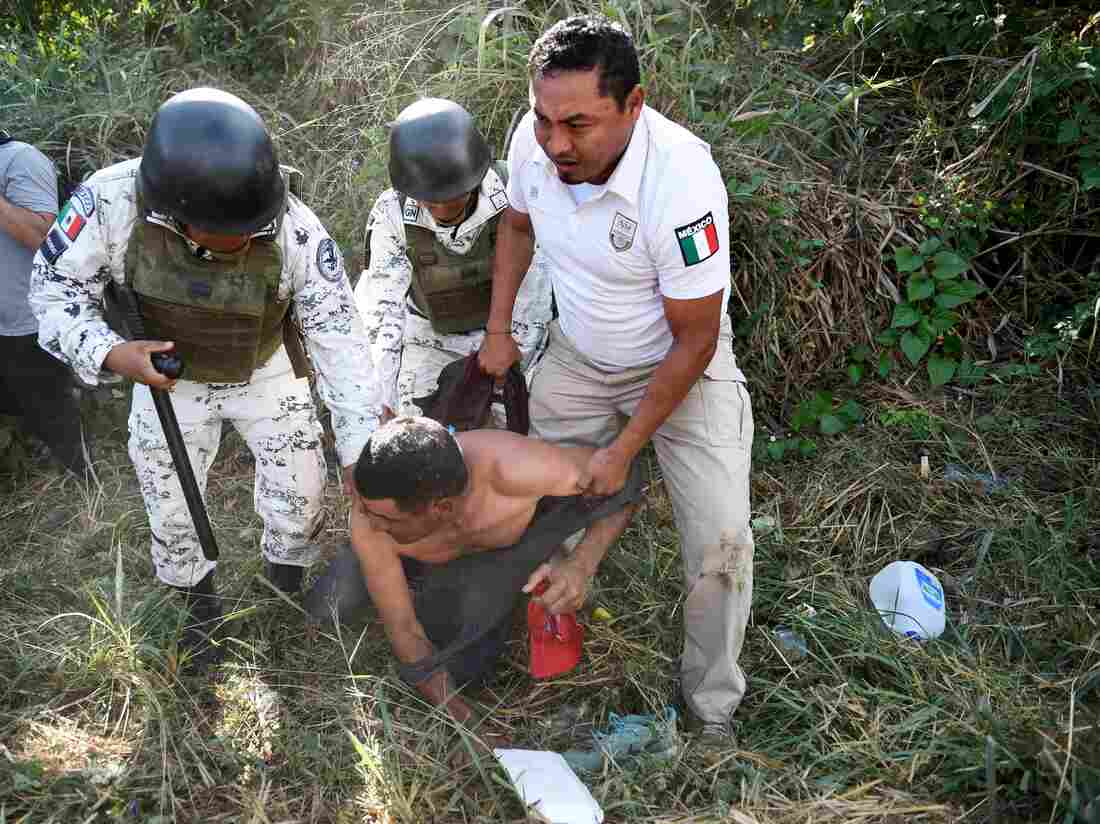 Members of the Mexican National Guard and officers of the Migration Institute detain a Central American migrant heading in a caravan to the U.S. in Ciudad Hidalgo, Chiapas State, Mexico, on Jan. 23. Alfredo Estrella/AFP via Getty Images hide caption 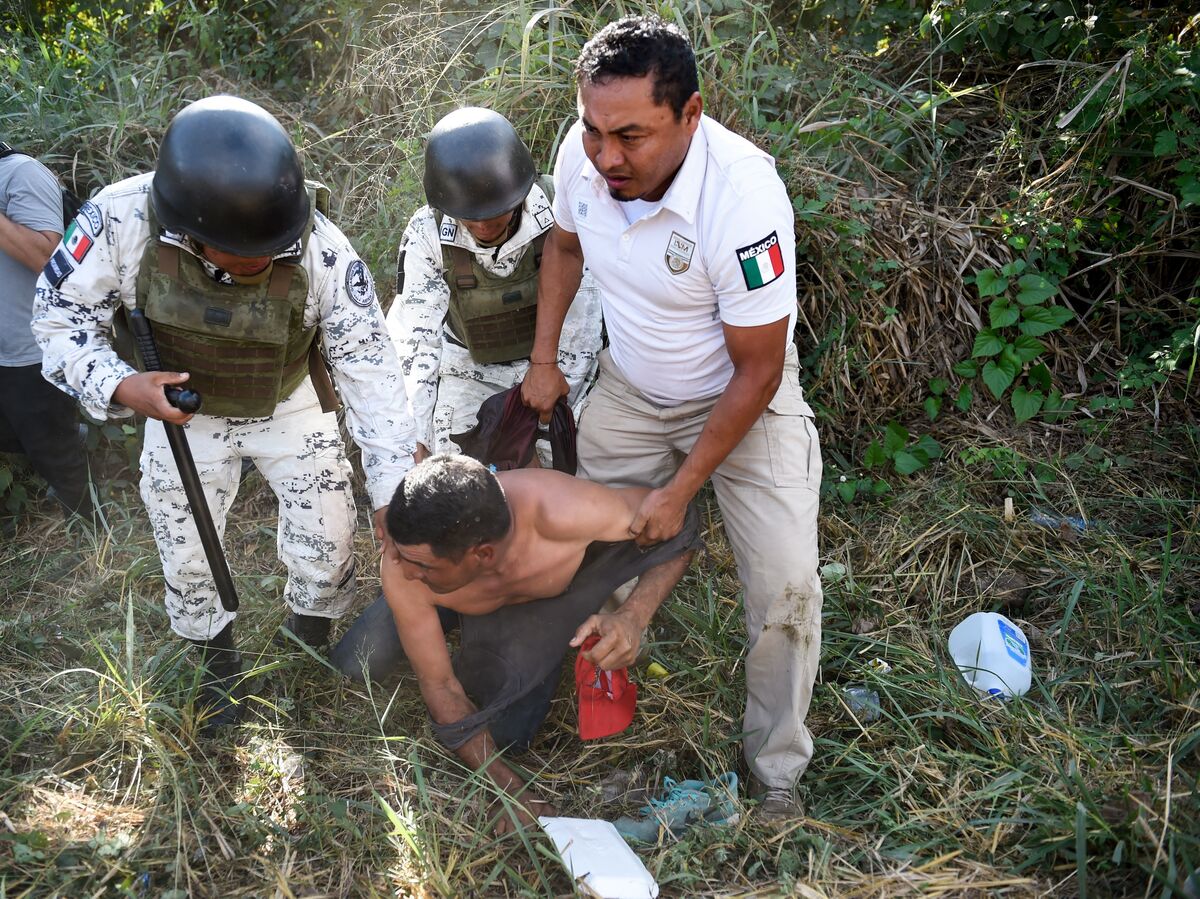 Members of the Mexican National Guard and officers of the Migration Institute detain a Central American migrant heading in a caravan to the U.S. in Ciudad Hidalgo, Chiapas State, Mexico, on Jan. 23.

Last week, the day after Mexican troops rounded up a group of 800 migrants who had crossed the shallow Suchiate River from Guatemala into Mexico, Ebrard interrupted a reporter who asked how many migrants Mexico had detained.

"They are not detained," Ebrard insisted. "They are in migration stations."

That's the euphemism the government uses to refer to migrant detention centers. Such wording has been common for years, but critics say it is more jarring now, given Mexico's hardening of migration policy.

According to Ebrard and the National Migration Institute, migrants are not arrested or detained — they are "rescued." Deportations are "assisted returns," which most of the time — officials say — are voluntary.

"Their language often doesn't match reality," says Eric Olson, a global fellow at the Wilson Center in Washington, D.C. "There are times when migrants are given no option but to sign 'voluntary' departures or are essentially forced to accept 'assisted returns,'" he says. 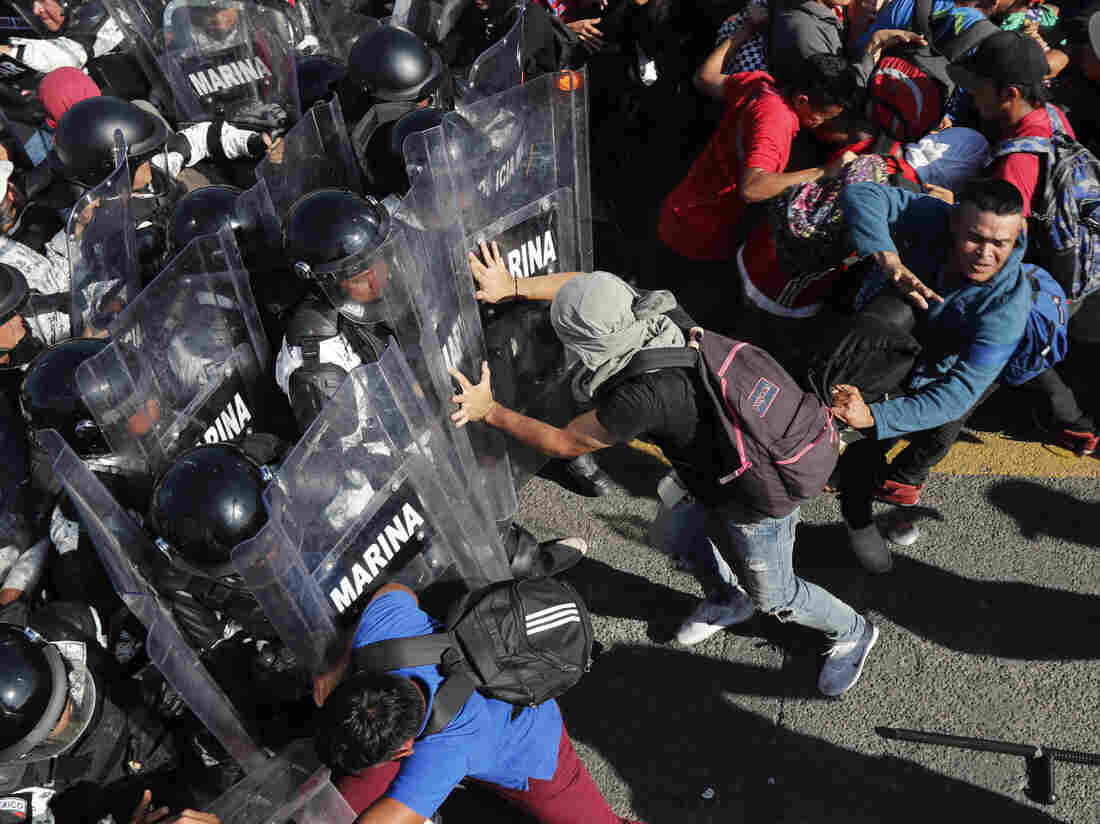 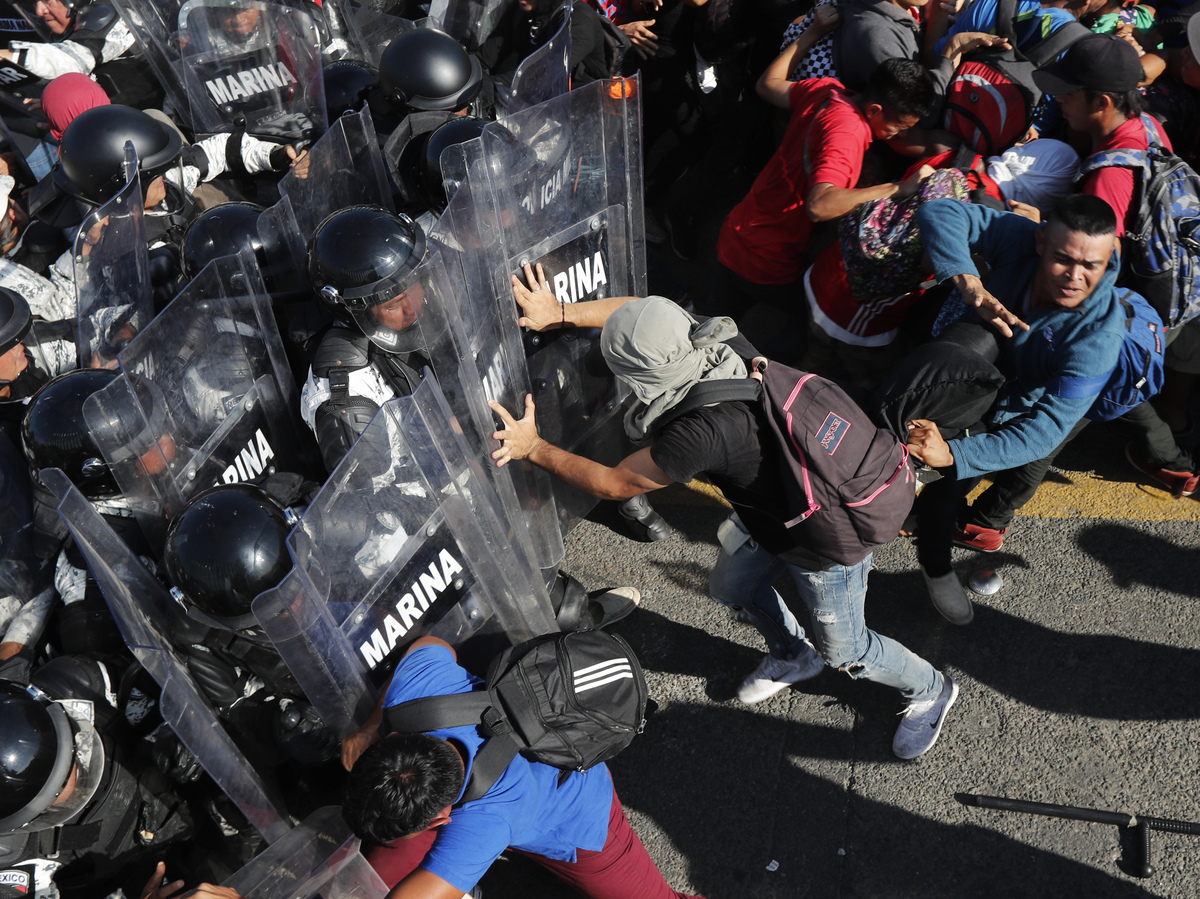 Migrants charge on Mexican National Guard troops at the border crossing between Guatemala and Mexico, near Ciudad Hidalgo, Mexico and Tecun Uman, Guatemala, on Jan. 18.

Olson, who has been visiting Mexican detention centers for the past eight years, says it is clear that migrants in Mexico cannot move around freely and have limited communication. The centers "are essentially detention facilities, although Mexican authorities do not like to use that language," he says.

Mexico is sensitive to the way it is perceived in treating migrants. For decades, the government publicly criticized the U.S. for its handling of Mexican migrants, many of whom crossed illegally into the country. López Obrador campaigned on creating a more humane policy for migrants in Mexico.

But critics say the government's euphemisms are masking human rights abuses — especially in recent days, when reports of National Guard troops chasing down migrants and dousing them in pepper spray have been splashed across newspapers and on prime-time news shows.

Migrant advocates say it's cruel for authorities to continue to refer to those incidents as "rescuing" migrants.

Some critics of the government's crackdown say they are being silenced. Porfirio Muñoz Ledo, a veteran lawmaker from the president's own party, was blocked by other party members from speaking in Mexico's Congress last week about what he later described as "savage aggression" against the migrants by National Guard troops. He tried to show video of the border clashes, but was stopped.

Activists at the Fray Matías de Córdova Human Rights Center in Tapachula, Chiapas, say they have been barred from entering a large detention facility in the southern border city. They have provided free legal assistance to migrants in the facility for two decades.

Based on past visits, "Conditions inside are bad, it lacks good hygiene, there is physical mistreatment of migrants and lack of medical care," says Salva La Cruz, an activist with the center.

La Cruz says immigration authorities notified the human rights center that it would no longer have access to the detention facility because it had not acted professionally or respected operating hours. La Cruz denies the accusation and says his group is appealing the ruling.

"The government is using this doublespeak to control their image," he says. "They are obsessed with providing results to the U.S. irrespective of people's human rights."

The National Migration Institute and Ebrard's office did not respond to NPR's requests for comment.

It doesn't appear that criticism over treatment of migrants has hurt López Obrador's popularity. Polls show he maintains high approval ratings and surveys show a hardening of Mexican attitudes toward migrants.

In a poll earlier this month, a majority said Mexico should pressure migrants to return to their respective countries. About a third said migrants should be protected and given humanitarian aid.

Alethia Fernández de la Reguera, who researches immigration at the National Autonomous University of Mexico's Legal Studies Institute, worries the language used by the Mexican government is manipulating public opinion. She says that detention centers in the country are housing migrants longer and under harsher conditions than even in Mexico's prisons.

"They are lying and confusing everyone," she says. "This new government is still saying they are promoters of human rights ... but there is a big contradiction about what they say and what is happening."