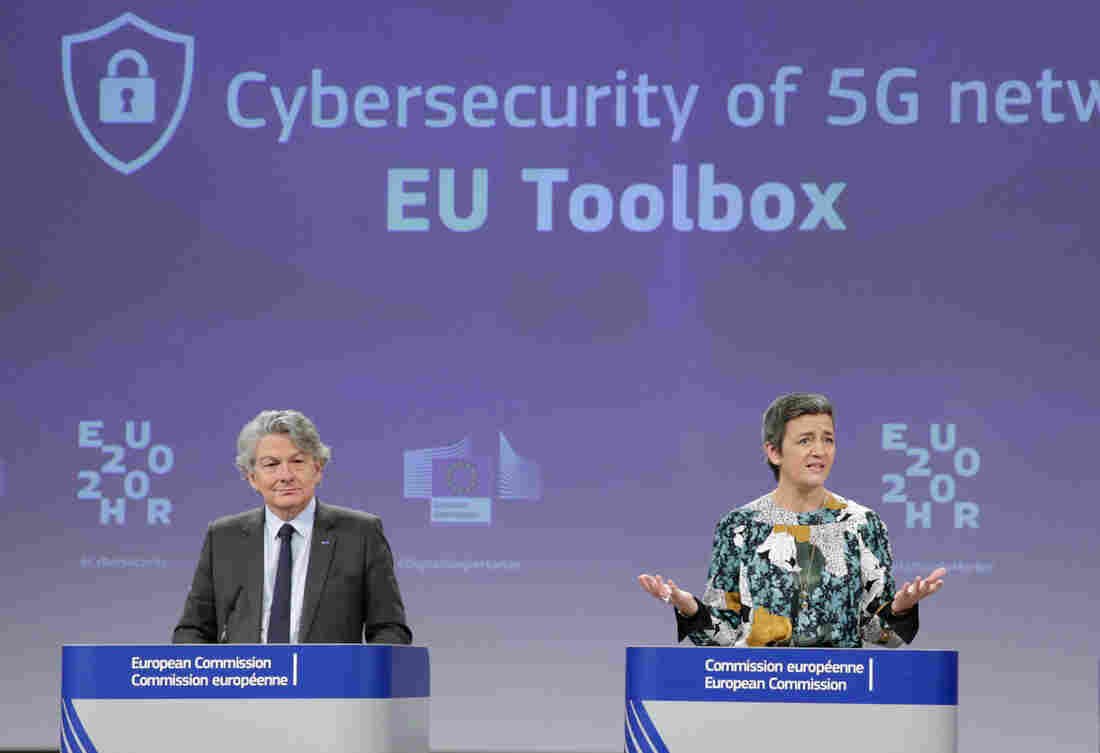 Two European Commission officials, Thierry Breton (left) and Margrethe Vestager (right), give a press conference on 5G security Wednesday in Brussels. The EU recommended that member states screen telecom firms, but did not call for banning any by name. The Chinese telecom Huawei said it welcomed the decision and hopes to take part in building 5G networks in Europe. Aris Oikonomou/AFP via Getty Images hide caption 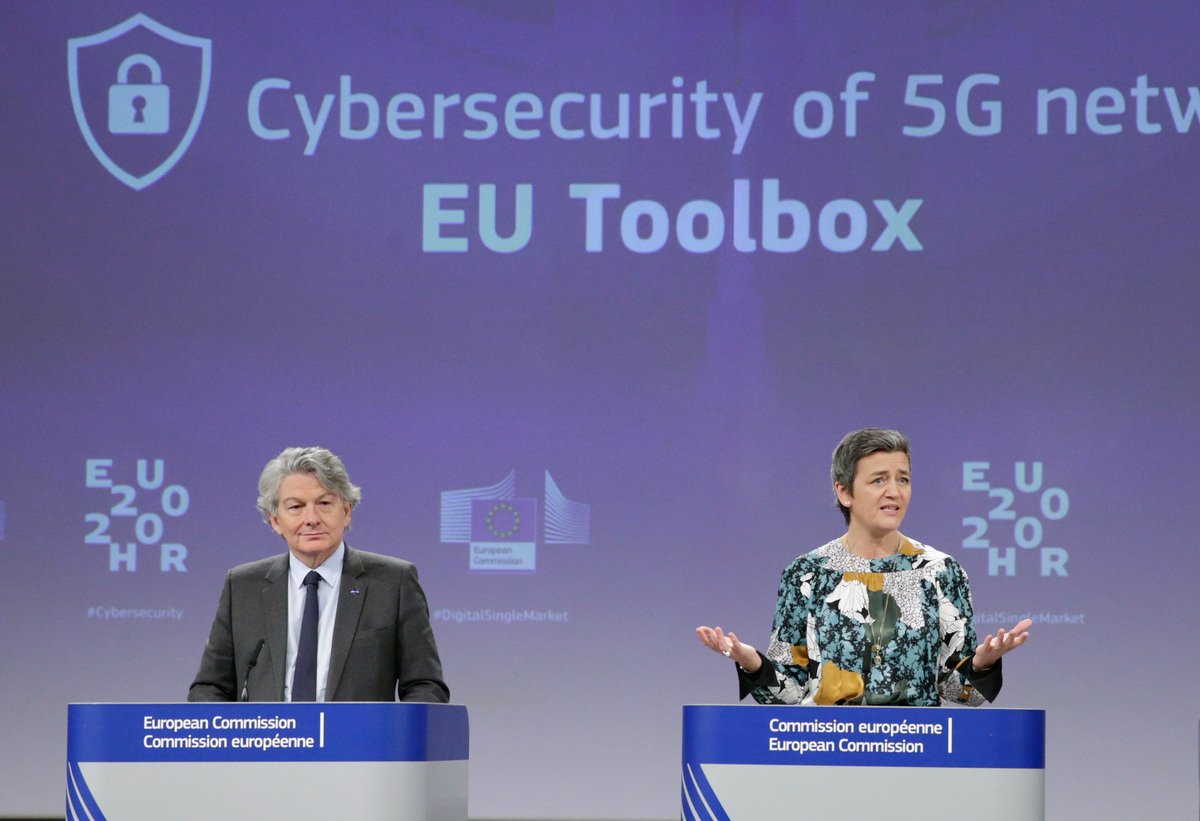 Two European Commission officials, Thierry Breton (left) and Margrethe Vestager (right), give a press conference on 5G security Wednesday in Brussels. The EU recommended that member states screen telecom firms, but did not call for banning any by name. The Chinese telecom Huawei said it welcomed the decision and hopes to take part in building 5G networks in Europe.

When it comes to U.S. national security, one foreign company sets off alarm bells like no other: Huawei, the Chinese telecom giant.

Huawei scored a key victory, and the U.S. suffered a significant setback, when the company received the green light to build up to 35% of Britain's 5G cellular phone network.

"This is a major loss for American national security, foreign policy and technology policy," said Peter Singer of the New America think tank in Washington.

The Trump administration has lobbied hard with U.S. allies, urging them not to buy from Chinese firms.

"It's critical that European countries not give control of their critical infrastructure to Chinese tech giants," Secretary of State Mike Pompeo wrote last month in an op-ed for Politico. "Just consider Huawei's track record. ... It is implicated in espionage in the Czech Republic, Poland and the Netherlands, [and] has allegedly stolen intellectual property from foreign competitors in Germany, Israel, the United Kingdom and the United States.

David Edelman was on the National Security Council under President Obama and now runs MIT's Internet Policy Research Initiative. He puts it this way: "The administration's case goes like this. They say first that Huawei equipment is generally less secure than its competitors. Second, that Chinese security services might find it irresistible to try to steal secrets. Third, and maybe most dramatically, if there were ever a major conflict, Beijing might use that access to remotely shut down critical systems."

Britain says it decision is based in part on working with Huawei for years on its existing cellular system. Britain also believes it can manage the risk by limiting Huawei to the periphery of the new network — things like base stations and antennas that mostly pass on data — and keeping it away from the more sensitive network core.

This 5G network hasn't yet been built, and the U.S. hasn't yet given up making its case. Pompeo was in Britain on Wednesday and said he would continue to stress U.S. security concerns.

"The real question here is whether we've crossed a particular Rubicon, whether by having this Chinese content in the underlying 5G network, that effectively it's a decision that can't be reversed," Edelman said.

Which brings us to the second big issue — the global technology competition.

For many in the West, China is viewed as a giant factory that puts together iPhones. But the latest development means it's now been cleared to help build a cutting-edge network in Western Europe.

5G is being billed as revolutionary. Data will move a lightning speed, driverless cars will communicate with each other, doctors will perform surgery remotely. And China is now considered at the forefront.

"China is today a major player in the technology market," said Beau Woods, who studies cyber issues at the Atlantic Council in Washington. The British decision, he added, "is a big win for China's prestige and also kind of puts other nations, other companies, on notice that China's not just the packaging and assembly hub of the world anymore."

China's stated goal is to be a world leader in the most important technologies of the 21st century. To this end, the government supports Huawei and other tech companies in ways that Western countries don't, said Dean Cheng with the Heritage Foundation.

When it comes to 5G, he said, Huawei offers the complete package, something Western firms can't match at this point.

"They offer essentially soup to nuts," Cheng said. "That's a huge advantage in terms of the whole system being integrated. It presumably works well with each other. Also, it is significantly cheaper than any of the partial competitors out there."

All this makes it harder on the third big issue — U.S. foreign policy. The Trump administration has pressed American allies to keep Chinese hardware out of their sensitive networks. The results have been mixed at best.

"If you're not getting your closest intelligence partners on board, how can you expect to get the rest of Europe or Latin America, Africa?" Peter Singer asked. "The thing to watch for is the dominoes falling. All the other states that have been holding back, may be saying, 'OK, the Brits are going this way now. We can, too.'"

Just a day after the British decision, the European Union on Wednesday recommended limiting, but not banning, "high-risk" companies. Huawei said it welcomed the decision and hopes to be part of a fast, secure 5G network across Europe.