Accessibility links
Journalist Gwen Ifill Honored With Black Heritage Forever Stamp The veteran reporter, who died at the age of 61 after battling cancer, will be memorialized on a new U.S. Postal Service Forever stamp. 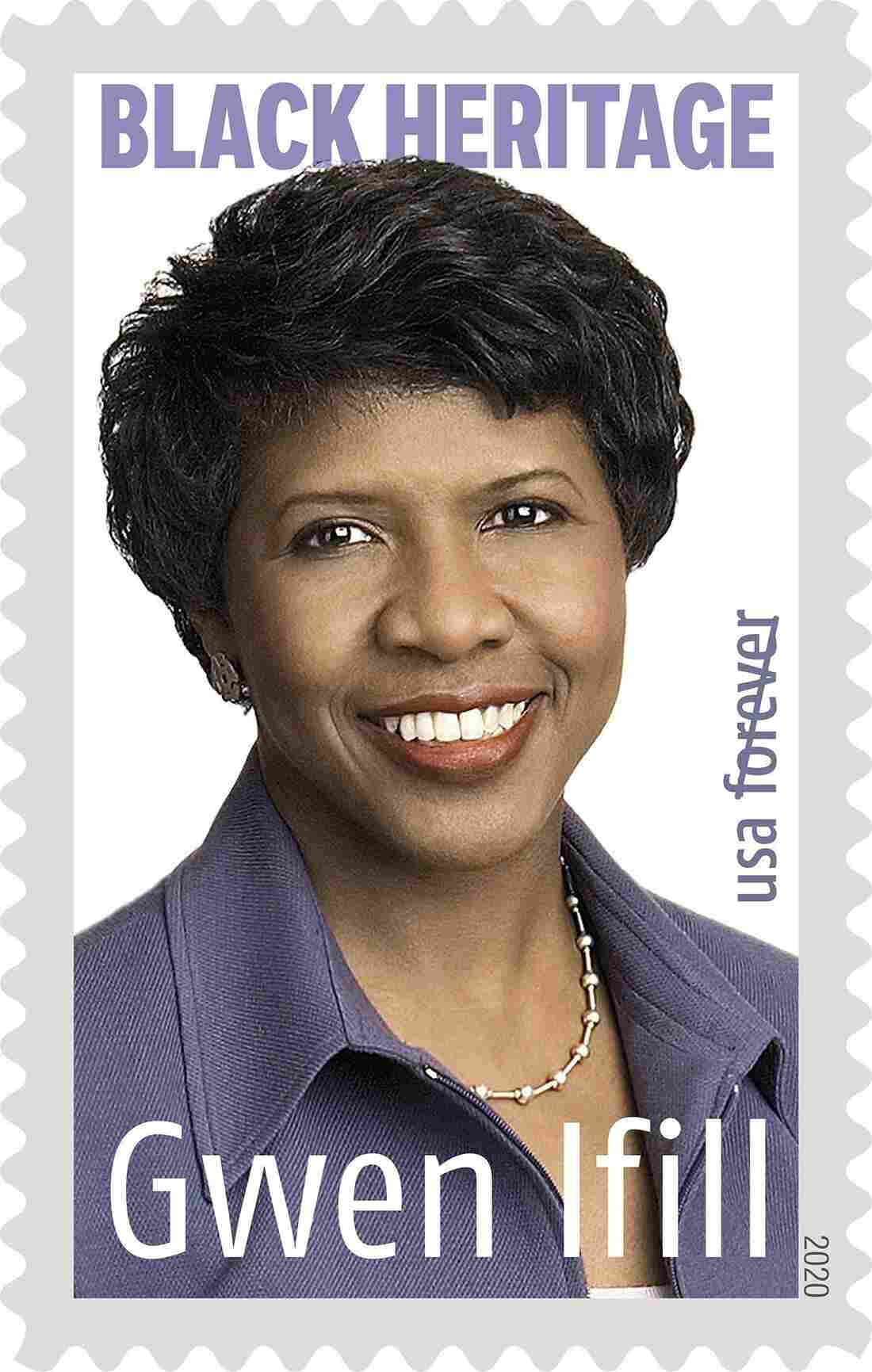 Gwen Ifill, one of the nation's most esteemed journalists, will be the face of the U.S. Post Office 43rd stamp in the Black Heritage series. USPS via AP hide caption 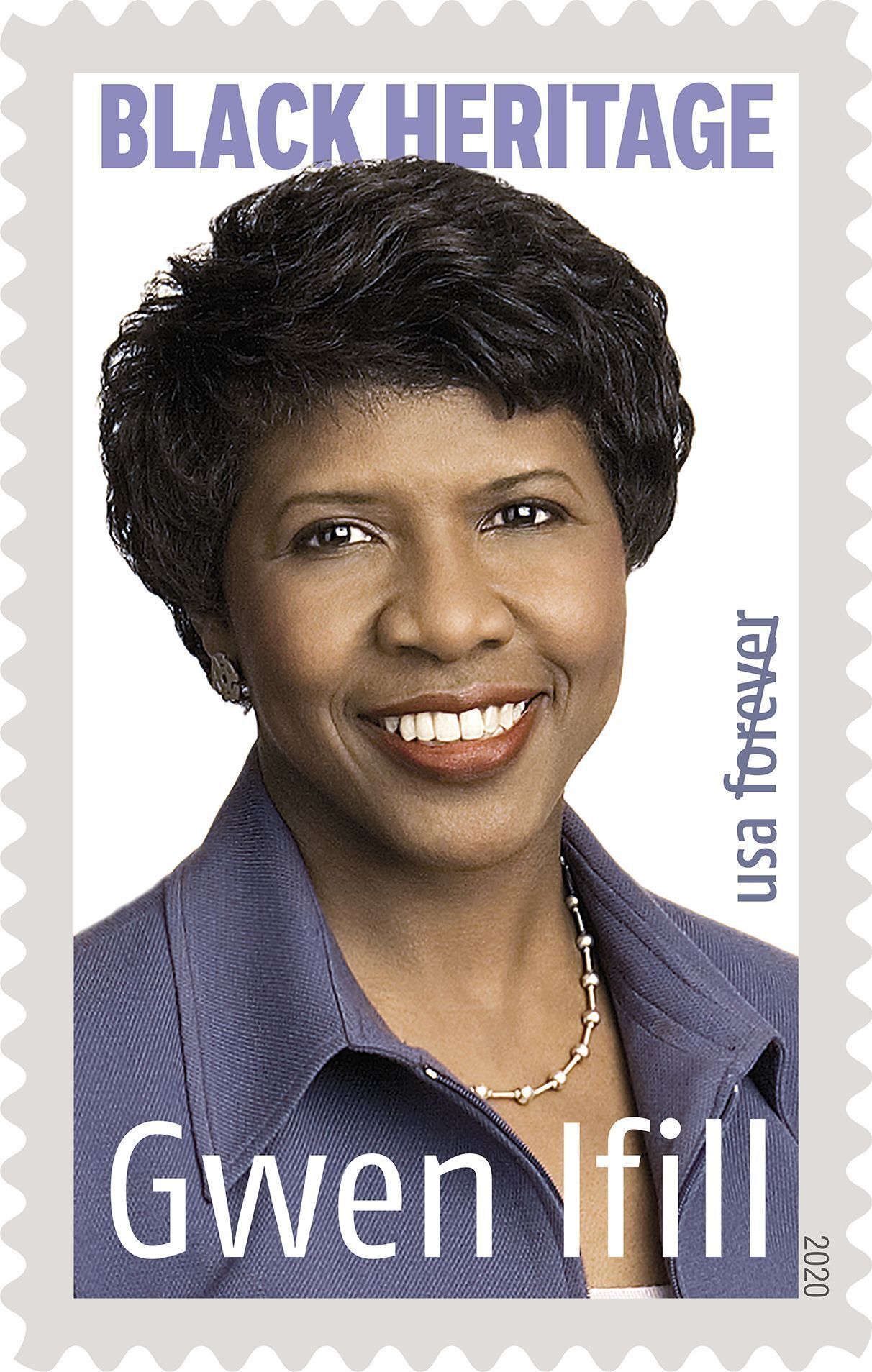 Gwen Ifill, one of the nation's most esteemed journalists, will be the face of the U.S. Post Office 43rd stamp in the Black Heritage series.

Gwen Ifill didn't want it to be a big deal.

The legendary journalist knew she'd served as a trailblazer for women and especially a beacon of what is professionally possible for women of color. But in an interview with The New York Times, she said she was eager for the days when it would not seem "like any breakthrough at all" for a black woman to be anchoring a national news program.

And yet, more than three years after her death, Ifill is still making breakthroughs. This time, on a stamp.

Ifill, who died at the age of 61 after battling cancer, will be memorialized on a new U.S. Postal Service Forever stamp. She'll be the 43rd stamp in the Black Heritage series.

It features a photo of her taken in 2008 by photographer Robert Severi. She looks relaxed, her smile reassuring and her gaze direct and friendly. Essentially, the same image she projected into living rooms for decades as the host of some of television's most respected news programs.

"She touched my life because she was a damn good reporter," Allison Davis, one of the founders of the National Association of Black Journalists told NPR. "She is what everybody should aspire to be."

Ifill started out writing for newspapers at a time when it was rare to have a black woman in the newsroom — the late 1970s.

"I came to work one day and found that someone had left at my workspace a little note that said [expletive] go home," Ifill recalled of her time as a college intern at the The Boston Herald in the Makers documentary.

She went on to work for the Baltimore Evening Sun, The New York Times and The Washington Post before transitioning to broadcast journalism.

"She developed a reputation as a tough, incisive reporter who was serious about the work but never took herself too seriously. She achieved a lot of firsts. In 1999, she became the first black woman to host a national political talk show on TV - PBS' 'Washington Week In Review.' She was the first black woman to moderate a vice presidential debate in 2004, returning for the 2008 VP debate.

The postal service receives about 40,000 suggestions for commemorative stamps each year. But only a handful of them actually make it to the post office.

While Davis says a woman of Ifill's influence is deserving of the national honor, she says she resents somewhat that the gestures to honor important African Americans are made primarily made in February, Black History Month.

"She's historical, and she should be honored all the months of the year. Because that's the incredible legacy she leaves," Davis said of Ifill.

The Ifill commemorative stamp will be issued on Thursday.