Accessibility links
Colorado Tries To Get Skiers Out Of Cars And Onto Buses To Tamp Down Traffic Denver has great skiing nearby, but traffic congestion can ruin weekend trips. Resorts are subsidizing ski buses, but so far it hasn't panned out as the solution. 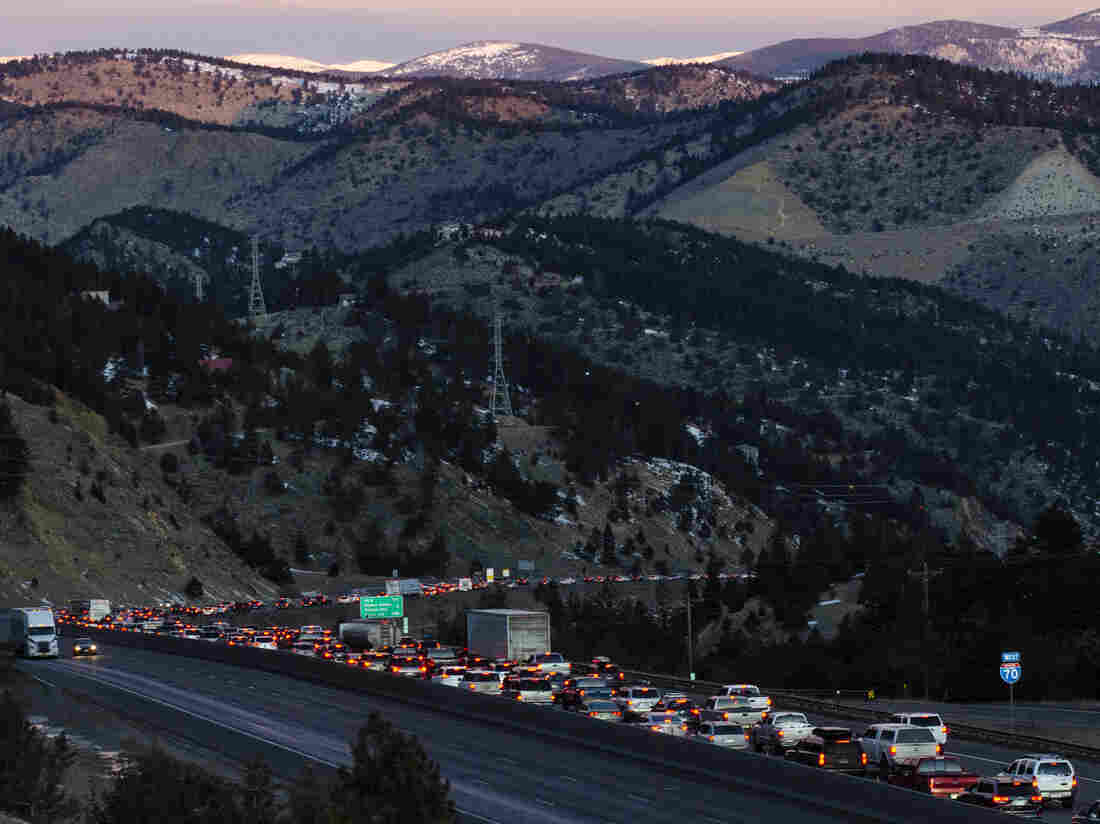 Interstate 70 west of Denver is backed up with ski traffic on Jan. 18. Coloradans make this powder pilgrimage every weekend, and traffic has gotten worse. Nathaniel Minor/Colorado Public Radio hide caption 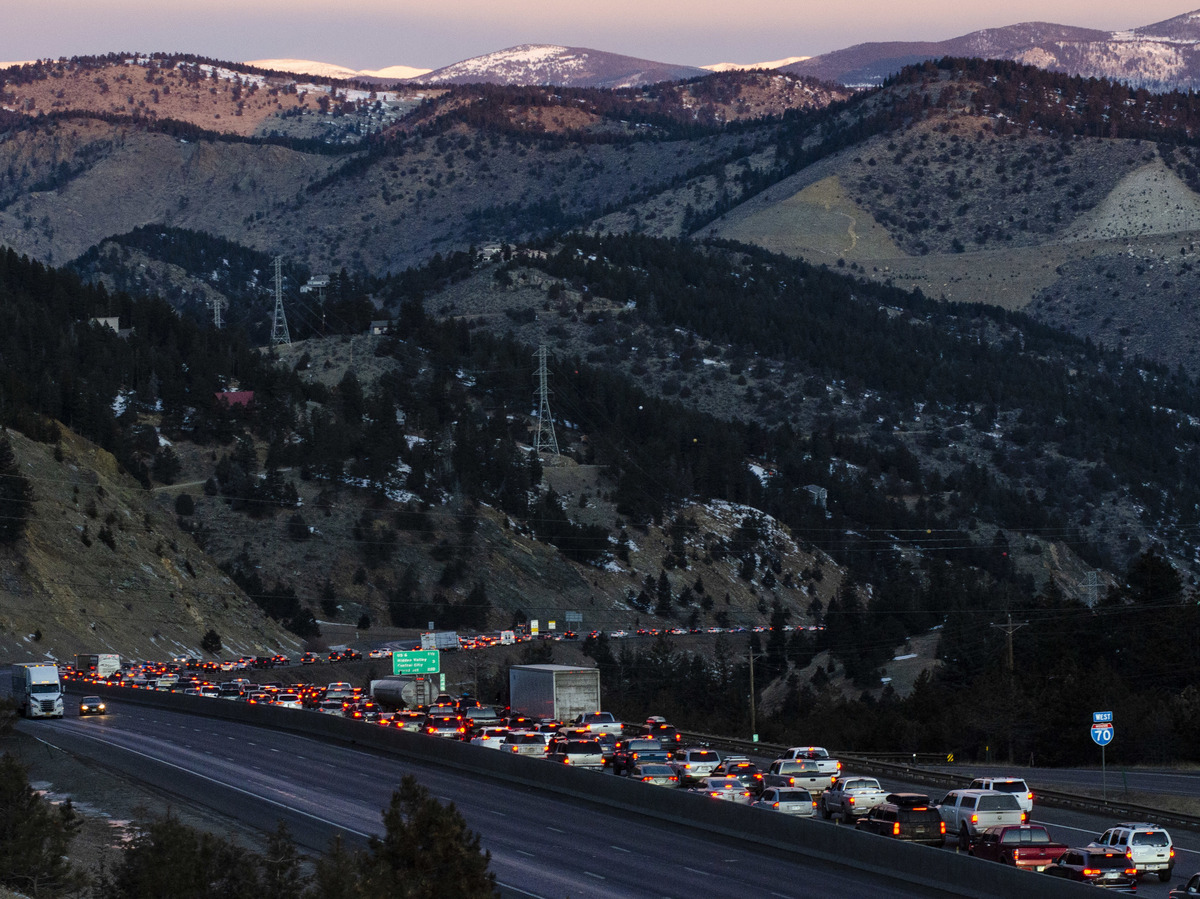 Interstate 70 west of Denver is backed up with ski traffic on Jan. 18. Coloradans make this powder pilgrimage every weekend, and traffic has gotten worse.

More than a half-dozen world-class ski resorts are less than 100 miles west of Denver. The trouble is that they're also some of the most popular — and there's really only one road to get to them: the dreaded Interstate 70.

Idaho Region Wants Skiing To Be Affordable For All

Idaho Region Wants Skiing To Be Affordable For All

Travel time to this ski area just 60 miles west of Denver has increased by an average of 15 minutes since 2014, according to state data. On Martin Luther King Jr. Day weekend in 2019, more than 175,000 vehicles traveled this section of I-70. Travel time to Denver can reach three hours — or longer.

"Last year, when our family went skiing in Vail, it took six hours to get back on a Sunday night," said Gov. Jared Polis.

So the Colorado Department of Transportation has partnered with three ski resorts, including Loveland Ski Area, to run round-trip buses on weekends. Because buses are more efficient than cars at moving large numbers of people on a tight, winding two-lane highway, state officials hope they'll take enough cars off the road to alleviate some congestion.

"It was great. I think it's the future," said Mohan, a first-time bus rider.

But Colorado's bus fleet, with a capacity of about 500 passengers in a weekend, isn't big enough to have a noticeable effect on traffic just yet. And since launching in December of last year, they're running less than half full. Bob Wilson, spokesman for the Colorado Department of Transportation, said it takes time to build up ridership. 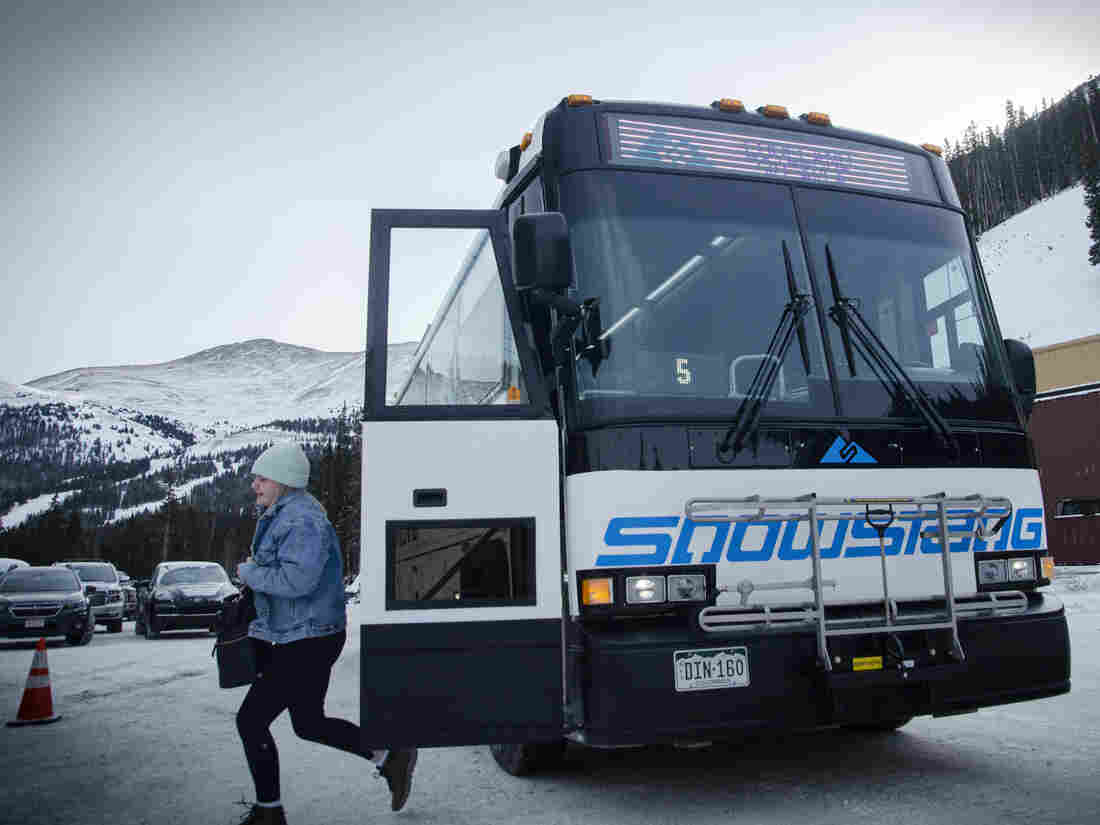 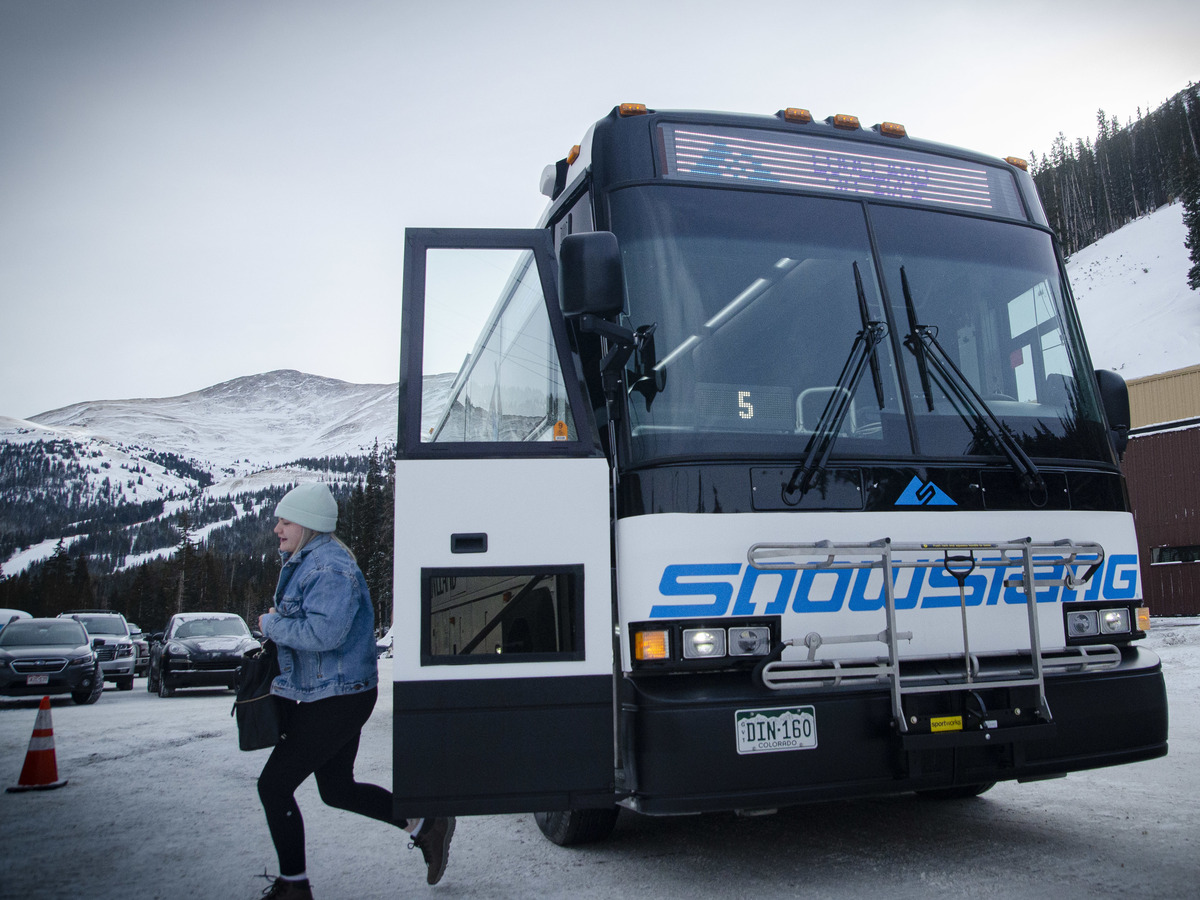 A woman steps off the Colorado Department of Transportation's Snowstang bus at Loveland Ski Area. The department has partnered with three ski resorts to run round-trip buses on weekends.

"What we're hoping for is for the program to expand," Wilson said. "And the more cars, more vehicles, we can get off the roadway, the better it's going to be. Even if it's a small dent, it's a dent nonetheless."

Fares start at $25 round trip and are subsidized by resorts to keep them low.

"We're trying to be part of the solution," said John Sellers, marketing director at Loveland Ski Area. "Every person that gets on that bus essentially reduces a vehicle on I-70 and opens up another spot in our parking lot."

But that price was not quite low enough for Kyle Helm of Denver.

"We did a little bit of calculation as far as like how much money we spend on gas to get up here," he said. "And we have a dog that we take. If it weren't for the dog, we'd probably take it."

There is more than just gas prices to consider. Using the Internal Revenue Service's mileage rate, which factors in things such as wear and tear, it costs about $70 to drive to Loveland and back.

But driving is deeply ingrained here, from the flexibility that cars give to the party atmosphere in resorts' parking lots. Even at 9 a.m. on a Saturday, scores of skiers and snowboarders were sipping craft beers and smoking marijuana.

"Buses aren't usually for me," said Clay Briar of Golden, Colo., because cars give him space for "extracurricular activities."

Emily Maynard was sipping a canned vodka cocktail in the back of a Buick. She and her friend Lauren Feathers said the bus intrigued them, but Maynard said, "I don't want to sit in that traffic that long."

Colorado is not alone in dealing with ski traffic. The canyons outside Salt Lake City can jam up on weekends and powder days as well. One resort there began charging parking fees this season to incentivize using public transit. A resort outside Boulder, Colo., pulled back on a similar plan in 2018 after intense public pushback.

Briar and other skiers said they'd love to take a train to the mountains — those wouldn't get stuck in bad weather and would operate outside traffic completely, they argue. But there are no active plans to build a passenger train service of any sort along I-70. One previous study of different types of trains from Denver to the Vail area estimated it could cost $10 billion to $32 billion.

So for now, skiers will have to be content to wait — either in their cars or on buses.

"I guess it's just the price you pay to ski," Feathers said.