Accessibility links
How Does The Iowa Caucus Work? Iowa has only 1% of the delegates up for grabs for the Democratic nomination, and yet the candidates have spent $50 million there on ads for a reason. 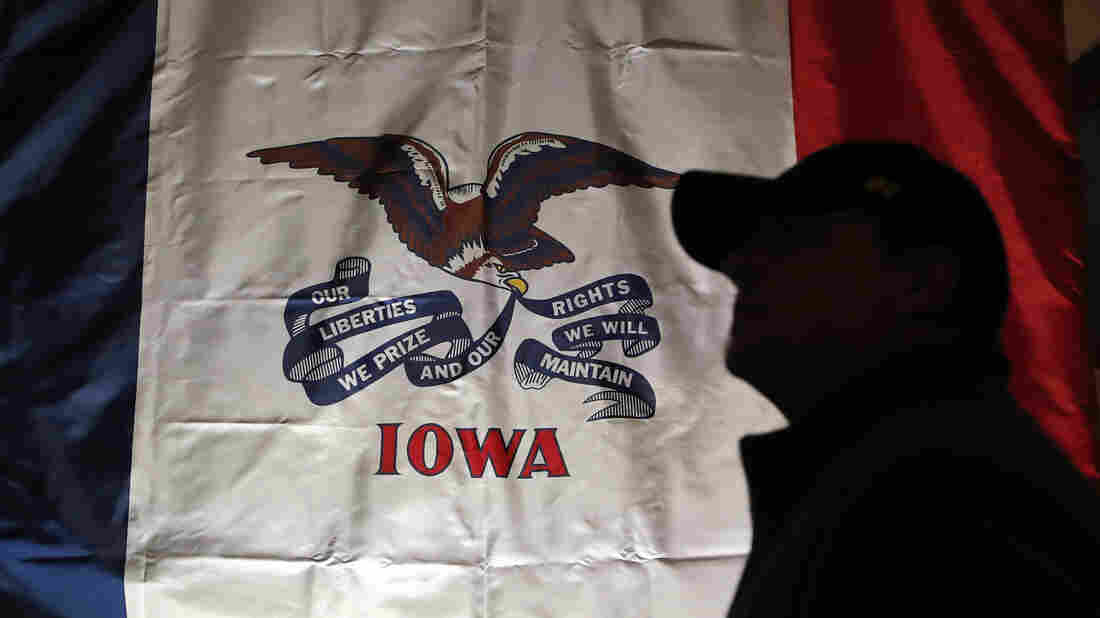 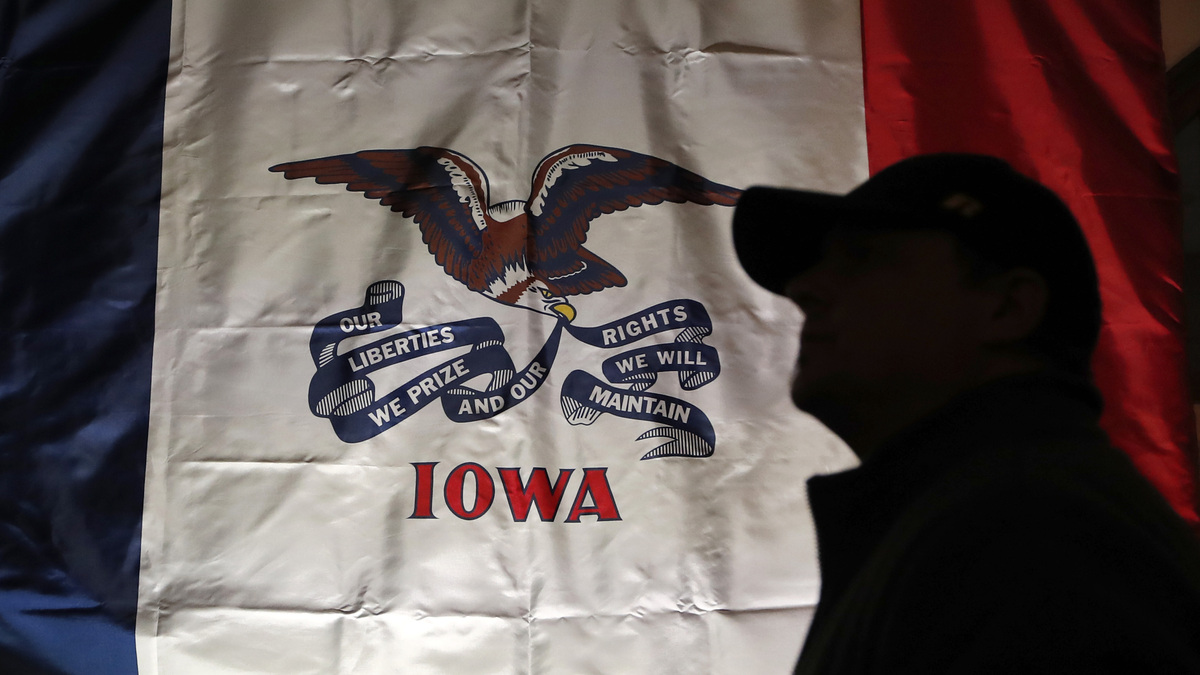 Iowa Democrats gather Monday to kick off the nominating contests that will pick the party's presidential nominee — the person who will take on President Trump in November.

But how they do it is complicated.

The Iowa caucuses are kind of like neighborhood meetings where people get together and — out in the open, with no secret ballot — try to win over their friends, family and neighbors to support their preferred candidate.

The caucuses start a months-long process that eventually leads to the selection of 41 delegates, who will vote for a candidate at the party's national convention. It's a complex, unique and exhausting process that might go a little differently if done in a place that was temperamentally unlike Iowa.

The caucuses quadrennially come under fire for being overwhelmingly white and not representative of the country, let alone the Democratic Party. But the candidates have spent millions there and over the past 40 years, and it has been very predictive of who becomes the Democratic nominee.

Let's break down how all this works.

What time do the caucuses take place?

They begin at 7 p.m. CT (8 p.m. ET) and are expected to last roughly an hour. The Iowa Democratic Party is trying to expedite the process this year with just two rounds of caucusing, so they may very well be wrapped up in less than an hour. 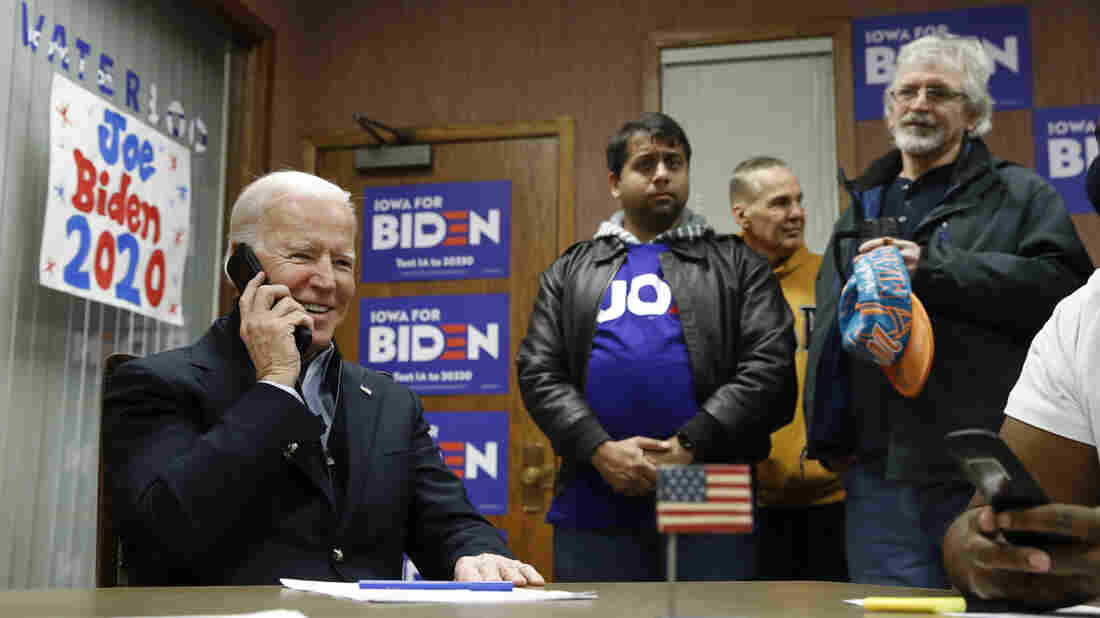 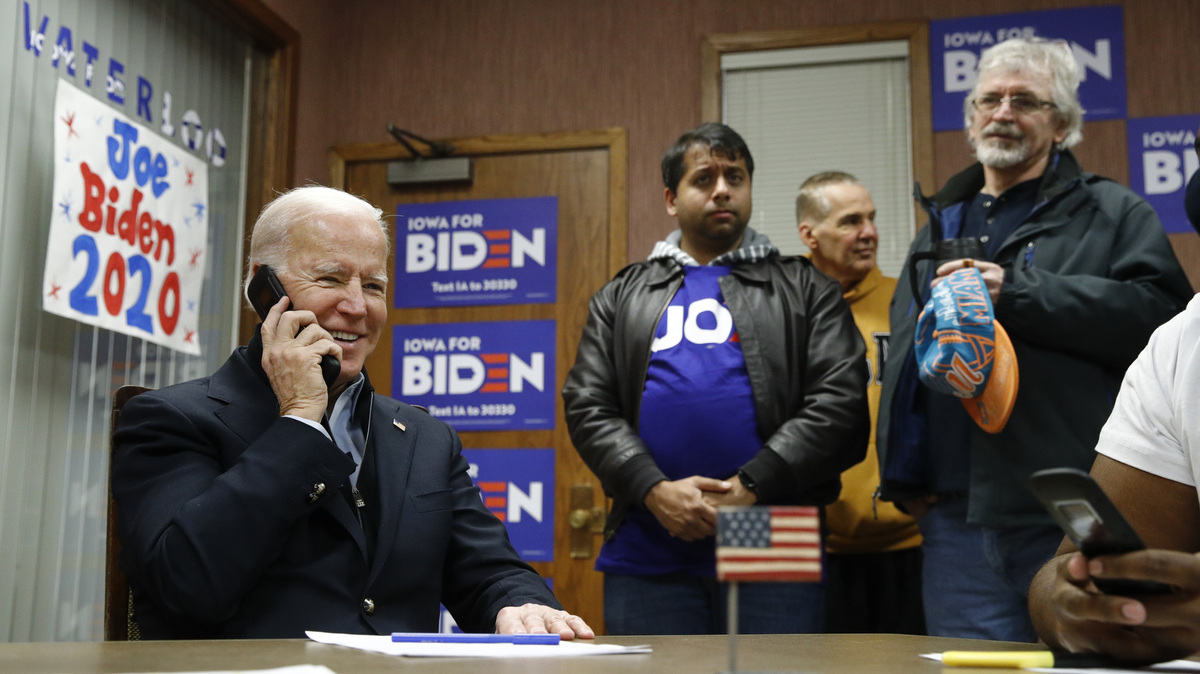 The caucuses are "open." In other words, any registered voter in the state can participate.

But for as much attention as the caucuses get, not many Iowans actually participate. In 2016, for example, fewer than 16% of people eligible to vote actually caucused.

For what it's worth, given the number of candidates this year, the Iowa Democratic Party is anticipating a record-breaking turnout.

Where do the caucuses happen?

They happen all around the state's 99 counties at 1,678 precinct locations, including in people's homes, public libraries and school gymnasiums. 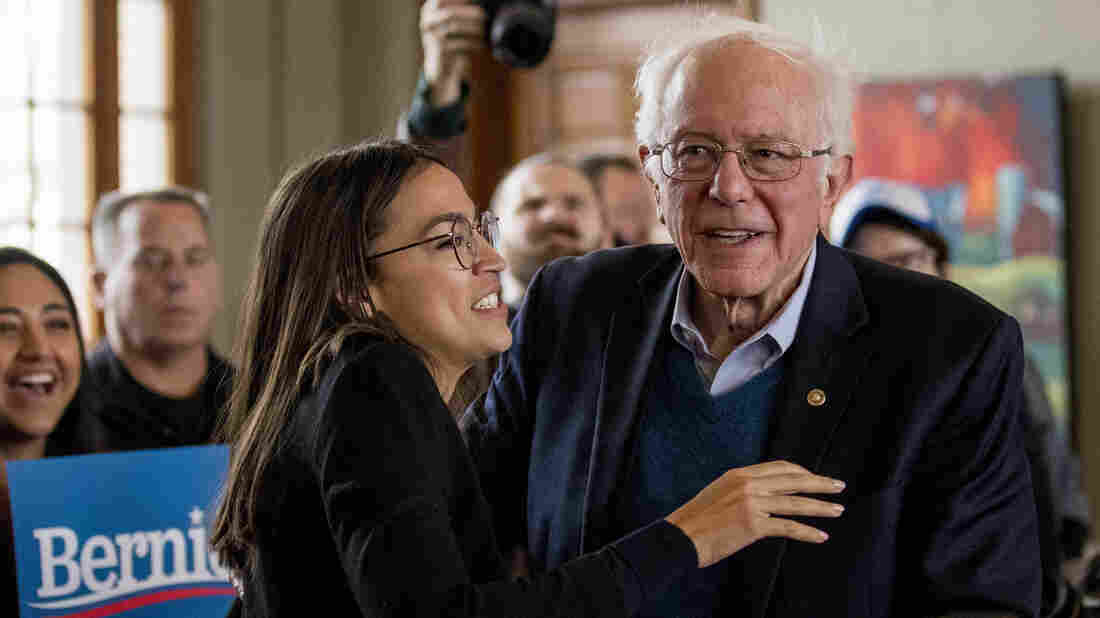 Sen. Bernie Sanders smiles as he is welcomed to the podium by Rep. Alexandria Ocasio-Cortez of New York during a campaign stop in Perry, Iowa. Andrew Harnik/AP hide caption 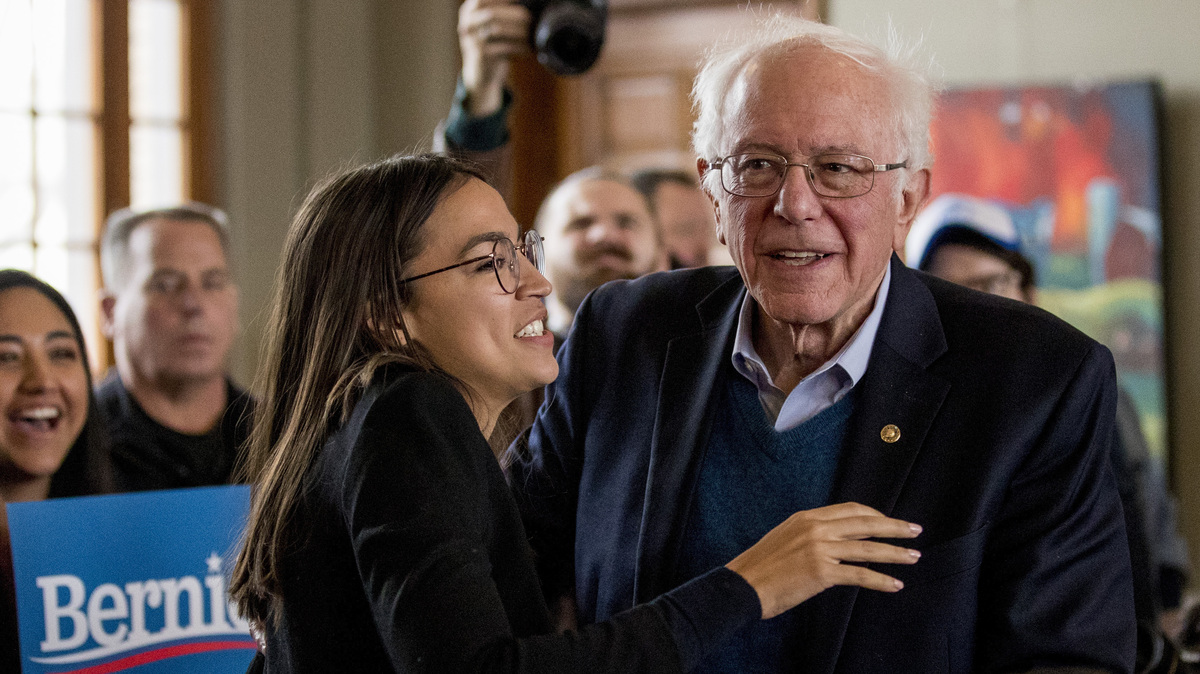 Sen. Bernie Sanders smiles as he is welcomed to the podium by Rep. Alexandria Ocasio-Cortez of New York during a campaign stop in Perry, Iowa.

How will we know who wins?

This year will be extraconfusing, because the state party will release three different results:

SDEs are the estimated number of delegates each candidate would get to the congressional district and state conventions.

Various campaigns will use the potentially differing results to their advantage, but delegates are the name of the game in Iowa. That's why the campaigns have built up operations with hundreds of staffers and volunteers in the state, to show their grassroots support and campaign strength of organization.

So while the first two results will be useful to inform analyses, the "winner" will be who gets the most SDEs. 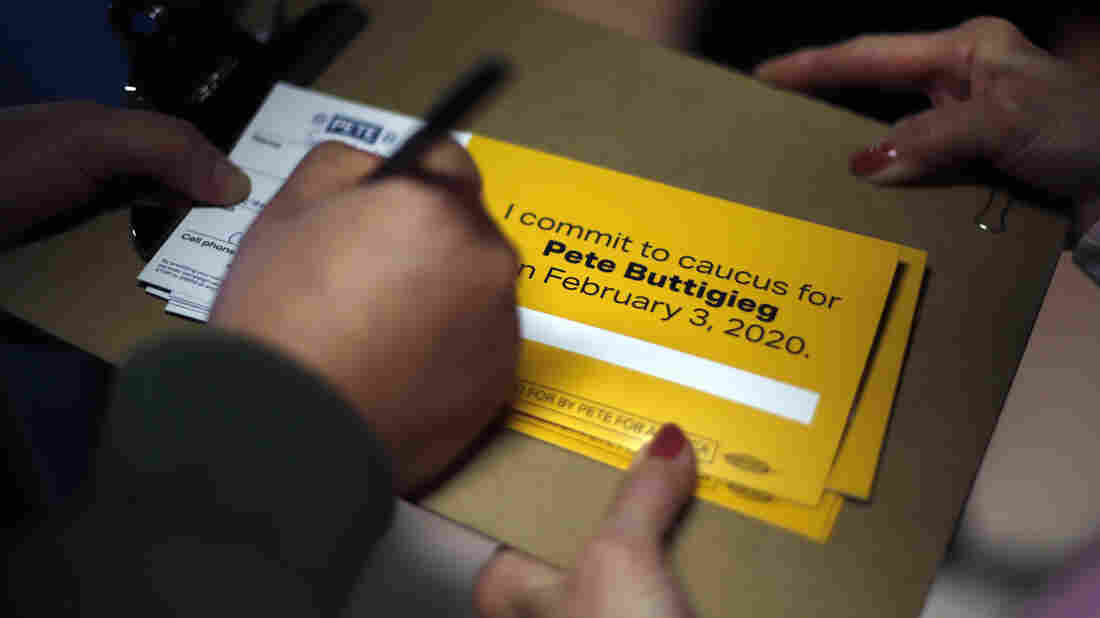 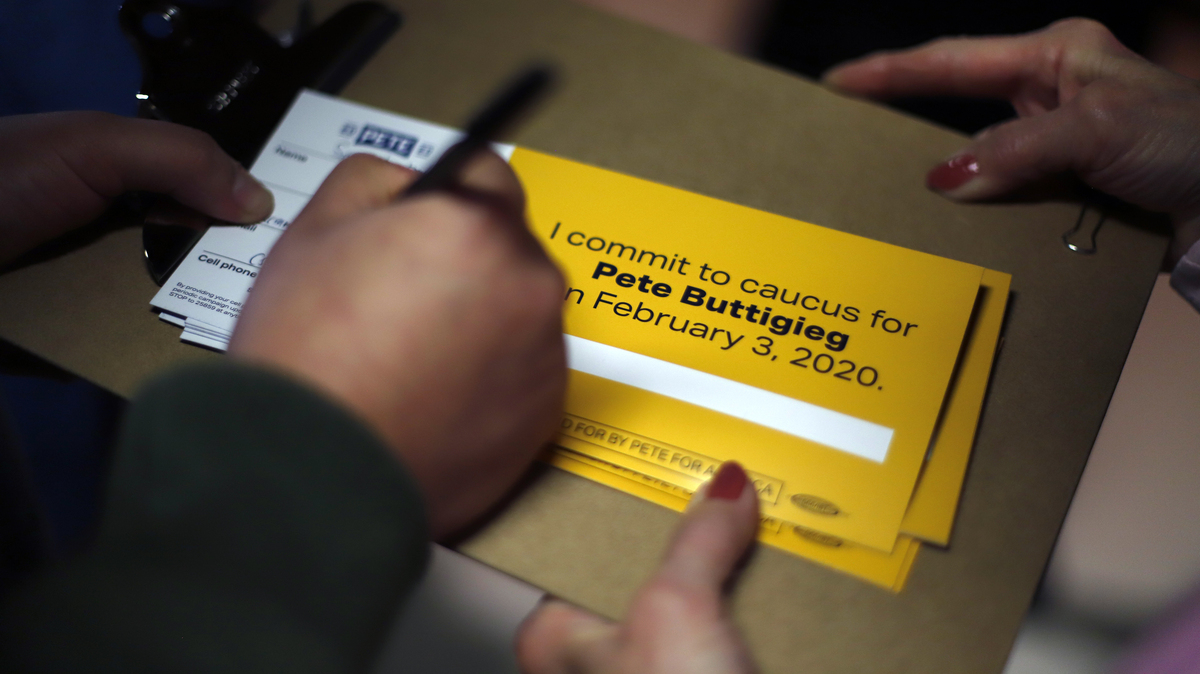 How are the delegates selected?

The caucusgoers from the 1,678 precincts determine 11,402 delegates, who will go to county conventions on March 21.

To hold onto delegates, campaigns have to try to keep activists and staffers at each of these steps because they are not bound to their candidates, and often the results can be very different from the caucus night results.

For example, on the Republican side in 2012, Ron Paul's band of activists gamed the system, stuck around for each step, wound up with the most delegates out of Iowa in the end (despite losing on caucus night), and took over the Iowa GOP.

How do the caucuses themselves work?

There are two rounds of caucusing, and candidates need to get at least 15% of the assembled crowd in order to receive any delegates.

If a candidate does not get 15%, they get no delegates, and their voters can re-sort and go to their second choice in the next — and final — round.

Once the re-sorting is finished, the number of people in each candidate's corner is tallied and submitted using a complicated worksheet to figure out the number of delegates that would be assigned. 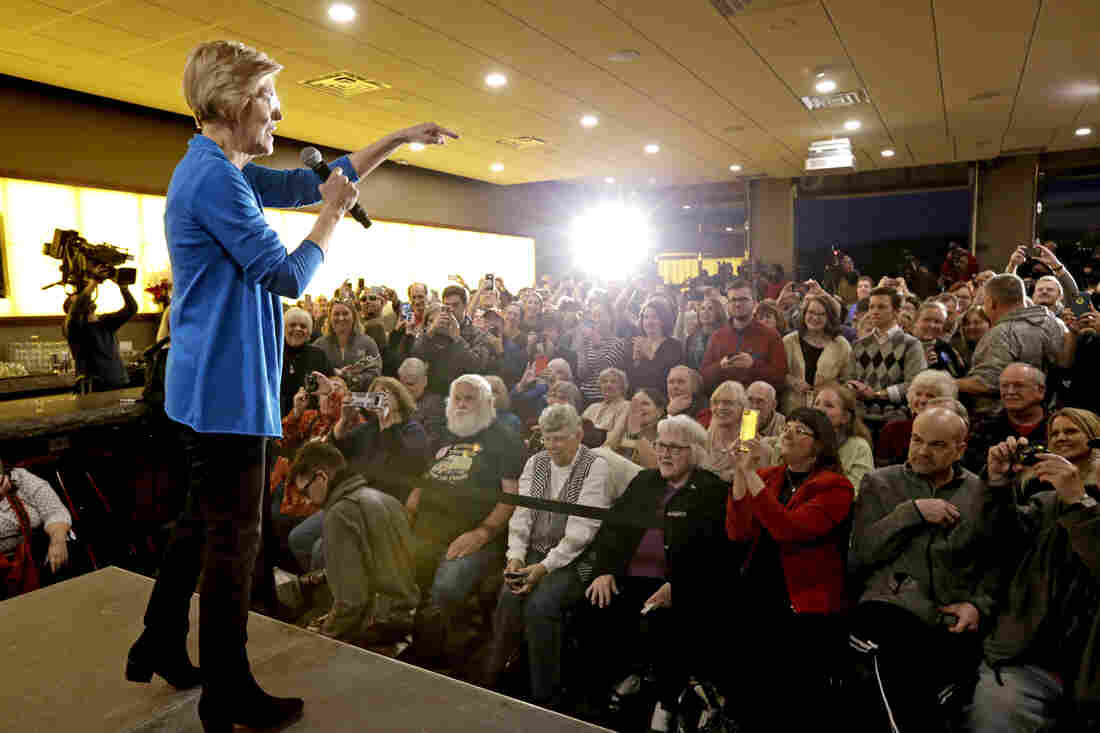 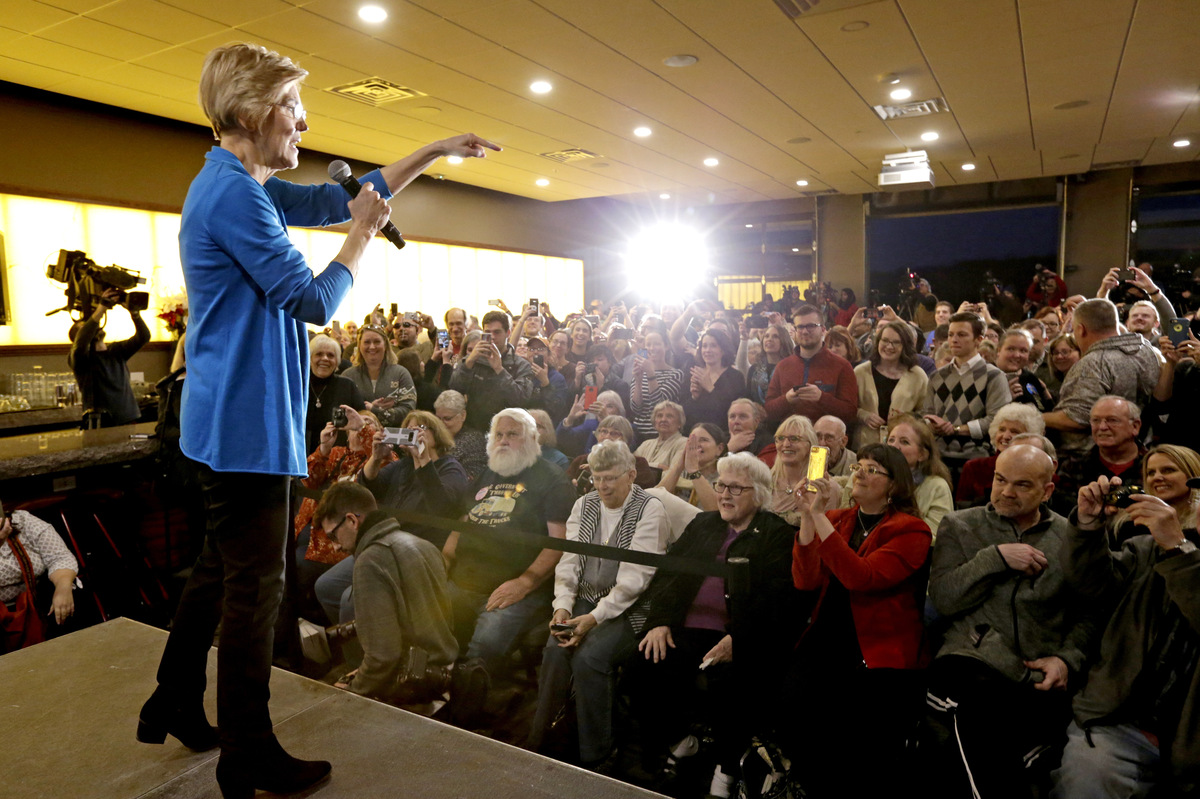 Sen. Elizabeth Warren of Massachusetts speaks to a crowd in Council Bluffs, Iowa.

So if a candidate doesn't get 15% in the first round, he or she is eliminated?

Pretty much. That's why candidates who have been polling far below that threshold have little chance of picking up any delegates.

It's also worth noting that there is a 15% threshold to pick up delegates in every Democratic nominating contest in every state. This is a longstanding Democratic National Committee rule to avoid lots of candidates splitting the vote and creating brokered conventions.

Are there any exceptions?

There is one caveat in Iowa. Someone who doesn't get enough support in the first round has a chance to move into the final round if they can persuade enough supporters of other nonviable candidates to lend them their votes for the second round.

Here's an example: Say 100 people caucus, and in the first alignment, 25 go for Bernie Sanders, 22 for Joe Biden, 17 for Pete Buttigieg, 14 for Elizabeth Warren, 10 for Amy Klobuchar, nine for Andrew Yang and three for Tom Steyer.

Sanders', Biden's and Buttigieg's support is locked in. Their numbers can't decline in the next round. If Warren's team convinces one Klobuchar, Yang or Steyer first-round supporter to go with her, she would be viable and would get some delegates. In theory, if Warren's supporters persuaded, say, all of Klobuchar's, Yang's and Steyer's backers to go with her, Warren would actually win the most delegates from the caucus site. The odds of that are not very good, but the "zombie candidate" is, in theory, possible.

Is there any check on the number of caucusgoers tallied?

Yes. For the first time this year, caucusgoers will write down who they are supporting so there will be paper backups, in case recounts are necessary.

There was no way to do a recount in previous years, and that became a problem in some caucus locations in 2016 when at least a dozen precincts were decided by coin flip between Sanders and Hillary Clinton.

There are eight unpledged delegates in Iowa who bypass this whole process and go straight to the national convention. They are officially called "automatic delegates" now.

They used to be colloquially called "superdelegates." That was never their official name, but the media would call them that and members of the DNC would use it, too, because these current and former party leaders' and elected officials' "super" power used to be that they were able to vote however they wanted at the convention.

They could tip the scales of a campaign for their preferred candidate, although most went with the direction the political wind was blowing and backed the candidate ahead in the delegate race.

Still, as a result of the 2016 election, when so many came out early for Clinton, the party listened to the protests of the Sanders campaign and supporters and stripped superdelegates of their ability to vote on the first ballot at the national convention (unless there is already an overwhelming majority of delegates for one candidate).

Does Iowa have a big number of delegates at stake?

The Perfect State Index: If Iowa, N.H. Are Too White To Go First, Then Who?

Iowa and New Hampshire combined have just 2% of the delegates, and the first four states, including Nevada and South Carolina, have just 5%.

Then why are they so important?

The real impact of these early contests is momentum — who does well, who doesn't and who beats expectations will determine who continues to see a viable path for themselves to the nomination.

And Iowa in particular is important for the Democratic nomination. The last seven of nine people who have won Iowa have gone on to be the nominee, including the last four.

It's all why — despite the caucuses being more than 90% white — as of two weeks ago, the candidates had spent $50 million on ads in Iowa alone.