Accessibility links
'A Time To Build' Argues That When Institutions Are Used As Stages, People Lose Trust We now think of institutions less as formative and more as performative, less as molds of our character and more as platforms for us to stand on and be seen, says National Affairs Editor Yuval Levin. 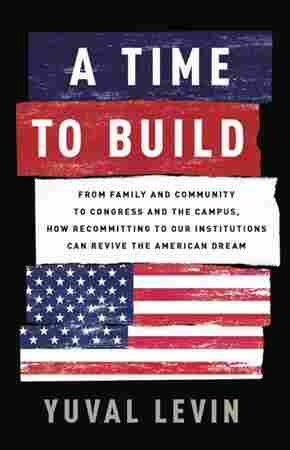 A Time to Build

From Family and Community to Congress and the Campus, How Recommitting to Our Institutions Can Revive the American Dream

Title
A Time to Build
Subtitle
From Family and Community to Congress and the Campus, How Recommitting to Our Institutions Can Revive the American Dream
Author
Yuval Levin

Yuval Levin — director of social, cultural, and constitutional studies at the American Enterprise Institute and the editor of National Affairs — says Americans are losing trust in institutions.

"We trust an institution when we think that it forms the people within it to be trustworthy — so that not only does it perform an important social function, educating children or making laws or any of the many, many goods and services that institutions provide for us, but it also at the same time provides an ethic that shapes the people within it to perform that service in a reliable, responsible way," Levin told NPR Wednesday.

He says that people should ask themselves: Given my role here, in this institution – which could be anything from the government to the military to family, marriage and professions — how should I behave?

His new book, A Time to Build: From Family and Community to Congress and the Campus, How Recommitting to Our Institutions Can Revive the American Dream, surfaces the problem, he says, to help find a path forward.

On the military as an exception

I think the military is the great exception to our loss of trust in institutions, because I think that it is still clear to us that the military is formative, that it shapes the people within it and takes one kind of human being and produces another. We've lost the sense that many of our other institutions do that, because I think in some respects we don't expect them to do that in the way we used to.

On using institutions as a platform

We now think of institutions less as formative and more as performative, less as molds of our character and behavior, and more as platforms for us to stand on and be seen. And so for one arena to another in American life, we see people using institutions as stages, as a way to raise their profile or build their brand. And those kinds of institutions become much harder to trust. ...

Politics is an easy example. So, think about Congress. Congress can be a very formative institution. It produces a kind of human person, a man or woman who is a member of Congress. But now Congress is very much a performative institution. Members think of it as a way to raise their profile, to get a better timeslot on cable news or talk radio or a bigger Twitter following. And they use Congress as a platform from which to comment on the culture, to comment on politics, to comment on Congress, rather than using the institution as a way to shape themselves to become more effective in our politics. ...You know, a lot of younger members of Congress are like this. So if you think about members who are, say, young, younger than 50 now, pretty much all of them in one way or another, think about the institution as a way to raise their profile. [Sen.] Ted Cruz, after every session of the impeachment trial that's going on now, hosts a podcast and goes out and comments on what he's just been engaged in doing. [Rep.] Alexandria Ocasio-Cortez, on the Democratic side, uses Congress as a way to become a figure in our culture. Now, this is crazy and it isn't useless, right? It's important for important public figures to also have a profile in the culture. But when it comes to replace their inside function, their function within the institution, it makes it much harder for the institution to function and much harder for us to trust it.

I think there are ways that institutions are unavoidably formative, but ultimately when members come to think of Congress as a platform for themselves, it becomes much harder for them to see how working within the institution cooperating and bargaining is really what Congress is for. And it's intended to create a venue for a kind of accommodation that, ultimately, the politics of a free society hasn't had to advance. That's just much harder to see when what happens in most congressional hearings now is basically a bunch of individuals producing YouTube clips to use later in campaigns.

On institutions having constraints

I think if you think about the transformation of our institutions through the kind of lens that I try to offer here, we should not have let ourselves be calmed by those kinds of assurances. President Trump is the first of our presidents who has not been formed by any of the institutions of public service in our country. Every past president has either been a senior officer in the military or in most cases served in other elected office ... in a way that gave them a kind of understanding of the shape of the institution and of how it might mold them to be effective.

We can't stand and say, well, what do you expect? That's how people in power behave. Instead, we should say we expect a lot better than this. People in power owe us more than this....

I think that's one of the effects that Trumpism has had on our politics, is a lowering of expectations that makes it very hard for us to come back from the kinds of problems we've encountered in our politics. We have to be able to say people with power have certain obligations — and not just as outsiders watching people in power. All of us have some roles to play within some institutions, even if that's our family or community or workplace, let alone national institutions and politics and the economy. We each have to say, given my role here, what's my responsibility? I would bet you that the people who most drive you crazy in American life are people who are failing to ask that question when they obviously should. ...

On trust in journalism

The power of journalism is that it offers us a process of verification and confirmation and affirmation that lets us believe what we're told. So the loss of trust in journalism, I think, has in part to do with a general collapse of trust and expertise. But it also has to do with the way that some professional journalists have allowed themselves to be pulled out of the institutions that empower them with that kind of trust and to stand on a platform on their own, building their own brands — on social media and on cable news — offering opinion in ways that are very hard to tell apart from the professional work they do, and making it hard for people to know if they should be trusted.