Accessibility links
No Witnesses In Impeachment Trial, Senators Vote Democrats had hoped to introduce witnesses but failed to get enough Republican support. The trial now moves to a final phase, which includes a vote on whether to acquit or convict the president. 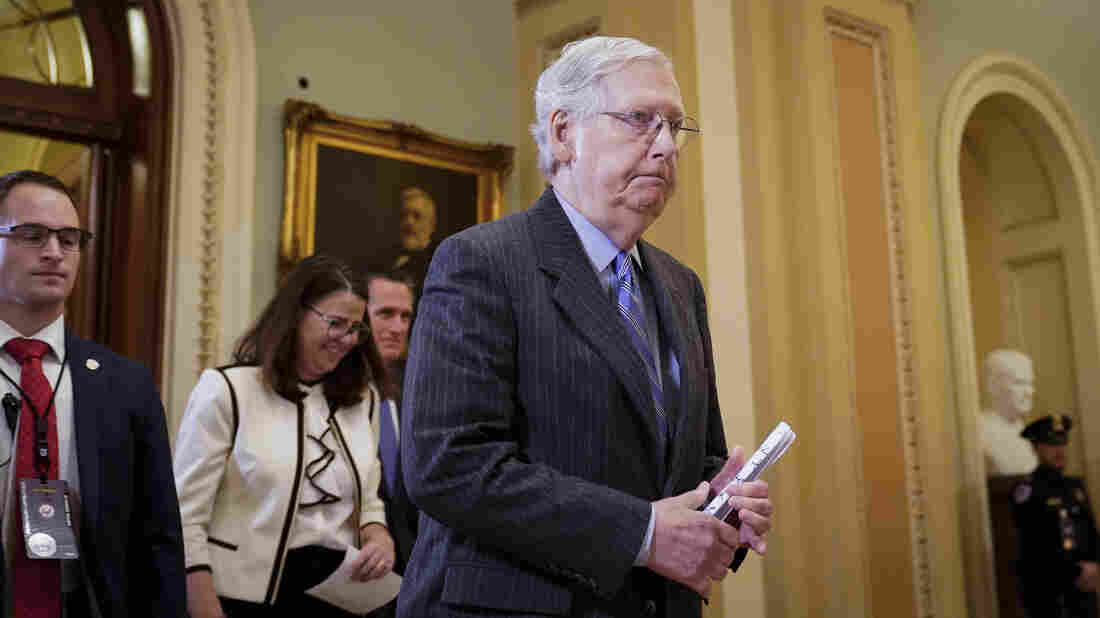 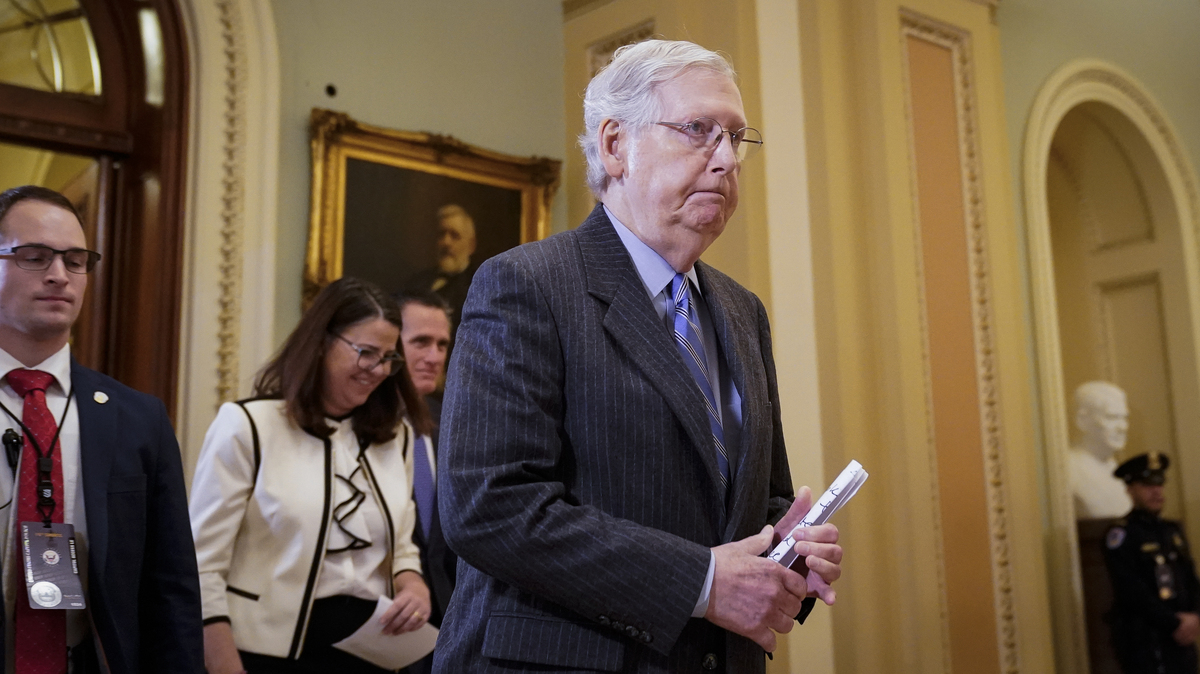 Senate Majority Leader Mitch McConnell, R-Ky., leaves the Senate chamber during a recess in the impeachment trial of President Trump on Friday. Senators voted against admitting witnesses and new evidence on Friday.

The Senate impeachment trial adjourned Friday evening, with a plan to return Monday morning to continue. Closing arguments will be presented Monday, after which senators will be permitted to speak on the floor. A final vote, during which President Trump is expected to be acquitted, is expected next Wednesday around 4 p.m. ET.

On Friday. the Senate voted not to call witnesses in the trial. The vote was 51 to 49 against witnesses. Democrats had pleaded for two weeks to hear testimony from, among others, former national security adviser John Bolton. But most Republicans resisted. Just two Republicans — Sens. Mitt Romney of Utah and Susan Collins of Maine — voted with the Democratic caucus.

The president faces two articles of impeachment: abuse of power and obstruction of Congress related to accusations that he held up military aid to Ukraine until the country announced investigations into potential political rival former Vice President Joe Biden and his son Hunter.

Friday night's vote result was not a surprise following announcements from key Republican senators that they would not be supporting witnesses. Sens. Lisa Murkowski of Alaska and Lamar Alexander of Tennessee said they do not need to hear testimony, which would have prolonged the trial.

Senate Majority Leader Mitch McConnell, R-Ky., said in a statement Friday evening that there was no need for witnesses.

"Never in Senate history has this body paused an impeachment trial to pursue additional witnesses with unresolved questions of executive privilege that would require protracted litigation," he said. "We have no interest in establishing such a new precedent, particularly for individuals whom the House expressly chose not to pursue." 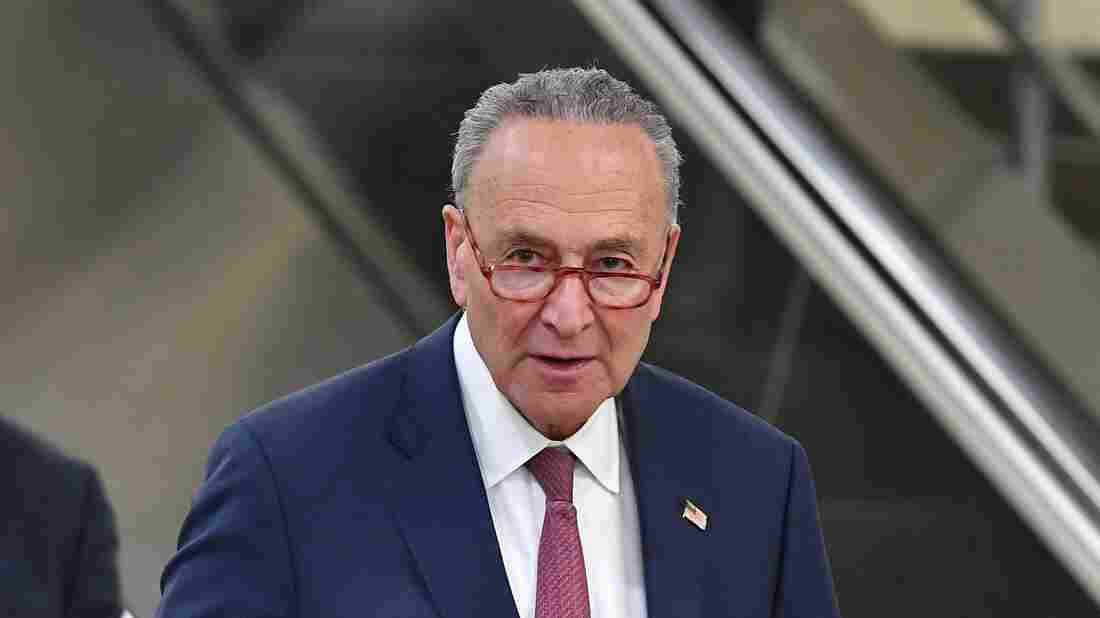 Minority Leader Sen. Chuck Schumer makes his way to speak to reporters during a break in the Senate impeachment proceedings on Friday. Mandel Ngan/AFP via Getty Images hide caption 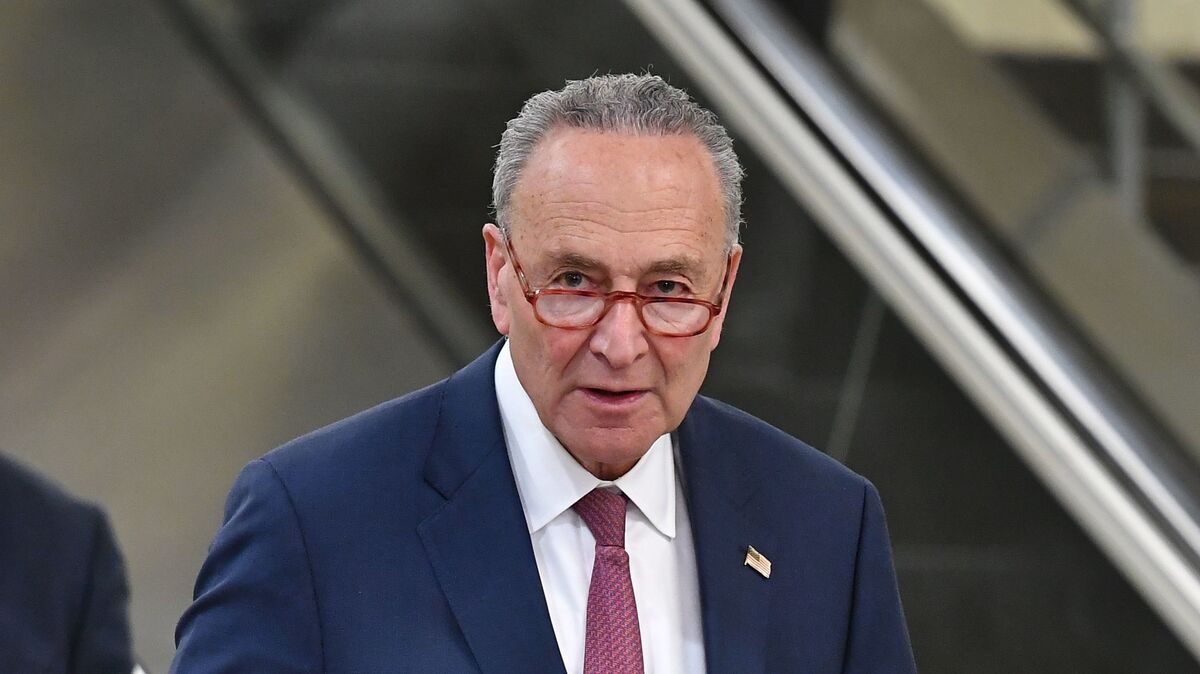 Minority Leader Sen. Chuck Schumer makes his way to speak to reporters during a break in the Senate impeachment proceedings on Friday.

Senate Minority Leader Chuck Schumer, D-N.Y., pushed back immediately after the vote. He called the decision "a perfidy. It's a grand tragedy." He said that if Trump is finally acquitted now, "the acquittal will have no value."

Democratic House managers' hopes of calling witnesses who could have proved damaging to Trump were dashed even before a vote on the motion.

Alexander announced his decision not to join the Democrats' effort on Thursday; Murkowski's statement came Friday before the Senate trial resumed.

The looming acquittal for the president was long anticipated, but the roadblock on witnesses still marks a striking setback for Democrats, who at times appeared hopeful that they would be able to persuade enough Republicans to join them in voting to call witnesses, thereby prolonging the trial if not the altering its outcome.

Murkowski made clear on Friday that she did not want an extended trial.

"Given the partisan nature of this impeachment from the very beginning and throughout, I have come to the conclusion that there will be no fair trial in the Senate," Murkowski said in a statement. "I don't believe the continuation of this process will change anything. It is sad for me to admit that, as an institution, the Congress has failed."

Alexander gave a different rationale: He argued that he had enough evidence that Trump acted inappropriately — but he does not think the president's actions are impeachable. "If you've got eight witnesses saying that you left the scene of an accident, you don't need nine," he told NPR on Friday.

The Democratic caucus needed four Republicans to defy their party in order to succeed, but it ultimately only got two.

Collins on Thursday announced that she planned to vote for hearing witnesses.

"I believe hearing from certain witnesses would give each side the opportunity to more fully and fairly make their case, resolve any ambiguities, and provide additional clarity," she said in a statement.

A spokeswoman for Romney said on Twitter Friday morning that the senator wanted to hear from Bolton.

Bolton became a central figure in the fight over witnesses after reports describing portions of his forthcoming book in which he purportedly verifies accusations that Trump directly tied military aid to Ukraine with a demand for investigations into his political rivals.

When the Senate trial resumed Friday, Schiff immediately read into the record a New York Times story that reported on a new revelation in Bolton's manuscript.

According to the Times, Bolton says Trump told him in early May to call Ukraine's president to set up a meeting with Trump lawyer Rudy Giuliani to discuss an investigation into the Bidens. Bolton says that among those in the Oval Office meeting with Trump and Bolton was White House counsel Pat Cipollone. Cipollone is now leading Trump's defense team.

"You will recall Mr. Cipollone suggesting that the House managers were concealing facts from this body. He said all the facts should come out," Schiff told senators. "Well, there is a new fact which indicates that Mr. Cipollone was among those who are in the loop. Yet another reason why we ought to hear from witnesses."

Trump denied the account in a statement provided by the White House.

"I never instructed John Bolton to set up a meeting for Rudy Giuliani, one of the greatest corruption fighters in America and by far the greatest mayor in the history of NYC, to meet with President Zelenskiy. That meeting never happened," he said.

NPR has not reviewed the manuscript.