Accessibility links
Primal Scream's 'XTRMNTR' Saw Our Future 20 Years Ago The Scottish band's 2000 album XTRMNTR isn't as well remembered as its thematic twin, Radiohead's Kid A. But its dark premonition of a world in socioeconomic crisis looks startlingly accurate today. 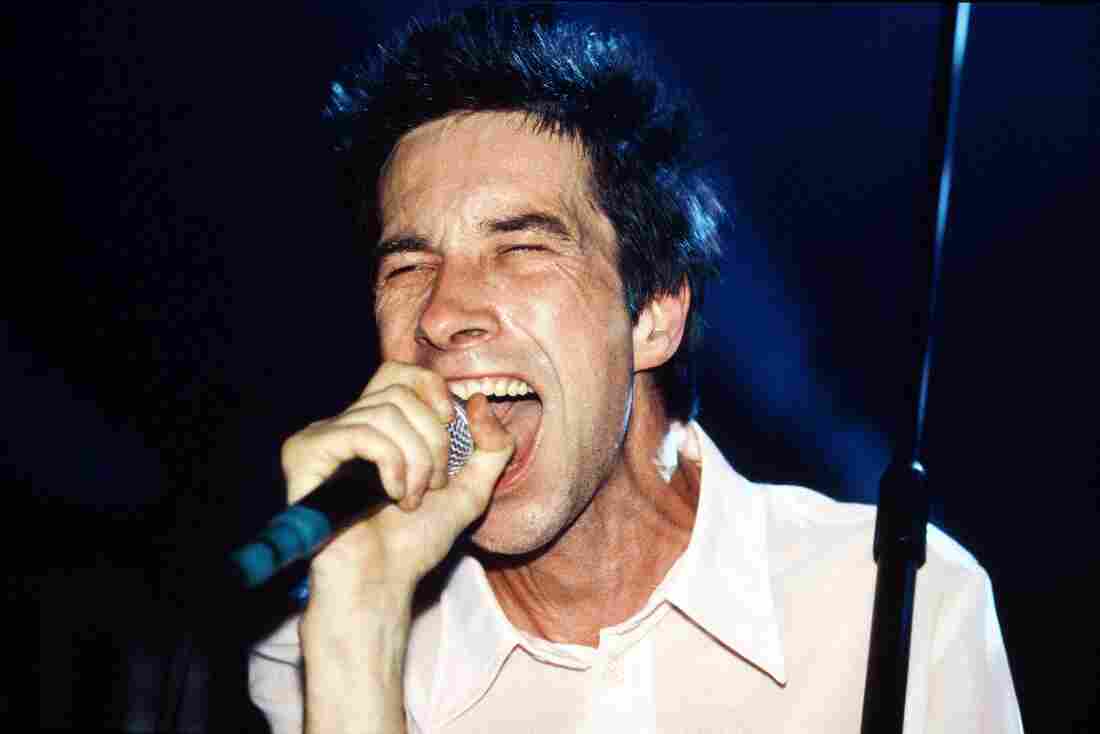 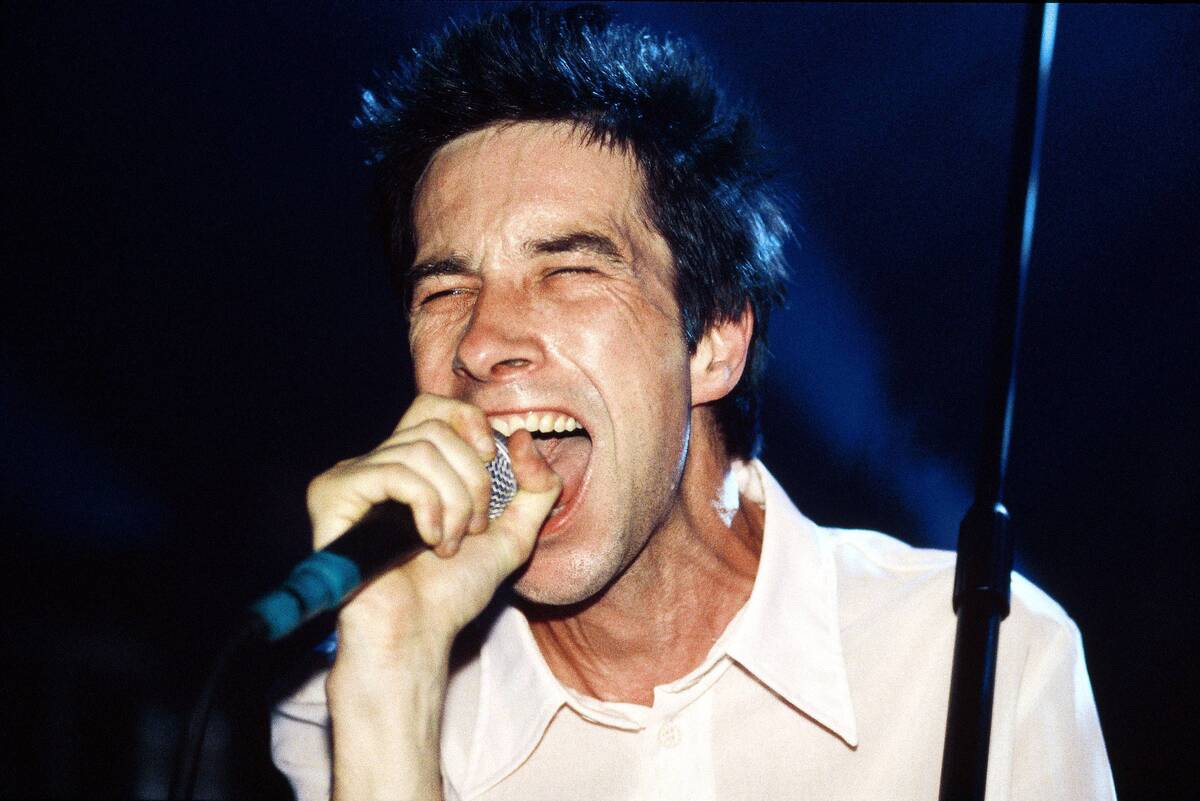 At the start of the 21st century, popular culture held up a persistent warning: Capitalism is peaking, and doom is just around the corner. You can see it in turn-of-the-millennium artifacts like Fight Club, The Matrix, Rage Against the Machine's The Battle of Los Angeles, Nine Inch Nails' The Fragile, Grant Morrison's comic series The Invisibles. You can hear it in the era's radical thought, even if the glib anti-consumerism of No Logo and Adbusters feels less potent today than it did back when name-dropping Noam Chomsky for intellectual cool points was at its height. It was the cloud around the WTO protests that shut down Seattle near the end of 1999.

And yet, that future still read most often as dystopian science fiction. Bolstered by the relative peace and prosperity of the late-Clinton, pre-9/11 era, the dominant mood in American culture was still one of optimism: a pervasive assumption that this moment of stability was going to be permanent. Which led one British rock band — perhaps not the one you think — to call the danger out by name.

When Primal Scream, the genre-jumping Scottish group, released its sixth album XTRMNTR in early 2000, its apocalyptic imagery was easy to write off as overblown. Surveillance states. Militarized police. Opioid epidemics. Propaganda spreading like wildfire. Endless war. The extermination of the underclass. But here we are 20 years later, and those alarmist talking points from the paranoid fringe have begun to look look startlingly prophetic. Plenty of art from this period can be seen as prescient today, but Primal Scream assessed what was starting in the late '90s without restraint, and predicted the outcome with exceptional, unsettling accuracy.

Since forming in Glasgow in the early 1980s, Primal Scream has always lacked a fixed identity. The band's only constant member is singer Bobby Gillespie, though multi-instrumentalists Andrew Innes and Martin Duffy have been mainstays since the late '80s, and their discography reflects the scattered interests of excitable dilettantes with a malleable style and an impressive record collection. Sometimes those tastes have aligned with the prevailing trends of the moment: twee indie-pop at the start of their career, or the "Madchester" dance scene of the early '90s on their 1991 breakthrough, Screamadelica. Other times they have followed their own peculiar muses: periodic excursions into Rolling Stones-esque '70s rock, or flirtations with dub and modal grooves in the late '90s.

XTRMNTR (pronounced "Exterminator"), released Jan. 31, 2000 in the U.K. and licensed in the U.S. soon after, broke the band's streak of staking new genre territory on each release, instead expanding on the palette of 1997's Vanishing Point. Its sonics and lyrics, however, pushed Primal Scream to new extremes of aggression and political messaging. The album ranges from deranged garage rock and hypnotic shoegaze to spacey jazz and full-on techno, all unified by abrasive tones and heavy beats. Songs like the charging instrumental "Blood Money" and the tweaked-out rocker "Accelerator" twitch with fight-or-flight urgency. Others sound like war, unmistakably violent in their rhythms and harsh blasts of treble and rumbling bass. The songs are mostly rock in form and tone, but the arrangements are dominated by programmed beats, synthesizers, and samples, making it all sound like it's being broadcast live from some bombed-out futuristic city.

At the center of it all, Gillespie sings with paranoid, unhinged energy, like an addled burnout trying to tell you what's really going on. The band, who had been so attuned to cultural trends in the arts, was now looking toward the greater social zeitgeist and freaking out.

"Insecticide shots for criminal cops," Gillespie mutters conspiratorially on the title track. "All jails are concentration camps; all judges are bought." One song later, he sounds fully panicked about a "military industrial illusion of democracy." But even the most hyperbolic images of the techno-rock number "Swastika Eyes," a song the band felt so strongly about that it appears on the album twice (as two distinct mixes, neither presented as the "primary" version), could just as easily be about the revived Neo-Nazi and white supremacist movements making news today — particularly the description of an "elimination policy" as guiding psychology.

The most resonant recurring theme on XTRMNTR is its notion of the corrosive effects of media and propaganda. On "Exterminator," Gillespie describes those forces moving through culture like a psychic disease:

In his moment, "TV junk" could be sitcoms, cable news, early-phase reality television. From today's perspective, those words neatly fit the elective reality distortion that can be brought on by immersion in social media. The lyrics draw few distinctions between media saturation and literal drug addiction — either way it all leads to"damaged receptors, fractured speech," numb distraction and complacency.

Gillespie had serious drug issues of his own at time, and sings about addiction here in thoroughly unromanticized and horrifying terms. "Pills," the centerpiece of the record, is a bugged-out quasi-hip-hop track that gradually degenerates into a self-flagellating shame spiral: "You're a sick, f***, f***, sick, f**, f*** sick, f***." Even the more placid and abstract "Shoot Speed/Kill Light" makes the euphoric aspects of drugs sound like a bullet train zooming straight into a wall. The singer was well acquainted with escapism that goes nowhere and only brings you down, and could see it all around him.

In retrospect, XTRMNTR is something of a musical and thematic twin to Radiohead's Kid A, released eight months later in early October. The albums share a heavy vibe of pre-apocalyptic tension and a remarkably similar palette: Both even have a song built around the contrast of a driving, heavily distorted bass riff and atonal saxophones. But as much as the ideas and influences are alike, it's striking to hear how these two collections of musicians and personalities process them differently.

Where Kid A leans towards abstraction, melancholy and oblivion, XTRMNTR is considerably more cynical about human nature, and more direct in expressing anger and fear. If Radiohead's outlook in this era can be boiled down to "Oh no, the computers!" — which implies a faith in humanity in an unmediated state — Gillespie and Primal Scream aren't bothered by technology as much as obsessed with humanity's worst impulses towards violence, control and self-destruction. It's more, "Oh no, the people!"

But as much as these songs take aim at toxic groupthink, they are also very much the product of community and collaboration. This album was the last to be released on the hugely influential British indie label Creation Records, which had launched the careers of My Bloody Valentine, The Jesus and Mary Chain, Oasis and Slowdive, and it served as a sort of going-out-of-business blowout party with a VIP guest list. XTRMNTR features production and other contributions from Dr. Octagon's Dan the Automator, New Order frontman Bernard Sumner, big beat duo The Chemical Brothers, DFA co-founder Tim Goldsworthy, dub producer Adrian Sherwood, My Bloody Valentine mastermind Kevin Shields and Stone Roses bassist Gary "Mani" Mounfield — with the latter two becoming full-time members by the time the group took the album on tour.

Shields, who at the time had not released anything since My Bloody Valentine's landmark album Loveless in 1991, is crucial in defining the sonic character of XTRMNTR. In the cases of "Accelerator" and "Shoot Speed / Kill Light," his mixes pushed the songs towards a level of in-the-red abstraction that felt like a continuation of the aesthetic his own band had piloted years earlier. With "MBV Arkestra," a radical reworking of the Vanishing Point cut "If They Move, Kill 'Em," he took the group into uncharted territories at the nexus of cosmic jazz and electronic rock.

On these tracks and other team-ups, like the two versions of "Swastika Eyes" respectively helmed by The Chemical Brothers and producer Jagz Kooner, the band itself takes a backseat, happy to be good hosts facilitating a scene. Though it would settle into a more insular and traditional mode of working after this record, it has kept up the XTRMNTR-era practice of inviting guest stars into its world: Collaborations with The Kills' Alison Mosshart, Josh Homme from Queens of the Stone Age, supermodel Kate Moss and most recently, alt-pop singer Sky Ferreira have resulted in some of the best Primal Scream songs this century.

As a cultural document, XTRMNTR exists in a strange limbo today. It's widely considered Primal Scream's definitive work apart from Screamedelica, but the band remains far less famous in the United States than it is in the United Kingdom and Europe. It's part of the critical canon and has placed in "best albums of the 2000s" lists produced by Pitchfork, The Guardian and NME, but it's rarely seen on a new artist's shortlist of stated influences. It has moved on and off streaming services in the U.S. for licensing reasons that are difficult to parse, and this intermittent accessibility is a roadblock to an ongoing legacy.

That's a shame, as XTRMNTR feels more vital and cathartic today than when it was first released. The record isn't just the dark predictions of a modern Cassandra — it's angry, agitated music, with real utility as a way of processing dread, depression, and a gnawing sense of impotence. Unlike a lot of music made during the dark times Gillespie imagined, this record isn't a soundtrack to numbness or despair, but a call to action. He wants you to fight back. On the title track, he's literally begging for civil disobedience.

"Keep Your Dreams," the only truly hopeful song on XTRMNTR, positions friendship and community as the only way to survive and live a meaningful life in a cruel and poisonous world. Gillespie sings the song like a gentle lullaby amidst frigid synthesizer tones, rumbling bass, and a bright, twinkling keyboard melody, which sounds like a precious scrap of innocence that's somehow survived in a moral wasteland. He warns the listener about the dangers of holding on to hate and the costs of selling one's soul, but ultimately just resigns himself to "going down to the underground, as deep as I can go."

Unlike other songs on the record that seek a more private form of oblivion, "Keep Your Dreams" is about the value of holding on to people who matter and keeping them safe. It's about finding refuge, and refusing to be part of a brutal and doomed society. It's still good advice.

Matthew Perpetua is a freelance writer and the founder of Fluxblog.