Accessibility links
Self-Defense Classes Address Crisis Of Missing And Murdered Indigenous Women In some communities, Native American women are kidnapped and killed at a rate 10 times higher than the national average.
Now, some are teaching each other to fight back. 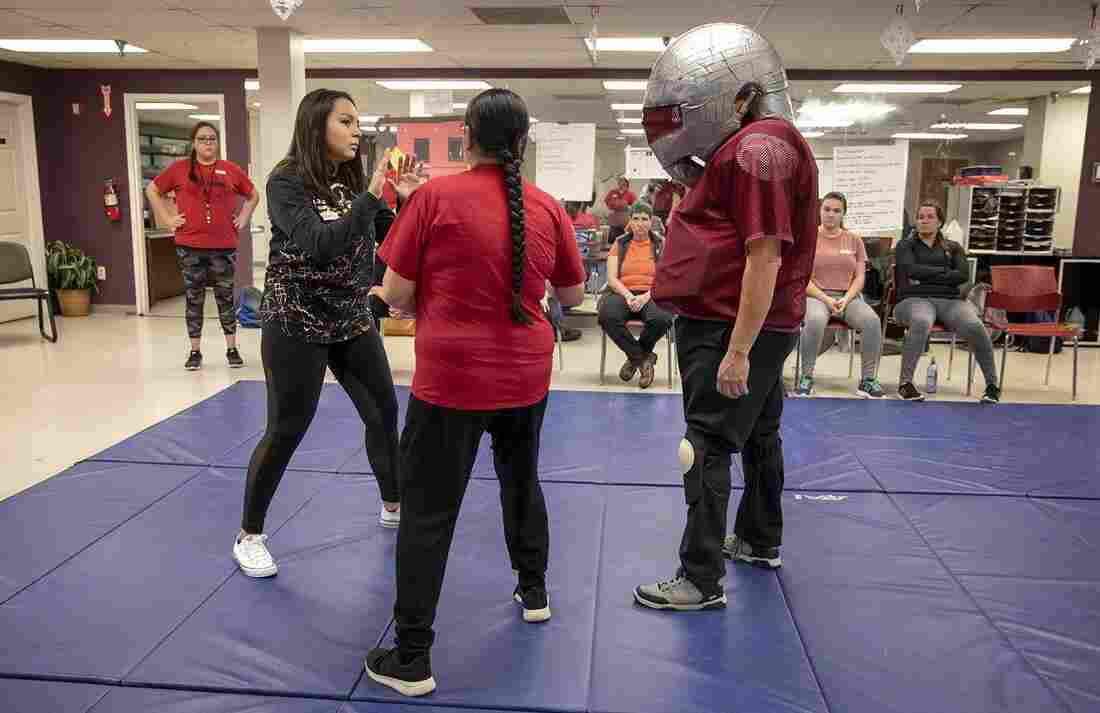 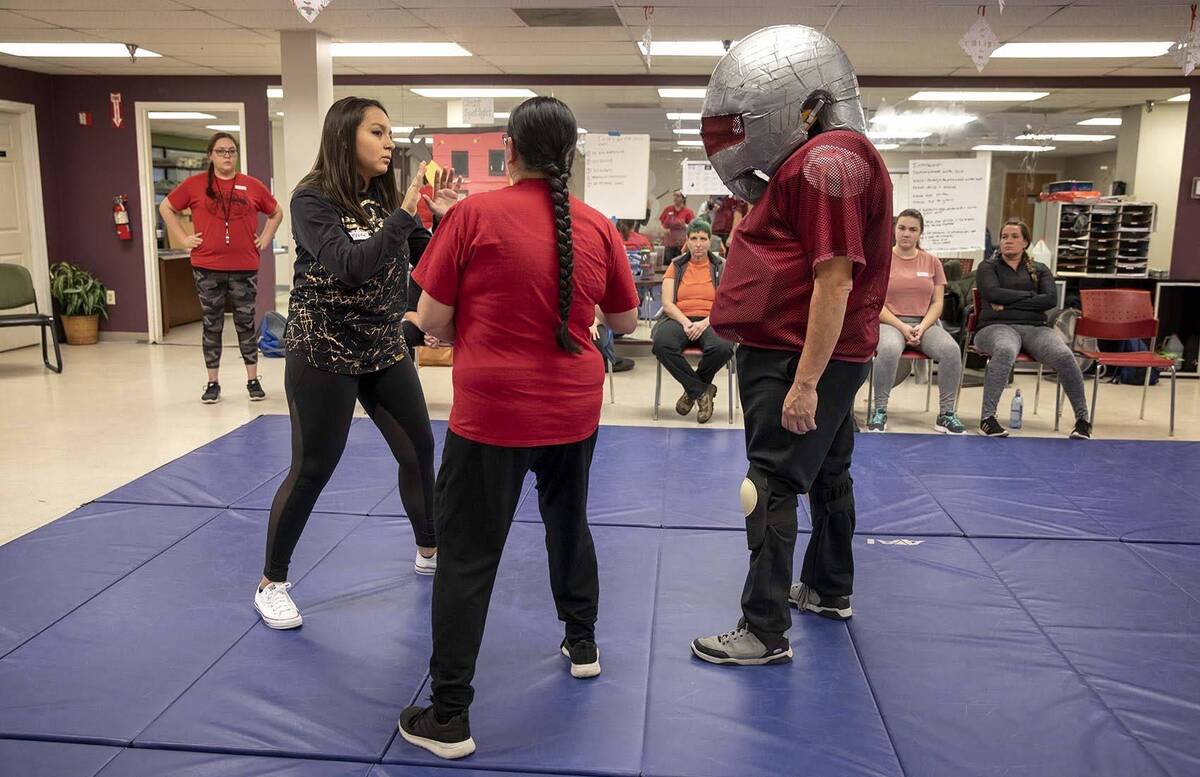 Self-defense student Megan Fleury holds her hands up and faces a potential assailant.

On a recent Saturday in Everett, Mass., Native American women have gathered to learn some self-defense techniques. Before the class starts, sage is burned and instructor Shanda Poitra smudges and asks any Native energies to be with her.

"I just prayed, in my mind, thanking [the] Creator for opportunities and being with me today and helping really get the point across today," Poitra says.

Native women have a basic right to protect themselves.

The women at this particular class come from tribes in Massachusetts, North Dakota and El Salvador. They learn how to recognize threats, how to de-escalate confrontational situations and how to strike an attacker in the groin.

The class culminates with Poitra teaching attendees how to defend themselves against someone who tries to sexually assault them while they're sleeping. She lies on her stomach on the floor and a man gets on top of her.

While still on her stomach, Poitra lifts her right left toward her chest and leverages all of that accumulated weight. Then she heaves up.

"Knocking him off of me," she says. "It only works when all his weight is on me."

In November, President Trump signed an executive order called "Operation Lady Justice," which would create an interagency task force to look into why so many Native women's lives are disrupted or ended because of trauma.

According to research funded by the Department of Justice, in some instances, Native women are killed at a rate 10 times higher than the national average.

But Poitra said she's not waiting on the government to save her people.

"Historically, the government hasn't been very good to Native people," she says. "So I think it's that we start empowering ourselves and start turning it around ourselves." 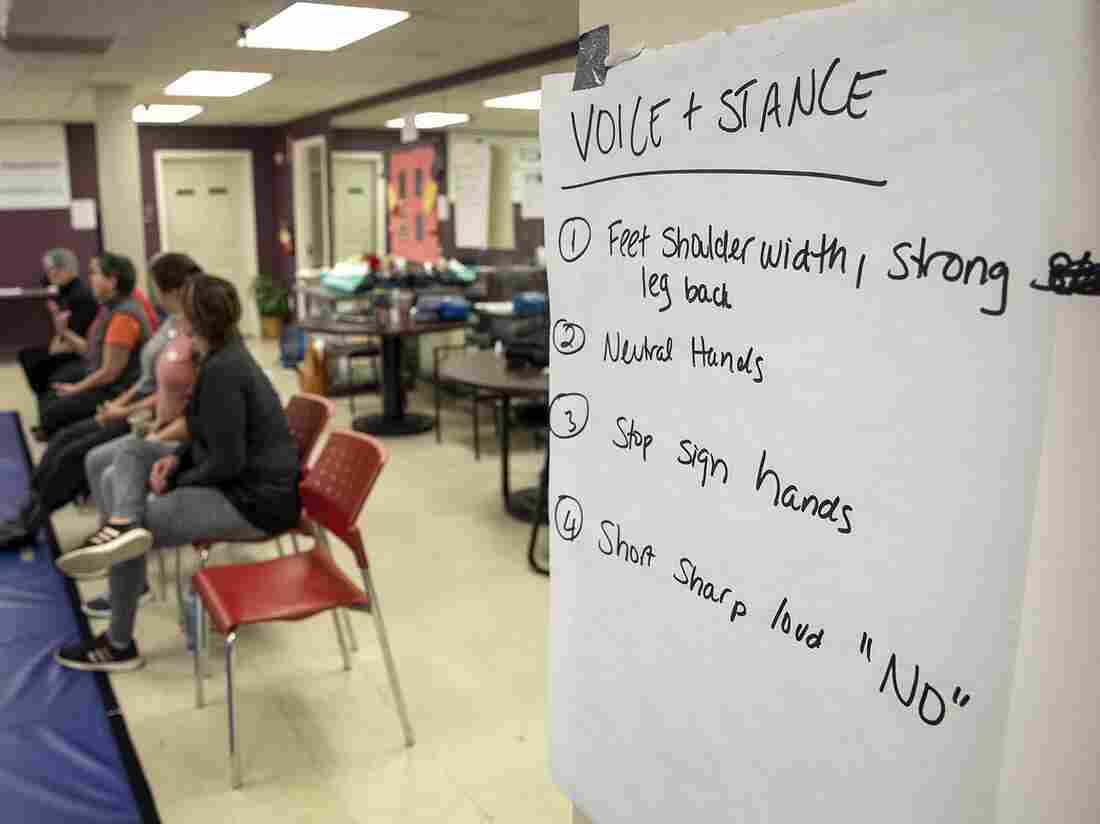 Self-defense notes hang on the walls around the mat at the IMPACT session. Robin Lubbock/WBUR hide caption 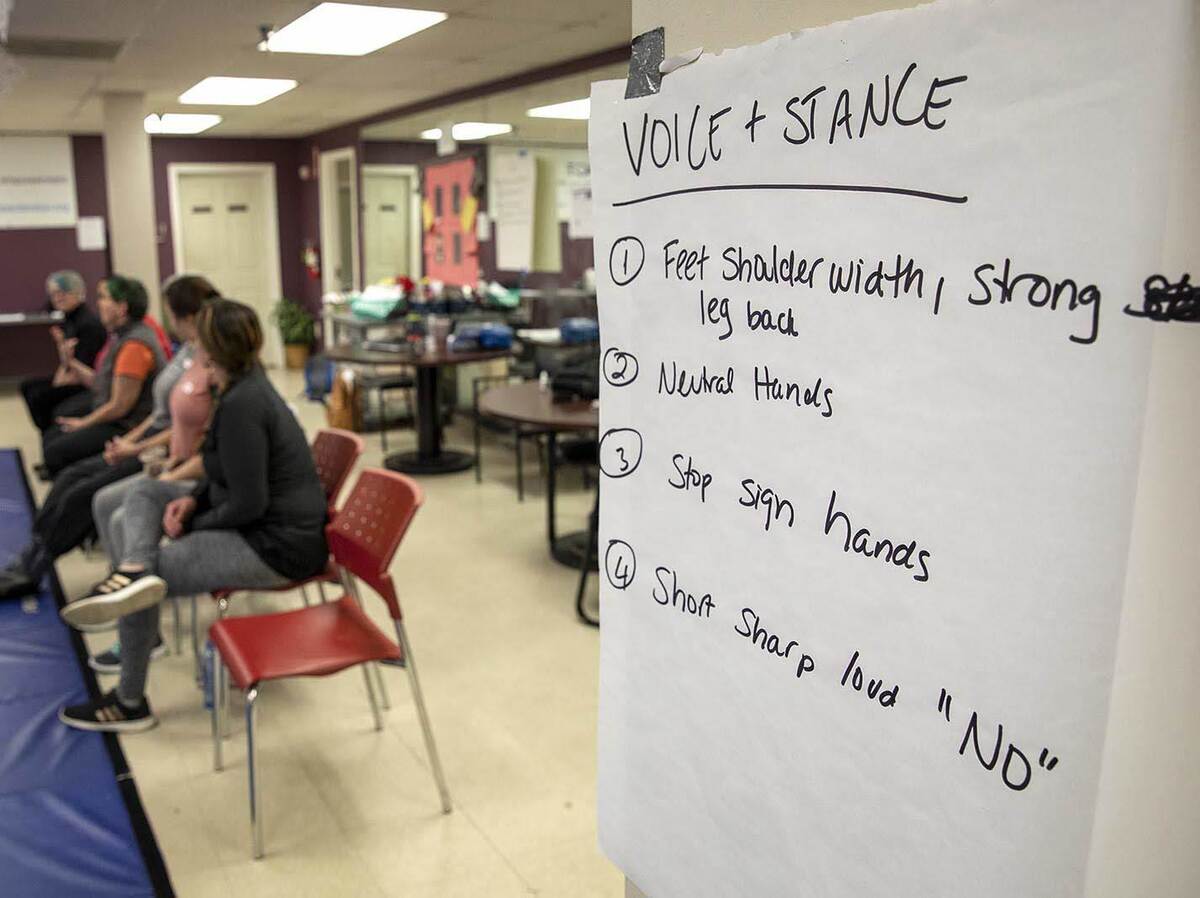 Self-defense notes hang on the walls around the mat at the IMPACT session.

Poitra is a survivor of domestic violence. She took a self-defense class and was able to get out of her situation. Now she wants to help other women from different tribes across the country.

Many who take the hours-long class — such as Kristen Wyman, who teared up while learning the techniques — find it both physically grueling and emotionally taxing.

"Almost as if my ancestors, my aunties, my grandmother — everybody was with me that knows what our women face," she says. "And just to see the power of that, in that scenario, was real."

The class is designed to be taught to Native women, by Native women. And Rachael Devaney told the group that aspect is important to her.

"It is so empowering learning from other Native people. That space is not available to us all the time," she told the group at the end of class. "To feel that kind of empowerment, connecting with you guys in that way is really amazing for me, just as a Native woman."

Native men participate in the class as well. Two of them wear football padding and very reinforced helmets.

Michael Davis of the Turtle Mountain Tribe, whose traditional name is Fire Spirit, said he volunteered because too many Native women have had their "fire" taken away through violence. He has seen it firsthand.

"I have an auntie who could've definitely benefited [from this class]," Davis says. "She might still be alive today if she would've known these tactics, or that she could empower herself to say no, to step away or maybe fought back one time and deterred him and maybe made him think twice."

At the end of class, a song is sung that memorializes the lives of all missing, murdered Indigenous women:

We will always remember you warrior women and leader women. You are in our hearts and minds.

The class itself is a mandate for Native women to keep their fires burning.