Accessibility links
Brexit Day: What To Know When The U.K. Leaves The EU Britain is ending its more than 40-year membership in the European Union. Here are some of the ways Brexit is expected to play out.

Brexit Day: What To Know When The U.K. Leaves The EU

Brexit Day: What To Know When The U.K. Leaves The EU 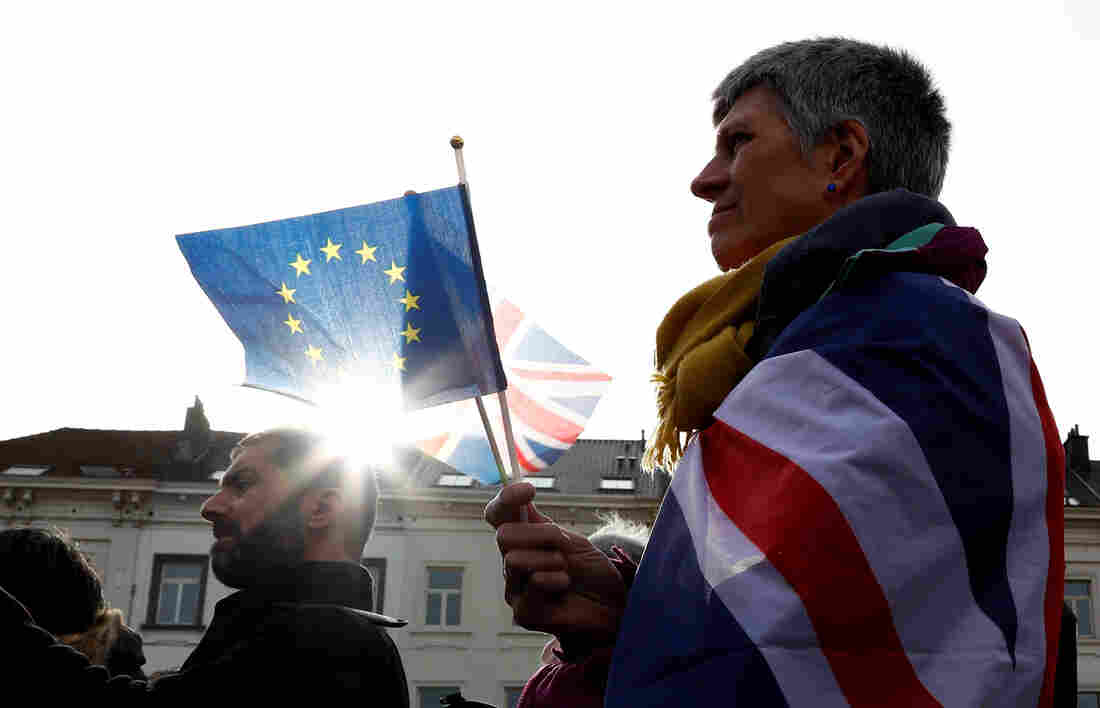 An anti-Brexit demonstrator holds British and European Union flags during a protest in front of the European Parliament in Brussels on Thursday. Francois Lenoir/Reuters hide caption

More than 3 1/2 years after the landmark Brexit referendum, the United Kingdom finally left the European Union at 11 p.m. GMT on Friday.

That means Britain exited the bloc of 27 remaining countries and will begin to forge its own way in the world, but there's a transition period before the U.K. cuts itself off entirely.

The U.K. has been a member of the EU since 1973. Leaving is one of the biggest, riskiest and most divisive steps the country has taken in decades.

Here are some of the ways Brexit is expected to play out in the near term.

What happens on Friday night. Does trade stop? Do EU citizens living in the U.K. and Brits in the EU have to head back to their respective countries?

The Long, Uneasy Wait Is Over: Parties, Protests And Solemn Silence Greet Brexit

No. The U.K. and the European Union will immediately enter a transition period until the end of this year, during which the free movement of people and trade between them will continue as before. There is no expectation of long lines at ports on the English Channel. Britons will no longer be EU citizens, but they will still broadly enjoy the same rights they do now. The U.K. will keep paying into the EU budget during this transition period, but British lawmakers will no longer sit in the European Parliament or help shape EU rules. Next month, British and EU negotiators will begin trying to hammer out a free trade deal to take effect when the transition ends on Dec. 31.

Brexit took a long time. How long will it take for the U.K. to reach a free trade deal with the EU?

British Prime Minister Boris Johnson insists he can get a deal in the next 11 months, but the EU and trade experts are deeply skeptical, given the complexity of such trade negotiations.

There are several scenarios. If the U.K. can't reach a deal, it could crash out of the EU at the end of this year. Trade would default to World Trade Organization terms, which would place tariffs on some goods and cause pain for the British and, to a lesser extent, the EU economies. Johnson could ask to extend the transition period, but he would face opposition within his Conservative Party. He has also vowed never to request an extension again.

It's important to remember that the Brexit process does not end on Friday night. Most analysts say that negotiating a new relationship with the EU will be much harder than leaving it.

This is a huge question, and the answer could have a significant impact on the British economy. U.K. treasury chief Sajid Javid has said that there will be no alignment between British and EU regulations in their new relationship, which economists say would create trade barriers and raise costs, potentially hurting the U.K.'s agriculture and auto sectors, among others. Consider this: Many foreign manufacturers built plants in the U.K. to take advantage of its free trade with the EU. If the country's exports to the EU face tariffs in the future, that might reduce the incentive for foreign companies to invest in the United Kingdom.

The British economy has proved more resilient since the 2016 Brexit vote than many economists expected, but it faces big challenges. The British pound has still not recovered from its sharp drop in value after Britain voted to leave the EU. Unemployment is low, but so is economic growth.

"The fact is that we're hardly growing at all now," said Jonathan Portes, an economics professor at King's College London, who cited troubles with the global and European economies as well as Brexit uncertainty. Portes added that the risks of a recession are "high."

What does Brexit mean for the U.K.'s special relationship with the U.S.? 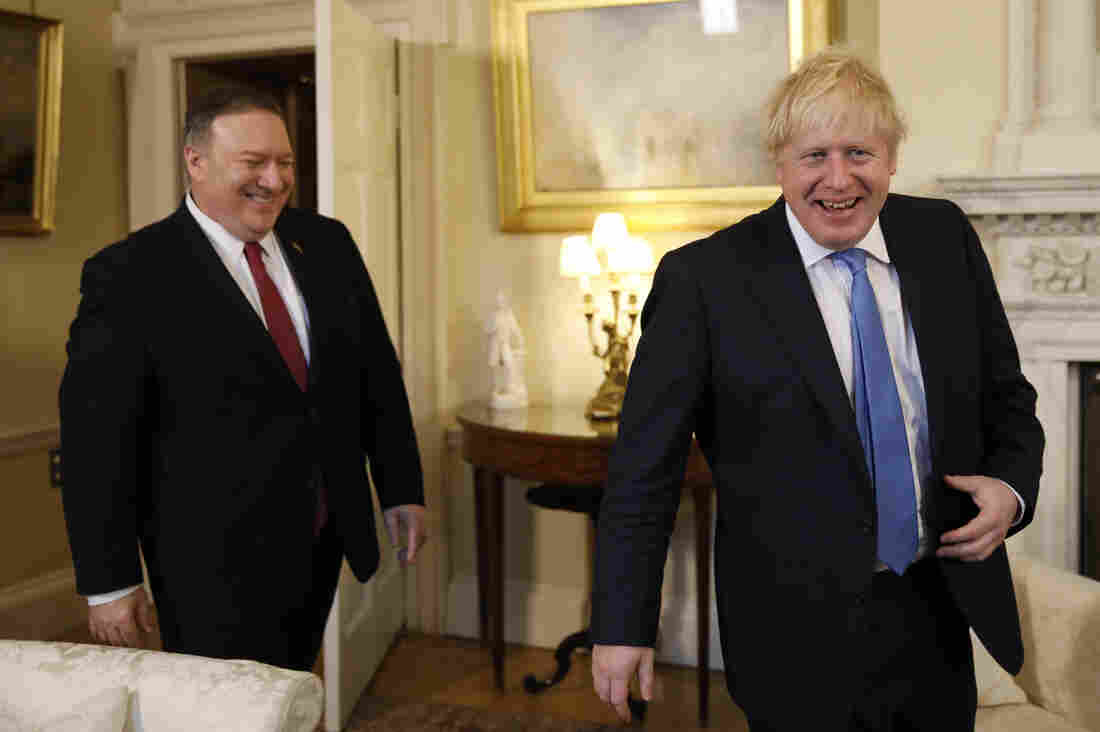 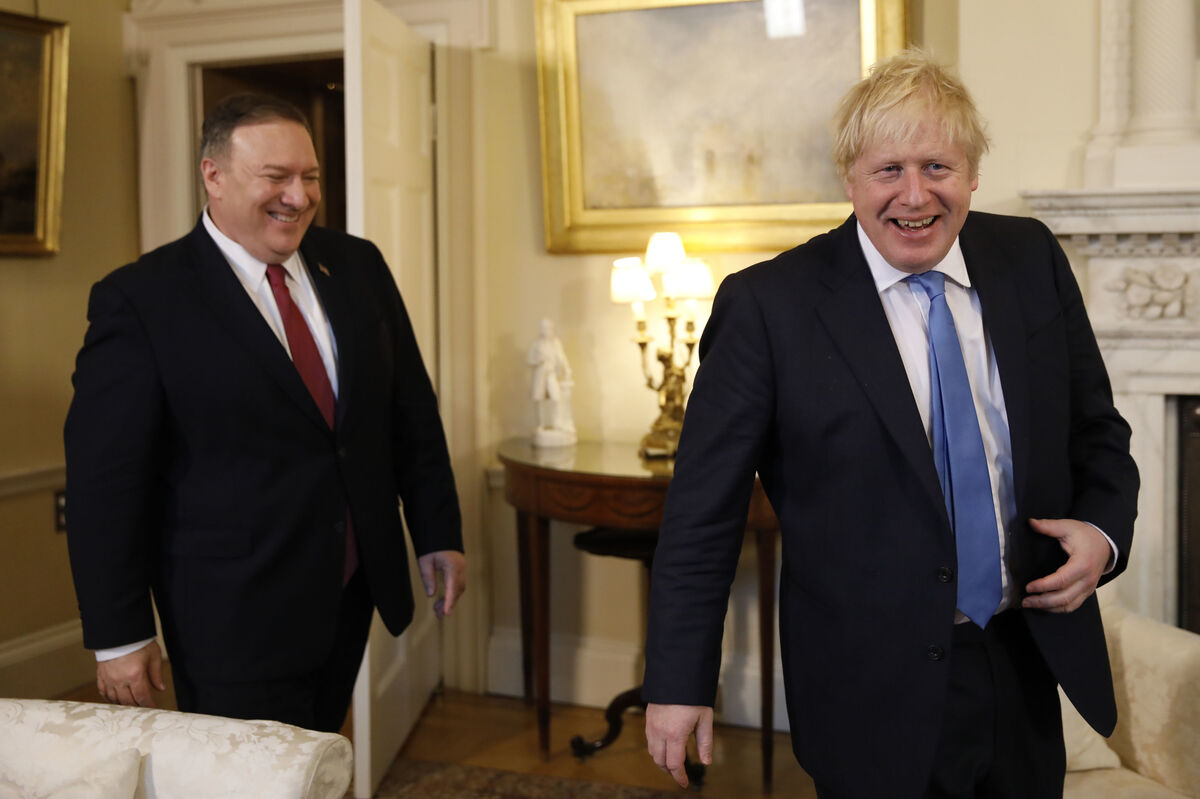 What Conservative U.K. Wins Mean For The U.S.

What Conservative U.K. Wins Mean For The U.S.

Without the leverage that comes from trading as part of a much larger market like the EU, the United Kingdom is anxious to negotiate a good trade deal quickly with the world's largest economy, the United States. President Trump supports Brexit; he criticizes multilateral institutions like the EU. On Thursday in London, U.S. Secretary of State Mike Pompeo said that leaving the EU would free up the U.K. and allow it to reduce transaction costs with the United States. Both Pompeo and U.K. Foreign Secretary Dominic Raab said they thought a deal could be done this year, but trade experts remain skeptical.

Aside from being a longtime ally with shared democratic values, the U.K. has been attractive to the U.S. because it could help America with its agenda in Europe. Once Britain is outside the EU, its influence and therefore its usefulness to Washington are expected to decline.

Brexit strained ties within the United Kingdom. What is the future of Scotland and Northern Ireland?

Scotland voted to stay in the EU, and many there are angry that the U.K. leadership, from their perspective, is dragging them out against their will. Brexit has accelerated discussions in Scotland about breaking away from the U.K. — including the Scottish Parliament's vote this week to hold a new independence referendum. A binding referendum would need the central U.K. government's approval, which Johnson says he won't grant. But if the pro-independence Scottish National Party has a strong showing in next year's Scottish parliamentary elections, independence supporters will press their case even harder.

Brexit has also accelerated talk of an eventual vote on the reunification of the island of Ireland. Although the Republic of Ireland is staying in the EU, Northern Ireland is leaving the EU with the rest of the United Kingdom. The Brexit withdrawal agreement requires customs checks between Great Britain and Northern Ireland, which has infuriated many in Northern Ireland who support remaining a part of the United Kingdom. That said, there are many barriers to Ireland's reunification, including the cost to the Republic of Ireland of absorbing the considerably poorer north. Any change to the status quo is likely many years away.

What are the main lessons from this long Brexit ordeal?

The Brexit vote is part of a much larger trend in parts of the West that values national sovereignty and independence over political and economic integration. Simply put, it's a backlash against a long-running trend toward globalization.

British politicians learned that taking a question as complex as membership in the EU to a public referendum is very risky. The British people have found that unraveling decades of relations with the European Union is far more fraught than anyone imagined. Finally, some Britons have discovered — after years of domestic political chaos and the U.K.'s failure to have its way with Brussels — that their country is nowhere near as politically powerful or as influential as they thought.