Accessibility links
Esports Evangelists Want To Bring Gaming To A Broader Audience Competitive video gaming — esports — has become a global phenomenon with billions in revenue and hundreds of millions of fans. But a divide remains between those who embrace it, and those who don't. 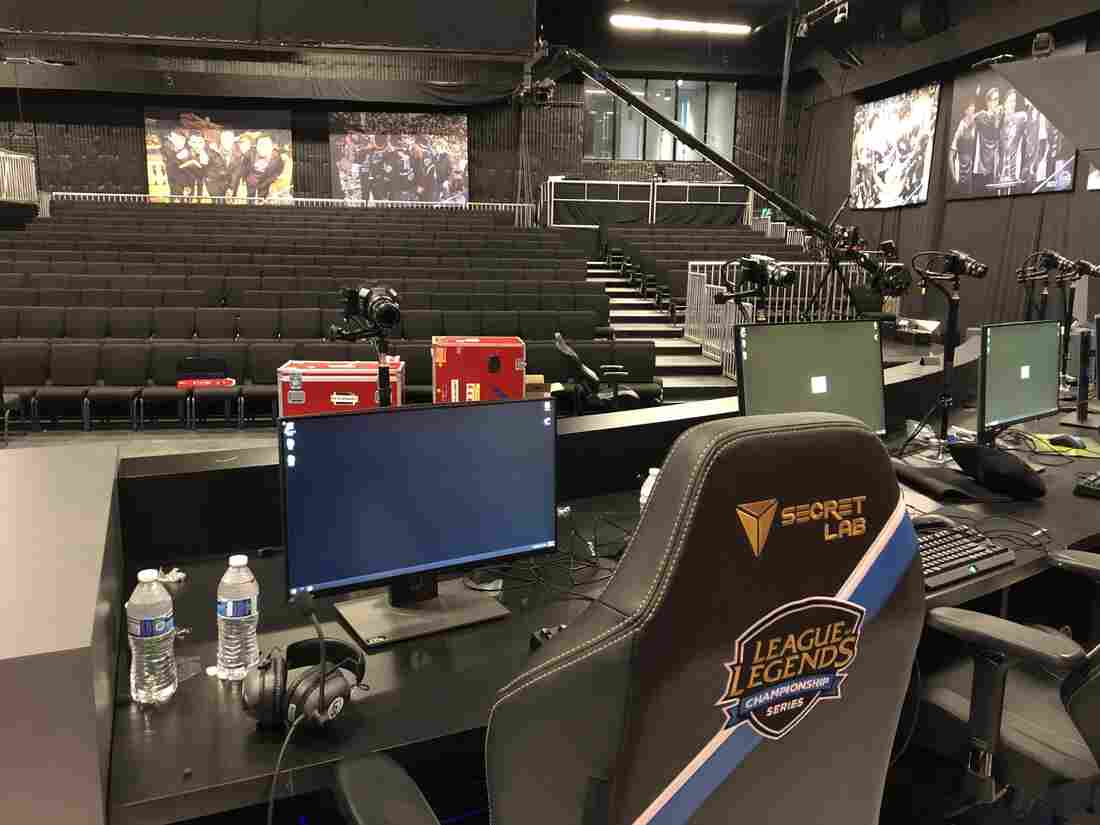 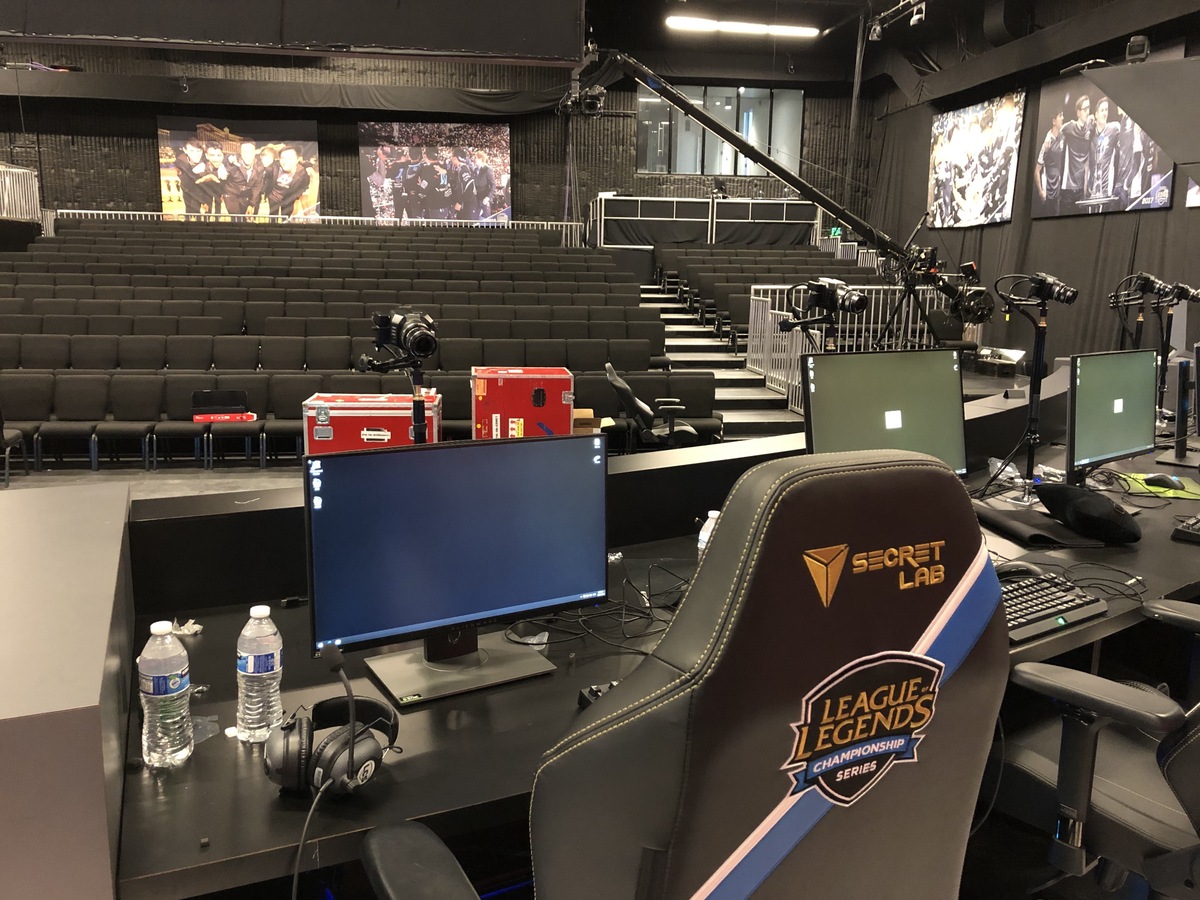 The view from onstage at the Battle Arena in Los Angeles. This is the 375-seat arena that holds regular season games for teams competing in the North American Esports league called the League Championship Series (LCS). The 10 teams in the LCS play League of Legends, Esports' most popular videogame.

For all its recent success, Esports still has a bit of a problem.

In less than a decade, competitive video gaming has become a global phenomenon with multi-billions in revenue and hundreds of millions of fans.

But for all who embrace Esports, there are those who remain on the outside.

This is a thing?

How big is Esports? Big enough to poke fun at. A recent Saturday Night Live comedy sketch featured Chance the Rapper as a fish-out-of-water Esport reporter.

"In a nutshell," he says in the skit, describing an Esports competition, "there are 10 nerdy dudes, sitting down at computers with headsets on, while 20,000 people scream like they were watching the Beatles.

"I did not know this was a thing."

"My wife and I watched together," Greeley says. "I laughed through the whole thing. All in good fun and very funny."

Greeley knows there's truth in humor, meaning the show's not too far off with its portrayal of Esports as a sometimes confusing world, dominated by players and fans who are young, white, Asian and male.

"I think five years ago, that stereotype was probably a lot more true than it is today," Greeley says, adding, "but we're not out of the woods in terms of that yet."

Trying to reach the mainstream

To the uninitiated, an Esports practice session is a bit bewildering.

On a recent day in Santa Monica — Los Angeles is the epicenter of North American Esports — five players sit in front of computer screens, calling out moves on headset microphones, simultaneously clicking on a mouse and tapping with a rat-a-tat pace on a keyboard. The colorful, fantasy-like figures on the screens advance, retreat and engage in battle. The game is said to be a mashup of four-dimensional chess and capture the flag.

The competitors play for Team Liquid, one of 10 teams in the LCS and the winner of the last four North American League of Legends championships.

Players like these earn on average $300,000 a year. They are paid, in part, for their computer-like minds.

"When I take in information, I can process it and apply a lot faster than most people," says Yiliang Peng, Team Liquid's star player.

His gamer tag, or Esport nickname, is Doublelift. He explains how he got it.

"In high school, I was hella nerd with no friends," Peng says. "So I wanted to do magic tricks to impress girls. The doublelift is the most basic slight of hand that you can do with card tricks. It didn't work [with girls] by the way. But I thought it was a cool [Esports] name."

The one-time high school nerd is now a 26-year-old Esports superstar. He's won seven North American titles, including the four with Team Liquid. He earns seven figures a year and has lots of fans.

And what about reaching the non-fans?

"I'm not going to be like this evangelist for Esports," he says, "where I think everyone should be into [competitive video gaming]. I don't want to force the mainstream audience to absorb Esports and care about it. But, like, maybe you should check it out once or twice. It could be possible for a mainstream audience to like Esports a little more."

It is possible and some in the mainstream are doing more than checking it out.

We want to win here, too

In the last few years, there's been a surge in Esports investment, by traditional sports teams and leagues, celebrities and others. LCS Commissioner Greeley says it's not hard to understand why.

"Part of it for them is we hit a really attractive demographic," Greeley says. "The majority of our fans are between 18 and 34. When you look at viewership amongst that demographic across all sports leagues in the U.S., we're third, only behind the NBA and NFL."

"So there are more 18- to 34-year-olds watching League of Legends on a week-to-week basis than are watching golf or hockey or baseball. And I think a lot of conventional sports look and see their demographic tends to be aging. And that ours trends a lot younger." 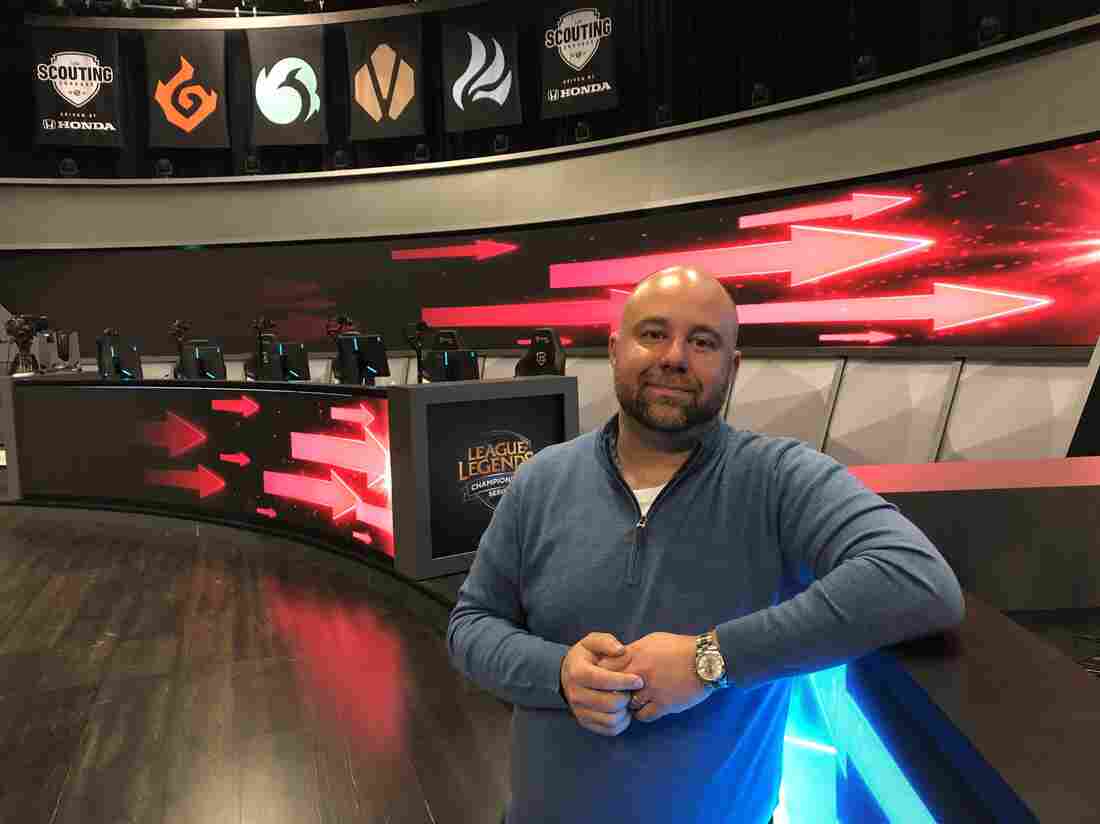 Esports Commissioner Chris Greeley in the League of Legends Battle Arena, in Los Angeles. This is where the regular season games take place. It seats about 375 people. Greeley has been Commissioner of the League Championship Series (LCS) for the past two years. The LCS is the North American Esports league overseeing 10 teams that play the most popular Esport videogame, League of Legends. Tom Goldman/NPR hide caption 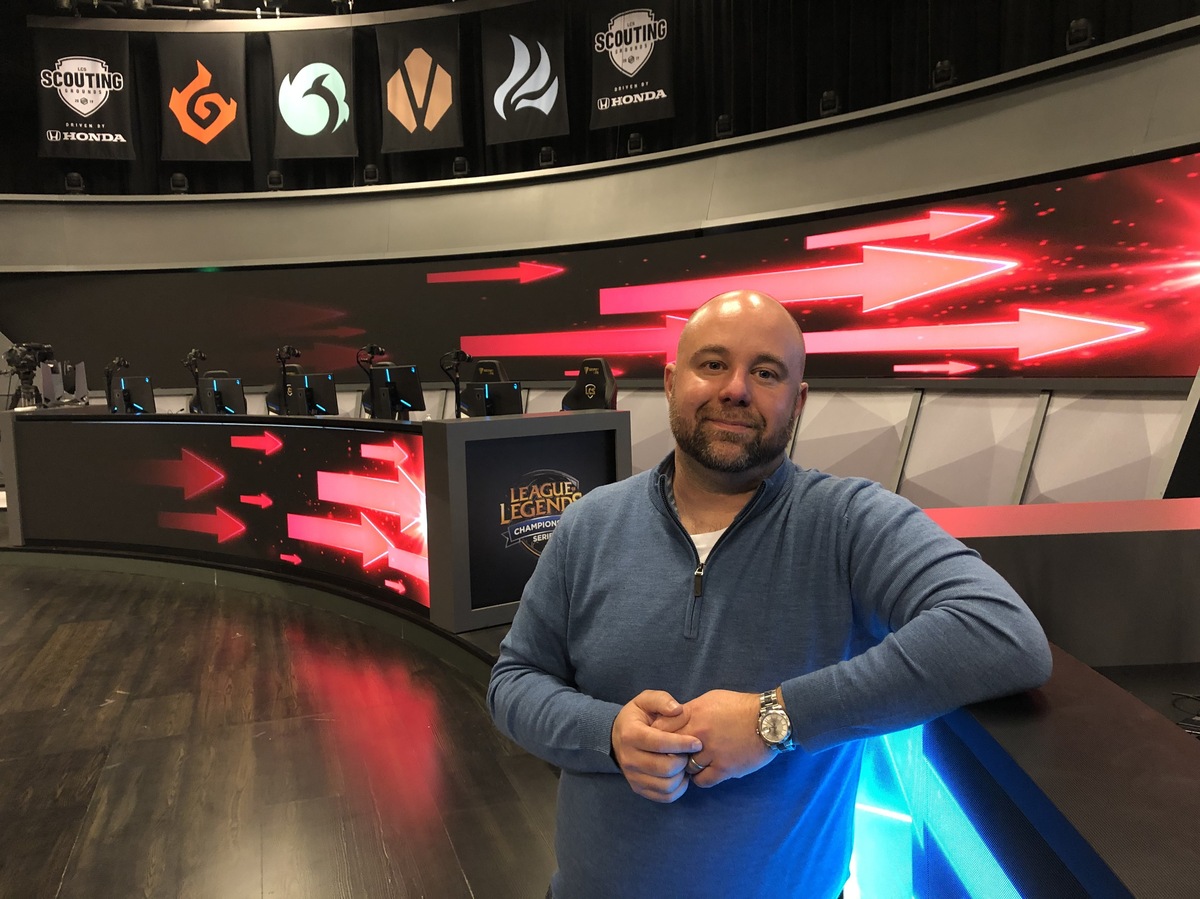 Esports Commissioner Chris Greeley in the League of Legends Battle Arena, in Los Angeles. This is where the regular season games take place. It seats about 375 people. Greeley has been Commissioner of the League Championship Series (LCS) for the past two years. The LCS is the North American Esports league overseeing 10 teams that play the most popular Esport videogame, League of Legends.

The NBA has been particularly proactive with Esports.

"I think [NBA Commissioner] Adam Silver was way out in front," says Greeley, "telling people [Esports] was going to be the next frontier we should be looking at. We should look at it early and often."

Greeley says as a result, there are NBA owners in almost all LCS team ownership groups.

"I ask this question of everyone who's a potential investor," Arhancet says, "which is why do you want to do this? And I remember he said, 'I want to win here too.'"

Guber invested in aXiomatic Gaming, the majority owner of Team Liquid. So did NBA legend Michael Jordan, to the tune of $26 million.

Not just an age thing

Still, gaps exist between those who're going all in on Esports, and those who are all out.

There's a generation gap, for sure. A wariness among some older people about anything computer and technology-related. But for those older mainstreamers who may want to close the gap? Help is on the way.

"We have a responsibility to bring gaming to as broad an audience as possible," says Ben Kusin.

He and his co-founder Ariel Horn — for the record both in their early 40's — plan to launch a new TV network this August called VENN. The Videogame Entertainment and News Network will include Esports 101 programming.

"We're creating a morning programming block that's essentially an introduction to various Esports," says Kusin, adding, "and it's not just an age thing. You'll still find people with Gen-Z, millennial and older, that want to learn more about gaming."

"We're inspired by MTV in the 1990's," he says, "a place where you could look in and see popular culture unfolding. MTV used music as a lens into pop culture. We think gaming is that transcendent, binding force." 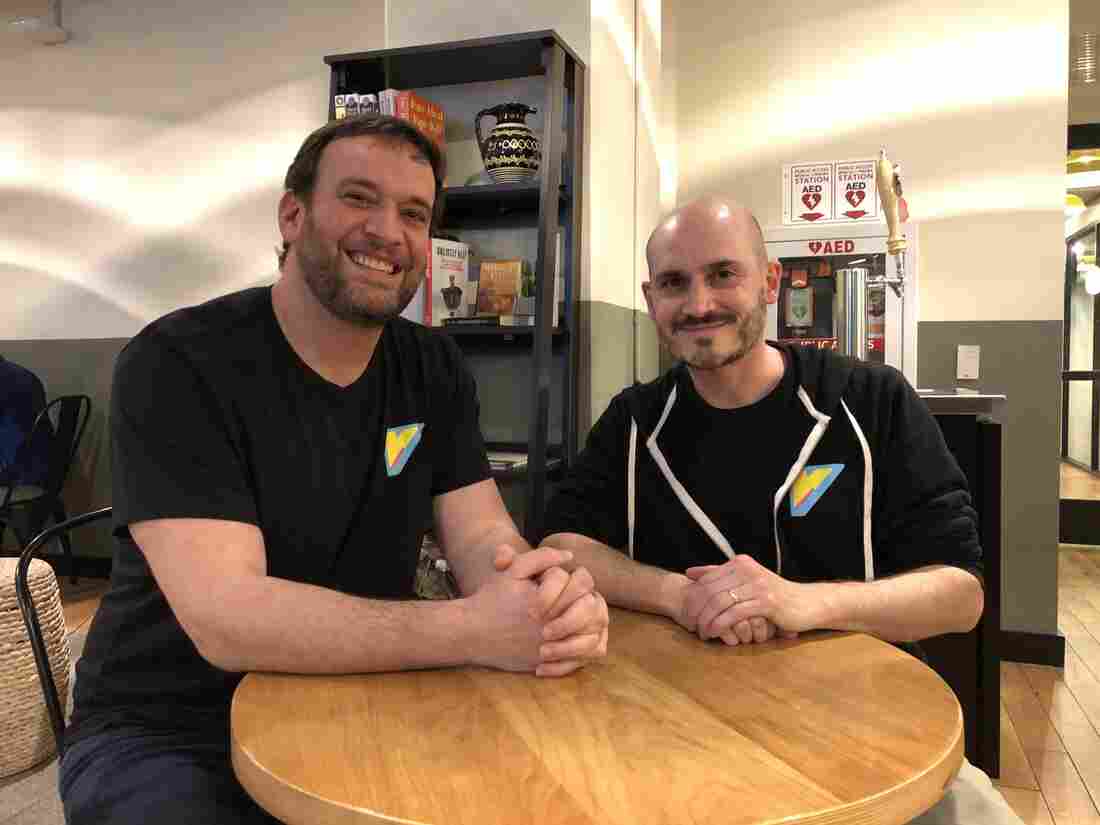 Ben Kusin (left) and Ariel Horn are co-founders of a new gaming-themed TV network called VENN. They plan to launch the Videogame Entertainment and News Network in August. Horn says they were inspired by MTV from the 1990's, which used music as a lens into pop culture. The want to use gaming to do the same. Tom Goldman/NPR hide caption 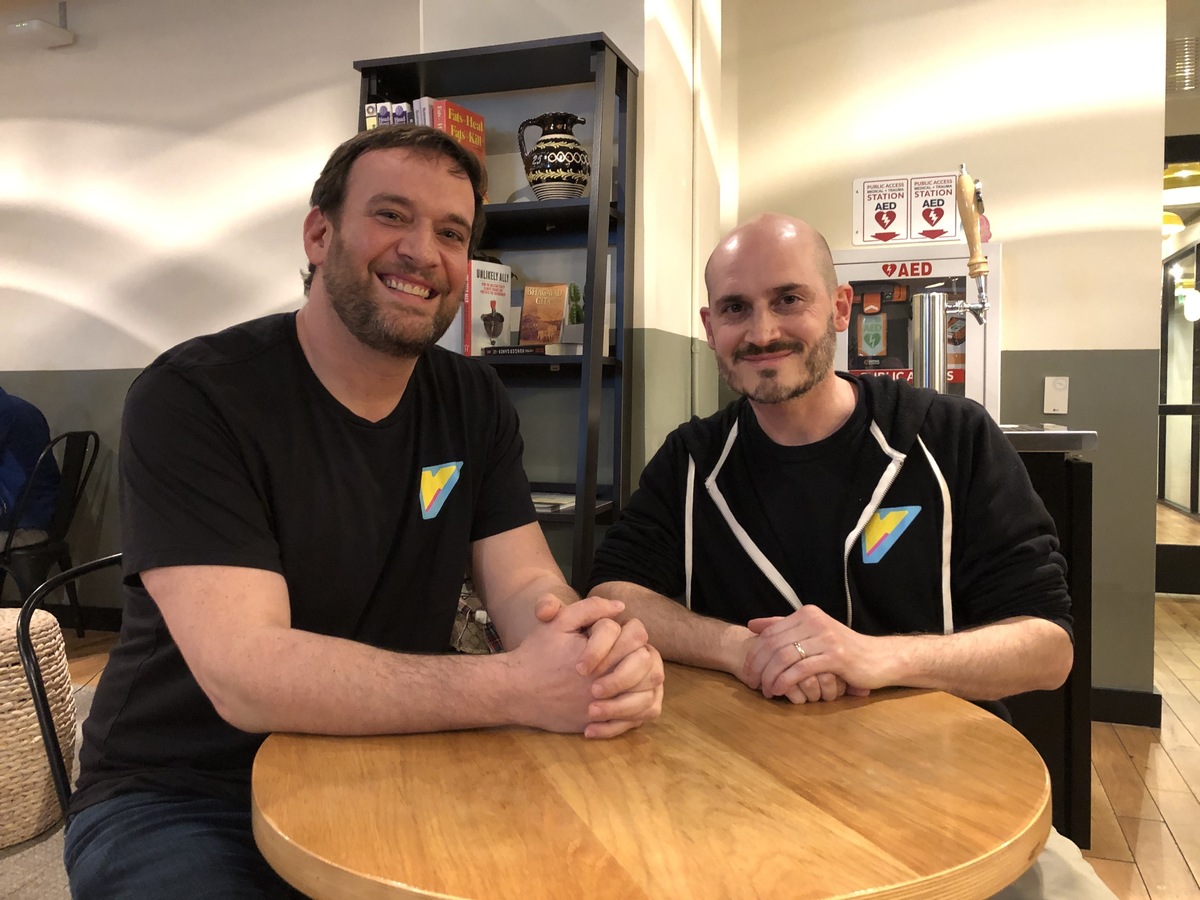 Ben Kusin (left) and Ariel Horn are co-founders of a new gaming-themed TV network called VENN. They plan to launch the Videogame Entertainment and News Network in August. Horn says they were inspired by MTV from the 1990's, which used music as a lens into pop culture. The want to use gaming to do the same.

Another gap is women's participation in Esports.

Chris Greeley says while on the amateur scene there are definitely women in the highest level of play in competitive gaming, his league currently doesn't have any female players at the professional and semi-pro levels.

"[It's] hard to say," Greeley says. "We're spending a lot of time with some of our high ranking women players, trying to get an understanding of, do you want to be pro? If you do and you're not making that step, what are the barriers there and how can we help remove those barriers so that you can pursue the passion you have, on a professional level."

Tricia Sugita has been able to pursue her Esports passion, to the highest level of management. She was recently named CEO of the LCS team Flyquest. She's one of two women to run an LCS team.

Sugita notes women should be able to play high level Esports as well as men.

"The physical barrier that usually creates disproportionality is almost non-existent," she says. "Muscle mass, vertical leap, things like that don't really mean much in League of Legends.

"Unfortunately, there's worse stigma for female gamers than for male gamers. Female gamers, as a general concept, are somehow still seen as uncommon or odd. There may be pressure coming from friends, family and even the gaming community at large."

Sugita, 34, says she never felt weird playing videogames until she got older.

"When I was in college, I met so many people and they were astonished that I played Starcraft 1. The good thing was, though, when they called me out and [said] 'you play?' I beat them all."

In her new role, running an LCS team, Sugita is trying to do what she can to get more girls and women involved in Esports. She ways Esports merchandise traditionally has included unisex clothing like tee shirts and hoodies. She's introduced clothes specifically for women.

"We did a whole line that were crop-tops, leggings, sports bras," she says, "and really embraced this female [merchandise] line. And to really show people, look if you want to game and dress like this, that's awesome. And we want to create those opportunities. If you don't feel comfortable doing it, that's ok too. But the main thing we wanted to do is create more options for women."

Those inside the Esports tent say it's a big one with room for everyone.

"My wife will take out her phone and play a game while she passes the time," Greeley says, "while she's on a train or bus or airplane. But if I tell her she's a gamer, she always steps back and says wait a minute. I'm not you. I'm just playing Candy Crush on my phone."

True, she doesn't sit in front of a computer, in a comfy gaming chair, talking to people on a headset.

Yet. There's still time. And a booming Esports world around her.